Breakfast cereal is one of the most popular foods in the world and is enjoyed by hundreds of millions daily. But like many staples of our diet, it is not nearly as old as you might think.

The first breakfast cereal was invented in 1863. Called Granula, it never became popular because the bran nuggets had to be soaked overnight to be chewable. Today, there is a kaleidoscopic variety of cereals available, often encompassing entire aisles of supermarkets. The business is huge and continues to grow; cereals boast a huge profit margin and a huge customer base encompassing everyone from sugar-crazed kids to health-conscious vegans. It’s all about the breakfast. 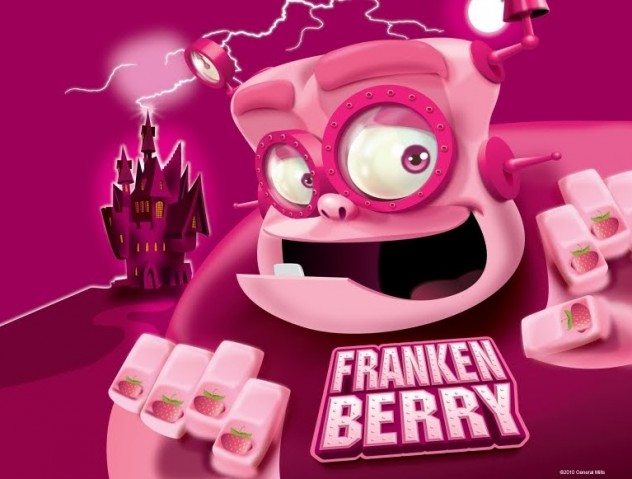 In 1971, General Mills debuted two monster-themed cereals: the sickeningly sweet Count Chocula and its strawberry equivalent, Franken Berry. Later cereals in this vein would include Boo Berry, Fruit Brute, and the unfortunately named Fruity Yummy Mummy. The line would prove extremely profitable, but in 1972, General Mills faced a public relations disaster. The dye they used to make Franken Berry pink often was not absorbed by the digestive system. Terrified parents found their children’s poop stained a garish pink and rushed them to the emergency room, fearing internal bleeding. The condition, called “Franken Berry Stool” was thankfully quite benign. The offending dye has long since been discontinued. Today, Franken Berry, Count Chocula, and Boo Berry are only available for a few months around Halloween time. 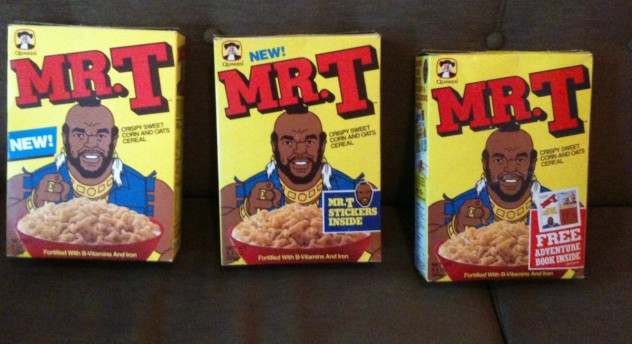 More than any other product, cereal relies upon the whim of children. Kids, most of whom would live on chicken nuggets if they were allowed to, hardly possess the palates of cultured food critics. The recipe for success is quite simple—make it sweet and team it up with something popular. This formula has led to a plethora of forgettable cereals, including Mr. T Cereal (capitalizing on the success of T’s roles in Rocky III and The A-Team). Even Family Matters uber-nerd Steve Urkel had a brand.

Perhaps not surprisingly, many of these rare vintage cereal boxes have become collector’s items, trading on websites like eBay for many hundreds of dollars. Among the most valuable are those portraying athletes like Michael Jordan and Mickey Mantle. 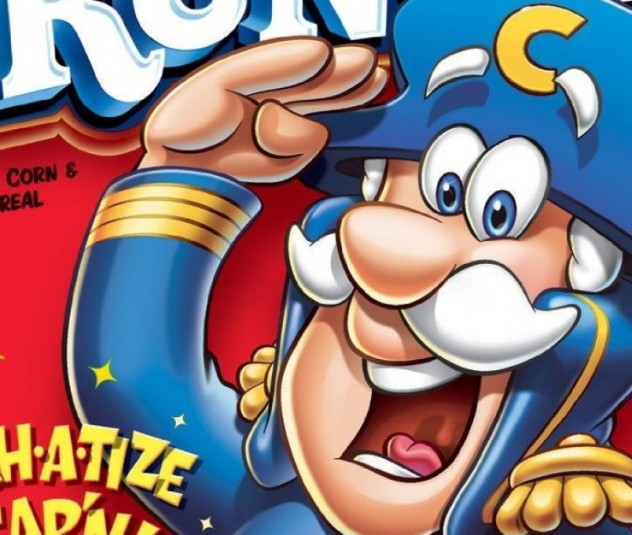 A word on the Cap’n: His full name is Horatio Magellan Crunch, and he was born on Crunch Island in the Sea of Milk. In 2013, a food blogger noticed a scandalous disparity on Cap’s uniform. His sleeves only sported three yellow stripes instead of four, making him technically a Commander in the Navy, a position one rung below a Captain. When the disgrace was revealed, Cap’n Crunch immediately headed to Twitter to defend his position, claiming “All hearsay and misunderstandings! I captain the S.S. Guppy with my crew—which makes an official Cap’n in any book!” and “Of course I’m a Cap’n! It’s the Crunch—not the clothes—that make a man.” 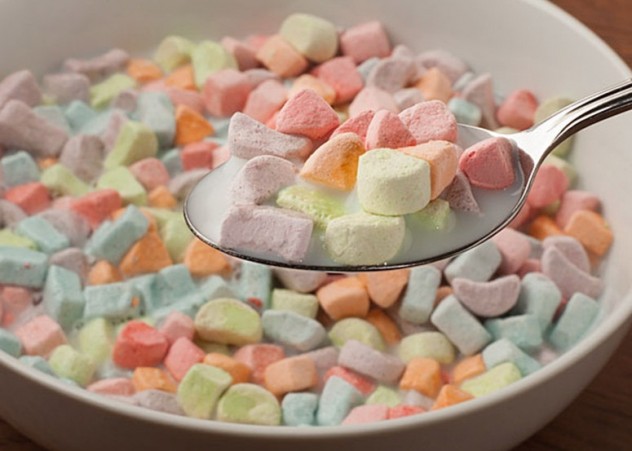 Cereal would seem like a perfect food for vegans (provided it isn’t served with milk), but there are actually a large number of cereals that use animal-based ingredients. Vitamin D3, found in many cereals, is generally derived from the lanolin of sheep. Many cereals that contain marshmallows, like Lucky Charms, use gelatin. The gelatin comes from the bone, cartilage, tendons, and skin of pigs. Many cereals also include dairy ingredients, and vegans consider the description “natural flavoring” to be quite dubious. 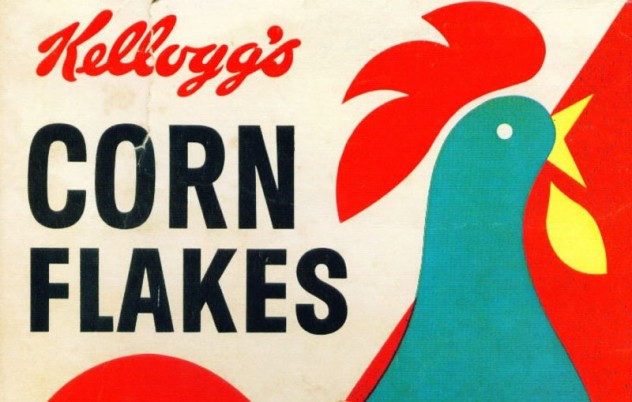 The rise of the Kellogg empire could easily comprise a list of its own. The short version begins with John Harvey Kellogg, who was trained as a doctor and promoted a vegetarian lifestyle in accordance with his Seventh Day Adventist beliefs. But Kellogg took the restrictive Victorian conventions of the day and threw them out the window.

Among other weird practices, Kellogg espoused the constant administration of enemas. After your enema, you’d be treated to a pint of yogurt. The patient was allowed to eat half of the yogurt, but the other half would go straight up the patient’s rectum, ostensibly to replenish the bacterial levels of the digestive tract.

Of course, J.H. Kellogg’s greatest contribution to society is the corn flakes he distributed with his brother William. Some years after founding the Sanitas Food Company, the two brothers would butt heads on the issue of whether to add sugar to the cereal. Will would go on to found the company that would later become Kellogg. Sugar has since been an integral ingredient of the company’s success in the peddling of such products as Frosted Flakes and Pop Tarts. A highly fictionalized account of John Harvey Kellogg’s life can be found in T.C. Boyle’s novel The Road to Wellville. 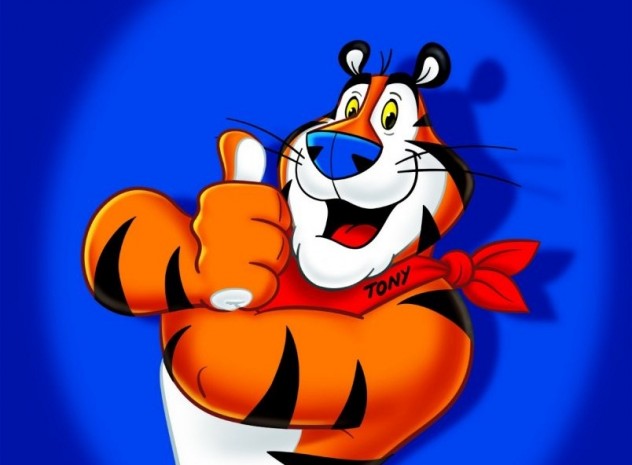 Cereal mascots generally fall into one of two categories. The first is the traditional salesman espousing the quality of the product. Examples would include Cap’n Crunch, Sugar Bear, and Tony the Tiger (voiced for five decades by Thurl Ravenscroft, who sang “You’re a Mean One, Mr. Grinch” in the animated Dr. Seuss Christmas classic).

The second group is infinitely more pathetic: those with some kind of deep-seated pathological addiction to a cereal that is always held just beyond their grasp. Examples of this sorry lot would include Barney Rubble (constantly trying to pilfer neighbor Fred Flinstone’s Fruity Pebbles), Sonny the Cuckoo Bird, and of course, the Trix Rabbit.

The Trix Rabbit is perhaps the world’s most profound cereal junkie. His schemes to obtain Trix were baroque and desperate, invariably ending in failure. Sociopathic children would inform him in his defeat that “Trix are for kids.” Mail-in “Let the Rabbit Eat Trix” campaigns held in 1976 and 1980 redeemed the world’s youth when they voted in a landslide to give the rabbit some Trix. 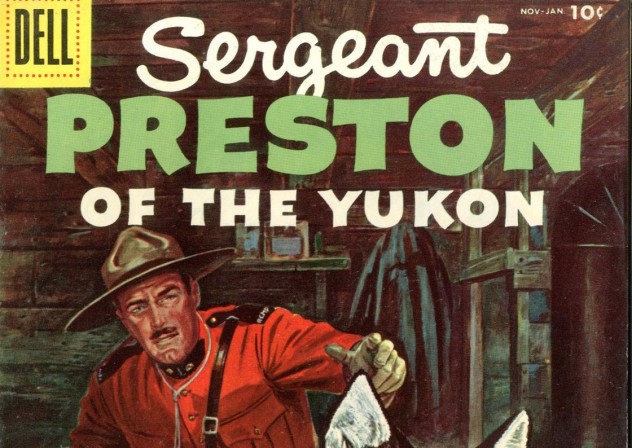 In the 1950s, CBS’s hit show Sergeant Preston of the Yukon was sponsored by Quaker Oats. Bruce Baker, a Chicago ad executive, was charged with creating a promotion that would link the two together. Rather than dumping a toy Mountie into a box of cereal, Baker had a truly novel idea. Quaker would give a deed for one square inch of Yukon Territory in exchange for a box top from their cereal. The promotion was far more successful than anyone could have anticipated, and Quaker flew through 21 million deeds in just weeks.

The deeds said: “Witnesseth that the Grantor for good and valuable consideration now paid by the Grantee to the Grantor (the receipt whereof is hereby by it acknowledged) doth grant, bargain, sell, alien, enfeoff, release, remise, convey and confirm unto the Grantee, his heirs and assigns forever and estate in fee simple.” They featured a corporate seal and a line for the new landowner to sign his name. Although people continue to write in to the company to check on their land, the territory Quaker purchased was reverted back to the Canadian government in 1965. The leftover deeds are readily available; you can purchase one on eBay for around $25. 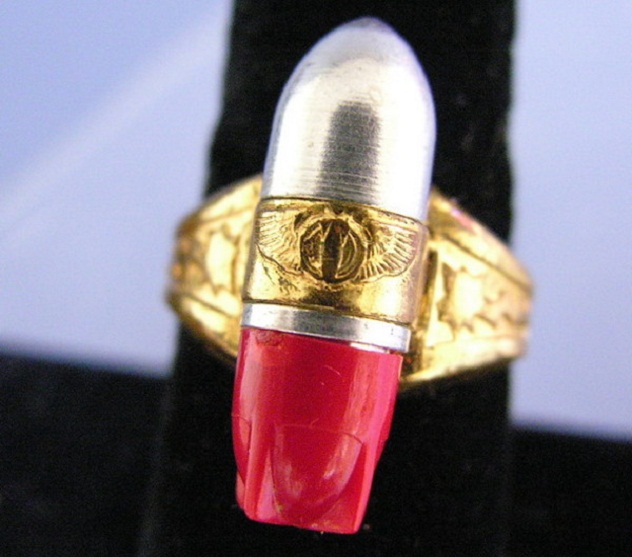 In 1947, Kix cereal capitalized on the newfound recognition of atomic technology. Where other cereals were distributing lame toys like whistles and tops, Kix released a silver bullet Lone Ranger ring. Available for 15 cents plus a box top, the ring contained trace amounts of radioactive polonium which would glow when it struck a screen made of zinc sulfide. Although this might sound dubious, the instructions indicated the ring was completely safe. They said: “PERFECTLY SAFE—We guarantee you can wear the KIX Atomic ‘Bomb’ Ring with complete safety. The atomic materials inside the ring are harmless.”

Unfortunately, the polonium inside the rings had a short life and none of them work today. Like the Yukon deeds, these are easily available for purchase online. 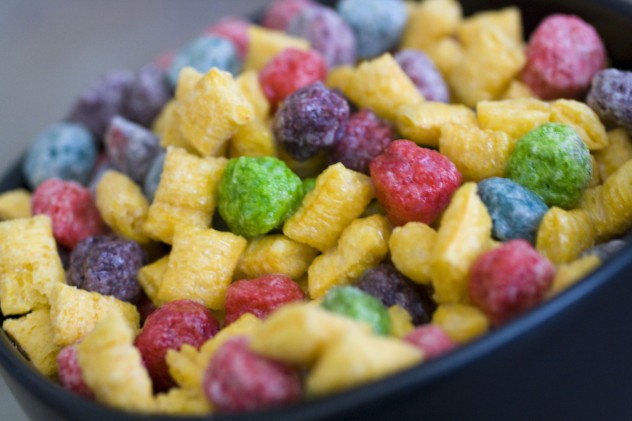 Nature has provided us with a marvelous array of berries, including bananas, pumpkins, watermelons, and tomatoes. (Read that sentence again, slowly. Yeah, it’s true.) Crunch Berries are not one of them. In 2009, a California woman named Janine Sugawara filed a class-action lawsuit against PepsiCo, the parent company of Quaker, which makes Cap’n Crunch’s Crunch Berries. Sugawara claimed she had been duped into buying the product for four years due to misleading advertising claiming that the Crunch Berries were real fruit. Sacramento judge Morrison England quickly dismissed the frivolous suit, writing, “As far as this court has been made aware, there is no such fruit (Crunch Berries) growing in the wild or occurring naturally in any part of the world.” 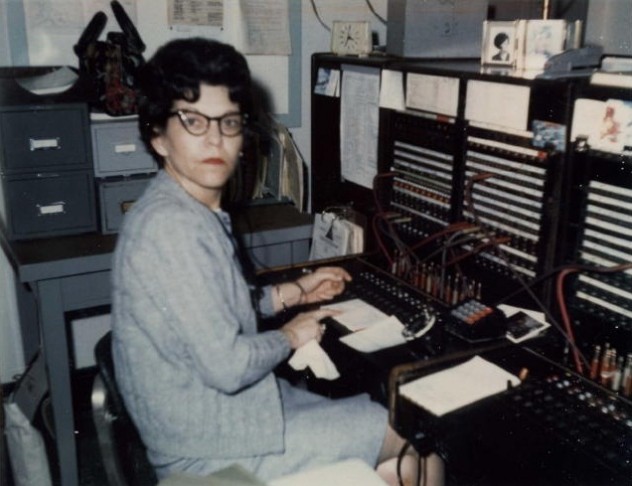 The son of an Air Force engineer, John Draper enlisted in the USAF in 1964 and promptly put his technical skills to work by hacking into a telephone switchboard and allowing his friends to make free phone calls. Perhaps best defined as “eccentric,” Draper spent the next few years operating a pirate radio station from his van. His greatest claim to fame would come when he learned that the whistle given away in a box of Cap’n Crunch would make a tone that would give him operator’s control over phone lines. Blind friends of his had learned that by taping the hole of the whistle shut, they could duplicate the tone AT&T ran on.

After being featured in an 1971 Esquire article, the “phone phreaker” (nicknamed “Cap’n Crunch”) was arrested and sentenced to probation. He has since served time in jail for manipulating phone systems (he once claimed that his skills allowed him to call President Nixon directly) and even worked briefly with Steve Jobs and Steve Wozniak developing software during the early days of Apple. Today, Draper continues to do programming work and even runs his own website.