Samurai are legendary warriors and perhaps the most well-known class of people in ancient Japan. They were noble fighters that fought evil (and each other) with their swords and frightening armor, following a strict moral code that governed their entire life.

That’s the popular idea, anyway. In reality, there’s much more to the samurai . . . 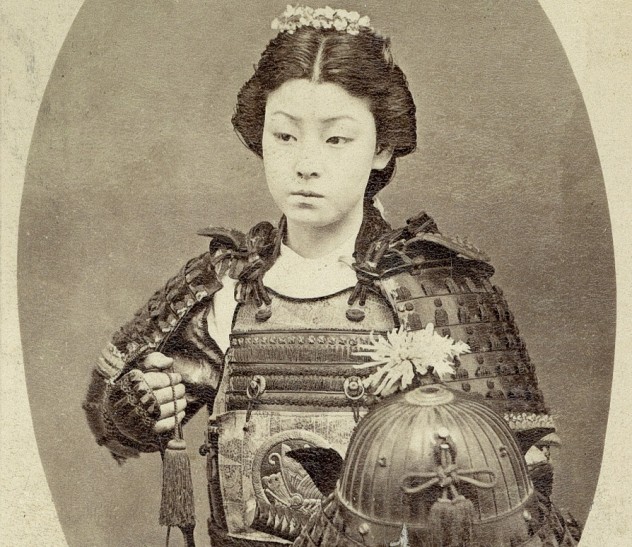 While “samurai” is a strictly masculine term, the Japanese bushi class (the social class samurai came from) did feature women who received similar training in martial arts and strategy. These women were called “Onna-Bugeisha,” and they were known to participate in combat along with their male counterparts. Their weapon of choice was usually the naginata, a spear with a curved, sword-like blade that was versatile, yet relatively light.

Since historical texts offer relatively few accounts of these female warriors (the traditional role of a Japanese noblewoman was more of a homemaker), we used to assume they were just a tiny minority. However, recent research indicates that Japanese women participated in battles quite a lot more often than history books admit. When remains from the site of the Battle of Senbon Matsubaru in 1580 were DNA-tested, 35 out of 105 bodies were female. Research on other sites has yielded similar results. 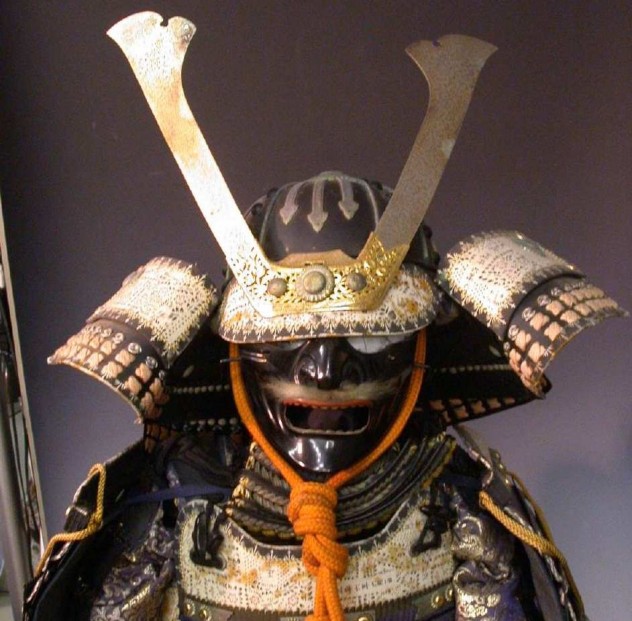 The strangest thing about the samurai is probably their weird-looking, ornate armor. However, each piece of it was functional. The samurai armor, unlike the armor worn by European knights, was always designed for mobility. A good suit of armor had to be sturdy, yet flexible enough to allow its wearer free movement in the battlefield. The armor was made of lacquered plates of either leather or metal, carefully bound together by laces of leather or silk. The arms were protected by large, rectangular shoulder shields and light, armored sleeves. The right hand was often left without a sleeve to allow maximum movement.

The strangest and most convoluted part of the armor, the kabuto helmet, also served its purpose. Its bowl was made of riveted metal plates, while the face and brow were protected by a piece of armor that tied around behind the head and under the helmet. The most famous feature of the helmet was its Darth Vader–like neck guard (Darth Vader’s design was actually influenced by samurai helmets). It defended the wearer from arrows and swords coming from all angles. Many helmets also featured ornaments and attachable pieces, including a mustachioed, demonic mengu mask that both protected the face and frightened the enemy. A leather cap worn underneath the helmet provided much-needed padding.

Although the samurai armor went through significant changes over time, its overall look always remained fairly consistent to the untrained eye. It was so well-made and effective that the US Army actually based the first modern flak jackets on samurai armor. 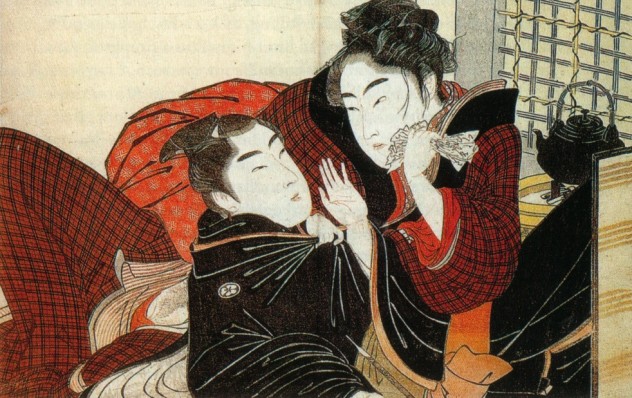 Not many people know that samurai were extremely open-minded when it comes to sexual relations. Much like the Spartans, another warrior culture, the samurai not only accepted the presence of same-sex relations in their culture—they actively encouraged them. These relationships were generally formed between an experienced samurai and a youth he was training (again, very much like the Spartans). The practice was known as wakashudo (“the way of the youth”), and it was reportedly done by all members of the class. In fact, wakashudo was such a common thing that a daimyo might have faced some embarrassing questions if he didn’t engage in it.

Although wakashudo was considered a fundamental aspect of the way of the samurai, history has kept relatively quiet about it. Pop culture depictions of samurai, ushered in by director Akira Kurosawa and his trusted actor Toshiro Mifune, have never addressed this fact either. 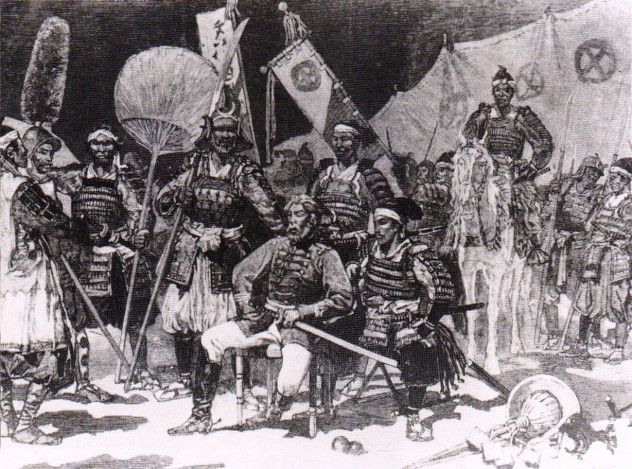 Readers who have seen the movie The Last Samurai might know that under special circumstances, someone outside Japan could fight alongside the samurai, and even become one himself. This special honor (which included samurai weapons and a new, Japanese name) could only be bestowed by powerful leaders, such as daimyos (territorial lords) or the shogun (warlord) himself.

History knows four Western men who have been granted the dignity of the samurai: adventurer William Adams, his colleague Jan Joosten van Lodensteijn, Navy officer Eugene Collache, and arms dealer Edward Schnell. Out of the four, Adams was the first and the most influential: he served as a bannerman and advisor to the Shogun himself. Amusingly, neither of the people Tom Cruise’s Last Samurai character was based on (Frederick Townsend Ward and Jules Brunet) were ever made samurai. 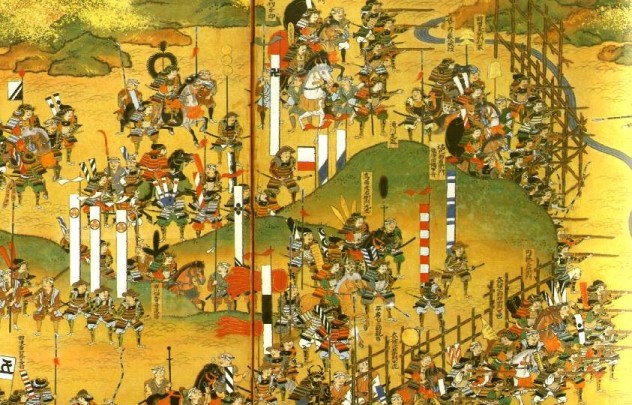 Many people think the samurai were either a rare elite force (much like Navy SEALS or the Russian Spetznaz today) or a small, tightly defined caste of noblemen. However, they were actually an entire social class. Originally, “samurai” meant “those who serve in close attendance to the nobility.” In time, the term evolved and became associated with the bushi class, middle- and upper-tier soldiers in particular.

This means there were quite a lot more of these mighty warriors than we generally assume. In fact, at the peak of their power, up to 10 percent of Japan’s population was samurai. Because of their large numbers and long influence in Japan’s history, every single Japanese person living today is said to have at least some samurai blood in them. 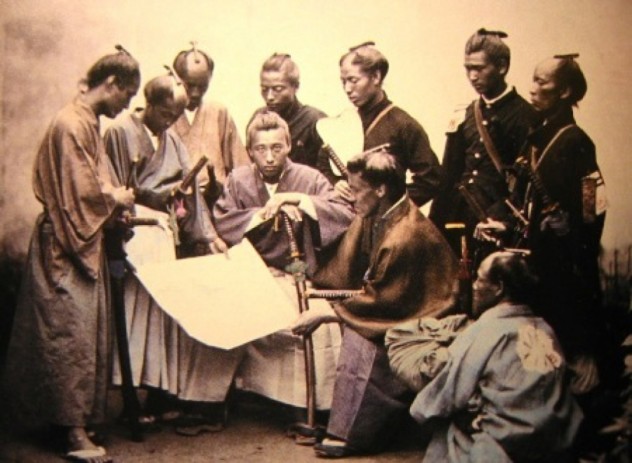 Samurai were the rock stars of their time and their style of clothing massively influenced the fashion of the era. However, save for the most formal occasions, samurai themselves didn’t dress to impress. Although their clothing was elaborate, every aspect of it was designed to fit their needs as warriors.

Samurai dressed for speed, travel, and freedom of movement. Their regular outfit consisted of wide hakama trousers and a kimono or a hitatare, a two-part vest with imposing shoulder points. The costume left the arms free, and the hitatare vest could quickly be removed in case of a surprise attack. The kimono was generally made of silk because of its coolness, feel, and appearance. For footwear, either wooden clogs or sandals were used.

The most distinctive part of samurai fashion, the topknot hairstyle, was also the most widespread. Except for Buddhist monks (who shave their heads), people of all social classes wore the topknot hairstyle for hundreds of years. The habit of combining the topknot with a partially shaved head may have developed out of necessity: The shaved forehead made it more comfortable to wear a helmet. 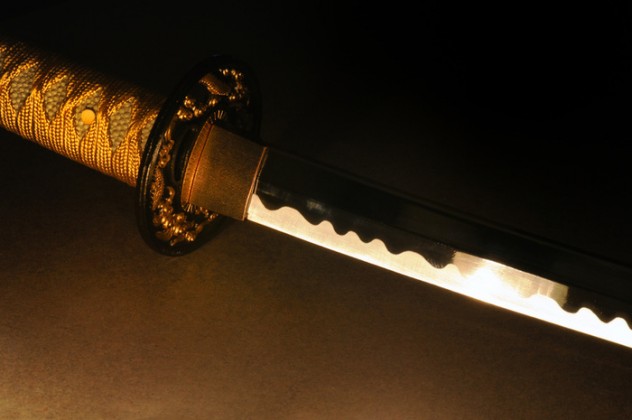 As soldiers, samurai employed a number of different weapons. They originally carried a sword called a “chokuto,” which was essentially a slimmer, smaller version of the straight swords later used by medieval knights.

As sword-making techniques progressed, the samurai switched to curved swords, which eventually evolved into the katana. The katana is perhaps the most famous sword type in the world and certainly the most iconic of all samurai weapons. Bushido (the samurai code) dictated that a samurai’s soul was in his katana, which made it the most important weapon he carried. Katanas were usually carried with a smaller blade in a pair called “daisho,” which was a status symbol used exclusively by the samurai class.

While some samurai did indeed fight with nothing but their katana, most took a more practical approach. Swords were far from the only weapon they had at their disposal. They commonly used the yumi, a longbow they practiced religiously with. Spears became important as personal bravery on the battlefield was eventually replaced by meticulous planning and tactics. When gunpowder was introduced in the 16th century, the samurai abandoned their bows in favor of firearms and cannons. Their long-distance weapon of choice was the tanegashima, a flintlock rifle that became popular among Edo-era samurai and their footmen. Cannons and other gunpowder weapons were also commonly employed. 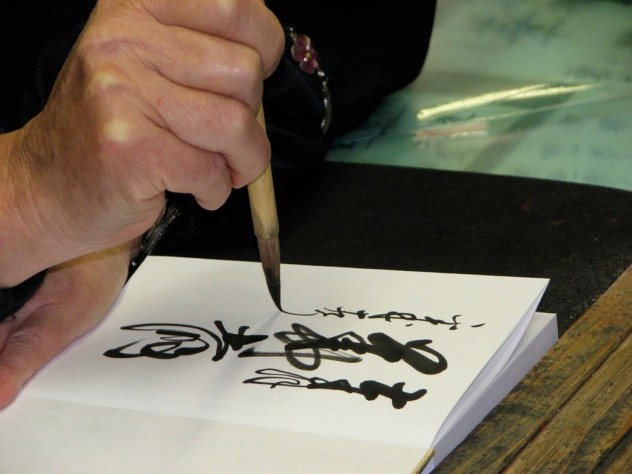 As the essential nobility of their era, members of the samurai class were far more than mere warriors. The majority of samurai were very well-educated. At a time when very few Europeans could read, the level of samurai literacy was extremely high. They were also skilled in mathematics.

Bushido dictated that a samurai strives to better himself in a multitude of ways, including those unrelated to combat. This is why the samurai class participated in a number of cultural and artistic endeavors. Poetry, rock gardens, monochrome ink paintings, and the tea ceremony were common aspects of samurai culture. They also studied subjects such as calligraphy, literature, and flower arranging. 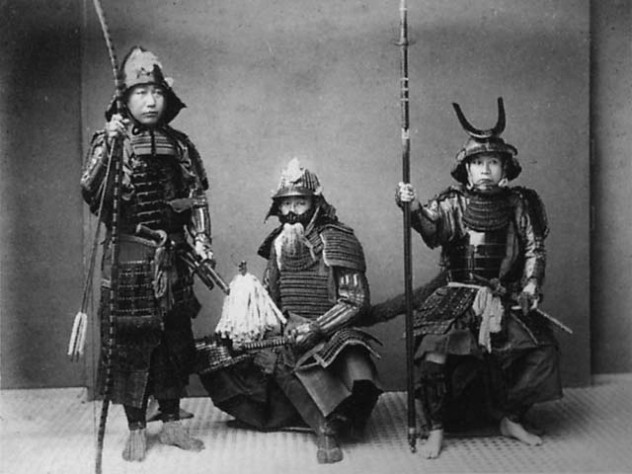 The imposing armor and weaponry makes samurai seem gigantic, and they’re often depicted as quite large and well-built in pop culture. This could not be farther from the truth. In reality, most samurai were quite tiny—a 16th century samurai was usually very slim and ranging from 160 to 165 centimeters (5’3″ to 5’5″) in height. For comparison, European knights of the same period probably ranged from 180 to 196 centimeters (6′ to 6’5″).

What’s more, the noble samurai might not have been as “pure” as the notoriously race-conscious Japanese would like. Compared to the average Japanese person, members of the samurai class were noticeably hairier and their skin was lighter. Their profile—namely, the bridge of their nose—was also distinctly more European. In an ironic twist, this seems to indicate that the samurai actually descend from an ethnic group called the Ainu, who are considered inferior by the Japanese and are often the subject of discrimination. 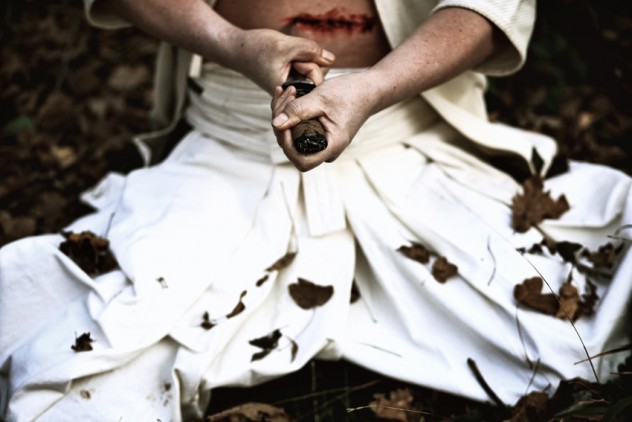 One of the most terrifying things about the way of the samurai is seppuku (also known as “hara-kiri”). It is the gruesome suicide a samurai must perform if he fails to follow bushido or is likely to be captured by enemy. Seppuku can be either a voluntary act or a punishment. Either way, it is generally seen as an extremely honorable way to die.

Most people are familiar with the “battlefield” version of seppuku, which is a quick and messy affair. It is performed by piercing the stomach with a short blade and moving it from left to right, until the performer has sliced himself open and essentially disemboweled himself. At this point, an attendant—usually a friend of the samurai—decapitates the disemboweled samurai with a sword (otherwise, dying would be an extremely long and painful process). However, the full-length seppuku is a far more elaborate process.

A formal seppuku is a long ritual that starts with a ceremonial bathing. Then, the samurai is dressed in white robes and given his favorite meal (much like the last meal of death row prisoners). After he has finished eating, a blade will be placed on his empty plate. He will then write a death poem, a traditional tanka text where he expresses his final words. After the poem is finished, he grabs the blade, wraps a cloth around it (so it won’t cut his hand), and does the deed. Again, the attendant finishes him by cutting his head off. However, he aims to leave a small strip of flesh in the front so that the head will fall forward and remain in the dead samurai’s embrace. This is also so that the head will not accidentally fly at the spectators, which would cause the attendant eternal shame.

Ten Survivalist Foods and How to Find Them