How can we really explain coulrophobia, the fear of clowns? For most people, the creepiness is simply irrational, but in some cases the fear is deeply rooted in some deeply terrifying stories.

In May, 2001 Steven LaChance and his three children decided to move from a small apartment to a larger antique house in Union, Missouri. The house has a basement that also includes an old butcher’s shower area and fruit cellar. With almost all its features in perfect condition, the house was exactly what they wanted—or so they thought.

During the following weeks, Steve and his children were haunted by mysterious entities and unexplained phenomena. For instance, a dark, misty figure of a man was seen lurking in different corners of the house. Steve’s younger son, on the other hand, witnessed something more terrifying: a demonic clown ghost walking in the hallway. As it turned out, his son had a crippling fear of clowns, and the ghost was clever enough to prey on his weakness. They eventually decided to leave the house, but Steve made sure to warn every family that would later move in. His horrifying experience was later featured in Discovery Channel’s A Haunting and in a book written by Steve himself. 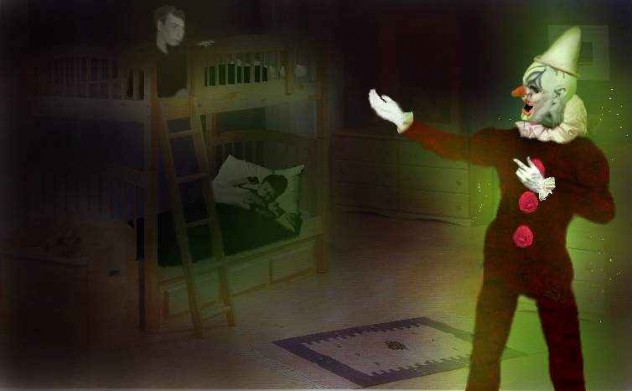 Frederick Zozzaby was a Czechoslovakian clown who moved to Liverpool during the Edwardian era. He tragically committed suicide, but his ghost remained behind to haunt unsuspecting children.

In December 2002, 13-year-old Thomas and his younger brother, Aaron, were awakened in their bunk beds by what seemed like an echoing laughter. They soon opened their eyes to see a hair-raising apparition standing in their door way. Dressed in a one-piece maroon suit, the ghostly clown had one hand on its belly and the other pointing directly toward the terrified children, as if taunting them. His face was even more bizarre: a long crooked nose, hollow eyes like that of a skull, and heavy makeup made the clown completely unrecognizable. Witnesses also tell of a sickly sweet smell that accompanies Zozzaby’s ghost anywhere it goes—a repulsive odor thought to be embalming fluid. 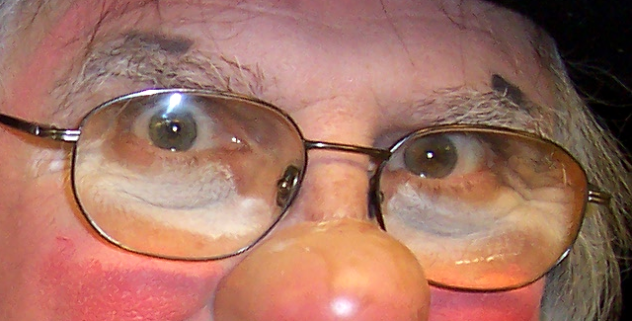 Amon Paul Carlock Jr. was a popular Christian clown from Springfield, Illinois. Using the stage name Klutzo the Clown, he entertained countless Sunday School kids and even orphans from countries like Mexico and Philippines. The fact that the entertainer was a former minister, magician, police officer, and youth counselor made people believe that he was in the business for all the right reasons. But as it turned out, Carlock was just another wolf in a clown’s clothing.

In June 2007, Carlock arrived at the San Francisco International Airport after working as a clown at an orphanage in the Philippines. Because he just came from a country known to be high-risk for sex trafficking, Carlock was stopped by immigration authorities. Nude photos of young boys, some of whom were not aware that they were being photographed, were found on his laptop and digital camera. A search warrant was then issued and at least 21 child pornographic movies were recovered from Carlock’s home. Three boys from House of Joy also came forward, revealing that Carlock had molested them. Klutzo the Clown gave his alibis, of course, but nothing saved him from multiple child porn charges—unless you count death. Carlock died after being tazed by a security officer. 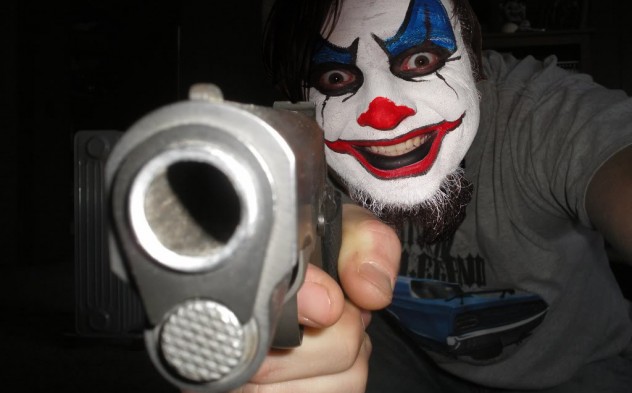 In May 1990, Marlene Warren opened the door of her Wellington residence to receive an unexpected visitor: a clown holding a bouquet of flowers and two silver balloons. But before she could even say “thank you,” Marlene was shot and killed with a .38-caliber revolver.

Initial investigations came up with two possible suspects: Michael Warren, the dead woman’s husband, and the 27-year-old Sheila Keen who was rumored to be romantically involved with the former. Both denied the allegations. Sheila claimed that she and Michael were just business partners. Michael, on the other hand, claimed that he was en route to Calder Race Track with some of his friends on the day of the murder. Despite evidence pointing toward them both being guilty, there wasn’t enough for a conviction, and the identity of the killer clown remains a mystery. 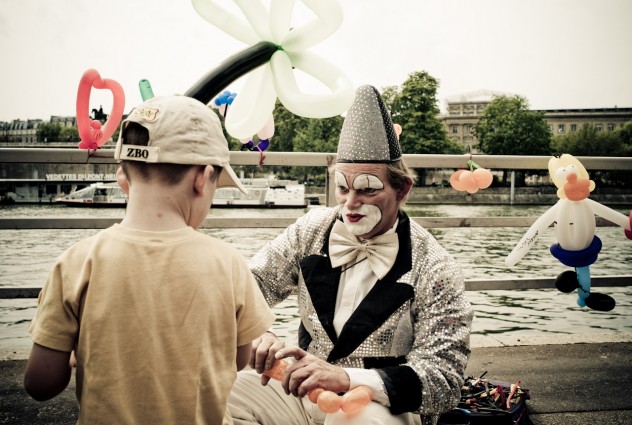 From the ’80s to the early ’90s, child abductors dressed up as clowns terrorized a number of towns in the US. One notable incident happened in May 1981, when police officers from Brookline, Massachusetts released a bulletin regarding a mysterious van lurking near the local elementary school. A clown or group of clowns hiding inside the vehicle allegedly used candies to lure young victims towards the van.

The most recent sighting took place in Chicago, Illinois where a community alert was subsequently issued in late 2008. The similarities were striking: An unidentified man was spotted wearing clown makeup and offering balloons to lure children into his white van. 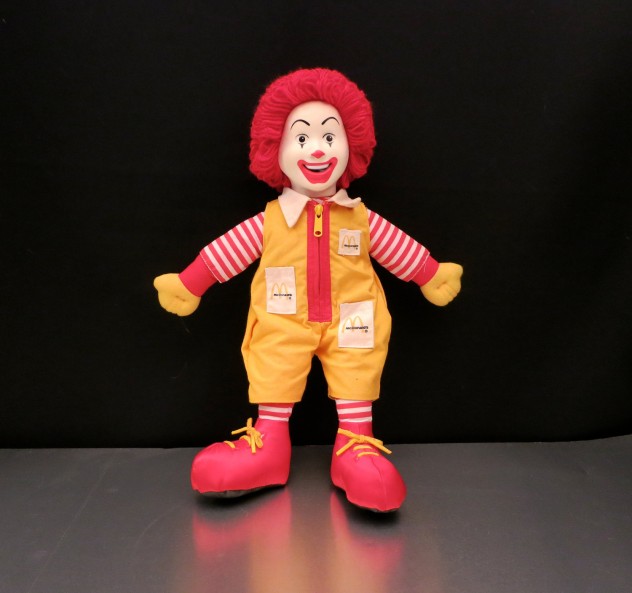 In September 2004, Eric Dau and his wife Sherrise were driving into a mobile home court in Camanche, Iowa. Everything was going smoothly until they saw a startling sight ahead of them: Lined up in the middle of the road were dozens of spooky Ronald McDonald dolls.

The incident happened at approximately 12:30 AM yet a volunteer firefighter in the area claimed that he drove in the same road two hours earlier and saw nothing unusual. Eric’s wife suspected that it was a scheme used by assailants to lure women out of their cars. Strangely, all the clown dolls disappeared without a trace the following morning.

Named after the two legends of the horror genre (Vincent Price and Alfred Hitchcock), this clown doll is a toy and ghost rolled into one. Renee, a real estate agent from Oregon, first saw the doll in an online auction and, as a lover of all things creepy, she purchased the item for $500.

Shortly after putting Vincent in a designated corner in her house, she began experiencing bizarre occurrences. There were several instances when the clown doll suddenly vanished from where it was left, only to reappear in unexpected places. In fact, Renee said that she once found the doll with both arms mysteriously raised in the air. Later, a tape recorder left near the doll captured a deep voice of a man uttering the words “Wake up!” while no one was in the room. Although it is believed that Vincent Hitchcock is possessed by a spirit of a child, the identity of the ghost remains a mystery. 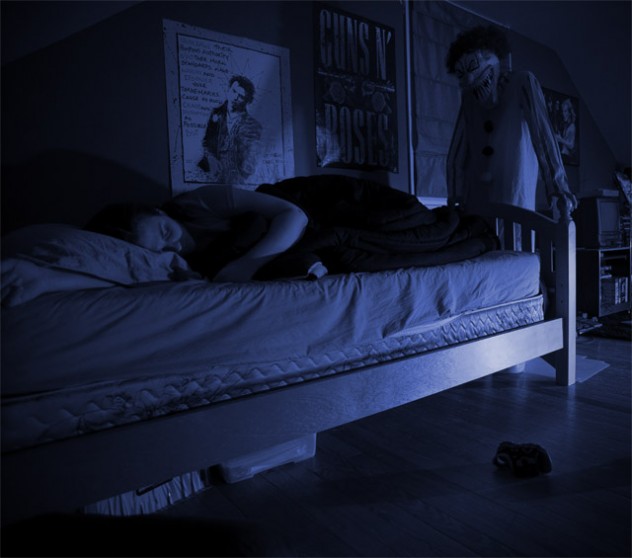 The “Clown Statue” is a creepy story first popularized by chain emails several years ago. Legend has it that a teenage girl was hired as a babysitter by a rich couple somewhere in California. The parents went out for a late dinner date but gave the babysitter freedom to watch TV in another room.

The girl did as she was told, but found the life-sized clown statue displayed in the room too disturbing, so she called the owners and asked if she could cover the statue with a blanket for the evening. Surprised, the couple immediately asked her to call the authorities, because they didn’t have a clown statue.

Different versions of this story have slightly different details, but the moral is always the same: be terrified of clown statues. 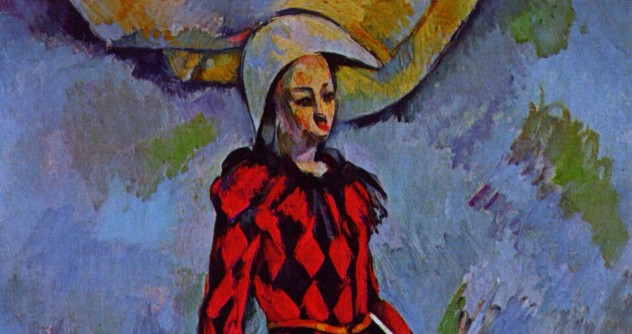 The Harlequin is often described as an androgynous creature with wide-open, dark eyes; long limbs; and an extremely white complexion. In most cases, they only appear to children as young as five or six years old—and according to author Brad Steiger, they are real.

Dan Mitchell, who was only five during his first Harlequin encounter, described the creature as very thin and exuding a “damp, fresh smell like summer rain.” It also gives a sinister laugh chills to anyone who hears it. Karen Davis, on the other hand, says that she woke up one night only to see a Harlequin sitting on the foot of her bed. In both incidents, the Harlequin appeared to be harmless. 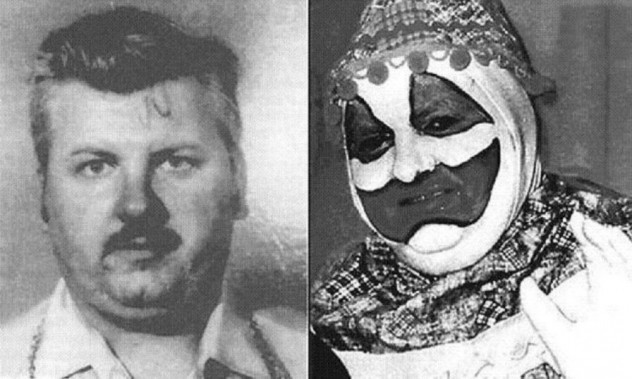 We all know John Wayne Gacy as the guy who gave party clowns a bad name. A prolific serial killer, Gacy was convicted for the murder and sexual assault of 33 young men—all of these while offering his services as “Pogo the Clown” in children’s parties. Sadly, the mystery of the “Killer Clown” didn’t end when he was executed in 1994: Private detective Bill Borsch believes Gacy’s victims didn’t stop at No. 33.

Raffle Tovar, a Des Plaines detective, claimed that he once asked Gacy about the whereabouts of his other victims. “That’s for you guys to find out,” was Gacy’s only sarcastic reply. Another detective also discovered that Gacy traveled to 15-20 states in the 1970s. These data open up the possibility that there might be other bodies buried somewhere else—but to this day, none have been found.

Lui B. is a freelance writer currently based in the Philippines. He has a fetish for local trivia, unsolved mysteries, and all things creepy. You can email him here.