This list is intriguing, yet colorless by necessity. We are familiar with white lab rats, but this unprecedented survey explores the incredible profiles of some rather unusual albino animals, as well as the stranger facets of biological pigmentation. These creatures have ended up with a lack of pigment through genetic mutations that affect melanin production. But albinism helps us catch bizarre glimpses into the animal world, without the obscuring effect of pigment. 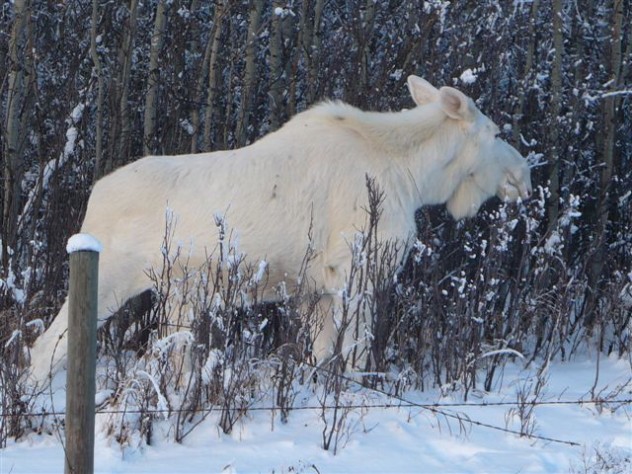 No, it isn’t a ghost of a Christmas past. The moose is the world’s largest deer, and it can be very dangerous to humans. Normally, this ungulate blends in by having a very dark coat that makes it next to invisible among the dark timbers of its forest home. However, this rare albino blends in perfectly with his snow-blanketed forest home in northern Ontario, Canada. However, once the snow melts, this albino is unfortunately much more visible to its predator, the wolf. For a northern mammal, one disadvantage of albinism, with its associated increase in ocular sensitivity, is the sheer intensity of the sun glaring off the snow. 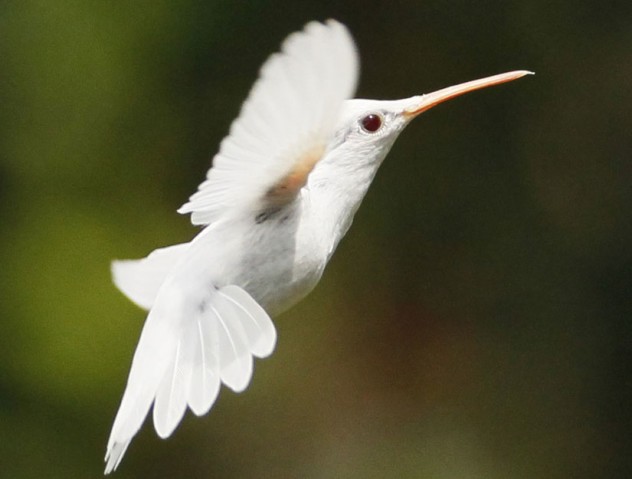 The albino ruby-throated hummingbird, native to eastern North America, garnered significant media attention after it was spotted in a garden in Virginia. Many albinos are either ostracized or hunted down by predators, but this solitary speedster is a loner anyway and probably too fast for most predators to catch. Normally, hummingbirds sport structural colors and a vast array of pigments that make them resemble living emeralds, but this bird’s lack of a ruby throat is offset by its red eyes. The ruby-throated hummingbird can migrate nonstop across the Gulf of Mexico, relying on its extensive energy reserves. 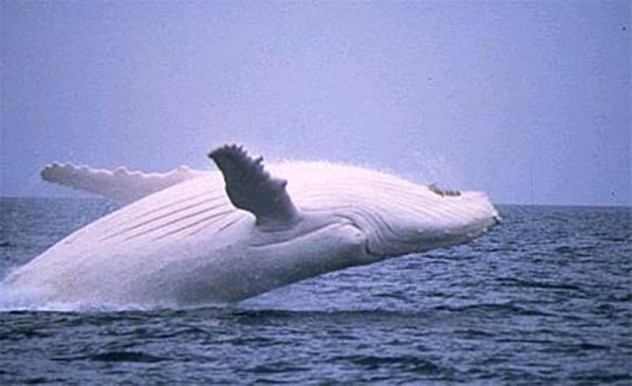 Marine mammal albinos are not entirely unknown in literature, thanks to the legend of Moby Dick—the Great White Whale—and the notorious Captain Ahab. White whales are not entirely creatures of legend, either. A massive, 14-meter (45 ft) albino humpback whale, one of the larger baleen whale species, was first sighted off the coast of Queensland, Australia in 1991. Years later, a humpback whale calf was seen on a popular migration route that sees around 15,000 whales each year. Albino whales may be more sensitive to light at the surface and more susceptible to predation. In an equally odd twist, an albino orca was filmed off the coast of Russia in 2012. As albino orcas are thought to suffer reduced immunity, the discovery of this 16-year-old whale surprised scientists. All the albino orcas found previously were juveniles. 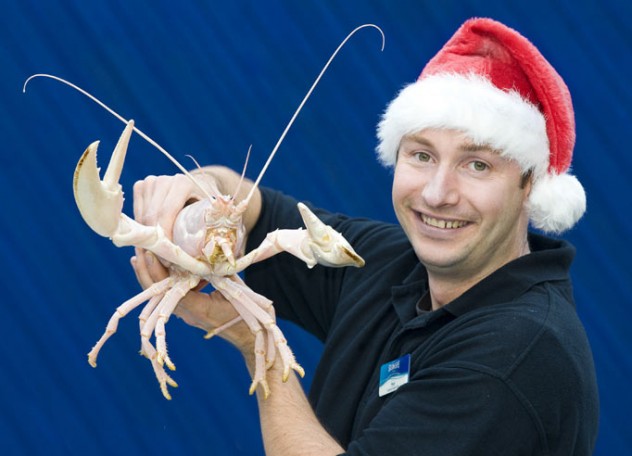 We tend to think of albino creatures as vertebrates, imagining animals such as birds, mammals, fish, or even reptiles. However, no creature is too small or primitive to be missing pigment. Albino arthropods are not lacking in the wild gallery of white. This extremely rare albino lobster looks like it swam through chlorine bleach, but it is completely natural. Its pigment gene is missing, causing its supply of melanin to be absent. The discovery of an albino powelliphanta snail, normally brown in color, was similarly surprising to its finders. This gigantic, somewhat creepy, New Zealand species is a voracious carnivore, biting at other small animals that cannot get out of the way fast enough. 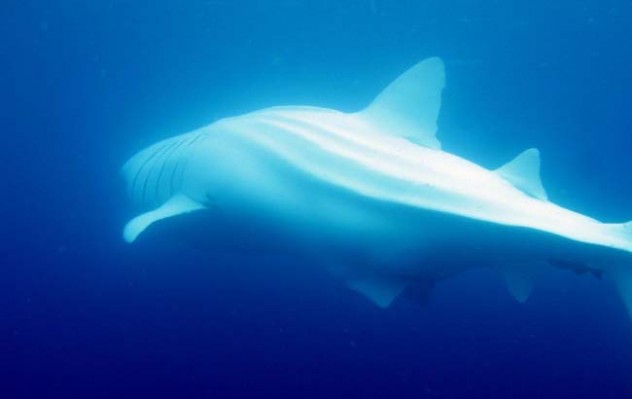 In addition to whales, whale sharks may also have color-robbing mutations. This specimen of Earth’s largest fish is a full albino, and gives another, entirely unique meaning to the term “great white shark.” The ghostly but gentle creature was a rare find in 2008, when it was spotted haunting the ocean waters of Darwin, an island in the Galapagos group. The whale shark feeds primarily on macroplankton, sardines, and anchovies, and it lacks the massive teeth seen in more predatory sharks. While this species poses no direct threat to humans, one cannot deny the spookiness of an albino fish measuring over 10 meters (33 ft) in length. 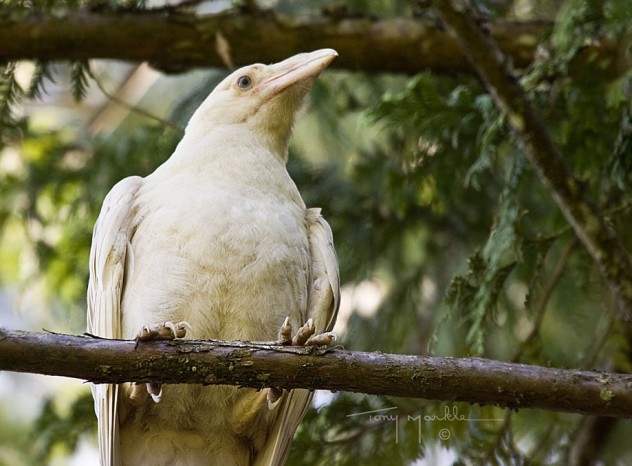 In the human consciousness, vultures and ravens are imposing birds known for their pitch-black plumage and often-dark allegory. First Nations legends speak of a white raven that soiled its plumage on a muddy island as it grieved for its mate. The raven later regained its strength, and it will return in the end times to judge humans under the direction of the Great Spirit. Although they appear in legends, white ravens actually do exist. I have photographed these birds in British Columbia, where they became avian celebrities. Just as real is the ghoulish albino turkey vulture, a carrion-eating native of North and South America. Lacking melanin, its black feathers are replaced with a ghostly white plumage. Unfortunately, its diet of rotten meat can wreak havoc on its immaculate plumage. 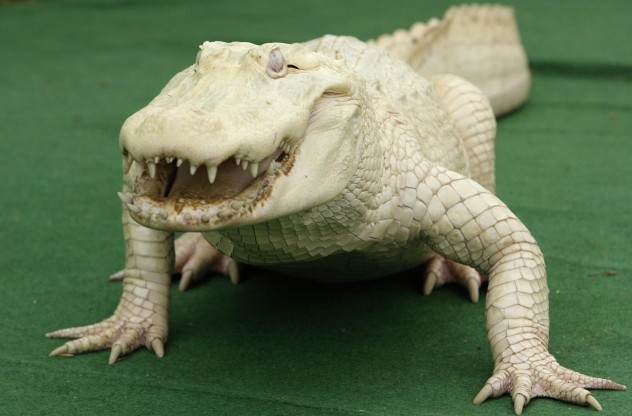 White alligators in New York’s sewers may be an urban legend, but in truth, white alligators do exist. Although alligators are normally green, blending in with their native swamp environments as they stalk their prey, albinism has produced spectacular, science fiction-like creatures that would not normally survive in the wild. The real white alligator looks just like the sewer creature of popular mythology. And this alligator might feel more at home in a darkened sewer than an open wetland. The lack of pigment in the eye alters the amount of light entering the iris, leading to excessive exposure to brightness. As a result, albinos of any species, including humans, may experience great sensitivity to light. 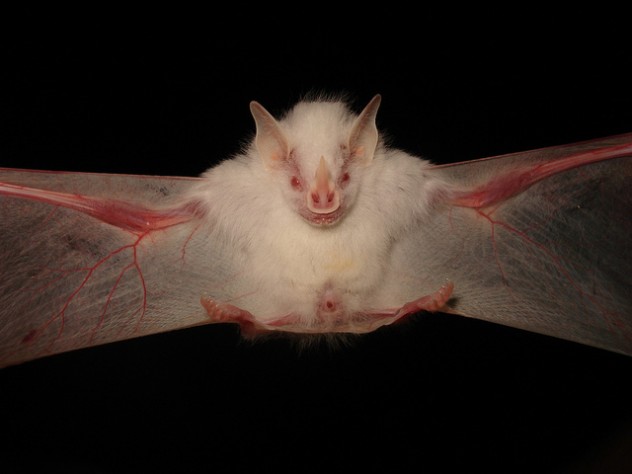 Since ancient times, owls have been hailed as symbols of wisdom. The strange, somewhat human-like night birds have also been regarded as harbingers of doom (or even evil spirits, as believed by the superstitious). When the already-aberrant birds inherit albinism, the effects may cause even the most steadfast to be alarmed. The albino great horned owl, known as the “Flying Tiger,” is a true freak of nature. Equally unusual and eerie are the results of albinism in bats. The sight of one of these bug-hunting flying mammals blanketed in white is one of the most ghostly and rare experiences in the natural world. White owls and bleached bats are fortunate among albinos in one respect: They are not likely to suffer the ill effects of albinism-induced sunlight sensitivity.

Black panthers owe their sinister appearance and notoriety to a sizable overdose of melanin, the dark pigment responsible for coloring humans and many animal species. However, many things in this world have their opposite, and the white panther is a reality of nature. White panthers are much rarer than black panthers. A specimen of an albino leopard is even on display at the Natural History Museum at Tring, in the UK. Several other large cat species may appear as white panthers, including jaguars and even cougars. The animals may be full albinos, or simply leucistic animals. Leucistic animals are missing all types of pigment—not just melanin, but their eyes are usually not affected, unlike albinos. 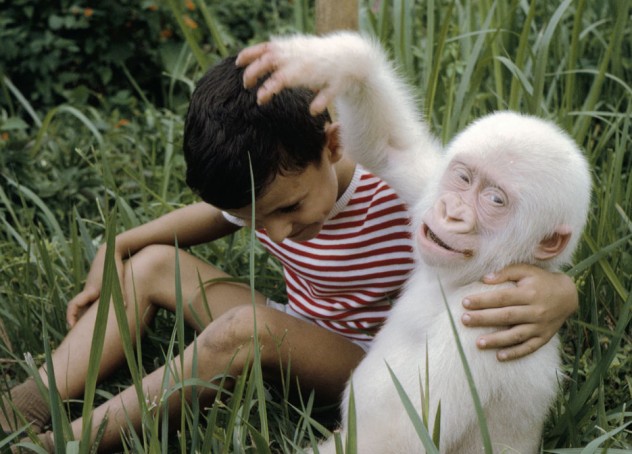 Albinism doesn’t only affect humans from time to time, but also our closest relatives. The other members of the primate order may also be born without pigment. Snowflake, the one and only albino western lowland gorilla documented in the history of biology, was born wild in Equatorial Guinea in 1964. He lived most of his 39 years in Spain’s Barcelona Zoo, where testing revealed that his unique mutation resulted from inbreeding that involved a female gorilla and a male that turned out to be her uncle. Lacking the black, facial feature–obscuring pigment and dark hair typical to gorillas, Snowflake offered a unique glimpse into the para-human appearance of this incredible primate species.

Ron Harlan investigates of the mysteries of nature and the bizarre findings that often appear on this unusual planet. He is a freelance writer and science graduate student based in British Columbia, Canada.