Stem cell research, 3-D printed organs, genetically modified viruses—there’s no doubt we’re living in a world none of our ancestors could have imagined. So it’s easy for us to forget how bad even minor medical problems could be in the days when anesthesia was nonexistent. Could you lie still without moving or screaming while a surgeon cut you open? If you think you’re tough, read an account of Fanny Burney’s 1811 mastectomy. Still have the stomach for horrors? Here are 10 blood-curdling medical instruments from our past. 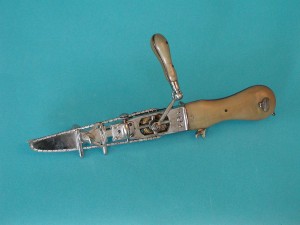 While technically a type of chain saw, this medical instrument, invented by Bernard Heine around 1830, wasn’t used to cut down trees. The osteotome was initially used in trepanning. The sharp spike was driven into the patient’s skull to hold the instrument in place, then the doctor cranked the handle to turn the saw-toothed blade. The osteotome was considered superior to a reciprocating saw or hammer and chisel when it came to getting through human bone without splintering or damaging nearby tissue. Later variations made the tool useful in arm and leg amputations and dental surgeries. 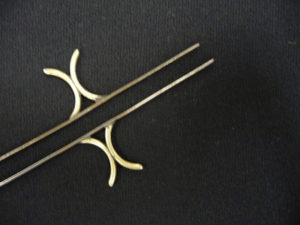 When a male patient’s urethra became too narrow to permit proper urine flow, doctors used a stricture divulsor. Basically, the instrument was inserted into the urethra via the tip of the penis and navigated to the required place. Then a screw in the handle was turned to separate the blades and dilate the urethra as far as possible. The majority of doctors believed tearing a tight stricture was better than stretching it too little, and seeing blood flow afterward was actually considered a good sign. Horrifyingly, it seems some patients preferred to turn the screw themselves, taking up to a half-hour to complete the operation to the doctor’s satisfaction. 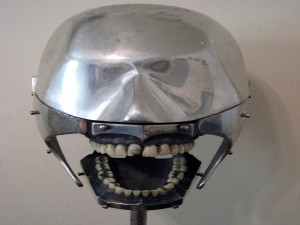 A “phantom” or model was used to let doctors learn and practice techniques. This particularly nightmarish, articulated dental phantom looks like something designed by H.R. Giger for the Alien movie franchise, and likely dates from the 1930s. Judging from the design, this aluminum model was probably covered by a rubber head, now lost. Older versions were simpler, lacking the “silently screaming soul damned to an eternity in Hell” quality of later pieces. Dental phantoms often used human teeth extracted from corpses, and modern dental students still use similar models. 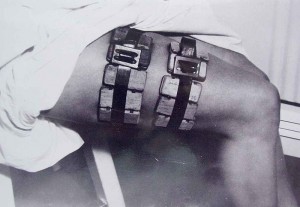 A cheat, perhaps, as this item isn’t a medical instrument, but these devices were used to help create a vaccine that saved many lives. In the history of warfare, far more soldiers died from illnesses than on the battlefield. Typhus epidemics swept through armies—not to mention poverty-stricken areas of cities, where people lived in close quarters without access to proper sanitation. The disease was carried by human lice and had no cure until the 1920s, when Professor Rudolph Weigl discovered a somewhat distasteful method for producing an effective vaccine. Lice were bred, hatched, and fed on human blood, thanks to men and women called “feeders,” who strapped the cages to their thighs or calves. Once grown, the lice were infected with the disease, dissected, and the vaccine created. 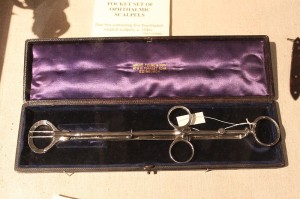 Any infection, no matter how small, had life-threatening potential in a time before antibiotics. To treat tonsillitis and its related complication, peritonsillar abscess, commonly known as quinsy, the tonsil guillotine was developed. The instrument permitted a doctor to reach into a patient’s throat, pierce the tonsil with a fork as if spearing a cocktail wiener at a Super Bowl party, and sever the tissue with the guillotine’s blade. By the late 19th century, a mild anesthetic in the form of a cocaine solution was injected before the guillotine’s use. The instrument was a boon to doctors, who had previously risked being bitten while sticking their fingers into a patient’s mouth. 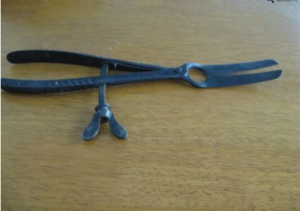 Lacking modern comforts like Preparation H and squeezable soft toilet tissue, patients with bothersome hemorrhoids usually learned to live with them unless a serious problem arose. If it did, ligation or amputation was the preferred treatment. Once he had the patient bent over a table, the doctor reached for the hemorrhoid forceps. This instrument worked by tightly grasping and crushing an external hemorrhoid to restrict the blood supply. The damaged tissue would eventually die and wither off. Internal hemorrhoids were first coaxed out using hooks (enticing, right?) and cauterized or snipped off with scissors.

A bladder stone or vesical calculus was a common problem when many people, particularly those without much money, ate low-protein diets. Doctors typically “cut for the stone” by making an incision in the perineal raphe, exposing the bulb of the urethra. That’s when the lithotome caché came in. The instrument contained two adjustable hidden blades that would spring out and cut and dilate the neck of the bladder (hopefully in a controlled way). The surgeon would then begin probing with forceps for the calculus felt earlier through the wall of the rectum. Because doctors didn’t want to prolong their patient’s suffering in the pre-anesthetic days, such operations took around five minutes or so. 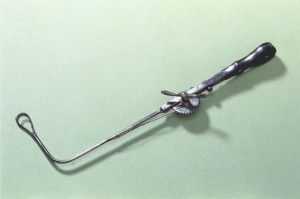 For the removal of hemorrhoids and other growths, tumors, polyps, and cysts in the esophagus, larynx, uterus, or ovaries, an écraseur (French for “crusher”) was the instrument of choice. The loop on the end of the instrument could be a saw-toothed chain or a simple wire and was employed to strangle and crush the growth, preventing hemorrhage by restricting blood supply like a tourniquet. After lassoing the base of the growth, the doctor turned a screw to apply pressure. Variations of the écraseur continued to refine the design. Similar instruments were used in veterinary medicine to castrate cattle. 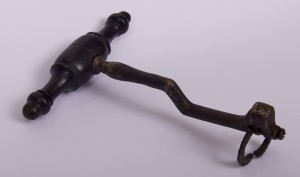 With dental hygiene primitive at best, the causes of cavities and gum diseases unknown, and teeth-damaging impurities in bread and other staple foods, most people were forced to seek a doctor—or sometimes the local barber—to relieve their suffering at some point. Before the tooth key or dental key’s invention in the early 18th century, extracting teeth was done by brute force. If the tooth broke during the operation, the doctor had to chip out bits from the gum using a bone chisel. The dental key allowed the doctor to clamp the patient’s tooth with the claw at the end of the instrument. By rocking or rotating the key, the tooth was levered out of the gum, roots and all—without anesthetic. It’s no wonder people held off treatment as long as possible. 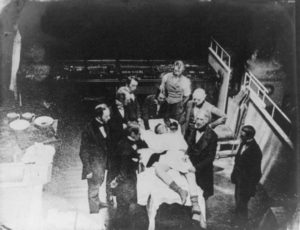 At a time when performing a Cesarean section was certain to kill a woman in labor, and attitudes toward infant mortality were somewhat different than today, doctors facing a life-or-death situation while attending a delivery often chose to sacrifice the unborn child instead. Without getting into too many details, if the doctor determined the fetus was already dead, he would use an instrument to decapitate the corpse in situ, then extract the body by means of a hook or crochet. If the fetus was alive, a perforator delivered a killing blow before extraction. This was considered an act of compassion.