Fossilized feces, or coprolites, are valuable. They sell for big sums at auctions, and researchers use the swirls as a unique source of information. Their content often reveals the surprising things that long-gone humans ate. From whole snakes to other people, our ancestors’ diets apparently knew no hamburgers.

Animal coprolites also carry their weight in the scientific world. Their locations and ages have revealed the eating habits of extinct species, desperate survival tactics, and even a glimpse at the dawn of the dinosaurs. 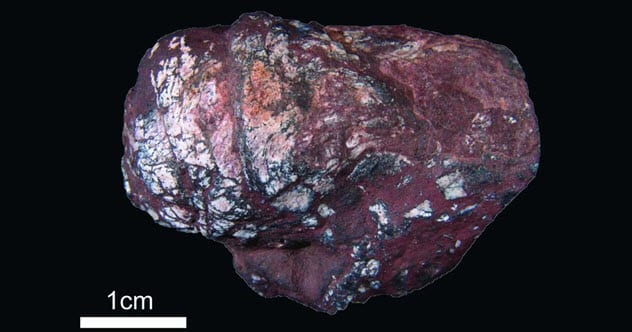 While the rest of humanity just wishes to be tapeworm-free, researchers are obsessed with finding the parasites in ancient poop. The reason? To trace the pests’ origins.

Tapeworm eggs leave the body through the host’s bowel movements, making coprolites the best place to find them. The problem is that tapeworm fossils from the age of the dinosaurs and earlier are exceptionally scarce. This suggested that the parasites did not really get around until much later.

In 2013, that view changed thanks to a thin slice of shark dung. Around 500 coprolites were unearthed in Brazil, and one of them, a spiral-shaped offering from a shark, was around 270 million years old.

In the laboratory, the fossilized swirl was sliced up and one wedge contained 93 eggs. Although the shark species could not be identified, the microscopic eggs were those of a tapeworm. Given their age, they showed that invertebrates have been plagued by the pests for millions of years longer than previously believed.[1] 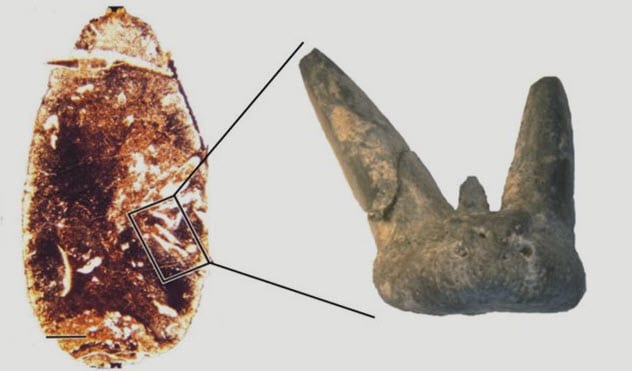 This term describes the act of animals consuming their own offspring. A rare example in the fossil record was found in 2016 when researchers gathered samples from the coast of New Brunswick in Canada.

Among the samples was a coprolite. The spiral shape proved that the owner was a shark, one that lived around 300 million years ago. Inside the swirl was a tooth. An analysis identified it as a baby tooth from the same species of the genus Orthacanthus.

Although past fossils have shown that Orthacanthus ate amphibians and other sharks, this was the first time that filial cannibalism showed up in the genus. This behavior is not as common as people might think. Hoovering up the kids would put any species at risk for extinction. However, it is more likely that the time period was to blame.

During this era, Orthacanthus sharks began to move deeper inland through freshwater channels. While there were plenty of plants, other animals were slow to populate the environment. Facing a food shortage, the sharks probably turned on their own young to survive.[2] 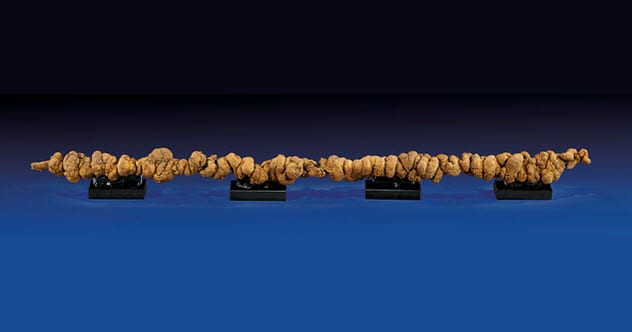 When it comes to exhibitions in a Beverly Hills gallery, visitors might not expect to find poop on display. In 2014, the I.M. Chait Gallery whipped out a whopper. Considered by many to be the longest coprolite in existence, it measured 102 centimeters (40 in) long.

The fossilized poop was dropped by an unknown animal around 33 million years ago. It was found on private land in Toledo, Washington, in 2012 and put up for sale through the gallery’s auction house. According to them, the lump was worth between $8,000 and $10,000.

The valuable item was mounted on black marble and given a glowing auctioneer’s description: “It boasts a wonderfully even, pale brown-yellow coloring and terrifically detailed texture to the heavily botryoidal surface across the whole of its immense length.”[3]

“Botryoidal” was just a better word for a lumpy surface. The high price was not as delusional as might appear. Coprolites are good sellers, and smaller pieces have sold for as much as $6,000. 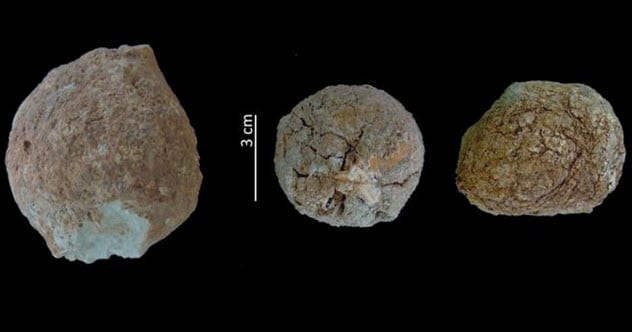 In 2017, archaeologists hit the poop jackpot in Spain. It is rare to find animal latrines or places that are specifically chosen for repeated use. While working at an archaeological site, the team stumbled upon two ancient hyena loos.

The rare pair contained a wealth of bones. Hyenas eat bones, and for archeologists interested in the finer details of an ancient environment, this was the perfect species to drop poop in a pile. The coprolites from both sites, located at Gran Dolina and la Mina, dated back to 800,000 to one million years old.[4]

They showed that the region’s weather was wet during that time. Had it been warm and dry, the stool would have had a fractured and dried-out appearance. The different sizes of the droppings also showed that the latrine was communal. Hyenas of varying sizes and ages used the two locations to keep the rest of their territory clean.

Eventually, the fine bone fragments can also reveal what prey animals existed at the time and the accompanying plant matter might show what environment they preferred. The coprolites contained pine pollen, which suggested that some prey lived in pine forests. 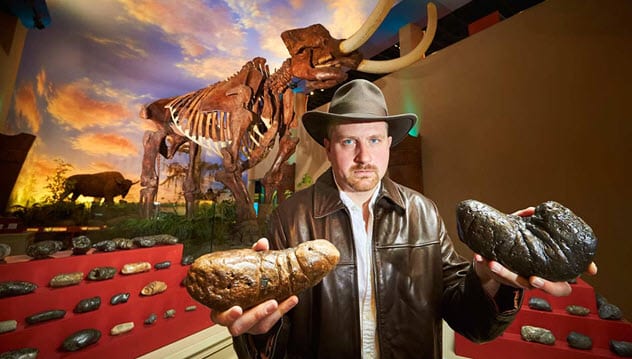 Guinness World Records is no stranger to weird achievements. Even so, when another record was acknowledged in 2016, it must have raised a few eyebrows. George Frandsen, a US citizen, is the proud owner of the world’s biggest collection of petrified poop. The stash consists of 1,277 prehistoric coprolites.

Frandsen’s unusual fascination began in college while studying paleontology. For him and many other scientists, nothing reveals more about an ancient creature’s habits than its dung. It can show the health, feeding choices, and even teeth that were accidentally swallowed.

The collection includes coprolites from eight countries and 15 states within the United States. Each was documented at the South Florida Museum, which helped Frandsen’s bid for a Guinness record.

Among the many specimens, his favorite is a sample he named “Precious” that weighs 1.92 kilograms (4.23 lb). A crocodile-like creature dumped it 20 million years ago. Precious is so valuable because it is the collection’s biggest coprolite that has not been altered. It kept its original form and looked the same as the day it was pooped out.[5] 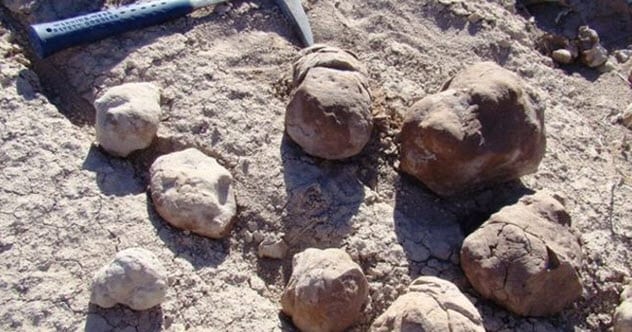 In Argentina is a place called the Chanares Formation. Scientists have their own name for it—the “world’s oldest public toilet.” In 2013, poop-loving researchers found their paradise. The 240-million-year-old site had seven massive heaps of dung.

Numbering in the thousands, the coprolites came in different shapes and sizes. Some resembled sausages or perfect ovals. The biggest was 40 centimeters (15.7 in) wide and weighed several pounds.[6]

Identified from fossils at the site, the animals that created these coprolites were curious creatures. Dinodontosaurus looked like enormous rhinos. However, they were reptiles.

Not only did the collective dumping ground show that some reptiles moved in herds and had communal latrines, but it was also special for another reason. Despite the “saurus” in the name, Dinodontosaurus was not a dinosaur genus.

However, they did live with the ancestors of the dinosaurs. So, with all their clues about the environment and food chains, Dinodontosaurus coprolites can provide a valuable glimpse of the dawn of the dinosaurs. 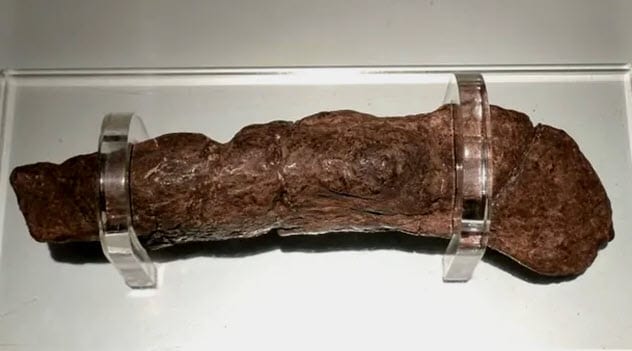 Archaeologists who specialize in ancient excrement are called paleoscatologists. It was a member of this unusual group who found the world’s largest piece of fossilized poop ever produced by a human. The piece measured 17.8 centimeters (7 in) long. It did not turn up in a cave but at the York Archaeological Trust.

A staff member, an enthusiastic scatologist, rooted through the Trust’s archives when he found the eye-watering lump. It became famously known as the “Lloyds Bank turd.” Experts are convinced that it was produced by a Viking and, thanks to the contents of the specimen, could see that the man had a big medical problem.

Common for the time, he was infested with a parasitic worm called Ascaris lumbricoides. These little horrors bore through the flesh, and historical records showed that they spilled from every orifice, even the eyes. For anyone interested in paying the enormous package a visit, it is on display at the Jorvik Viking Centre in York.[7] 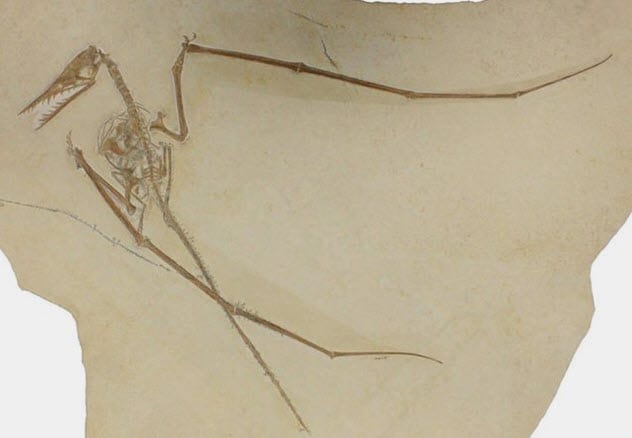 In 1965, paleontologists found an ancient reptile in Germany. The creature was Rhamphorhynchus, a pterosaur that soared through the skies 161 to 146 million years ago.

The fossil was taken to a museum in Canada. At the time, nobody realized the significance of the find. In the fossil club, coprolites count among the rarest members. Finding poop inside a fossilized animal is almost unheard of. Soft tissues like the stomach and intestines decompose quickly and do not petrify well, if at all.

In 2015, researchers pulled the fossil off the shelf for a new study. They found that the specimen was excellently preserved and that soft tissues like wing membranes were visible. The predator’s last meal might have been a fish, if the bones in its stomach area were anything to go by.[8]

Best of all was a suspicious mass near its butt. The lump contained hooklike objects, possibly the remains of an earlier seafood meal. If this is a coprolite, its rarity extends beyond the fact that it was found inside the animal that produced it. It would also be the first pterosaur coprolite in history. 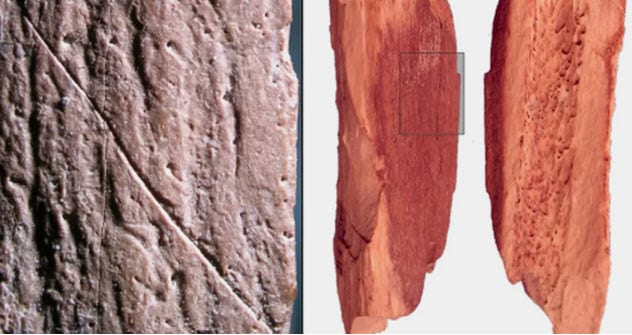 The Santa Maria Caves in Spain hold the remains of animals from the Mesolithic period (10,200 to 8,000 years ago). Recently, researchers were examining the skeletons when things took a grisly turn. There was a human bone with suspicious marks. The elbow had cuts that suggested cannibalism.

A search yielded more human remains—two adults and a baby. However, there were only 30 pieces and only a single bone represented the infant (a shoulder blade with no marks). Mesolithic cannibalism is not unheard of, but the gruesome diet had never been recorded in the western European Mediterranean before.

All the signs suggested that this was the first case. Most tellingly, some of the bones were found inside human coprolites. The damage included human bite marks and stone tool scrapes, most likely to rid the last of the flesh off the bones. Around 19 fragments were scorched. This was a clear indication that Mesolithic hunter-gatherers liked their victims well-cooked.[9] 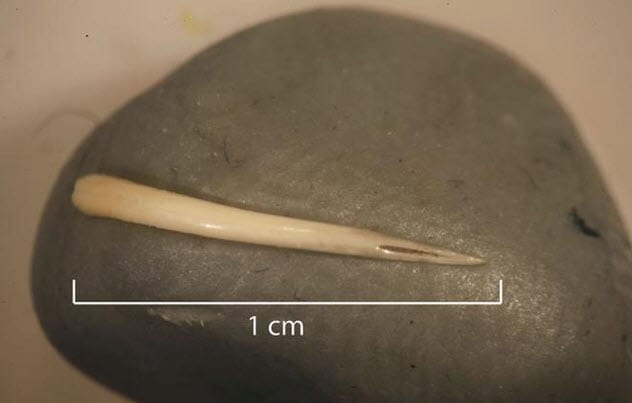 The Conejo Shelter in Texas was an ancient toilet. When archaeologists recently visited the cave, they wanted to find out more about the people who used Conejo. One coprolite showed that a person ate succulents around 1,500 years ago. Then it got weirder. The same person had also eaten a small rodent raw and unskinned.

Apparently, that was normal for the time and region, but what the researchers found next—in the same clump—surprised even them. Apart from finding snake bones and scales, they experienced a cringeworthy moment when the coprolite revealed a long fang.

The sheer number of scales suggested that the snake had been swallowed whole and raw. Consuming a harmless snake makes sense. However, the fang identified the reptile as venomous. It was either a copperhead or Western diamondback rattlesnake.[10]

Why anybody would choose to consume a deadly reptile, fangs and all, remains a tough question. The act could have been ritualistic, driven by starvation, or done as a dare.