When you think about snails, the terms “dynamic,” “awesome,” or “not boring” probably don’t pop into your head. It’s hard to get excited about a slimy bit of mush that moves really really slowly. Why should we care about the trials and exploits of weird French cuisine when there are so many cooler animals out there? Nature is full of creatures with amazing things like bones and faces. And yet the lowly escargot has some pretty nifty tricks up its shell, some of which scientists and engineers are trying to imitate.

The following facts will shatter your expectations of what the gastropod is capable of. Snails got skillz. 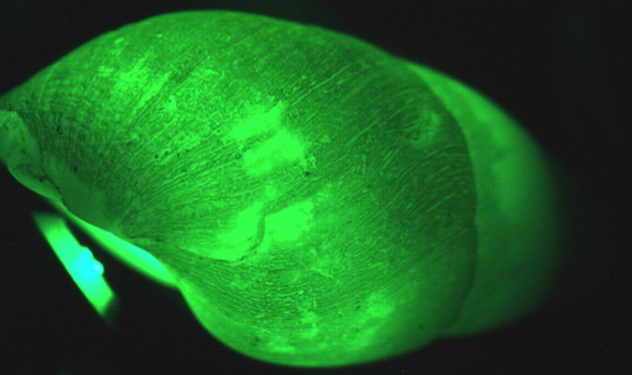 This yellow-brown snail can be found in Australia. When disturbed or knocked around, the clusterwink starts flashing with a blue-green light. It’s kind of like a burglar alarm. No one is exactly sure what the flashing accomplishes though. Is it trying to scare away predators? Or maybe it’s calling to the predators of the predator that’s messing with it. Or it could be communicating to its fellows with some sort of snail Morse code. Science doesn’t really know.

But what they do know is that its shell diffuses light better than any man-made material ever. The clusterwink has a light-emitting organ, and the shell’s scattering effect is so good that every part of the shell lights up. The crystalline structure converts a pinprick of light into a beacon. In the film industry they use diffusers to scatter light to illuminate shadows. Science is now looking for a way to duplicate this effect so that we can have ultra-efficient lampshades. 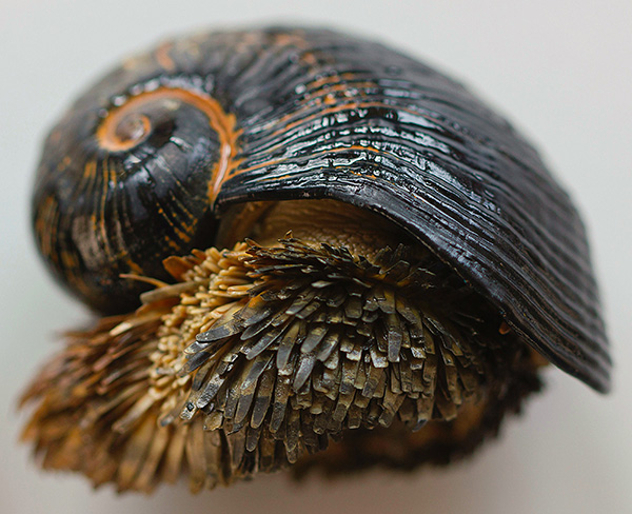 The scaly foot gastropod is probably the worst snail name ever invented. Especially for one of the most incredible organisms on the planet. How many creatures can you name that have an iron shell? None. No creature can grow a metal sheath around itself—except Scaly G. Living nearly 2,400 meters (8,000 ft) below the ocean’s surface, near hydrothermal vents, the scaly foot gastropod incorporates the heavy metals floating in its habitat into its shell.

The result is a sophisticated three-layer design that can withstand incredible forces, the outermost layer of which is made of iron sulphide. The middle layer is a spongy shock-absorber. The SFG’s primary predator is the sinister crab. Scientists believe that not only can this Iron Snail resist the crab’s crushing grip, but that the heavy armor might even blunt the claws, doing real damage to the crab. And of course the military is looking at whether they can make their own snail armor. 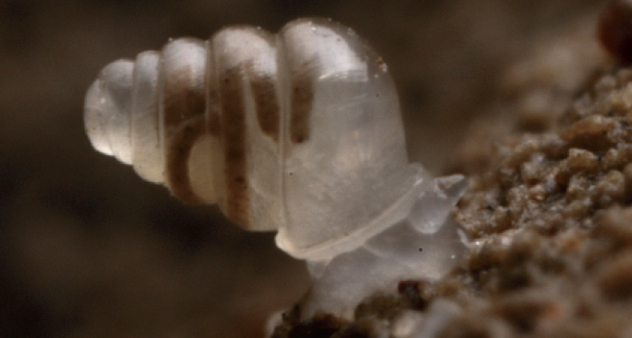 Croatia has one of the longest cave systems in the world and much of it is still unexplored. Recently, researchers found the world’s first transparent snail 900 meters (3,000 ft) underground. It has no eyes and no pigment in its shell or flesh. Since there’s no light, this little guy doesn’t need all those fancy surface-dweller accoutrements.

It’s also incredibly slow, even by snail standards, moving at best a few centimeters a week. It mostly just travels in a circle anyway, grazing on lichens and fungi. However, researchers believe that they may hitch a ride on mammals or take a ride in the caves drainage system. Basically, it uses the local subway to get around. 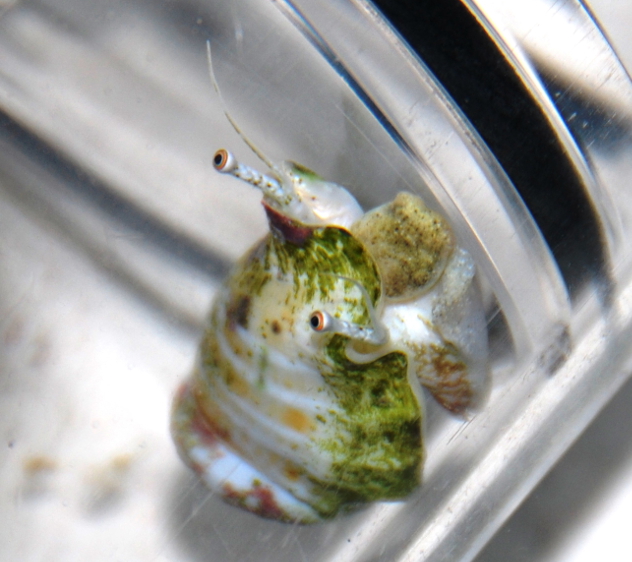 How does a snail escape a predator? The short answer is, they don’t. One of the rules about snails is that they are slow. It’s not like they can just get up and run away. A snails choices are pretty much either to hunker down in their shell and hope for the best, or die. There is no in-between. Unless you’re the hyperactive humpbacked conch snail, living in Australia’s Great Barrier Reef. When trouble comes a-calling, the humpbacked conch jumps away.

They don’t have knees or anything, but when threatened, they extend a mucus-laden pseudo-foot and hop to safety. They’re hunted by the deadly venomous Cone Snail, which we’ve covered before. When they sense the odor of their arch-nemesis, they start hopping like crazy. They can move extremely fast, too. 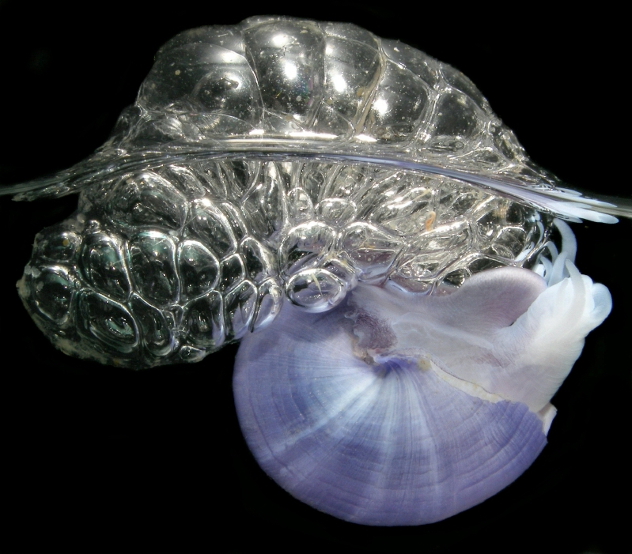 Violet snails are another species that lives in the briny depths. And like all snails, one of its main problems (apart from how good they taste sautéed in butter) is that they’re slow to get around. So how does the violet snail deal with this transportation problem? A frothy raft of bubbles.

Violet snails spit out mucusy bubbles and hang upside-down from them. This way they can ride the waves. They’re kind of like aquatic balloonists, if balloonists could make air filled spheres out of bodily fluids (gross). These bubble rafts aren’t just transportation, they’re also egg-storage devices and platforms for baby snails to ride on. The mucus hardens into the consistency of bubble wrap.

It’s a snail that can make its own flotation devices and packing material. 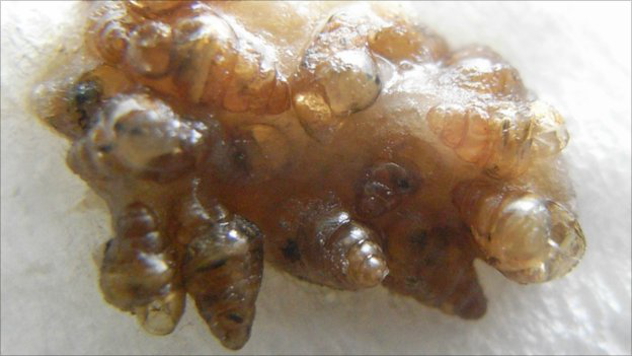 Know what will ruin just about anyone’s day? Getting eaten. But for one little snail it’s actually beneficial. The Japanese land snail often gets pecked up by birds and consumed. Then something amazing happens . . . they get digested and die.

But a good number, roughly 15 percent will actually survive the experience. And while a 40-minute ride through the intestines of a bird probably isn’t the greatest experience, it does give the snail something it needs: transportation. Surviving snails get dispersed over a wide area, so that they can exploit new territory and spread their genes further than their uneaten compatriots.

It’s an airplane ride for snails, where most of the passengers meet a grisly fate but a lucky few get to be excreted in some new exotic land of wonder. And just to prove that the snails that live really are okay, one was seen to give birth right after its flight. 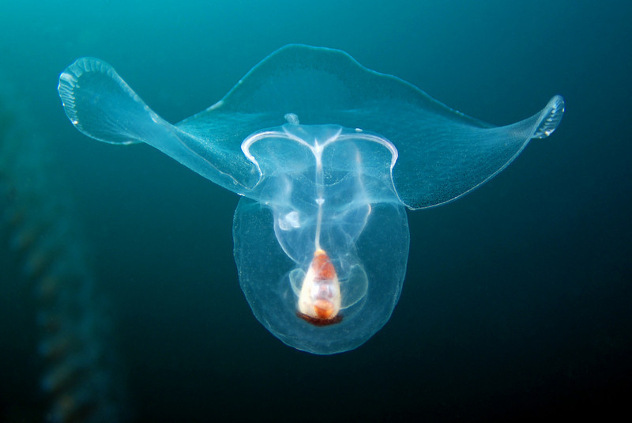 Most snails have one slimy foot that they slither along on. The Antarctic sea butterfly has adapted far better to an aquatic lifestyle by turning that pad into a pair of little wings. It flies through the seas, free as a bird, without a care in the world.

Except perhaps that these plankton-sized guys are every sea critter’s favorite snack. Whales, penguins, seals, seabirds and just about everything else loves to nibble on them. In fact, they make up 90 percent of the diet of the Pacific Salmon. It is the popcorn of the sea.

But these things reproduce fast so it’s okay. However, global warming might kill them all off. Rising levels of CO2 are causing the acidity of the oceans to rise, making their little shells fragment, lose shape, and eventually dissolve. And since they feed so many of the creatures that we happen to eat, a mass sea butterfly die-off could be bad. Snails are a fundamental component of the ocean’s food web. 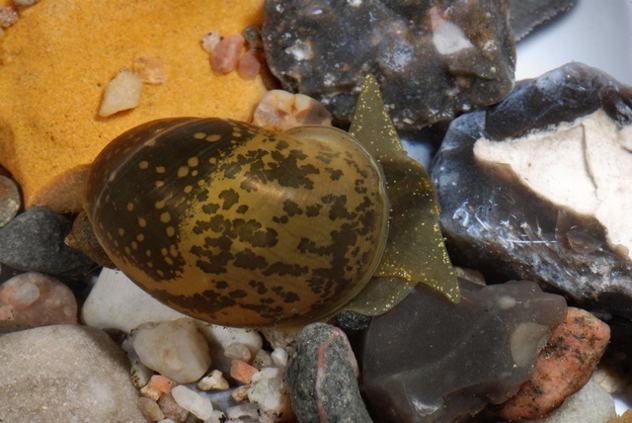 The wandering snail is a common gastropod that lives in ponds all over England. But what is not common is its ability to adapt to its environment. Normally it’s just a plain, solid-colored snail, but research shows that when the wandering snail is living with fish that prey upon it, it changes its skin pigment, becoming spotted, which helps it blend into a pebbled background. It’s harder to see, therefore harder to be nommed on. But that’s not the wandering snails only defense.

It usually has a spiral shell, but when it lives with fish, its shell develops a more rounded, rotund shell, better equipped to deal with the crushing bite of predators. Not only can the wandering snail change its color, but it changes its shape, too. It’s capable of altering its own physical features to adapt to its environment. 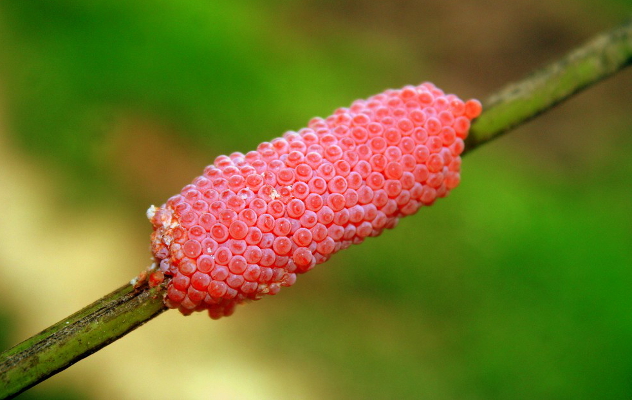 The snail family comes equipped with some of the most deadly toxins in the world. The Cone Snail’s is near the top of every “Most Venomous Creature” list around. But the apple snail is no slough in the poison department either. Considered by the Global Invasive Species database to be one of the 100 world’s worst invaders, they eat aquatic plants such as rice.

Their eggs are coated in two special poisons; one is antinutritive and the other is antidigestive. If you eat their eggs, you won’t be able to absorb any nutritional value from the meal and it’ll continue to mess up all your other meals till the stuff is out of your system. It destroys your ability to eat. Because of this, almost no predators will eat their bright pink eggs, which gives these snails a leg-up on the competition.

Unless there are fire ants around. They’re the only creature we know of that will gobble up those eggs without flinching. The other amazing thing about this poison is that no other animal besides the apple snail makes it. It’s a common poison that plants and bacteria produce, but animals don’t create this stuff. Somehow this snail was able to steal a page out of the plant playbook. 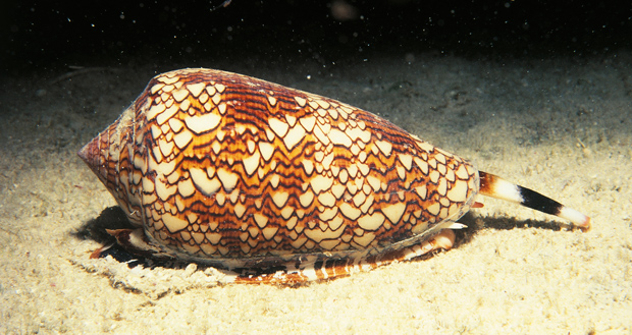 Yes, we’ve already covered the cone snail. Its venom is so toxic, it got the nickname “the cigarette snail”—because that’s all you’ll have time for after it stings you.

But what no one talks about is the sophisticated delivery system. The cone snail fires a tooth harpoon at its victims at 650 kilometers (400 mi) per hour. That’s the speed of a small jet. When a fish comes swimming along, it extends a small, tube-like proboscis. Sensing whiskers at the tip feel for prey. Once they sense something edible, the cone snail launches its venom-filled tooth spear in 250 milliseconds. That’s faster than the blink of an eye, much too fast to see. The tooth is connected to a thin cord, and if it hits, the snail uses it to reel in its catch.

What happens if the cone snail misses? It spits out that tooth and loads another. This critter has its own ammo. How many animals can say that? It’s one of the most poisonous little beasties on the planet and it has a hydraulic harpoon with a clip.

Monte Richard writes for Cracked.com and you can check out his blog.