Staying in a hotel is one of life’s luxuries. Hotels are big business and sell the idea of total relaxation in which a customer becomes a guest and the staff will cater to his every need.

Consider how many visitors pass through an average hotel room. Once you get over the horror stories of germs lurking on the TV remote, other tales need to be told about these hotbeds of tragedy and scandal where legends are made and crimes are committed.

Here are 10 hotels with reputations that far exceed any star rating.

10 Dreaming of The Shining 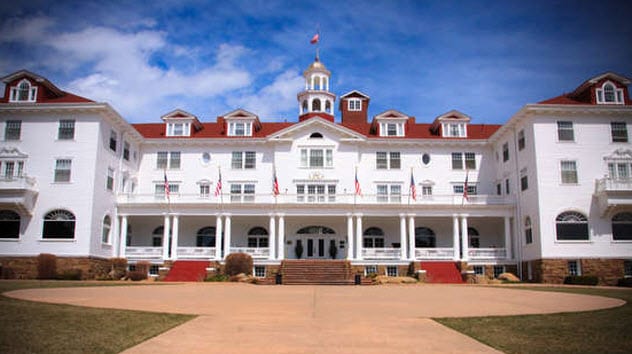 The classic horror film The Shining was released in 1980. It is the story of a family who moves into a remote hotel for the winter and the supernatural events that follow. The film was based on a book by Stephen King and was inspired by an equally unsettling hotel visit.

In 1974, King and his family were on a trip to the Rocky Mountains National Park. Heavy snowfall forced them to stop at The Stanley Hotel in Estes Park, Colorado.[1]

As in the book, they were the only guests in the vast building. King was awakened in the night by a terrifying dream in which his young son Joe, screaming in fear, was chased through the hotel’s endless corridors. Based on this experience, King wrote the novel The Shining that was published in 1977.

Stanley Kubrick made several changes to the original story line when producing the film. King hated the film, describing it as “a Cadillac with no engine.”

Room 217 where son Danny sees visions became Room 237 in the film. Timberline Lodge in Oregon was used for outside shots of the fictional Overlook Hotel. King went on to produce a TV miniseries of The Shining, which was filmed at The Stanley.

Still known as “America’s most haunted hotel,” The Stanley Hotel is a popular destination with ghost hunters and film fans. Mrs. Wilson is a ghostly chambermaid said to lurk in the famous Room 217. Paul, a former handyman, is the ghost who flickers the lights in the concert hall. Kubrick’s film plays on a loop in guests’ rooms as a continuous reminder of the night that Stephen King came to stay. 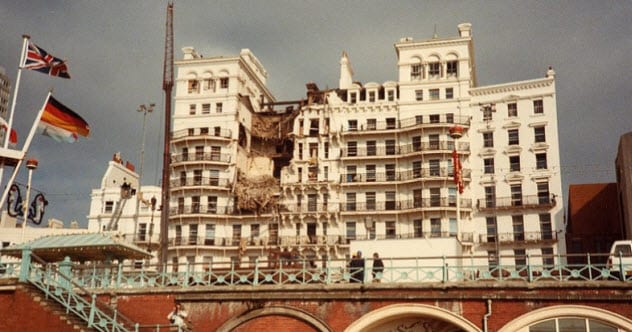 The Grand Brighton Hotel in Brighton (aka the Grand Hotel) was hosting British Prime Minister Margaret Thatcher and the Conservative Party for their annual conference. It was 1984, and the IRA was at the height of its terror campaign to protest against British occupation of Northern Ireland. Plans were made to bomb the hotel with Thatcher as the target.

Patrick Magee and an unknown female checked into the Grand under false names. They requested Room 629, one floor above Thatcher’s suite and central to the hotel. A 9-kilogram (20 lb) gelignite bomb was planted behind the bath panel with a VCR timer. It was set to go off 24 days later.

The explosion ripped through the building at 2:53 AM on October 12, 1984, killing five and seriously injuring at least 30. Thatcher was unhurt and defiantly arrived at the conference to give a rousing speech. The IRA claimed responsibility, stating:

Police identified Magee’s fingerprints from his hotel registration card. He was found guilty and given eight life sentences. Under the terms of the Good Friday Agreement, a peace agreement, he was released in 1999.

Jo Berry is the daughter of Sir Anthony Berry, who died in the bombing. Today, Magee works with Jo’s charity Building Bridges for Peace to help resolve conflict around the world. 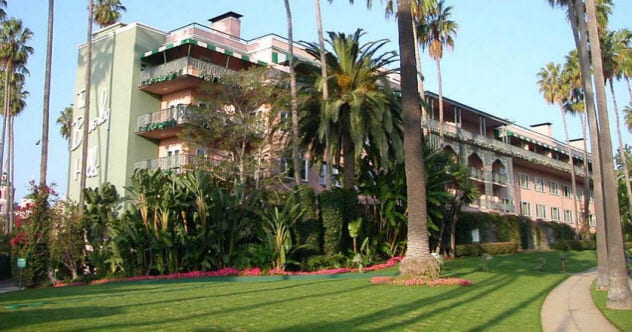 The Beverly Hills Hotel is a Hollywood legend. Painted candy pink and flanked by palm trees on Sunset Boulevard, it was built in 1912. It features the Polo Lounge where Frank Sinatra and the rest of the Rat Pack would hang out and where Marlene Dietrich broke the ladies’ dress code by wearing trousers. Tucked away in the tropical gardens are 23 infamous bungalows.

Elizabeth Taylor and Richard Burton occupied Bungalow 5 with a regular order of two bottles of vodka for breakfast and two for lunch. When eccentric billionaire recluse Howard Hughes stayed in a bungalow, he would order sandwiches to be left for him in a nearby tree.

In 2014, the hotel’s new owner, the Sultan of Brunei, came under fire when his country made homosexuality punishable by stoning. Celebrities including Elton John and Ellen DeGeneres called for a public boycott of the hotel. The mayor asked the city to push for a compulsory sale. The owners ignored protesters and vowed to stay open as guests dwindled and noisy demonstrations were held.

A few years later, the backlash was over as stars were drawn back to the hotel’s old-school glamour. Protesters have moved on, and the Pink Palace keeps rolling out the red carpet.[3] 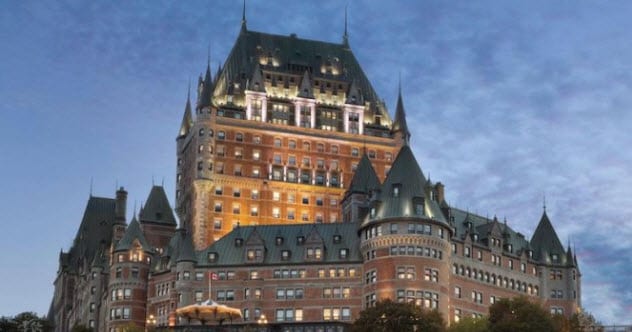 Opened in 1893, the most photographed hotel in the world is Fairmont Le Chateau Frontenac in Quebec City. The hotel’s romantic design is based on French castles in the Loire Valley. During World War II, President Franklin Roosevelt and Winston Churchill met there to plan the Invasion of Normandy. Stalin was invited but failed to attend.

In recent years, the hotel has attracted a new army of fans thanks to an antique mailbox in the lobby. Korean drama Goblin: The Lonely and Great God has 250 million viewers across Asia. The show is filmed in Quebec with the hotel and mailbox forming part of a major story line. Korean visitors flock to the lobby as part of the official Goblin city tour to grab a selfie with this unusual star of the show.[4] 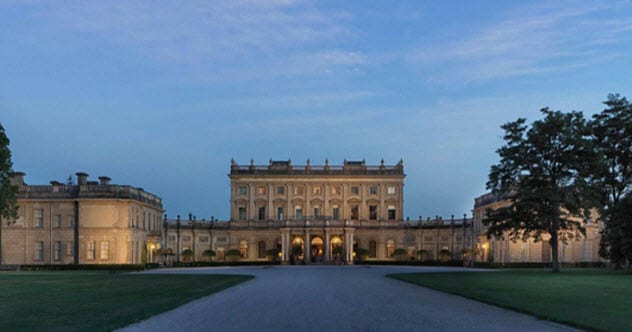 Meghan Markle stayed at the exclusive Cliveden House before her wedding to Prince Harry. But the classic English country house hides a shady past. Early owner William Waldorf Astor—known as America’s richest man in 1890—gifted Cliveden to his son Waldorf and Waldorf’s wife, Nancy. Their house parties were legendary, and the aristocratic, politically influential attendees were known as the “Cliveden Set.”

In July 1961, Secretary of State for War John Profumo was a guest. Stephen Ward, Cliveden’s resident osteopath, was staying nearby with model and showgirl Christine Keeler and Yevgeny Ivanov, a Russian intelligence officer.[5]

The trio joined the party. Keeler and Profumo began an affair, but Keeler was also sleeping with Ivanov. At the height of the Cold War, this was a major security breach.

Profumo denied any wrongdoing. But Keeler sold her story to the press, and Profumo was forced to resign. The government was put under increasing pressure, and Prime Minister Harold Macmillan also resigned. Stephen Ward was arrested for living off immoral earnings and committed suicide. Bill Astor suffered ill health due to stress and died in 1966.

The Astors abandoned Cliveden, and it was gifted to the National Trust. Today, it is a five-star hotel and spa where you can leave your worries behind for around £1,000 a night. 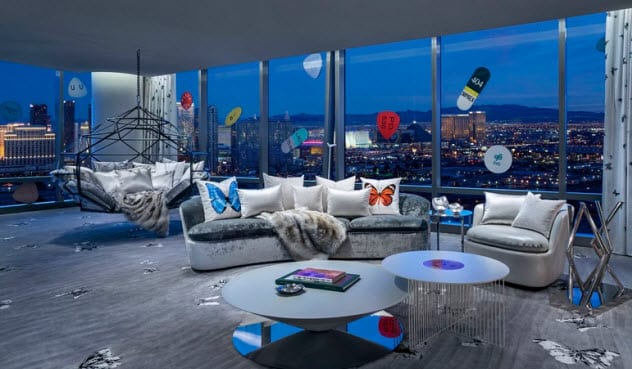 Artist Damien Hirst has designed an exclusive suite at the Palms Casino Resort in Las Vegas. The “Empathy Suite” costs $100,000 per night, making it the most expensive hotel room in the world.[6]

It is a two-story, 836-square-meter (9,000 ft2) residence with a 13-seat curved bar and a media area for 52 people. Included is 24-hour butler service, an outdoor pool overlooking the Strip, and $10,000 in resort credit. Another feature is the two bull sharks preserved in a tank of formaldehyde built into a wall.

High rollers with at least a $1 million line of credit at the Palms get to stay for free. 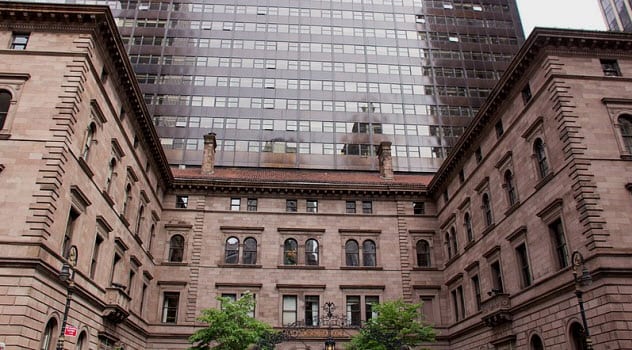 Leona and Harry Helmsley were New York real estate moguls who owned the Empire State Building and the Park Lane Hotel. In 1981, Harry gave Leona the Helmsley Palace Hotel. Leona starred in TV ads for the hotel as the “Queen of her Palace.”

Staff nicknamed her “The Queen of Mean” due to her legendary rudeness and her habit of firing anyone who crossed her.

Builders went to the press after she refused to pay them. They claimed she had charged the cost of repairs at her private home to the hotel, thereby avoiding tax. Leona was tried for federal income tax evasion in 1989. At her trial, employees lined up to give evidence against her. A housekeeper claimed that Leona had said: “Only little people pay taxes.”[7]

Leona was convicted of three counts of tax evasion and other related counts and served 19 months in prison. The Queen of Mean died at age 87 and left $4 billion to charity. 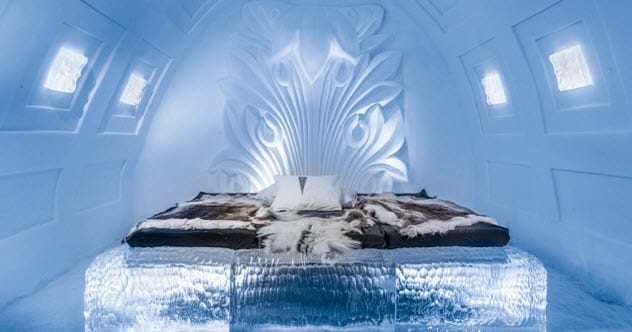 In the Swedish village of Jukkasjarvi, 200 kilometers (124 mi) north of the Arctic Circle, stands the ICEHOTEL. It has 1-meter-thick (3 ft) walls constructed with ice from the Torne River. Every year, it melts away and is rebuilt in a different design. Around 40 artists are selected to carve spectacular ice sculptures.

If you choose a “cold” room, the temperature is -5 degrees Celsius (23 °F). Guests sleep on a bed made of compacted snow and ice, topped with reindeer skin. There is the option of a “warm” room where you can admire the frozen art minus the chill.[8] 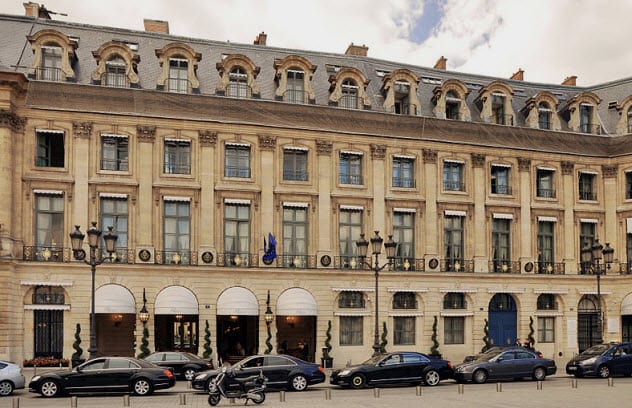 The Ritz Paris overlooks the Place Vendome. Since 1898, it has hosted guests such as Oscar Wilde, Noel Coward, Cole Porter, and Coco Chanel. During World War II, the Nazis occupied Paris and took over the hotel. Staff promptly smuggled out fine wines and hid them in a secret cave on the Left Bank.

After the death of Charles Ritz in 1976, the hotel was sold to Mohamed Al-Fayed, an Egyptian businessman, in 1979. In 1997, Princess Diana began dating his son, Dodi. One night, the couple dined at the Ritz and was pursued by photographers. They made a last-minute decision to leave for Dodi’s apartment. Henri Paul, deputy head of security at the Ritz, personally drove them. Their Mercedes hit the 13th pillar of the Pont de l’Alma tunnel, killing all three.

At the inquest into her death in 2007, coroner Lord Justice Scott Baker released footage from the Ritz’s 43 security cameras. One of the last images of the couple shows them in the hotel’s gold-mirrored elevator with Diana smiling and relaxed.

The hotel was closed for four years in 2012 for a refurbishment costing 200 million euros.[9] 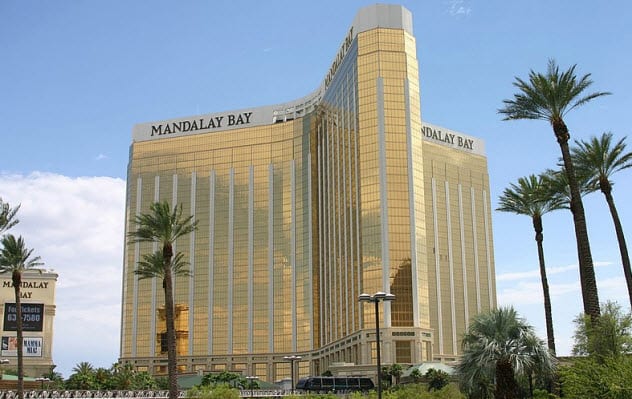 Stephen Paddock, 64, arrived in Las Vegas in late September 2017. He checked into Suite 135 (and later Suite 134 as well) on the 32nd floor of the Mandalay Bay Hotel. On October 1, from the 32nd floor, he carried out the deadliest mass shooting in US history. Fifty-eight people died, and 851 were injured as they gathered for a music festival on the Las Vegas Strip.

At 10:05 PM, shots were heard and automatic gunfire was captured on video footage. Police stormed the room and found 23 weapons. Surveillance cameras had been set up outside his room. Paddock smashed through windows and fired 1,100 rifle rounds into the crowd below. Then he shot himself.[10]

He was described as a millionaire property developer whose father had been on the FBI Ten Most Wanted Fugitives list. Neighbors at his retirement community in Mesquite called him “weird.”

Hotel owner MGM Resorts filed lawsuits against more than 1,000 victims claiming that it could not be held liable for any deaths, injuries, or damages. Victims’ lawyers described it as “verging on unethical.” Litigation has now been suspended, and MGM Resorts is hoping to reach a settlement with the victims.

I’m a true crime enthusiast and lover of words.