Nowhere are faux pas more dangerous than in politics, where one wrong word could potentially lead to conflict between nations. Despite that, many politicians still make their fair share of gaffes when abroad, as seen by the following examples. 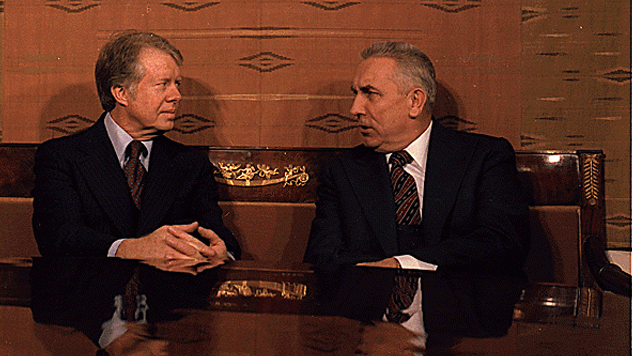 President Jimmy Carter arguably contributed a lot to the use of interpreters in politics—sign language interpreters first appeared on national TV during his acceptance of his party’s nomination, and he was also the president who signed into being the Court Interpreters Act of 1978. That said, he’s had his troubles with translation, too.

In 1977, during a visit to Poland, Carter gave a speech to express his aim to learn the Poles’ “desires for the future.” His interpreter, however, translated that phrase to a baffled Polish audience as “I desire the Poles carnally.”

This first gaffe was bad enough, but the interpreter, Steven Seymour, wasn’t quite done. He also mistranslated Carter’s words about his departure from the US into a phrase that meant that the President had abandoned his country for good. Seymour even turned Carter’s praise for the Polish constitution into words calling it an object of ridicule. Obviously, Carter got a new interpreter for the rest of his visit.

Incidentally, it’s not the only time a US president’s words—whether through mistranslation or by direct quote—have led to a diplomatic contretemps in Poland. In 2012, President Barack Obama sent Polish hackles flying up when he referred to Nazi death camps in the country as “Polish death camps,” seeming to suggest that the Polish and not the (German) Nazis were responsible for them. Since this was during a posthumous award ceremony for a Polish hero of the resistance against the Nazis, one might say he couldn’t have picked a worse time for his slip. 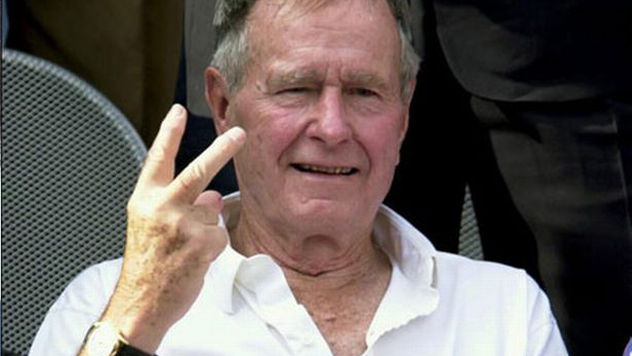 On a visit to Canberra in 1992, George H.W. Bush unwittingly insulted a group of locals by giving them the V-sign while riding past in his armored car. The gesture might mean “Victory” in America, but it means something radically different in Australia when given with the palm facing inward, as in Bush Senior’s case. Used that way, it’s actually equivalent to the upraised middle finger in the US.

Later that same day, Bush Sr. gave a speech at the local center for American Studies advocating stronger efforts “to foster greater understanding” between the American and Australian cultures. The Lakeland Ledger, reporting the president’s gestural gaffe, wrote, “Wearing mittens when abroad would be a beginning.”

Voreqe Bainimarama, the prime minister of Fiji and the man from whom the term “Bainimarama Republic” originates, caused rather an embarrassing moment for his Russian hosts when he visited Moscow for a diplomatic meeting. As may be seen in the official videos of the encounter, Bainimarama’s outstretched hand somehow managed to miss Russian PM Dmitry Medvedev despite the Russian PM putting out his own palm for the greeting. Instead, Bainimarama clearly turned away from Medvedev and shook hands with the latter’s two aides—prompting the snubbed Medvedev to try to hide his embarrassment by acting as though he had extended his arm to brush imaginary dust off it.

Considering that this was the first visit by a Fijian PM to Russia, it was not a very auspicious start for such a precedent. Fortunately, Bainimarama eventually managed to hit the target later on, as may be seen in the photos of the two shaking hands.

Admittedly, he could hardly have helped it if he was feeling ill, but Bush Sr. made one of the best-known faux pas in international politics when he puked on Japanese PM Kiichi Miyazawa during a diplomatic banquet.

Luckily for Japanese-American relations, he wasn’t doing it to act out his stance on a geopolitical issue. Bush Sr. was allegedly ill with intestinal flu at the time. The incident gained him some popularity in Japan for a while, though, as a new word for vomiting entered Japanese slang shortly afterward: bushu-suru, or “to do a Bush.”

First lady’s surprising hug from the Queen of England

The Queen of England is untouchable—in many situations, literally so. Formal protocol for meeting the Queen dictates that you shouldn’t touch her beyond a polite handshake (they call it that, but it’s actually just a brief meeting of the hands when done properly).

So when First Lady Michelle Obama broke the rule by throwing an arm around Her Majesty, the British media was understandably shocked. It was a breach of one of the classic rules of conduct.

Fortunately for Mrs. Obama, the Queen herself seemed to take it in stride. It wasn’t the first time she had to suffer (common) contact, after all. Former Aussie prime ministers John Howard and Paul Keating have both been accused of touching the Queen, and Canadian cyclist Louis Garneau is known to have done the same when he put an arm around her for a personal photo. Still, one would think that the first two—as well as Mrs. Obama herself—as political figures would have been more mindful of royal etiquette than a former cyclist simply hoping for a nice keepsake.

5 Prince Philip And The Aboriginal Spears 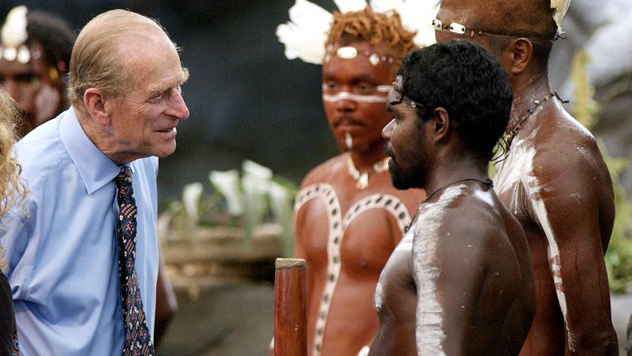 Royals make mistakes too. The famously gaffe-prone Duke of Edinburgh asked some Aborigines during a visit to Australia if they still threw spears at each other.

The recipient of the question, Aboriginal businessman William Brim, said, “No, we don’t do that anymore.”

The jury’s still out on whether or not Prince Philip’s query might have tempted them to change that. 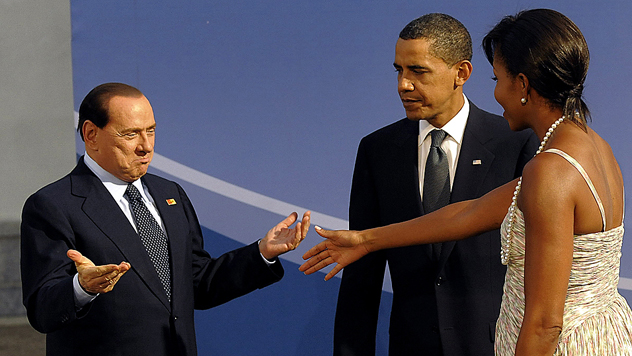 Silvio Berlusconi has always been popular for his mouth, but when he referred to US President Barack Obama as “suntanned,” other mouths still fell open. He made the remark twice, even including the US First Lady in the second statement, which he issued later in Milan: “You wouldn’t believe it, but they [Barack Obama and Michelle Obama] go sunbathing at the beach together—his wife is also suntanned.”

When criticized for the remarks, he responded by calling his critics imbeciles and saying that he had been complimenting the Obamas.

Whether or not Barack and Michelle Obama took it that way is uncertain, since there were no responses from their side. It is a point of interest, though, that during the G20 meeting where he and the Obamas met again, Berlusconi was the only world leader that Mrs. Obama greeted with a handshake instead of a kiss and embrace. 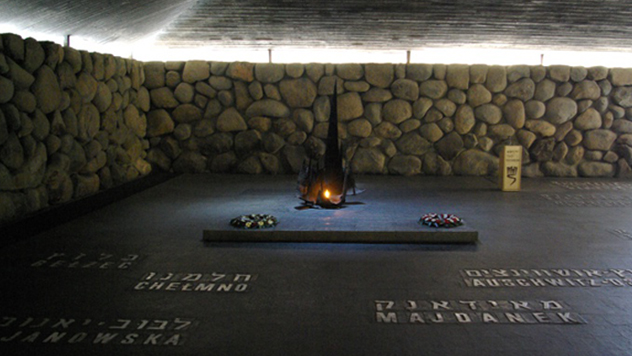 In 2000, the German Chancellor Gerhard Schröder was visiting Israel when he made one of the worst faux pas a German official can do while in the country. As all foreign dignitaries in Israel do, he went to pay his respects at the Yad Vashem Holocaust Memorial, guided by Israeli PM Ehud Barak. An eternal flame there burns for the six million Jews slain by the Nazis. Unfortunately, when Schröder went to turn the flame up, he turned the switch the wrong way, extinguishing the fire.

Barak tried to fix the flame but was unsuccessful. In the end, it took an employee of the Yad Vashem memorial to light it again with a gas lighter. 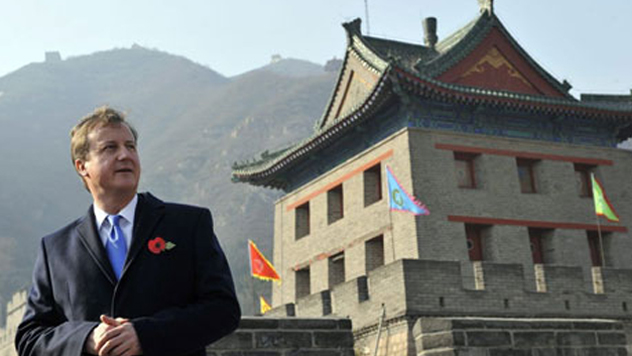 The British PM caused a bit of friction with his hosts on his 2010 visit to China when he and his delegation turned out for an official event with poppies as their boutonnieres. Cameron’s delegation was observing the British custom of donning poppies in November to remember their war dead. Unfortunately, red poppies mean something else to the Chinese, especially when associated with the British.

The Chinese fought the Opium Wars against the British in the 19th century, and they lost both wars as well as Hong Kong in the aftermath. Poppies—the source of opium—are therefore bitter reminders of the shame from those defeats, and the Chinese officials actually requested that Cameron and his fellows remove the poppies before the event. The British officials refused. 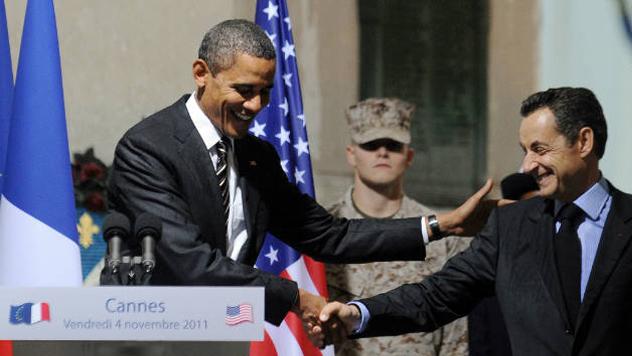 During 2011’s G20 summit at Cannes, French President Nicolas Sarkozy and US President Barack Obama were overheard by the press having a private dialog about Benjamin Netanyahu, the Israeli prime minister. In another accidental hot-mic moment, the two discussed Netanyahu with less than their usual diplomacy.

“I cannot bear Netanyahu, he’s a liar,” said Sarkozy at one point.

“You’re fed up with him?” Obama retorted. “I have to deal with him even more often than you.”

While the exchange wasn’t published by the media during the summit, it did eventually leak out soon after . . . which probably did not help the three leaders’ efforts to hinder Iran’s nuclear plans at the time.

When asked about the conversation, Sarkozy’s and Obama’s offices had no comment. Presumably because they had exhausted them all in their conversation during the summit.

Valerie Chu is a political scientist who has taken time away from the academic circuit (she spent several years teaching at a university) to pursue other avenues of interest, including freelance writing and working as a content consultant for several online publications and companies.