We think we are pretty familiar with Mickey, Goofy, and all the other famous cartoon characters—but are we really? It’s true that many cartoon characters changed over time from their original design, but not many people know that Betty Boop was once a dog or that Tom and Jerry were originally called Jasper and Jinx. Here are 10 surprising facts about classic cartoon characters.

In 1930, when the Fleischer brothers created the Betty Boop character, she was a French poodle, drawn with flabby ears and a black round nose. In her first appearance on screen, at 2:39 in 1930’s “Dizzy Dishes” above, she looks very much like an anthropomorphized dog. She was only slowly was transformed into a fully human character. In the wonderfully trippy “Bimbo’s Initiation” from 1931, when she seduces Bimbo in the final scene, she no longer has a very pronounced dog face but she still sports long flabby ears.

It was only in 1932, in “Any Rags,” that she became completely human and her former poodle ears were transformed into earrings. Incidentally, perhaps to prove her full femininity, this short features Betty Boop revealing her bra—twice.

Everybody knows that Donald Duck once was portrayed as a Nazi in a series of propaganda cartoons during World War II. Less widely known is Donald Duck’s participation in a series of educational films during the ’60s, the last of which was about the dicey subject of family planning. In the 1968 film seen above, called simply “Family Planning” and produced by Disney for the US Population Council, an “average couple” of the world (a Latino man and his Indian wife) is lectured on how to have fewer babies. The idea is to restore the “population balance,” which was compromised because, as the narrator tells us, modern medicine saved too many children from death.

Donald Duck appears between each segment performing clumsy antics, and he even dresses as a doctor to give the couple the “key” to the magic of family planning. As the narrator explains, this magical key can be obtained “merely by taking pills or using simple devices.”

In the end, the video is not as shocking as it seems and it offers a somewhat sensible message, but it is strange to see a beloved children’s character like Donald Duck taking part in such piece. In the end of the short, Donald even points menacingly to the audience while the narrator says, “and all of us have a responsibility towards the family of man—including YOU!”

8 Tom And Jerry Were Originally Called Jasper And Jinx

At 2:24 in his first appearance in the above 1941 cartoon “Puss Gets the Boot,” Tom is called “Jasper” by his owner, Mammy Two Shoes. Although Jerry is unnamed in the short movie, creator Willian Hannah stated that the original name of the mouse was Jinx. The name “Tom and Jerry” was a suggestion by another MGM animator, although some say that the names were inspired by WW II, when the British soldiers were called “Tommies” and the Germans, “Jerries.” While “Tom and Jerry” was certainly an improvement over “Jasper and Jinx”, no one seemed to have thought of changing the name “Mammy Two Shoes” to something more resembling a real name and less a racist horror.

Tom’s name is, in fact, Thomas. In the second episode, “The Midnight Snack,” Tom is only called “Thomas” by Mammy, although in the title card he is identified as Tom. It is not known if Jerry is similarly a diminutive of Gerald or Jerome, as no one calls him by his name.

7 Mickey Was A Jerk

In the first cartoons, Mickey was not exactly a role model for children—or even for adults. In his first film produced, 1928’s “Plane Crazy” (seen video above), he basically date-rapes Minnie, forcing her to kiss him during an airplane ride. At 4:55, she ends up jumping from the plane to avoid further advances from the sex-crazed mouse.

In “The Galloping Gaucho,” the second film produced from the same year, he watches Minnie dance for other men in a bar, while he laughs and drinks beer.

The early Mickey also takes pleasure in abusing other animals. In “Plane Crazy,” he uses a wiener dog as a motor for his first airplane, and forcefully tears out the feathers of a peacock to use as a tail for his second airplane. In “Steamboat Willie,” he tortures a cat, a goat, and a duck, using them as musical instruments.

6 Totoro Inspired The Name Of A Worm With Legs 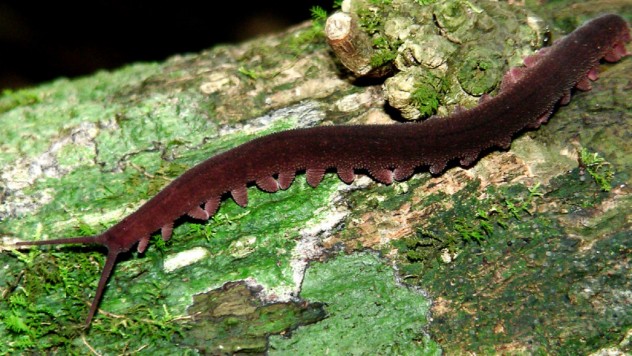 Totoro is a beloved cartoon character created in 1988 by Japanese animator Hazao Miyazaki in My Neighbor Totoro. Totoro is so popular in Asia that when new species of velvet worm was recently discovered in Vietnam, it was named Eopepiparus totoro in homage to the film. Visually, the scientists were inspired not so much by the character Totoro itself, but by the “cat bus” in the same movie, whose multiple pairs of legs resemble the velvet worm’s.

This is not the first time that a cartoon character inspires creative biologists. There were a few other names of species inspired by ‘toons, the most unusual perhaps being a sponge-like mushroom named Spongiforma squarepantsii, obviously after SpongeBob Squarepants. There is also a species of chameleon native to Madagascar forests which was named Calumna tarzan after the King of the Jungle.

5 Smurfette Was A Brunette Created By Gargamel

In the beginning, the Smurfs were all male—or, at the very least, genderless blue creatures. Then the evil sorcerer Gargamel created a female Smurf and sends her to the village to seduce and trick the Smurfs, as seen at 1:55 in the above video. They are not impressed, however, and she ends up repenting and crying—so Papa Smurf makes her blonde. After the transformation, they all fall in love with her and accept her as one of their own. Gentlemen prefer blondes, and apparently Smurfs do, too.

Although Smurfette was the only female Smurf in the village for a long time, facing no competition for male attention, later seasons included other female characters such as Sassette Smurf and Nanny Smurf. While some wonder how the Smurfs reproduced before the advent of females, the fact is that they can actually be magically created from blue clay.

In 1936, Olive Oyl made a cameo appearance in the film Somewhere in Dreamland, which was produced by the same studio that created the Popeye cartoons. Starting at 2:02 in the above video, she appears as a single mother with two children living in poverty during the Great Depression. Although the character is just called “Mother” in the film, she uses the same traditional clothes of Olive Oyl, has the same physical appearance—thin body, no breasts, large feet—and is voiced by the same actress, Mae Questel.

Cameos by cartoon characters in different productions than their own series are not uncommon, either today or during the ’30s. The Fleischer Studios even used Mickey in one of their shorts, portraying him as an evil mouse that locks Betty Boop’s boyfriend inside a manhole and laughs in “Bimbo’s Initiation.” 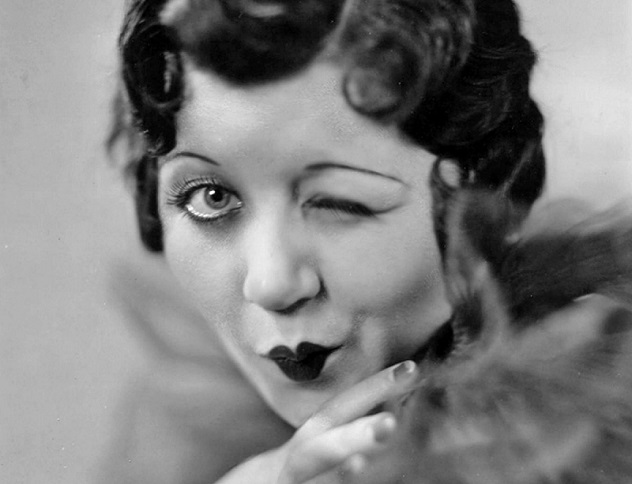 The actress we just mentioned, Mae Questel, was most famous for voicing Betty Boop, all the way from the early Fleischer Studio shorts in the ’30s to her last appearance as Betty in 1988’s Who Framed Roger Rabbit? However, she also voiced Olive Oyl in the Popeye cartoons during the ’30s and Audrey in the “Little Audrey” series. She was also the voice behind Casper the Friendly Ghost in at least one episode and Felix the Cat in the three sound and color episodes produced during the ’30s. Many of her appearances were uncredited.

Besides her work as the voice of famous cartoon characters, she had some memorable roles as on-camera actress. For instance, the woman born an Orthodox Jew with the surname Kwestel played the Jewish mother in Woody Allen’s Oedipus Wrecks and Aunt Bethany in National Lampoon’s Christmas Vacation.

2 Felix The Cat Is A Misogynist

Speaking of Felix the Cat, he was the most popular cartoon character of the ’20s. Despite all that success, however, he was not lucky with women—well, female cats. In the above video, 1925’s “Felix Finds ‘Em Fickle,” Felix’s girlfriend rejects a flower that the hero kindly offers her. “If you love me, get me that one!” she says, pointing to a flower resting on the top of a mountain that reaches 40,000 feet. Felix climbs it, fights bears and vultures, and returns victoriously with the flower, but she is still unhappy. She calls him a “dumb-bell” and says, “I wanted the one next to it!” Felix understandably faints.

In “Comicalamities” three years later, Felix’s love interest has an ugly face, so with a little help from the cartoonist, he re-draws it. To demonstrate her gratitude, she asks for jewels. He gets her a pearl necklace and a fur coat, but she still wants more gifts and won’t put out, so—filled with rage—he just rips her out from the cartoon.

In 1922’s “Felix Turns the Tide,” his girlfriend is excited to see him go to war, and promises to marry him when he comes back. When he returns, however, he finds that she has married his rival, and that they had dozens of kittens together. This time, perhaps getting used to it, Felix is not hurt, and he even laughs: “Gosh, I had a narrow escape!” The timeless transformation from hapless Nice Guy to bitter misogynist was finally complete.

1 Goofy Had A Human Wife

In most of the cartoons of the early ’50s, Goofy was called George Geef, and he had a wife and child. While the face of Goofy’s wife is never shown, we can assume that she is fully human and not an anthropomorphic dog-like creature because she has five fingers instead of four—as Goofy and most of Disney’s animal characters do—as you can see at 4:06 in the video above, 1951’s “The Cold War.” Additionally, all female characters in the Goofy cartoons of the period are shown as regular women without dog features. We can actually see the back of her head in at least one episode—and she has normal human hair, as can be seen in the episode “Father’s Weekend.”

Goofy’s unnamed wife does not seem to have the best reputation in town, either. In 1953’s “Father’s Day Off,” it is suggested that she regularly receives with kisses the milkman, the grocery store man, and the laundry man while Goofy is away. Perhaps because of such shameless behavior, Goofy’s wife disappeared without explanation in later cartoons, and in 1995’s A Goofy Movie, it is implied that she died. It would seem that Goofy is one cartoon dog you don’t want to cross.

Tom Creus is a freelance writer and animator. He has directed several stop motion shorts and wrote the screenplay for the just-released animation feature ‘Til Sbornia Do Us Part. He writes occasionally at tomwaiting.wordpress.com.