Many of us listen to works by the best composers and wonder why we can’t be as brilliant. But would you want their genius if it meant obsessing about numbers or spending time in the company of demons?

The men on this list have created some of the most beautiful and complex music the world has ever known. Yet they were troubled souls, whose eccentricities and obsessions led to some decidedly odd behavior.

10 Erik Satie
Ate Only Food That Was White 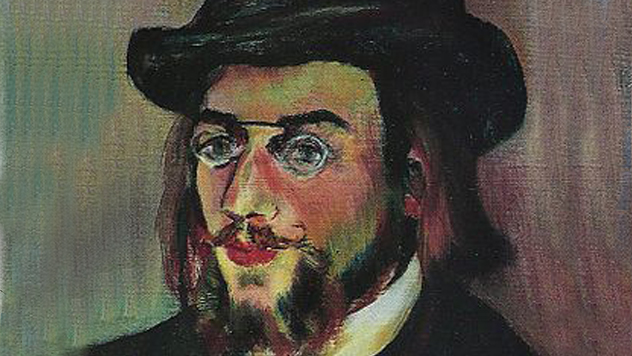 The 19th-century French composer Erik Satie is best known for his piano suite, “Trois Gymnopedies.” But he also wrote works with bizarre, comic titles, such as “Authentic Flabby Preludes (For a Dog)” and “Desiccated Embryos.”

Satie owned 12 identical gray, velvet suits, wearing just one repeatedly until it wore out, at which time he would begin wearing another. At the time of his death he still had six. He detested the Sun, carried a hammer in his pocket for protection, and established his own church—the Metropolitan Church of Art of Jesus the Conductor.

Satie died in 1925 of cirrhosis of the liver. After his death, his followers discovered in his home over 100 umbrellas, 84 handkerchiefs, and numerous letters, most of which he’d written to himself. One of these outlined his diet, which consisted of nothing but foods that were white: eggs, sugar, shredded bones, animal fat, veal, salt, coconuts, rice, pasta, turnips, chicken cooked in white water, white cheese, cotton salad, and certain kinds of fish. 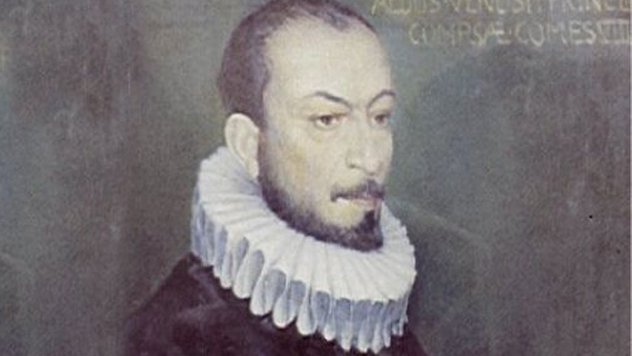 The 17th-century Neopolitan composer Carlo Gesualdo was a royal prince acclaimed for his chromatic vocal music. But his compositions are not the reason he has been the subject of 11 operatic works and a 1995 Wernor Herzog pseudo-documentary called “Death for Five Voices.”

Gesualdo is best known for the violent murder of his first wife, who’d committed adultery with a cross-dressing duke. After his second wife accused his own two lovers of witchcraft, they were tried for murder. One of the women confessed (under torture) that she had made Gesualdo drink her menstrual blood. She further admitted that the other had advised her to take a slice of bread, place it within her womb to saturate it with her “seed,” and give it to Gesualdo to eat with sauce.

Gesualdo ended his days afflicted by an imaginary horde of demons, whose torments only ceased if a dozen young men beat him violently three times a day. While the cause of Gesualdo’s death is uncertain, it is believed he was beaten to death during one of these masochistic frenzies. 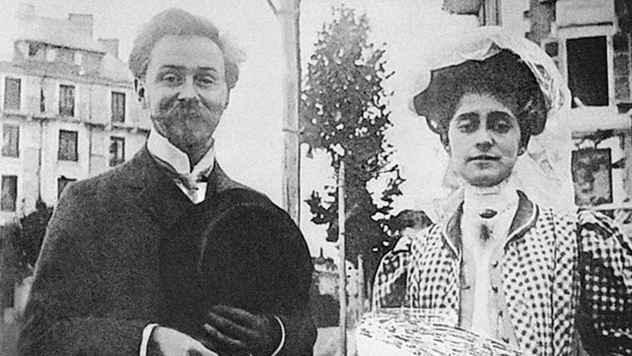 The early 20th-century Russian composer Alexander Scriabin was gifted with synesthesia, a rare neurological condition in which two or more senses intertwine. Scriabin heard music as colors, and invented an instrument that could be played like a piano to project colored light into the concert hall.

Scriabin’s life was a continual search for an experience of God. He engaged in flying experiments and once tried to walk on water. After discovering the theosophical teachings of New Age spiritualist Madame Blavatsky, Scriabin came to believe his music was a bridge to mystical ecstasy.

In later years, Scriabin’s work grew increasingly dark. His Seventh Sonata (the “White Mass”) purported to exorcise demons, while his Ninth (the “Black Mass”) was about summoning them back into living Hell. His final work was to be the “Mysterium,” which would be performed in the foothills of the Himalayas over a period of seven days. Bells suspended from clouds would summon the spectators, and perfumes appropriate to the music would pervade the air. At the end of the piece, the world would dissolve in bliss, and humanity would be replaced by better, “nobler” beings.

Alas, before this final apocalypse could take place, Scriabin died of septicemia from an infected pimple. 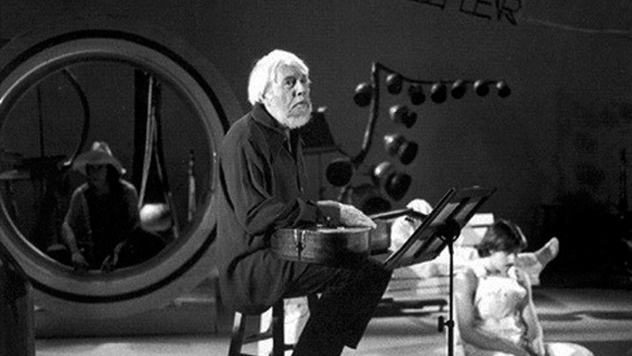 Partch, born in 1901, had a highly unusual childhood. His parents, former missionaries, would occasionally bring home prostitutes and hobos to spend the night. When he was eight, his mother had him circumcised, an event that reportedly left Partch traumatized.

Life changed when Partch discovered a book on alternative tonal structures, which led him to become a self-described “philosophic music man seduced into carpentry.” During the Depression, he wandered as a hobo. He’d collect objects such as artillery shell casings and old fuel tanks, which he fashioned into musical instruments, such as the Chromelodeon, which had 43 tones in a single octave.

Partch intended his works to be “corporeal”—ritual theater in which the orchestra also sang and acted. His work “The Bewitched,” for instance, called for musicians to portray a losing women’s basketball team in the shower room, where they were to perform a wild dance for the nude god Hermes (or his clothed TV equivalent). 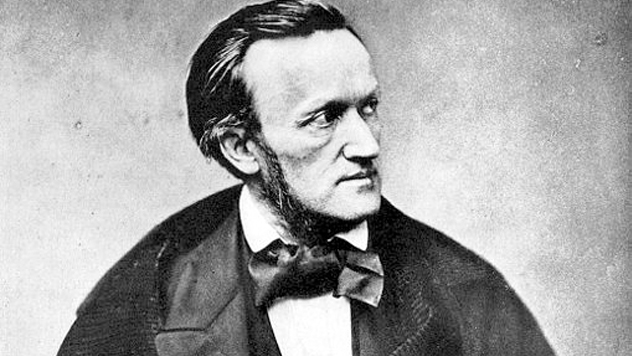 The great 19th-century German opera composer Richard Wagner suffered from erysipelas, or cellulitis, an infection that includes painful rashes and lesions. Wagner tried unsuccessfully to treat the condition with twice-daily enemas, and that may have been the reason for his love of satin robes and cushions.

Wagner’s letters to his milliner, however, suggest that the composer was most likely a cross-dresser. They contain requests for “graceful costumes” trimmed with lacy flourishes and other feminine touches, usually in pink. These were ostensibly for his third wife, Cosima (Franz Liszt’s illegitimate daughter). But Cosima, a meticulous diarist, never mentioned them in her accounts. She even ordered Wagner a pink carpet made from flamingo feathers for his 66th birthday.

To inspire himself for his final opera, Parsifal, Wagner surrounded himself with rose-scented pink cushions and a bath filled with perfume. He died of a heart attack in Venice at age 69, clad, according to rumor, in a pink dressing gown.

5 Anton Bruckner
Numeromania And A Love Of Skulls 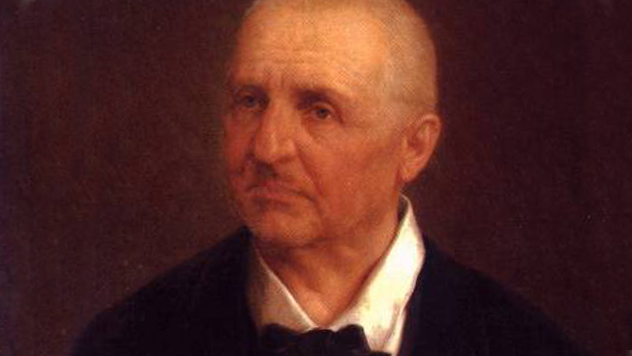 Austrian composer Anton Bruckner suffered from numeromania, an obsession with counting objects. He kept careful lists of how many “Hail Mary”s and “Our Father”s he recited each night, and composed his symphonies so that every bar satisfied his own hidden numerical pattern.

Bruckner was a hopeless romantic, whose infatuation with teenage girls led to an accusation of impropriety at the school where he taught music. He made unsuccessful proposals of marriage to young girls all the way into his seventies, but he never married.

Bruckner also had a thing for dead composers’ skulls. When Franz Schubert’s coffin was opened in 1888, Bruckner was overcome with awe. He reached in and grasped Schubert’s skull with both hands, letting go only when he was physically pulled away. This might not have been so odd, had he not done the same thing a few months earlier to Beethoven’s corpse. 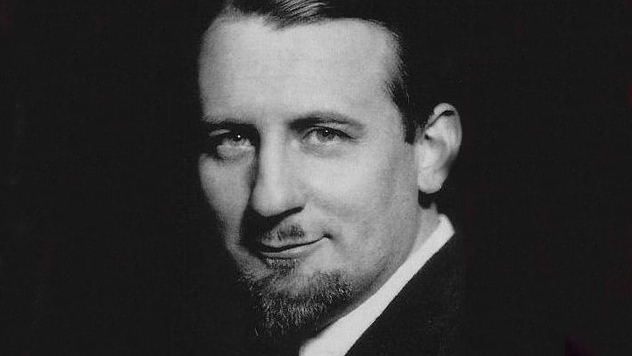 Peter Warlock was the pseudonym of handsome, hard-partying British music critic Philip Heseltine, whose life inspired for numerous films and books, including D.H. Lawrence’s “Women in Love.” When he wasn’t too busy smoking dope or writing crude limericks about other musicians, Warlock found time to write songs—over 200 by the time of his suicide at age 36.

According to Warlock’s illegitimate son, art critic Brian Sewell, Warlock was a “sexually voracious” bisexual sadist with multiple mistresses. When one of his girlfriends became pregnant, Warlock told her to have an abortion, an instruction Sewell’s Roman Catholic mother refused. The two fought about it, and a few days later Warlock turned on the gas and lay down, after first putting his cat outside his house, presumably to save it.

However, Warlock had made a fellow composer, Bernard van Dieren, his heir. Warlock’s legitimate son Nigel Heseltine—the product of Warlock’s short-term marriage to an artist’s model nicknamed “Puma”—claimed that van Dieren had killed his father. But Warlock had suffered from depression, and so the claims were ignored, though even the coroner couldn’t conclusively rule out murder. 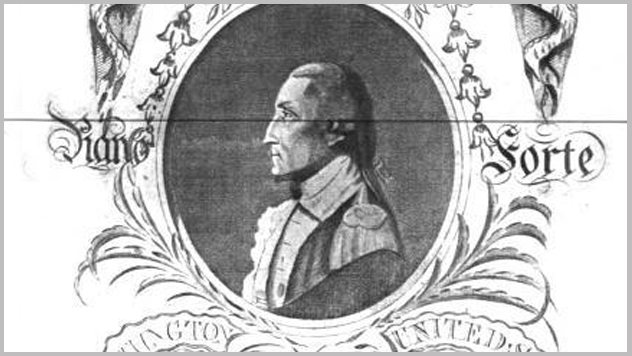 He only composed one notable piece—“The Battle of Prague,” which merited a mention in Mark Twain’s The Adventures of Huckleberry Finn. But the 18th-century Bohemian composer Frantisek Kotzwara achieved notoriety, nonetheless, by having one of the earliest recorded deaths by auto-asphyxiation.

It happened in 1792 at a London brothel, where Kotzwara had engaged the services of a prostitute named Susanna Hill. After dining with Hill and drinking a great deal of brandy, Kotzwara asked Hill to cut off his penis. When she refused, he asked her to hang him from a rope while they had sex in order to “raise his passions.” Not wishing to lose a paying customer, Hill did as Kotzwara requested, but apparently left him hanging too long.

Hill was charged with murder and tried at the Old Bailey. A sympathetic jury found the death accidental and acquitted Hill of the crime. A shrewd Hill cashed in on her ordeal by publishing her memoirs. Along with a copy of the trial transcript, they were reprinted in a 1797 pamphlet, titled “Modern Propensities; or, an Essay on the Art of Strangling.” 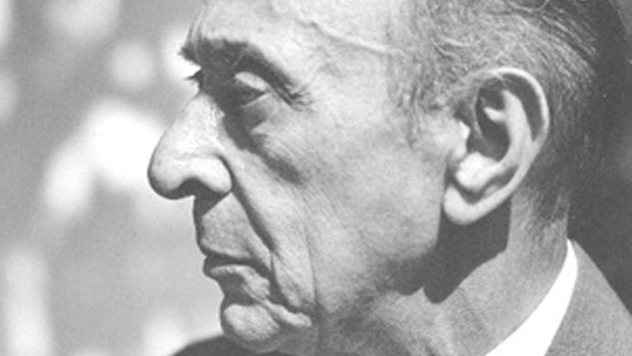 Arnold Schoenberg, the creator of 12-tone (atonal) music, suffered from triskaidekaphobia, the irrational fear of the number 13. Born in Austria on September 13, 1874, he considered the date of his birth an evil portent. When he noticed that the title of his work “Moses and Aaron” contained 13 letters, he crossed out the second “a” in Aaron to make it 12.

In 1951, when Schoenberg was 76, a friend jokingly pointed out that the digits “7” and “6” add up to 13. The thought greatly upset the composer, who became convinced he would not survive his next birthday.

That July 13th—a Friday, as it happened—Schoenberg stayed in bed, anxious and ill enough to call a doctor. At 11:45 P.M., his wife looked at the clock and said to herself, “another quarter of an hour and the worst is over.” A few minutes later, the doctor called her in. Schoenberg’s throat rattled twice, his heart gave a powerful beat, and he died, just as he had feared. 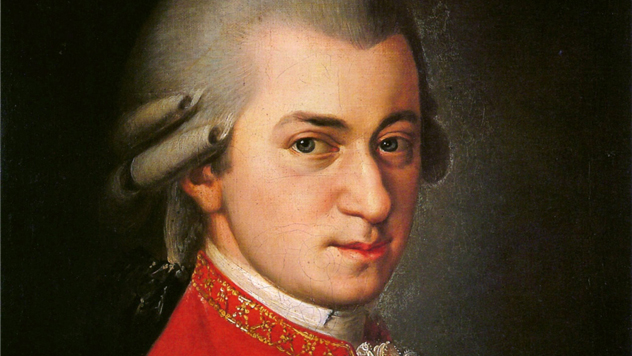 Much has been made of Mozart’s apparent obsession with defecation and farting, formally known as “scatology.” In one of his funnier letters, Mozart writes that a stink has entered the room. When his mother suggests that he’s farted, Mozart puts a finger up his rear and then sniffs it to confirm she’s right.

Less well known, however, is that Mozart liked to imitate a cat. He’d be rehearsing an opera with his singers, when he’d suddenly grow bored and leap over tables and chairs, meowing and turning somersaults. He even wrote a comic song in which a woman responds to her husband’s questions with nothing but meows, until the poor man has no choice but to break down and meow, too. In English, the song is known as “The Cat Duet.”

Some experts have concluded that Mozart suffered from Attention Deficit Hyperactivity Disorder (ADHD). Others think he had Tourette’s Syndrome, a condition sometimes marked by copolalia (the obsessive or uncontrollable use of obscene language).

But whatever the cause of Mozart’s strange behavior, on one thing everyone agrees—Mozart was a genius, whose music still rocks our world.

Jackie Fuchs is a writer and attorney with a B.A. in linguistics from UCLA and a J.D. from Harvard. She played bass (as Jackie Fox) for the 70s all-girl rock band, The Runaways, with Joan Jett and Lita Ford. Jackie is a former journalist and Huffington Post blogger, with an interest in word origins and medieval history. Check out her blog Nothing Too Trivial (Interesting Things for Interested People).

Top 10 Instrumental Songs from the ’60s