Most of us don’t pay any attention to ants, and if we do, it’s probably because they’re either helping themselves to our food or infesting our warm, dry houses. But these wee critters do things that are amazingly human-like, downright disturbing, and just plain weird. Read on to see a side to the humble ant you’ve never seen before. 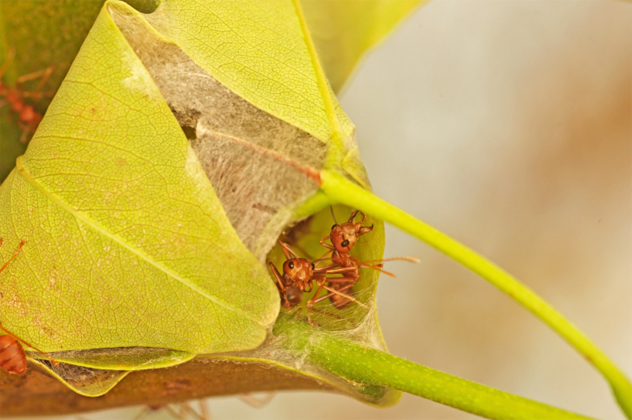 Weaver ants are a widespread group. They’re found across Africa, India, Southeast Asia, and Australia, and they make their homes in the canopies of rainforests. They make their nests by folding together bundles of leaves and sewing them together using silk. This silk comes from the colony’s larvae; the workers grasp the larvae in their jaws and gently squeeze them, kind of like a bottle of glue. This tactic can produce some massive nests—the largest ever found have been more than half a meter (1.5 ft) across, made entirely from bundles of leaves sewn together. These nests can be assembled in less than 24 hours, and new ones are built constantly to replace ones damaged by storms or predation. 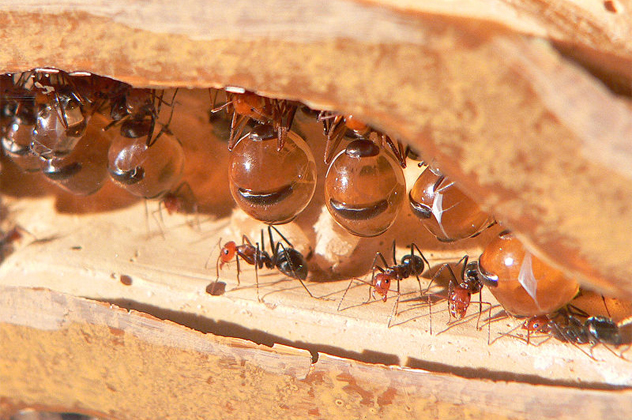 As far as ants go, honeypot ants have it pretty sweet. These individuals don’t have to do any work for the colony; they just lounge about underground, gorging on the tastiest morsels of food tracked down by other workers. As a result, their abdomens swell up to the size of grapes, and are filled with a sugary liquid. The downside to this easy life? During tough times (which aren’t exactly rare in the deserts these ants live in), hungry workers that come to these honeypot ants must be fed regurgitated sugar-liquid. On top of that, raiding colonies often make a beeline for these swollen, immobile sources of sugar, as do many other predators—including desert-dwelling humans. 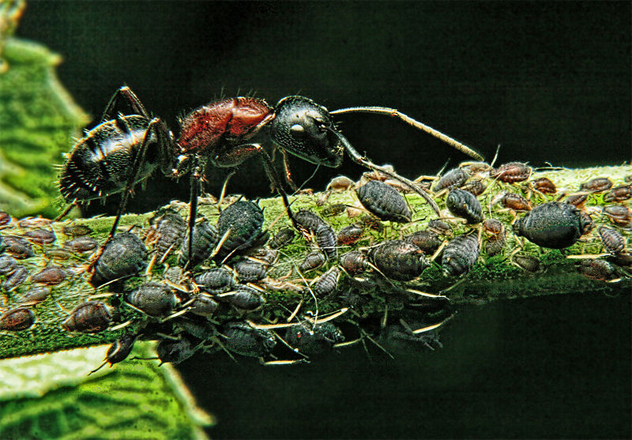 Ants are well-known herders; their mutualistic relationship with aphids is taught in pretty much any biology class. Essentially, ants will seek out aphids and drink the honeydew the aphids secrete from their bodies, providing the ants with a high-energy, easily accessible snack. The ants repay the aphids by protecting them from predators, and will fight to the death to keep them alive.

However, new research suggests that this relationship might be somewhat one-sided; ants will often bite the wings off the aphids to stop them from flying away, and can secrete chemicals from their feet that stunt the regrowth of the aphids’ wings while simultaneously making them more passive. The ants can then easily herd them wherever they need to, including shelters specially built by ants for their “livestock.” This behavior doesn’t only happen between ants and aphids; ants do the same to some caterpillars as well. 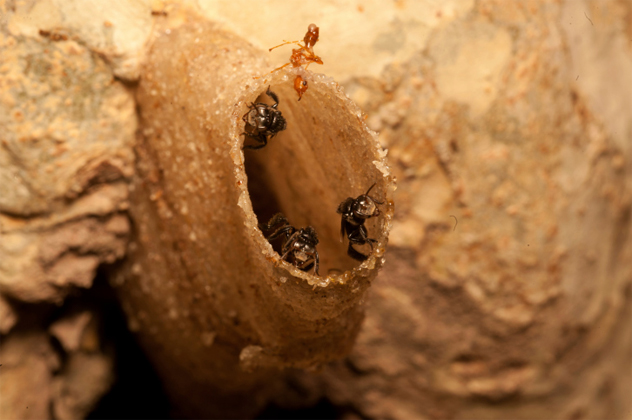 A lot of ant species have no trouble sacrificing their own soldiers for the good of the colony. Since the whole colony functions as a single organism, losing a few individuals is no more detrimental than, say, getting a haircut. An ant species found in Brazil, however, takes this to an extreme—every night, the ants kick sand into the entrances of their nest to seal it off. When the hole is almost sealed, a squad of about eight ants stays outside and continues the job, spending the next hour painstakingly plugging the hole with sand. And it’s a lethal sacrifice—most of the time, the ants outside are dead by morning. But in return, their sacrifice guarantees the safety of the rest of the nest.

A group of floating fire ants

Fire ants live in the South American jungle and make their nests underground, a tried and true strategy for ensuring a secure nest. However, they often live in areas that flood when heavy rains cause rivers to burst out of their banks. So in order to stop their colonies from being wiped out, fire ants will make life rafts. These ants have a hydrophobic (water-repelling) outer casing, so when they clip themselves together they create a waterproof raft on which the rest of the colony can float safely through the flooded jungle. These ants can remain like this for weeks, and can carry hundreds of thousands of “refugees” on their backs. Such rafts have been created by these ants in laboratory experiments in as little as 100 seconds. 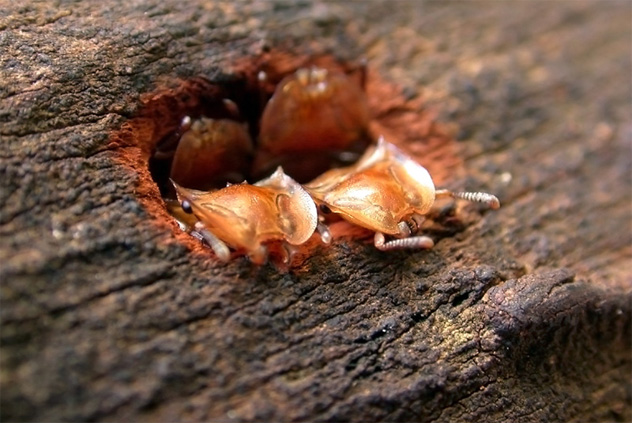 There can’t be many things in life that suck as much as being born for the sole purpose of having your head used as a door. Yet, that is the hand that life deals to some turtle ants, also unflatteringly (but accurately) known as door-head ants. These ants live in the rainforests of the Americas, and usually belong to polymorphic species, meaning that certain castes within the colony exist for certain, specific purposes, and have unique bodies specially designed to fulfill this role. These ants typically make their homes in tunnels dug by beetles in trees, meaning that there will often be several entrances already in place. So in order to stop intruders from coming in, door-head ants will hide inside the tunnels with their flat heads facing outwards, making it virtually impossible for predators to get into the colony. 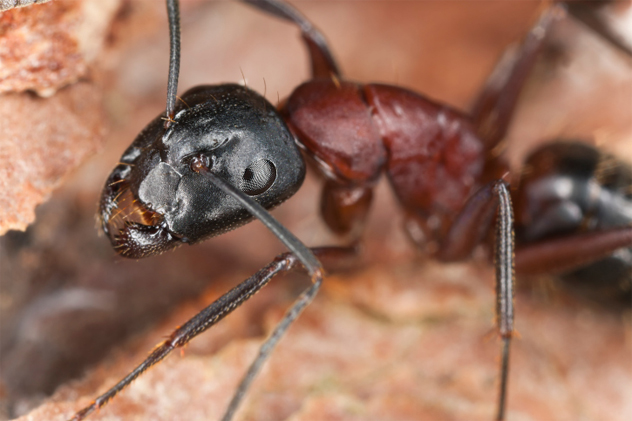 Kamikaze warfare isn’t unique to humans. In fact, several species of carpenter ant have evolved a way to make themselves self-destruct as a living chemical weapon that instantly kills their enemies. These ants have two glands traveling up the length of their bodies. When death comes knocking, they can contract their bodies, rupturing this gland and spraying the toxic chemical onto their foes. A worker ant will grasp the enemy ant in its jaws before deliberately rupturing its body. The result is an explosion of yellow goo that kills the enemy. This tactic has also been observed being used in hunting; one ant will sacrifice itself by self-destructing on the prey, leaving the rest of the workers free to carve up the now-dead prey without any risk to themselves. 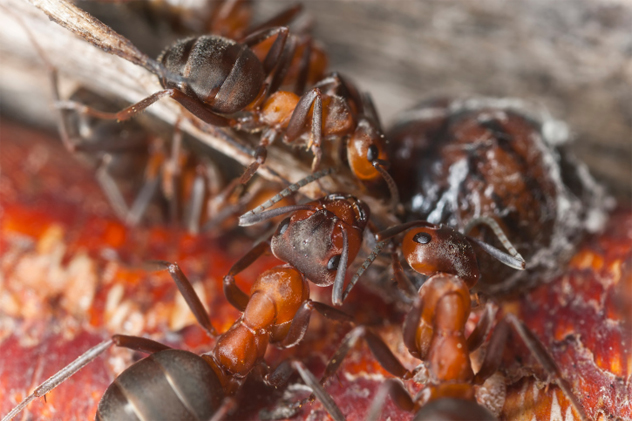 As well as being highly capable herders, some species of ants are highly capable farmers. Several different ant species cultivate fungi to feed their colonies. One of the coolest examples of this is the Cyphomyrmex genus. Rather than growing normal “mushroom” fungi, they cultivate yeast—the same type of stuff used to make bread. But Cyphomyrmex ants don’t bake it into biscuits; they eat it raw and alive. To grow the yeast, they lay down an open graveyard of dismembered insect parts and spread the spores on top. The yeast grows in thin, spotted sheets, which the ants harvest a bit at a time to feed their larvae.

And the graveyards are surprisingly colorful—for some unknown reason, the ants choose mostly brightly colored beetle carcases, leading to a kaleidoscope of reds, blues, and greens, all maintained by an army of dedicated ant farmers. 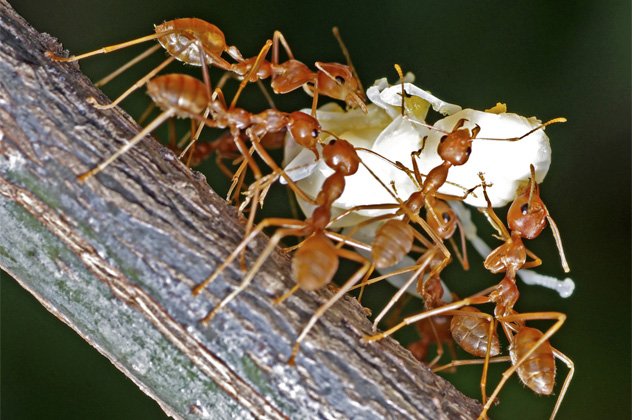 Vampire ants, also known as Dracula ants, were only discovered fairly recently in Madagascar, and are some of the most horrifying things nature has produced. They live in small colonies by ant standards (around 10,000 individuals), often hidden in rotting wood. They get their name from their gruesome feeding practice—workers and queens will bite holes in their colony’s own larvae, and feast on their hemolymph (the insect version of blood). This harvesting is done in a very controlled way; enough is taken to ensure the ants get their meal but the larvae are not killed. Entomologist Brian Fischer, who discovered these ants, has spoken of seeing all the larvae in a colony covered with clearly visible scars where they had been cut open and drained. 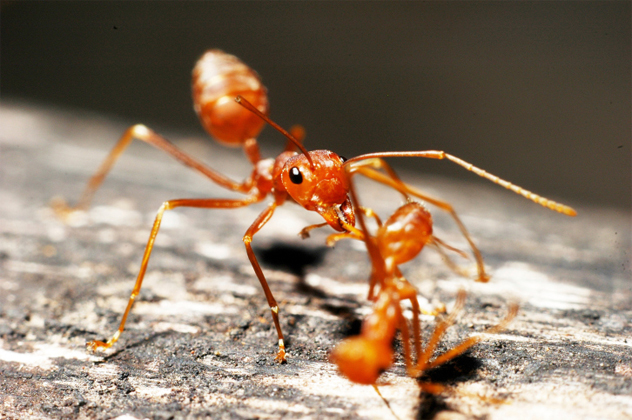 Most readers will likely be surprised to discover that slavery is not unique to humankind. There are more than a few species of ant that do this, with some even having workers bred specifically to go out and capture slaves from other colonies. The general M.O. of slave-maker ants is to raid a nearby enemy colony and kidnap eggs and larvae, then raise these as their slaves. These slaves do everything, from gathering food to cleaning the queen to defending the colony; they even carry their masters to a new nest site when the colony moves. Interestingly, raiders from slave-maker colonies will often target the strongest enemy colonies for invasion, likely associating strong defense with strong, healthy slaves.

Richard is a university student fascinated by the natural world and all things political.