Whales are some of Earth’s most mysterious animals. They’ve popped up in stories from the Book of Job in the Bible to Star Trek IV: The Journey Home, so you’d think by now we’d have learned everything about our ocean-dwelling cousins. Yet there are 78 species of whale on the planet, and we’re still learning weird stuff about them all the time.[1] For example…

From one point of view, we can never know if the beluga whale really loves music. However, they do respond and express great curiosity and even sometimes join in a synchronized dance.

In 2013, a pair of artists rigged a boat with an underwater sound system and sailed out to sea to play the belugas an underwater symphony. The whales were extremely interested and even joined in, showing an appreciation for music and art above and beyond most known creatures on Earth.[2]

Any doubt that beluga whales enjoy music could probably be dispelled by the above video of a mariachi band playing to a captive beluga whale who, scientific objectivity aside, seems to be loving it.

9 Bowhead Whales Can Live for More Than 200 Years 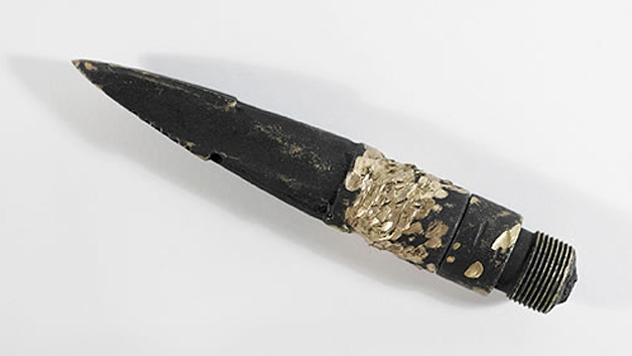 In 2007, a dead bowhead whale being studied by scientists was found to have something very strange embedded within it. Upon closer inspection, it appeared to be a weapon fragment that dated back to a patent filed in 1879. This suggests the bowhead survived a whaling attack from more than 100 years earlier.

Scientists actually can’t agree on the bowhead whale’s maximum lifespan. Most die between the ages of 60 and 90. However, amino acids in the eyes of bowhead whales suggest that the oldest ever discovered may have been up to 211.[3] Some scientists have speculated that the whales could live even longer than that. The only thing we know for certain is that it’s unlikely that a human could survive that long, even without an ancient harpoon embedded in its back. 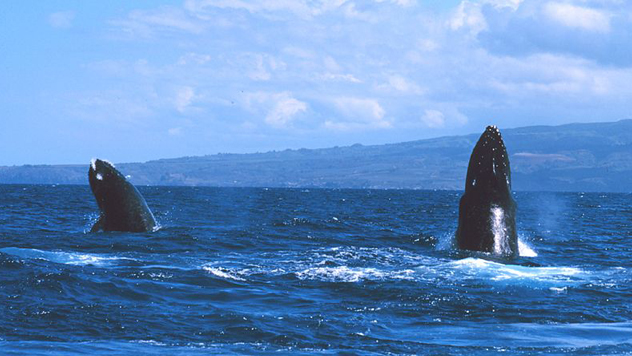 The Mingan Island Cetacean Study group has been using photographic techniques to study humpback whales for the last 16 years. In that time, they began to realize that female humpback whales not only make friends with one another but reunite each year. They remember their pals and even find them across the ocean and among other whales. This was quite a shocking discovery, as up to this point, scientists believed that humpback whales were generally unsociable towards each other.

When a female humpback meets her friend, they simply float along together, eating and enjoying each other’s company. These friendships seem to have benefits as female humpbacks who hang out in this way are healthier and give birth to more calves each year. However, friendships between females and males (or even male-male friendships) are mostly unheard of. For reasons that no one can explain, only the ladies like to hang out with each other.[4]

7 The Blue Whale Is the Largest Animal on Earth—Ever 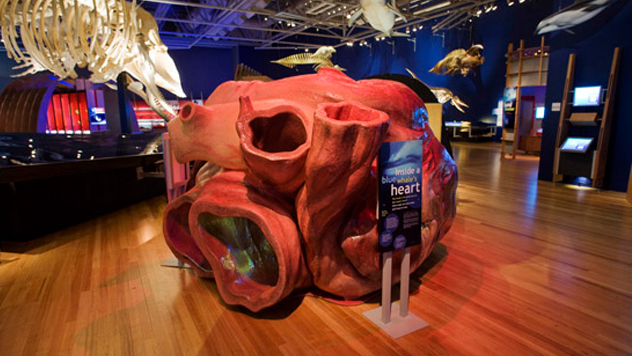 If most people had to guess the largest animal that ever existed, they would probably name some long-extinct creature like a mammoth or dinosaur. However, the largest creature isn’t extinct. It’s the blue whale, which can reach over 30 meters (100 ft) and weigh 180,000 kilograms (400,000 lbs). A blue whale’s heart can be as big as a small car and beats loud enough to be detected from 3,000 meters (2 mi) away. Its mouth is big enough to fit 100 people, and its arteries are so big that a basketball could float through them.[5]

And according to science, it’s getting even bigger. Don’t panic—the increased growth isn’t due to a toxic spill or gamma rays. It’s just good old global warming. Thanks to warmer ocean currents increasing the amount of krill found in their habitat, they’re bucking the trend of other mammals by growing instead of shrinking.

Whales can make a variety of sounds. One whale in captivity, a beluga called NOC, became so good at mimicking human voices that researchers thought that they were overhearing two people conversing in the distance. This went on for a while until the whale convinced a diver in his tank that someone was shouting at him to surface.

At first, the wider scientific community was skeptical. But NOC’s sounds, on closer review, were indisputably unusual for a beluga and shared the same acoustic patterns of human vocalization. NOC produced these sounds by unnaturally varying the pressure in his nasal tract and inflating a sac in his blowhole. Eventually, NOC stopped making these sounds altogether. Nobody really knows why. Perhaps hormonal changes made the sounds impossible as he aged, or maybe he simply got bored of doing it.[6]

NOC wasn’t a one-off. For example, reports in the 40s told of wild belugas who sounded like children. A captive whale called “Lugosi” at the Vancouver aquarium could reportedly say its own name.

Until fairly recently, whales were all thought to share the sleep pattern of dolphins, who sleep with half their brain, letting them keep one eye open for threats. However, a group of scientists in 2013 following sperm whales fitted with location tags discovered something very different and bizarre.

They found the whole pod just off the coast of Chile with their bodies completely vertical to the surface of the water and their heads just bobbing at the surface. The scientists could get right into the middle of the pod and could even nudge one of the whales. At that point, all the whales sprung to life and took off. They had been sleeping.[7]

This means that sperm whales sleep in one of the weirdest ways known within the animal kingdom. We think that they dive down and grab snatches of sleep that can last up to about 12 minutes and then slowly drift to the surface head-first. Also, for some reason that remains unknown, they only sleep between the hours of 6:00 pm and midnight.

Now, whales are pretty fatty mammals. And, we know that baby blue whales grow by about 3.7 kg per hour (8 pounds) and drink around 225 liters (950 cups) of mama’s milk per day! Well, it turns out these stats are related because whale milk is really fatty. And by really fatty, I mean up to 50% fat.[8] That makes it about the texture of toothpaste. Yum! 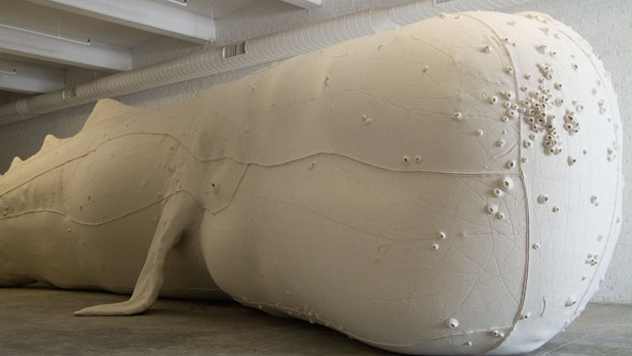 Most people nowadays would consider the idea of a vindictive whale taking revenge upon whalers as ridiculous fiction. However, Herman Melville based his idea for Moby Dick on real events and a real whale named Mocha Dick. The event, which Melville read about, happened around 1820 when Mocha Dick hit and sunk an English whaling ship. The crew landed on a deserted island where they were forced to resort to cannibalism.

Contemporary descriptions of Mocha Dick pretty much match up with Melville’s. He was a white albino whose spouting sounded like a continuous roar. However, accounts from the time make him sound even more terrifying than his fictional namesake. He was covered in barnacles and was usually sighted still trailing harpoons and rope from encounters with whalers who’d failed to kill him.[9]

Scientists studying humpback whale songs in 2011 discovered something very odd. The rise and decline of an individual whale’s song are very much like that of a pop song.

In any area shared by whales, everyone sings the same song. Over time, the song will change, and if the new song is catchy enough, it will spread to other populations of whales. When a new whalesong comes out, it’s sometimes a sort of remix of the previous song. And that’s not just a gross oversimplification—a researcher from the University of Queensland who has been analyzing this odd trend described it as “like splicing an old Beatles song with U2.”[10]

Other times, the new song can be completely original. The more popular songs act like chart music, rising in popularity as they’re sung by more whales and then travelling eastward to other whale populations.

1 Whales Adopt Other Animals and Objects 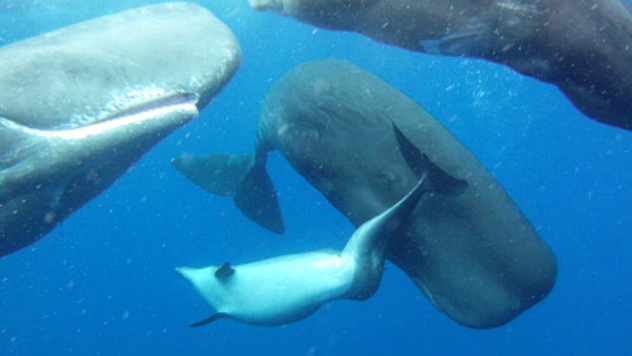 Not all whales are as violent as Mocha Dick. Most are usually quite gentle, even to other species.

For example, in 2011 a pod of sperm whales adopted a bottlenose dolphin born with a deformed, s-shaped spine. The dolphin’s pod presumably rejected him due to his deformity. Logically, this would make the slower-moving whales very attractive to a social animal like a dolphin. Yet, experts are still puzzled as to why the whales so readily accepted it as a member of the group.[11]

Similarly, but on a sadder note, female beluga whales have been known to turn objects into surrogate babies. Belugas in the wild have been seen carrying planks, other small objects, and even complete caribou skeletons on their heads or backs and treating them like calves. 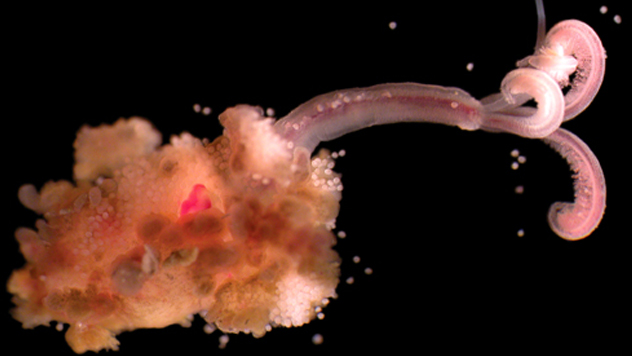 Whales have the biggest bones on the planet. Without someone disposing of them, the sea floor would be cluttered with whale bones forever. Luckily, there’s a creature that handles that job: the zombie worm.

The zombie worm’s scientific name is Osedax mucofloris, which literally translates to “bone-eating snot flower.” It’s an appropriate name: They burrow into whale bones and develop a root system, and the only exposed bits are covered in mucus that looks like, well, snot.

As if that weren’t weird enough, the zombie worm has no mouth, so its skin produces acid to break down bones. It then feeds off the protein and collagen the bones release. But the worm doesn’t have a digestive system or anus either, making it even weirder and deepening the mystery of exactly how it processes the stuff the acid releases. The best guess so far is that the zombie worm absorbs the collagen and protein through a symbiotic parasite that exists within its body.[12]

So, the zombie worm is an acid-throwing spit monster that feeds on bones and has parasitic creatures living inside it. We’ll never complain about spiders again.

Aaron has written for Cracked and Listverse. Feel free to add him on Twitter