Although they’re one of the most universally recognized animals in the world, foxes are actually quite a mystery. They commonly feature in our popular culture, and your nearest forest is probably home to quite a few of them. We may even know what the fox says. But, aside from that, what do we really know about these cute, cunning creatures? 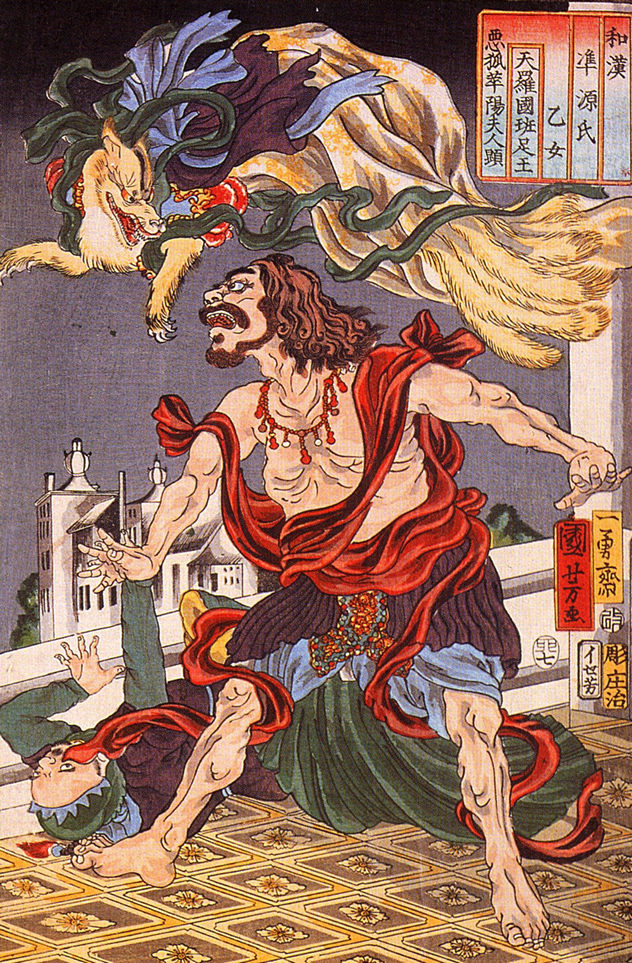 Foxes symbolize cunning and wisdom in many cultures. Oriental cultures—the Japanese and Koreans in particular—revere the animal so much that their legends even say it can achieve enlightenment. This transforms them into nine-tailed foxes—mystical creatures that have magical powers that let them transform into human beings at will.

Sadly, these awesome legend foxes are bad news for real humans. They suffer from a curse that forces them to eat human livers to survive. However, the nine-tailed foxes themselves are not cool with the situation, and actively try to change their fate: Once every millennium, a special “thousand-year fox” is born among the nine-tails. If they manage to grow him to a certain age and sacrifice him while he’s still a virgin, the curse is lifted. Too bad every attempt so far has been unsuccessful, because thousand-year foxes keep falling in love with humans.

Of course, like all good myths, the legend of nine-tailed foxes has many variations. Some say they’re spirit advisers that appear to rulers at times of significance, others maintain they’re real, dangerous animals that eat people . . . but that by capturing and eating one you can become immune to witchcraft. 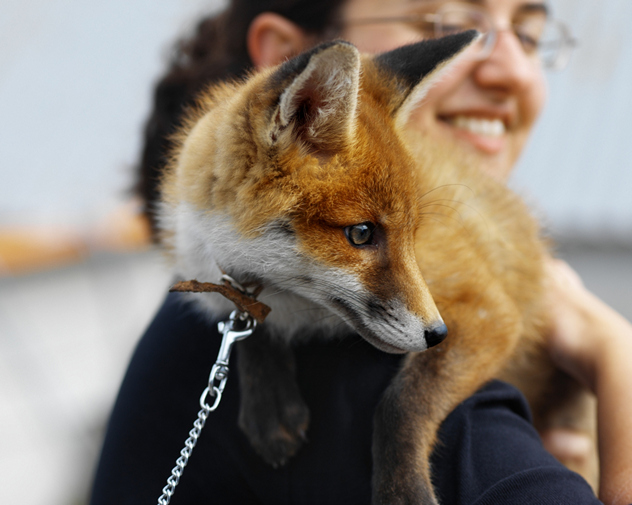 Foxes are cute, clever, and playful, so it makes sense people have looked into domesticating them. But although YouTube is full of videos about pet foxes, they’re usually no tamer than, say, “pet” hyenas or leopards: They’re wild animals that are used to the presence of man.

Still, although actual domesticated foxes are very rare, they do exist: In the 1950s, a Soviet geneticist started experimenting with fox breeding, eventually managing to create completely tame foxes. His Institute of Cytology and Genetics in Novosibirsk, Siberia is still functional and, in fact, the only place in the world where you can get true, domesticated pet foxes. They are expensive (roughly US$8,000) and quite different from your average pet dog, but they do learn tricks and commands, and are said to make very nice pets.

However, before getting one, you should remember that even pet foxes have a very strong digging instinct—they will absolutely attempt to dig through your floors and carpets, if you can’t provide them an outdoor space. Also, if your new pet happens to have a little “accident,” be prepared to burn your furniture: Fox urine is said to smell at least as bad as a skunk. 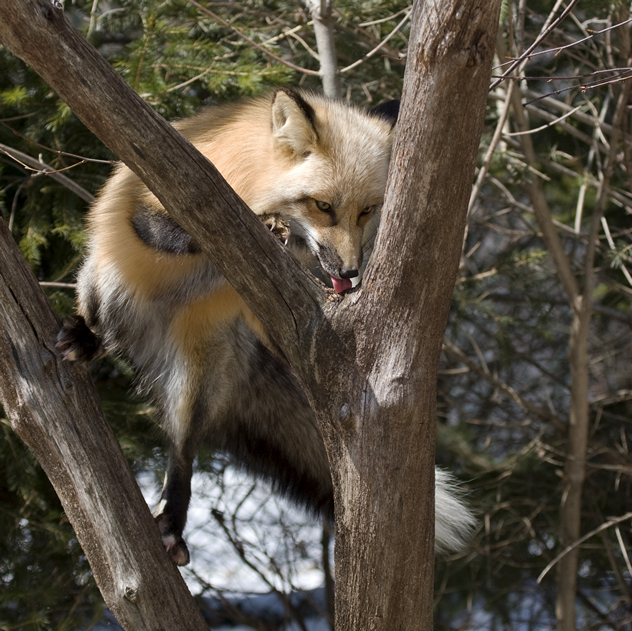 Despite being a canine species, foxes actually resemble cats more than dogs in many ways. Their pupils are catlike, vertical slits, which gives them excellent night vision. Many foxes are also excellent climbers, routinely scaling trees and roofs to stalk birds and squirrels. Some even sleep in trees. Their walk is very elegant and agile, much like a feline’s. When you look at smaller details, the similarities get even stranger: Like cats, foxes have spine-covered tongues and extremely sensitive whiskers (on both face and wrists) that help them maintain balance.

Grey foxes, the most agile and catlike fox species, even have semi-retractable claws. They are known to scale trees at an amazing pace, and sometimes they even use abandoned hawks’ nests as secure, makeshift dens. This masterful climbing ability comes in handy, when the larger red foxes venture in their territory: The trees can offer the grey fox a handy breather from their annoying big brother. 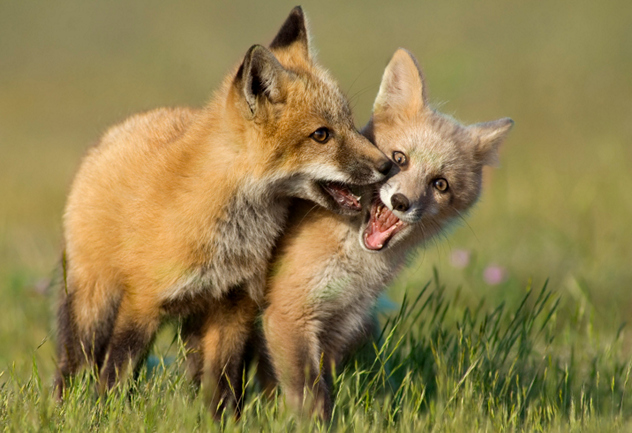 There are few sights more endearing than a litter of fox babies. However, the life of young foxes in the wild is not all fun and games. The pups (of which there can be anywhere between one and 10 in a litter) are born blind and aren’t able to open their eyes until they’re roughly two weeks old, so they are easy prey if the mother can’t defend them. After one month, the pups slowly start eating pre-chewed food that the mother regurgitates for them. Luckily, the fox male stays with the mother and the litter, helping to find food for the many mouths to feed.

After about seven months, young foxes leave the den in search of their own adventures and the parents wander off to do their own thing—that is, until the circle of life begins once again during the next mating season. 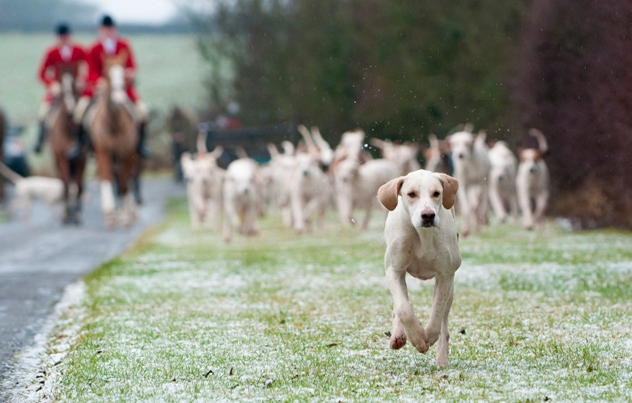 It is impossible to discuss foxes without bringing up the subject of British foxhunting. This brutal tradition, where foxes are chased by hounds and riders, is beloved by some and condemned by many others.

The history of foxhunting is thought to date back to the 15th century, when it was enjoyed as a sport similar to stag and hare hunts. A 19th-century hunter, called Hugo Meynell, developed the “sport” into its current form of upper-class entertainment (and a symbol of the Old British Empire).

Unsurprisingly, the status of foxhunting is a source of heavy debate between animal rights activists and traditionalists. Although the practice of hunting foxes with dogs (except for pest control purposes, and only with two dogs at most) has been outlawed for the past nine years, recently David Cameron—Britain’s Prime Minister himself—has publicly endorsed easing the ban. He’s not proposing the country brings back foxhunting in its full glory—just that farmers are able to use more than two dogs for flushing out foxes in certain situations. Still, many see this as a disturbing possibility for the practice of formal foxhunting to sneak back.

Foxes are naturally curious animals. As such, they occasionally check out other animals—even the ones that would, in other circumstances, be their bitter enemies—and make friends with them. For instance, dogs (and, to a lesser extent, cats) tend to have an antagonistic relationship with foxes. This does nothing to stop individual foxes from sometimes approaching and playing with both cats (opening video) and dogs, to the point where the fox and the other animal actually befriend each other.

Recent research has found that one of the earliest animal species foxes have befriended may actually be . . . us humans. A 16,500-year-old cemetery in northern Jordan was found to contain a grave with the remains of a human male and his companion fox. Seeing as the grave is roughly 4,000 years older than the earliest known human-dog burial, it would appear that foxes were playing around with humans long before we got around to domesticating dogs.

A perfect ball is not a thing that’s easy to find in nature. Because of this, the playful foxes sometimes feel drawn to the balls we humans use in our sports. The results can be both frustrating and hilarious.

A Swiss golf court was recently stalked by a fox who would happily steal every golf ball it could get its paws on, regardless of whether the balls were still in play or not (opening video). In another instance, a French petanque player found his play balls disappearing one after one, only to find out a young fox was grabbing them at night. The fox had been so interested in the balls, it had even completely ignored a nearby henhouse.

Sometimes, even people who are actively playing with the balls aren’t enough to scare the fox: Here’s a video of a fox who ran on a soccer pitch and started gleefully stalking the balls people were training with.

Foxes (red foxes in particular) are omnivores, and they appreciate the occasional rodent, or bird, in their diet. They specialize in a variety of relatively small prey, and have a number of different hunting techniques for different animals. Insects form a large part of a fox’s diet, but as they are just casually foraged and snapped at while they happen to come by, the fox rarely finds this challenging enough.

Bigger prey, such as rabbits, is approached with stalking: The fox lies flat on the ground and silently creeps towards the prey, until a short chase ensues. If the object of stalking is a bird, the fox finishes the chase with a massive leap that often catches the prey midair.

The most famous hunting technique in the arsenal of the fox is probably the mousing leap (opening video): A fox moves slowly and silently, listening intently until it detects the sound of a mouse. Then, it suddenly launches in the air, landing directly on its unlucky target. Foxes are so good at this missile-like maneuver that they can even locate and catch their prey when it moves under more than a meter of snow. 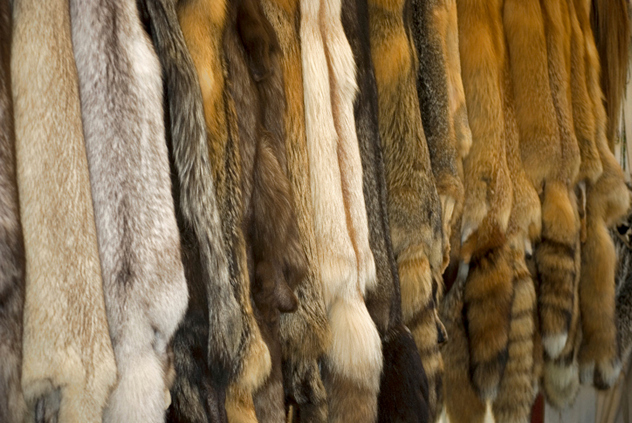 Like many other animals with glorious fur, foxes have often been threatened by people who wish to turn them into hats and coats. Even today, fox fur is a valuable commodity and, for that reason, foxes are hunted and trapped in various parts of the world. Some even attempt to lure foxes on gun ranges, using whistles that imitate the sounds of small rodents.

The historical interest in fox fur is understandable in cold places like Siberia, where people had to do what they could to stay alive. However, the American fox chasing traditions are a little more difficult to understand. Early fox hunters started hunting the animal not only because its fur was valuable, but also because it was so hard to hunt: Unless it succumbed to a trap, a red fox could easily evade captors with its agility, short bursts of explosive speed, and a fast pace called the “fox trot” that it could keep up all night. As a result, the hunters became completely obsessed with the animal, breeding increasingly efficient dogs to help them with the hunt. 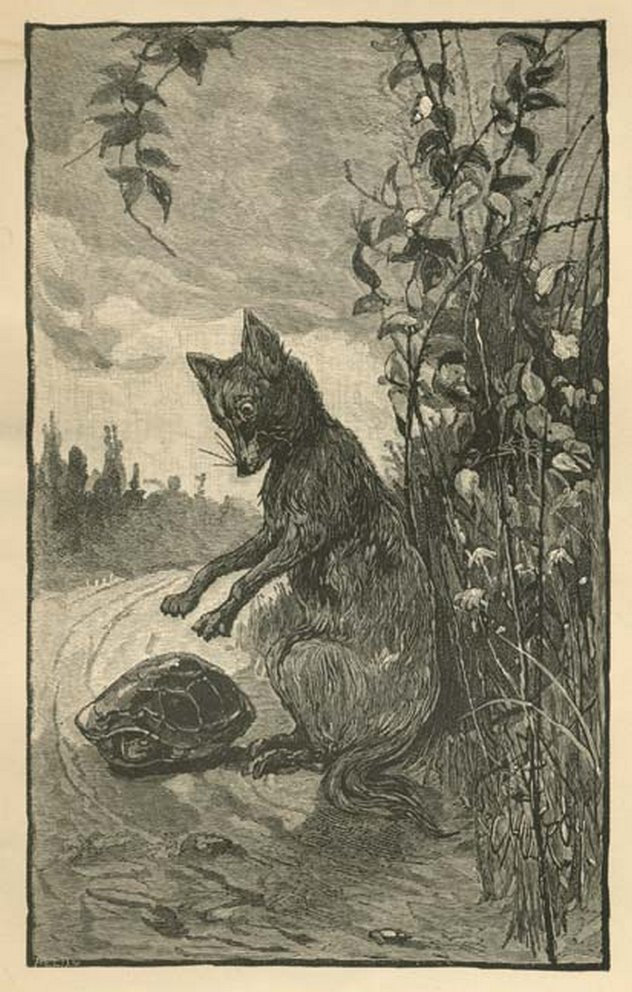 Because of their gleeful, yet evasive nature, foxes have played a part in the folklores of virtually every area they have spread to. Their mythological roles range from the Icelandic gun-disabling, vicious fox-cat demons—Skugga Baldur and Skoffin—to the legendary Brer Fox of American folklore. Although they’re usually employed as a trickster figure of some sort—in the middle ages, they sometimes replaced cats as witches’ familiars in many a folktale—many cultures also associate them with divine powers: The Finnish thought the Northern Lights were caused by foxes, and as a result they call them “fox fires” even today. Many legends also give foxes shapeshifting powers.

The most influential user of foxes in folklore is probably Aesop, the Greek storyteller whose fables often used talking animals as symbols of certain traits. His stories, such as “The Fox and the Grapes,” popularized the use of foxes as shorthand for pride, deceit, and individuality—attributes that are still attached to the species in modern popular culture.