When you eat an orange or a pineapple, chances are you probably don’t think about how the fruit came to be on this Earth. But it turns out that people have been thinking about that for centuries, and many of the origin stories for various fruits are pretty dark. We’re not sure what kind of people first associated severed heads, testicles, death, famine, and cannibalism with some of our favorite fruits, but we’re pretty sure we might never look at a fruit salad quite the same way again. 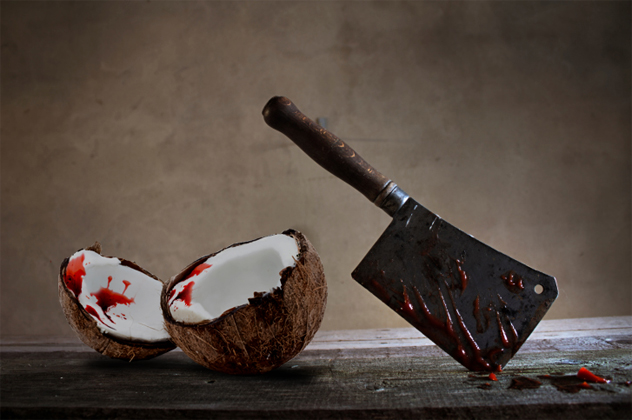 There are a number of myths about how the coconut came to be, and, like most good myths, they all involve violence. If you look at it the right way, the features of a coconut can take on an eerily human appearance with two eyes and a mouth. So clearly, it grew from a severed head—and the stories that say just that are so numerous, we have to wonder if there’s some truth to it. In New Britain, the severed head came from a boy who had been completely eaten by a shark—save for his head, which was buried and sprouted into the first coconut tree.

An Arapesh myth says that the head belonged to a man who killed a woman for walking ahead of her husband; the man was then, in turn, killed and beheaded by children. A myth from the Admiralty Islands tells of two brothers who steal a canoe from the devil to go fishing. The devil chases them, and they hold him off for a while by throwing the fish they caught into the water; eventually the fish run out, and the younger brother cuts his older brother into pieces, and makes it to shore with just his head left.

In Burma, the donor of the head is a man decapitated by a king who has grown tired of his pranks, and in New Guinea, the head is surrendered voluntarily by a fisherwoman who removes her head to allow fish to swim into her, then cannot find it again.

9 Apples And The Wedding Of Hera 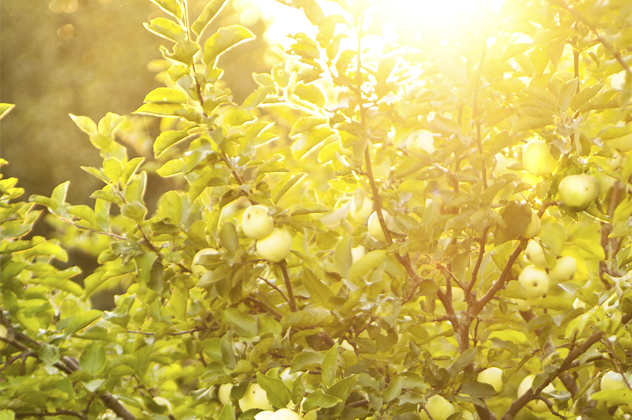 According to Greek mythology, the first apple trees were created by Gaia (also Ge), the Earth, as a wedding present for Hera. The first apples were golden, and the tree was put under the care of three minor goddesses called the Hesperides and a hundred-headed dragon named Ladon. Fairly well-known is the story of the 12 labors of Hercules, one of which was to steal the golden apples. He did, of course, killing Ladon in the process.

Perhaps less well-known is what the golden apples did. Kept in a garden in the West, the golden apples were said to cast their radiant glow across the sky as the Sun traveled below the horizon, creating the beautiful colors of the sunset. 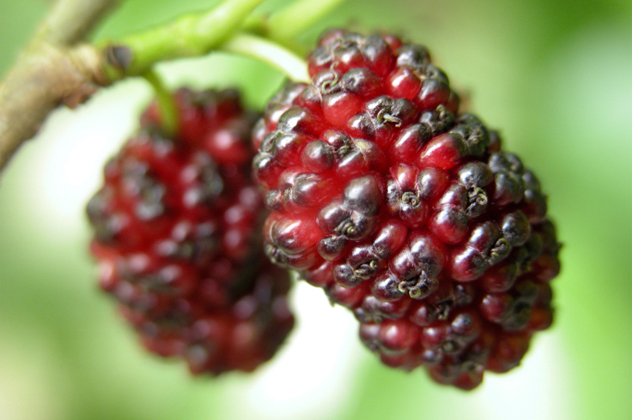 According to the legend of Babylonian lovers Pyramus and Thisbe, mulberries were once white, but turned red when they were stained with blood. The tragic love story starts when the pair were forbidden by their parents to marry. After carrying on their affair through a crack in the wall between their homes, they decide to meet in a field beneath a mulberry tree.

When Thisbe saw a blood-covered lion drinking from a nearby pond, she dropped her shawl and fled in fright. Her lover, finding the shawl and seeing the bloodied lion, feared the worst, and killed himself. His blood stained the white berries of the mulberry tree, and when Thisbe returned to find him dead, she too took her own life. Before she died, she saw the now-red berries of the mulberry tree, and said that they will forever be a testament to tragedy and love. From then on, mulberries were reddish-purple.

7 Elderberries And The Death Of Man 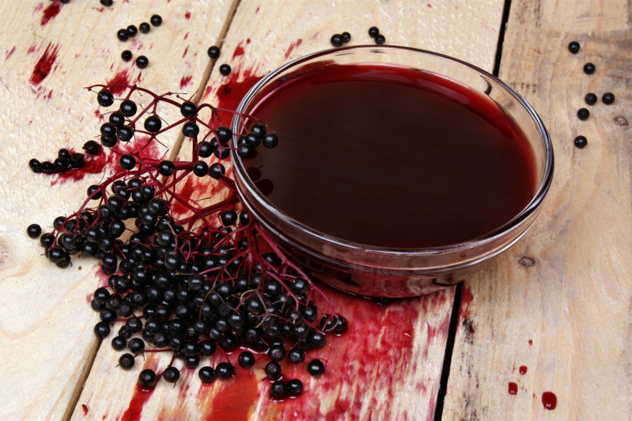 The Tsimshan are a group of Native Americans that lived on the Pacific Coast of Canada. Their myth of the elderberry bush serves to explain why humans live such short lives, and in fact how our life spans were determined. According to legend, the Stone and the Elderberry Bush were arguing over who got to bear children first. The Stone proposed a deal: If she gave birth first, humans would have a long life. But if the Elderberry Bush gave birth first, humans would have a much shorter life.

Both went into labor at the same time, but a wise Giant interfered. He went to the Elderberry Bush, touched her, and told her to bear her children; she, of course, went on to give birth before the Stone. This is why humans only live a short time, and why elderberry bushes are often seen growing on graves and in cemeteries. 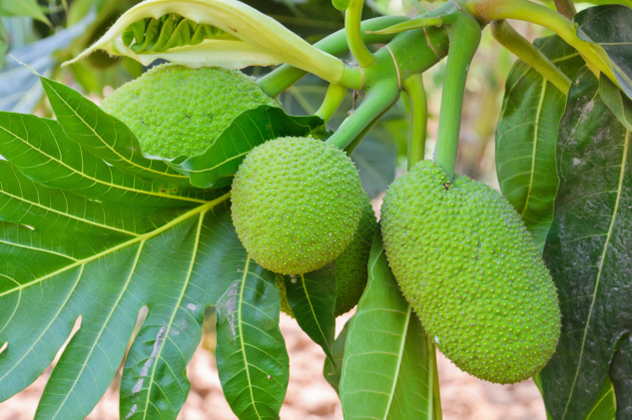 According to Hawaiian folklore, there are a couple different ways that the breadfruit tree was said to come into existence. In one version, a devastating famine seizes the island of Waiakea and takes the life of a man named Ulu. When Ulu dies, priests tell his family they should bury him beside a stream. A tree grows from his grave overnight, and in the morning his family finds it bearing fruit. The fruit, in turn, feeds those he left behind and sees them through the rest of the famine.

An alternate story involves a man who sacrificed himself for his family; after he was dead, a tree grew from his testicles. The gods—all 44,000 of them—tried the fruit and found it wasn’t just edible, it was tasty. Once they found out where the tree had grown from, though, they vomited up the fruit and the seeds, spreading it across the islands. 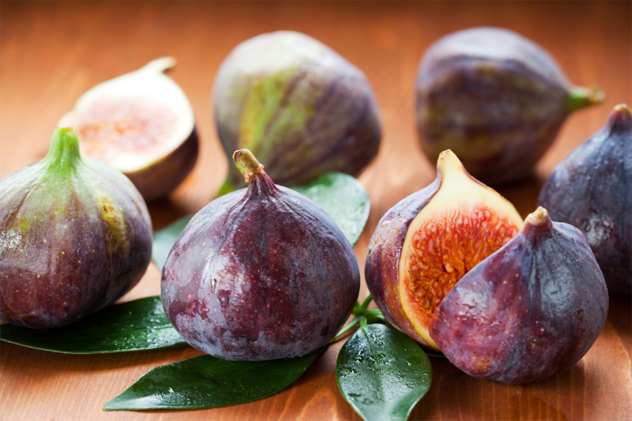 After her daughter was kidnapped by Hades, Greek goddess Demeter wandered the land looking for her. During her travels, she stayed at the house of a man in Attica, in Southern Greece. He welcomed her into his home and treated her kindly, and she thanked him for his hospitality by giving him the first fig tree.

Fig trees thrived in the fertile lands around Attica and Athens; here, Dionysus also has a strong connection with the fig. His name means “friend of the fig,” and this is not an innocent reference in the least. The fact that the fig’s appearance was similar to that of testicles certainly didn’t go unnoticed by the Greeks, and in fact the words for “figs” and “testicles” were the same. Part of the yearly festival to Dionysus included carving a giant phallus from the wood of a fig tree and carrying it around town.

4 Strawberries And The Gates Of Heaven 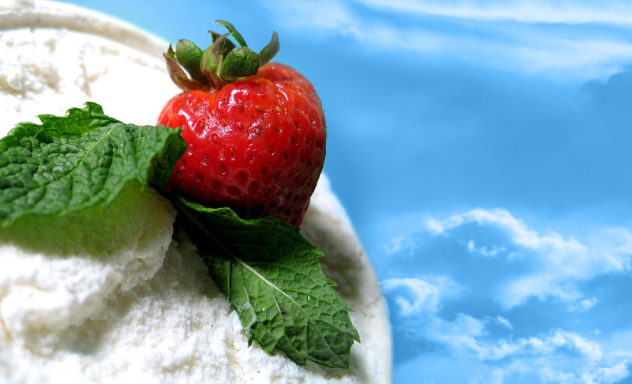 Strawberries were originally said to be the fruit associated with the Norse goddess Friga. But things didn’t start to get really weird until the spread of Christianity. And, like all things deemed pagan and heathen, strawberries were soon absorbed into the Christian mythos as the fruits of the Virgin. She was apparently a little jealous when it came to the strawberries—it was said that she required all strawberries be left for her. So strict was this rule that it was also added that anyone who approached Heaven with traces of strawberry juice on them would be denied entrance to paradise for eating this new holy fruit.

As if that wasn’t weird enough, there’s another explanation for this myth. When a baby died, it was said they ascended to heaven disguised from potential darkness as a strawberry. So anyone who ate strawberries might well be eating a baby—clearly, that in itself made it advisable just to stay away from them. 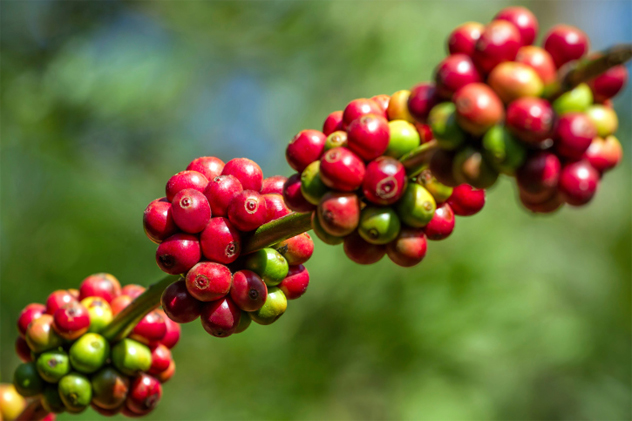 Ethiopian legend credits a boy named Kaldi with the discovery of the coffee berry. Kaldi was a goatherd, and was out watching over his goats one day when he noticed they were eating berries from a tree. After eating the berries, the goats became energized and would refuse to sleep at night. Kaldi took some of the berries to monks at a local monastery.

The monks promptly tried the berries themselves, and suddenly found they had a much easier time staying awake during their evening prayers. The monks shared the knowledge with each other, and soon everyone was partaking in the coffee berries to stay awake in church. From there, coffee spread to the Arabian peninsula, and a single goatherd changed the way we stay awake.

2 Poison And Eternal Life From A Mango 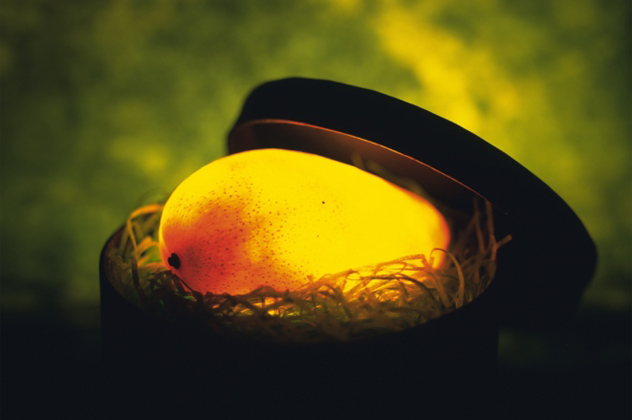 A legend that is told throughout the tropics is the story of how a magpie flew to the heavens and brought a mango seed back to his king. Once the tree bore fruit, the king ordered an old man to eat the first piece of fruit. That single piece of fruit had been poisoned by the venom of a snake that had dripped onto the tree as an eagle carried it overhead, and the old man died.

Horrified, the king killed the magpie. Much later, an old woman vowed to commit suicide after a lifetime of abuse; she ate a mango that wasn’t poisoned, and was given her youth back. The king could never bring himself to eat a mango, however, as he was overcome with guilt about killing the bird who had given him such a gift. 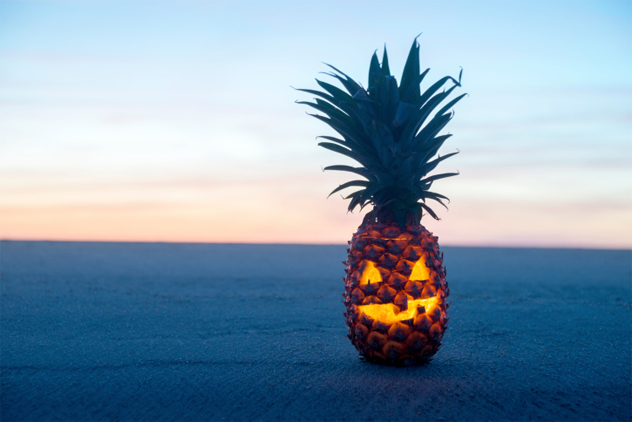 The story of how the pineapple came to be is a folk tale about a beautiful-but-lazy little girl named Pina. According to legend, the little girl was so selfish that any time anyone asked to borrow any of her things, she would say she couldn’t find them. If anyone asked her to do any work around the house, she would say she couldn’t find the cooking utensils or the cleaning supplies. When her parents and her sisters became extremely ill, she shouted at them and harassed them until they prepared her breakfast and went to work in the fields, accusing them of being lazy and useless.

When her ill mother asked Pina to boil some rice for her, she went through her usual routine of saying she couldn’t find anything. Her mother lamented that if she had a hundred eyes, she might actually be able to find things. Outraged, the girl dragged a sack of rice—the product of her father’s hard work in the fields—outside, cut it open, and realized she was no longer able to move. Pina disappeared, and was never found again. Her mother, months after recovering from her illness, was in the garden when she found an odd-looking fruit. Peeling the skin, she saw it had a hundred eyes, and realized her wish had come true.