There are many devastating natural disasters that will we see throughout our lifetimes. One of the worst are hurricanes. Hurricanes have been responsible for millions of deaths throughout history, and each year, we get to witness at least a few of these terrifying storms.

Even though there have been so many deaths due to hurricanes, there are also a lot of heroic survival stories. Some of the following people survived against all odds, and here are their amazing stories. 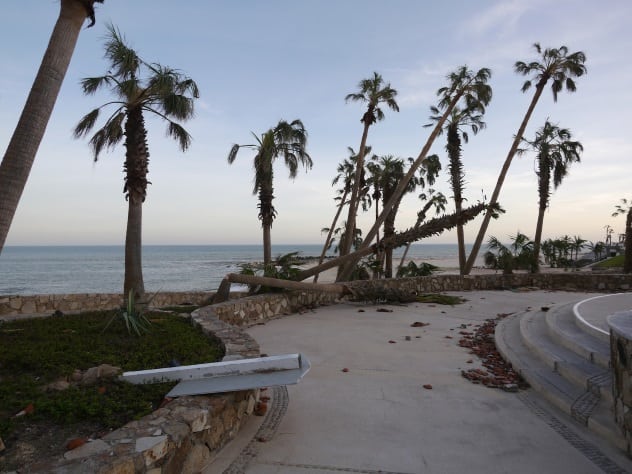 Jennifer Lowry survived Hurricane Odile in 2014. This hurricane hit Cabo San Lucas, Mexico. Hurricane Odile was a very unique storm. Back in September 2014, it was broadcasted that Odile would be near Cabo but that it would head out to sea and peter out, so residents and guests weren’t too alarmed by the hurricane nearing them. Unfortunately, the hurricane unpredictably changed its course, and because of this, it became a very severe storm. Since the people in Cabo were not expecting this magnitude of a hurricane, 18 people lost their lives, and many were very unprepared for the events that were about to occur. Lowry was one of them.[1]

Lowry was on a trip to Cabo with her friends when the storm hit. Her and many hotel guests were provided a safe place and shelter from the storm in the hotel ballroom. Even though Lowry was unharmed, many hotel guests who arrived at the ballroom had been cut up by broken glass. She also described the horrible sounds that she heard as the winds screamed by the hotel. Lowry and her friends had to stay an extra week in Cabo after the hurricane because the airport was completely destroyed. Even though this story is of a woman who was relatively safe throughout the hurricane, it still shows just how scary one of these storms can be if it suddenly changes course and intensity. 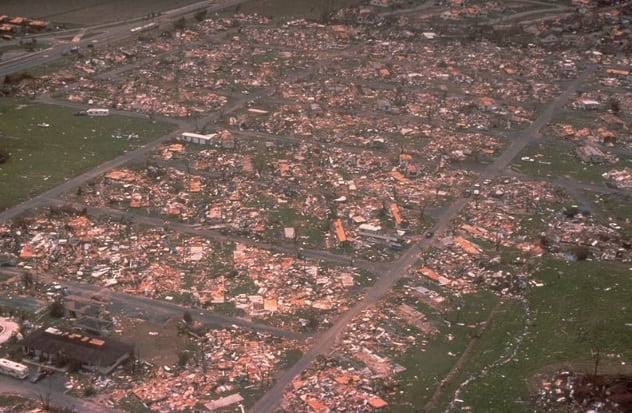 Isabel Ramos survived Hurricane Andrew in 1992. This hurricane hit Miami-Dade County, Florida, where Ramos is a resident. Hurricane Andrew was incredibly severe and was very devastating to Ramos. The night the storm hit, Ramos’s house was completely destroyed and fell apart around her. Ramos was able to find shelter with her dogs in her garage. She heard the howling wind and her house falling down outside her garage. She was trapped in her garage for hours and even had to hold up part of of the roofing to protect herself and her dogs.[2]

Ramos’s story shows just how devastating hurricanes can be and how you can pretty much lose everything you own. It also shows how important it is to keep yourself safe during a storm like this and to not worry about your other possessions.

The Smiths are a married couple who survived Hurricane Harvey in 2017. Not only did they have to brave harsh conditions, but they are also on this list for another reason: Annie Smith went into labor during the peak of the hurricane. Harvey was one of the worst storms the United States has ever seen; imagine having a baby while that was going on.

The Smiths reached out to the director of Annie’s fellowship program, who contacted their local fire department for help. The fire department sent a truck to the Smiths’ house. The truck had to go through many feet of water, and the rescue was very difficult for the firefighters. They, along with neighbors, had to form a human chain to rescue the Smiths. Eventually, the Smiths made it to the fire truck.[3] Annie gave birth 12 hours later. 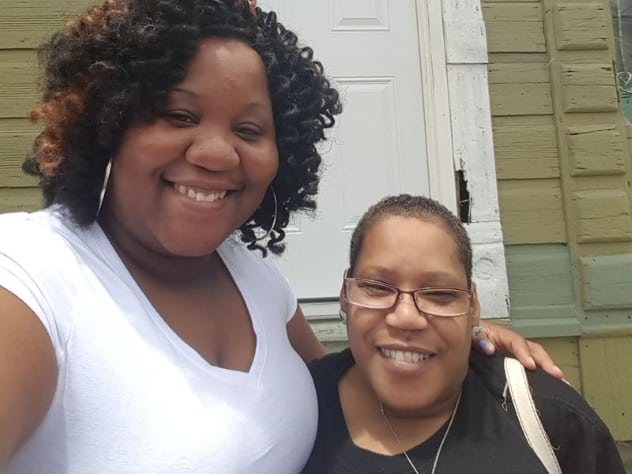 Jaimie Cummings is a New Orleans resident who survived Hurricane Katrina. Cummings was 14 at the time, and she was visiting her mother in the hospital during the storm. While she was visiting, the hurricane hit its peak, and all patients were rushed to the hallways. Glass windows were breaking all around them when police arrived. There were boats that would take all patients who weren’t bedridden out of the hospital and to safety. Those patients who were bedridden or too sick to move were left behind.

Cummings and her mother both survived, but many patients and workers at the hospital lost their lives to Hurricane Katrina that day.[4] This story shows how lucky some survivors were that rescuers showed up at the right time. If it wasn’t for the police who came to save the patients, Jaimie and her mother might not have been alive today to share their story. 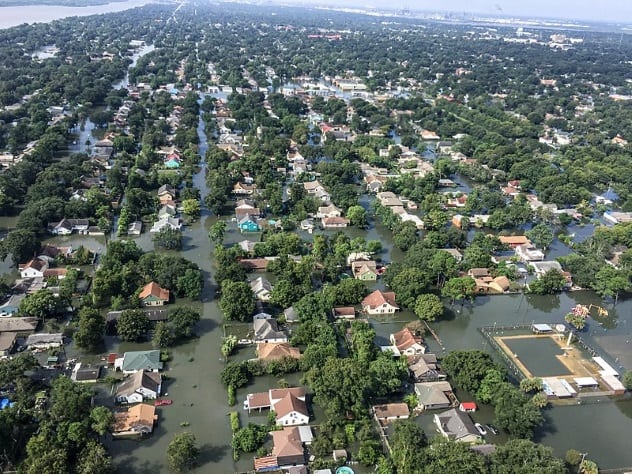 In 2017, after Hurricane Harvey hit, a mother and her daughter were found floating in the floodwaters. The child was just a baby, so she could not swim yet. The mother used a backpack and her own body to help the baby float. She did everything that she could to keep her daughter above the floodwater so that she would not drown. After rescuers found the mother and daughter, the two were rushed to the hospital.

At the hospital, the mother died, but the baby survived. The rescuers said that if it wasn’t for the bravery and actions of the mother, the baby would not have survived the hurricane.[5] Even though this was still a tragic ending, it really shows how far a mother’s love can go. These two were trapped in the floodwater for days, so it shows the strength of the mother in trying to keep her baby alive.

5 A Different Side Of The Storm 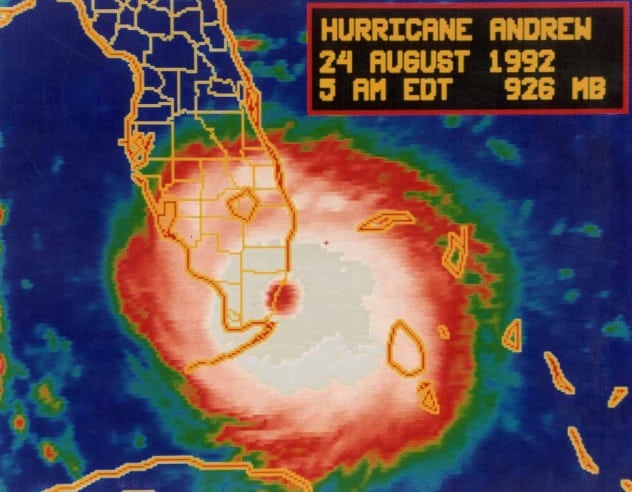 The Mullins family survived Hurricane Andrew. The=y owned a fish shop in Perrine, which is where they took cover for most of the storm.[6] They were eventually rescued from their shop, and they all lived. This story isn’t really about their survival during the terrifying weather conditions but about how people act during a huge storm like Hurricane Andrew.

During the hurricane, there were tons of looters all over the streets. The Mullins family spent most of their time during the storm defending their store from looters. There was a lot of fighting in the streets and even gunshots. The family spent their time not only being terrified by the storm but also by the people in the streets who were trying to break into their shop and maybe even harm them. This story shows that during hurricanes and other natural disasters, people do unspeakable things, sometimes to ensure their own survival, and it’s not only the storm that we have to be worried about if a hurricane hits. 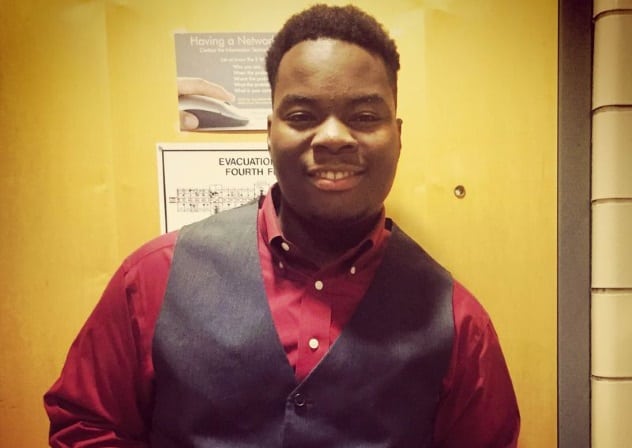 Shawn Kelly is another survivor of Hurricane Katrina, and he was only ten years old when the storm hit. During Katrina, Shawn was with his mother and father in their apartment. As the storm started to move in, they realized they were in great danger in their building. They quickly moved across the street to a retirement home and were able to reach higher ground. Shawn’s family and others survived on the roof of the retirement home for days before they were rescued.

They were eventually rescued by a helicopter that brought them to Dallas. Even though they were rescued, the helicopter only took women and children first, so Shawn’s father was left behind to wait for another one. It was two months before Shawn and his mother found his father again.[7] This story had a happy ending of a family being reunited, but unfortunately, many families who were in Hurricane Katrina lost loved ones. The Kellys were very lucky to have all survived this terrifying disaster. 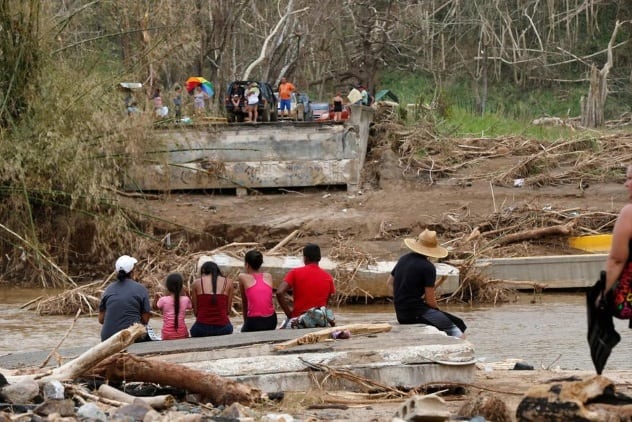 In 2017, Hurricane Maria hit Puerto Rico hard. Thousands of people lost their lives, but the survivors now have some terrifying consequences to deal with. Puerto Rico is on this list instead of one person to show the hardships that survivors have to go through after a hurricane. Every place that is rattled by a hurricane experiences fallout after the storm has passed, but Puerto Rico is a very extreme case.

A month after the hurricane, 80 percent of the island was still without electricity, and even today, parts are still without power. The survivors also struggled to find clean drinking water and food. This lead to even more deaths. Not only did the survivors have to go without basic needs, but they also had to worry about rebuilding their whole lives and saying goodbye to their loved ones.[8] 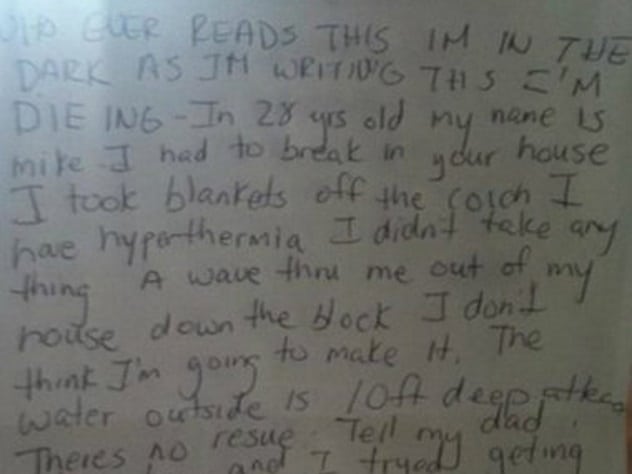 Mike was a Hurricane Sandy survivor. Hurricane Sandy (also known as Superstorm Sandy) struck the East Coast of the United States in 2012. Mike was from New Jersey, which was hit hard. Mike didn’t evacuate the city during the storm and realized he was in grave danger when his house started flooding. While trying to evacuate his home, he was swept away by the current. The floodwaters took him down the street, where he was able to seek shelter in a neighbor’s house. There, he did everything he could to stay warm because he was suffering from hypothermia at that point.

He took blankets to warm himself up and even left a note to call his dad because he did not think he would live. Luckily, Mike was rescued and did make it through the hurricane.[9] This story shows how little things, such as blankets, can make a big difference in someone’s ability to survive. 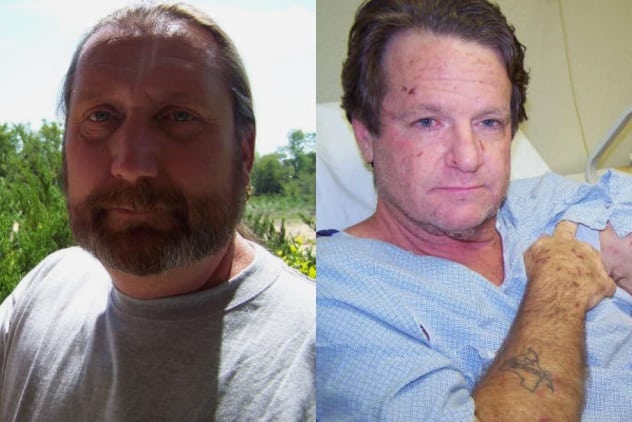 Both of these men defied all odds when they survived Hurricane Ike in 2008. They were both swept out of their Texas beach houses and carried 23 kilometers (14 mi) away by the current, crossing East Bay and ending up in Chambers Country. Surviving that was crazy enough, but afterward, they had to survive for hours before they were rescued. The men were able to find soft drinks, life jackets, and a kayak in the debris near them from the hurricane.[10]

Without their bravery and a little bit of luck, these two men would not have been alive today. It just goes to show that even in the worst of times, when all hope seems lost, that you can find the means to survive in the strangest places.