In the ancient world, the possibility of a violent, premature death was always around the corner. Certainly, it could happen to the ordinary people who died in the millions from famine, disease, or war. But it was also a frequent visitor to the rich and powerful who were often bumped off by their enemies, their friends, or even their families.

The list that follows details just 10 examples of particularly gruesome deaths in the ancient world. They range from the brutal murders of Roman emperors by their own sons to the strange case of the “mummy’s curse.” 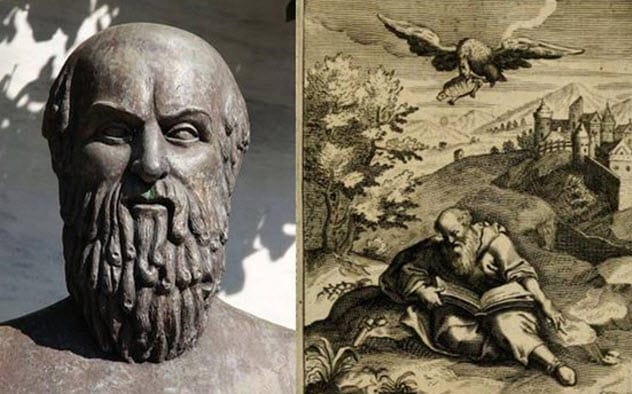 Aeschylus, the father of Greek tragedy, was noted for such works as The Persians and the Oresteia (still frequently performed today). As such, one might expect a tragic ending for Aeschylus. But the way this ancient playwright kicked the bucket would be more suited to a slapstick comedy.

According to legend, the Athenian author was killed when an eagle dropped a tortoise—seriously, a tortoise—on his head from a great height while Aeschylus was out for a stroll. Modern historians have speculated that the bird in question may have mistaken the writer’s bald crown for a rock on which it intended to smash the tortoise’s shell.

To add an element of the supernatural, the Roman historian Pliny the Elder wrote in his Naturalis Historia that Aeschylus had been staying outside due to a prophecy which predicted that he would be killed by a falling object! Surely, a great tragedian should have known that you can’t run away from your fate.[1] 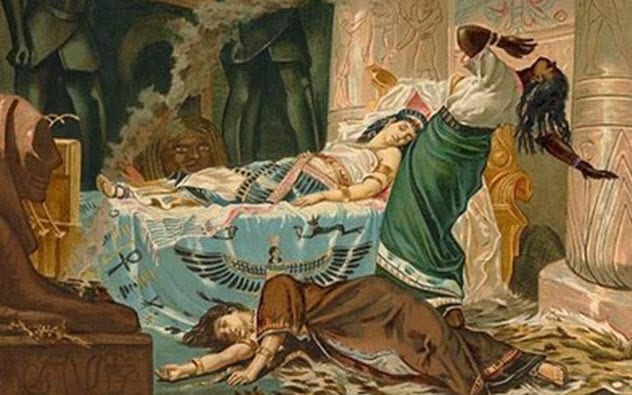 According to historical accounts, Cleopatra, the last active pharaoh of ancient Egypt, committed suicide in a particularly grisly fashion. She held a poisonous asp (a kind of snake) to her breast until it fatally bit her, injecting her with deadly venom.

But did this legendary suicide really happen?

Many have speculated that this version of events was merely a cover-up of the famously beautiful queen’s murder by her political opponents. Only 50 percent of asp venom is injected with a single bite, so she could have easily survived.

Meanwhile, two of Cleopatra’s maidservants were found dead alongside her, suggesting foul play. Maybe Octavian (later Augustus, the first emperor of ancient Rome) had her murdered to take over her empire?

History cannot tell us for sure.[2] 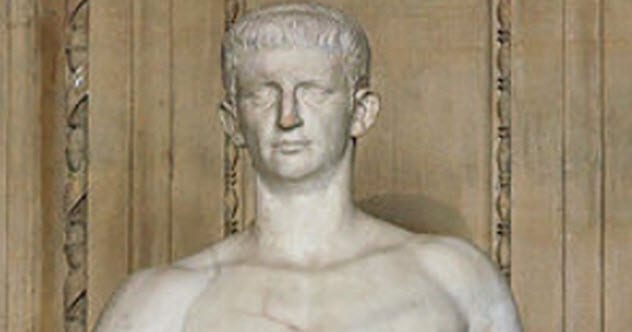 Emperor Claudius is probably most famous for his conquest of Britain in AD 43 and for his central role in Robert Graves’s novels I, Claudius and Claudius the God, later turned into a TV serial for the BBC. Fewer people, however, know of his untimely death—poisoned by his own wife, who was also his niece.

According to Roman historian Suetonius, Claudius’s niece Agrippina, was desperate for Lucius Domitius Ahenobarbus (aka Nero), her son from a previous marriage, to ascend to the imperial throne. So she served Claudius a dish of poisoned mushrooms.

When this failed to finish him off, the power-hungry Agrippina fed him a poisoned gruel and finally administered a poisoned enema. Nero ascended to the throne and proved to be one of the cruelest rulers that Rome had ever known.[3] 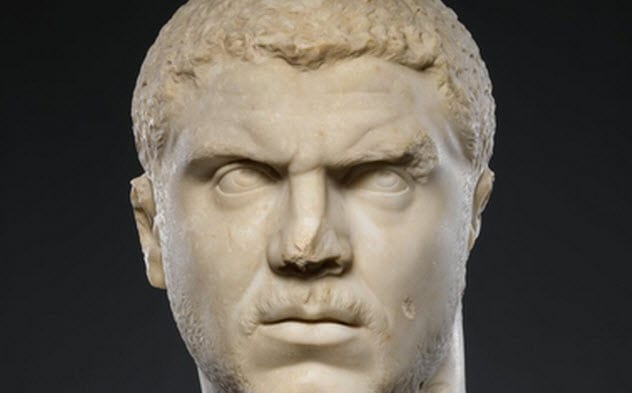 Like so many other Roman statesmen, Caracalla had a hand in his fair share of murders before he was assassinated. According to his biographer, this emperor, who ruled alone from AD 211–217, was killed by his own bodyguard. It happened while Caracalla was urinating by the side of the road.

Don’t feel too sorry for him, though. Caracalla had previously ordered the murder of his own brother, Geta, who was stabbed to death in their mother’s arms.[4] 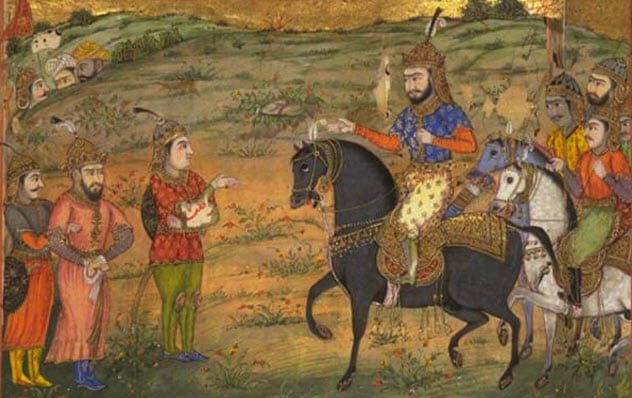 Just one more Roman emperor dying horrifically? Go on then.

Valerian’s death was probably the most gruesome of all. After being captured by the Persian king Shapur I, Valerian was treated in humiliating fashion. Historian Lactantius described how the Roman emperor was used as a footstool for Shapur to mount his horse. Unsurprisingly, Valerian wasn’t pleased with this and offered the Persian a hefty sum of gold for his release.[5]

Shapur, however, wasn’t having any of it. He expressed his disdain for the emperor’s offer by pouring molten gold down his throat before flaying him, stuffing his skin with straw, and hanging this trophy in his royal palace. It doesn’t get much rougher than that. 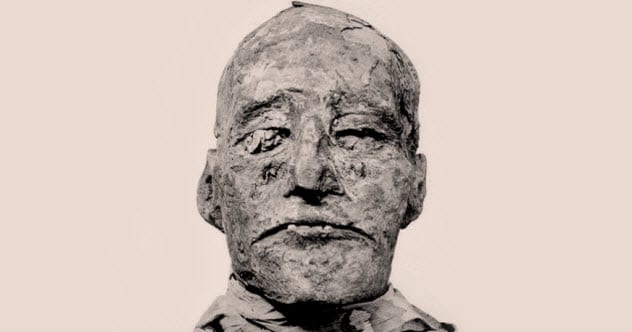 It wasn’t just Romans who could die in grisly fashion. The ancient Egyptians knew how to kill in style as well.

In the case of Pharaoh Ramses III, it all stemmed from a dispute over succession to the throne. Ramses’s son Prince Pentawere, who was not directly in line for the throne, is thought to have slit his father’s throat and cut off his big toe for good measure.[6]

The body of Pentawere is thought to have been recently found by archaeologists. The contorted posture and pained expression of the corpse suggested to some a long, slow death by suffocation after being buried alive. 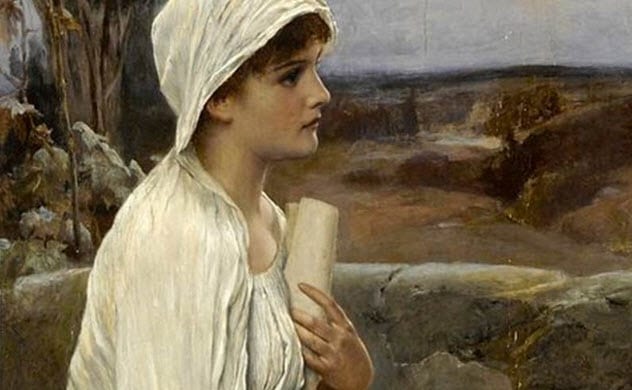 Hypatia was not a bad person—neither a murderer nor a schemer. She was merely caught in the wrong place at the wrong time. She was a brilliant mathematician and Neoplatonist philosopher when very few women were able to take part in intellectual pursuits. Unfortunately, Hypatia was also caught in a power struggle in fifth-century Alexandria.[7]

Christian supporters of Bishop Cyril disapproved of Hypatia’s supposed closeness to Orestes, the governor of Alexandria, and showed this disapproval in the most graphic way possible. A mob of Christian zealots dragged Hypatia from her house, stripped her naked, beat her to death with roof tiles, and then set her corpse on fire. 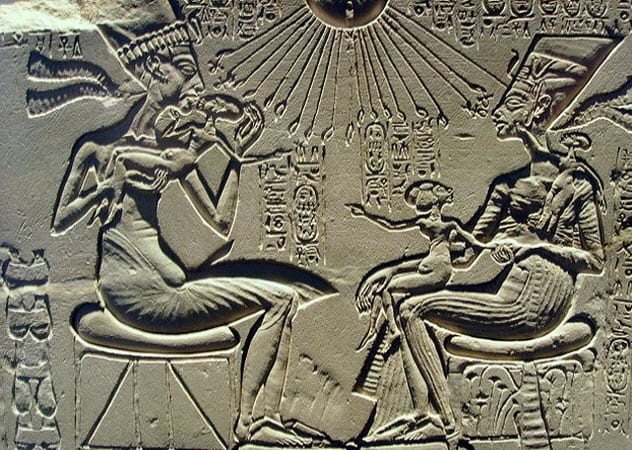 Pharaoh Akhenaton was not a great example of kingship and is probably best known today as the father of Tutankhamen. He is thought by many historians to have fathered his own grandchildren after sleeping with his daughter, but even that wasn’t messed up enough for Akhenaton.

Growing jealous of his daughter, he ordered her death after getting into an argument with her. History does not record the subject of their disagreement, but it must have been serious. The pharaoh went as far as cutting off the hand of his daughter’s corpse so that they wouldn’t cross paths in the afterlife. Ancient Egyptians believed that the soul could not reach the afterlife if the body was not intact.[8] 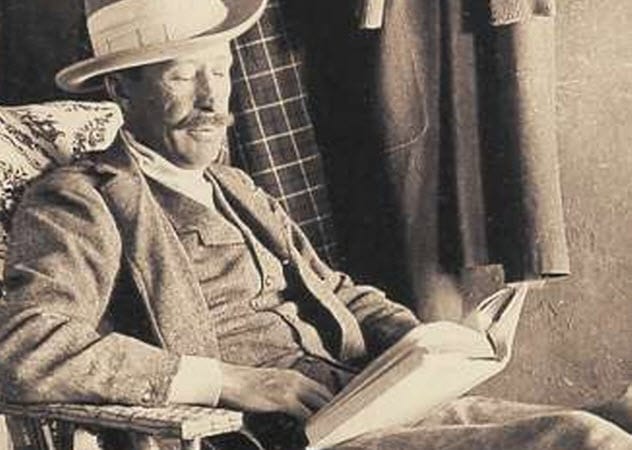 Okay, so this isn’t technically a death in the ancient world, but it still has a surprising and spooky link to ancient Egypt. Lord Carnarvon was the financial backer of the 1922 expedition which recovered the treasure from the tomb of King Tut—and just one of the several expedition members to be struck down by the “mummy’s curse.”

When King Tutankhamen’s tomb was excavated, the ominous inscription “Death shall come on swift wings to him who disturbs the peace of the King” was found near the doorway. Sure enough, four months and three days after the tomb was opened, the earl died of an infected mosquito bite.

Must be a coincidence, you say? Well, maybe. But when Tutankhamen’s mummy was unwrapped, a strange mark was found on his left cheek, exactly matching the spot of the mosquito bite on Lord Carnarvon’s cheek, which proved to be his death warrant.[9] 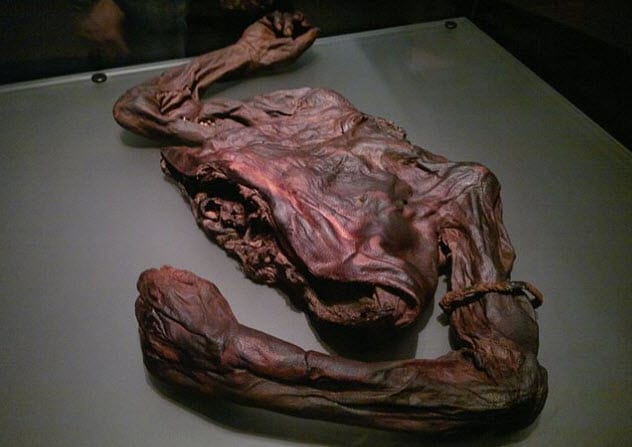 Human sacrifice was common in the ancient Celtic kingdoms of Ireland and was just as violent as anything dreamed up by the most depraved pharaoh or Roman emperor. The unidentified body of “Old Croghan Man” was found in County Offaly in 2003 and bears clear signs of a gruesome death.

According to forensic analysis, the unfortunate nobleman had holes cut in his upper arms through which ropes were passed to restrain him. Then he was stabbed, cut in half, and had his nipples cut off.

Why the nipples, you ask?

Well, in pre-Christian Ireland, prisoners and defeated enemies would suck on the nipples of the king as a gesture of submission. Cutting off Old Croghan Man’s nipples ensured that he could never again rule as king—in this life or the next.[10]

I am a recently graduated student of English Literature from SE London. Twitter: @Connolly