On a dark winter’s night, there’s nothing quite like a cozy English ghost story. Wait, did we say “cozy”? We meant terrifying. The home of The Hound of the Baskervilles and Charles Dickens’s creepy signalman is no stranger to blood-curdling terror . . . and that’s just the fiction. Step out onto the fog-shrouded moors or wander ’round London’s back alleys and you might just find yourself encountering a spectre beyond your freakiest nightmares.

10 The Screaming Skull Of Bettiscombe Manor 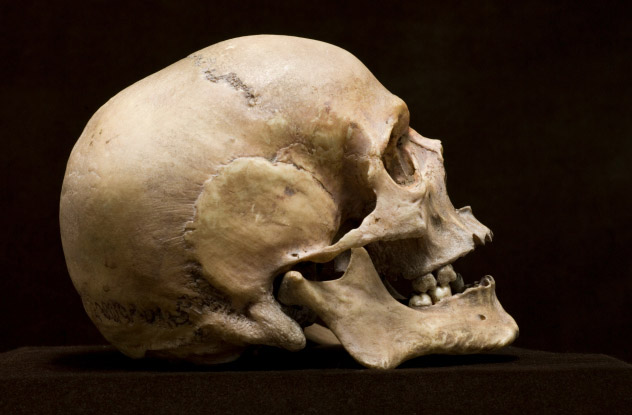 In the 19th century, John Frederick Pinney returned home to Bettiscombe Manor from a West Indies trip with a slave in tow. Upon arrival, the enslaved man promptly expired, with a warning that he wouldn’t rest properly until his body was returned home. Being your standard slave-owning jerk, Pinney refused the request.

According to the story, no sooner had the deceased man been buried than villagers began to hear screams coming from the nearby cemetery. They were the sort of screams a madman might make after witnessing something beyond human imagination. In a panic, Pinney is said to have exhumed the corpse and hid it in his attic. Then things really got bad.

As the body decayed, Pinney found himself in possession of a skull that brought hideous misfortune, but would scream with unholy fury if he tried to remove it from the house. In the end he had no choice but to keep it, and now it watches over his descendants, just daring them to throw it out. 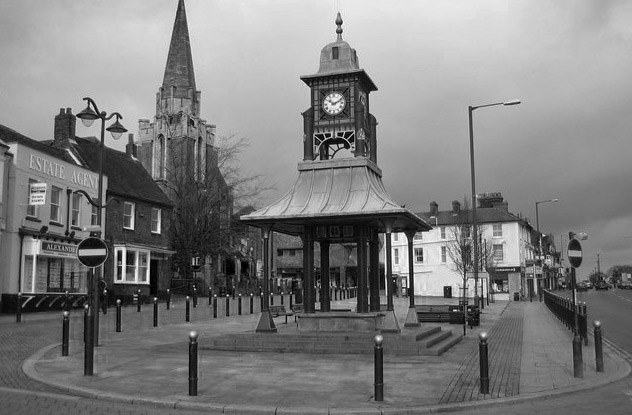 In October 1979, Roy Fulton left his local pub and accidentally wandered into a horror story. Driving home that night, he allegedly stopped to give a lift to a random hitchhiker, somewhere on the cold and lonely roads outside Dunstable.

The guy got into his car without a word and the two sped off into the night. After a few minutes of sitting in silence, Fulton awkwardly tried to make small talk. When that failed, he lit a cigarette and turned around to offer his passenger one. The guy was gone.

At no point had Fulton slowed down. At no point had the hitchhiker had any chance to leap from the vehicle. And yet there was no one there. Fulton’s story may match many other tales of ghostly hitchhikers, but it was so convincing that the national papers covered it. In the years since, the story has resurfaced across the UK in various forms, but never in such a simple and chilling way as the Dunstable tale.

The Beast of Dartmoor? (as seen on Fact or Faked)

Dartmoor is everything creepy you imagine about the English countryside. A gigantic wasteland of windswept rock, this fog-shrouded landscape is said to be home to all sorts of terrifying spirits. The most terrifying of which may well be the Yeth Hounds.

Great black, demon-eyed dogs that hunt in packs, the Yeth Hounds are meant to be the half-mad souls of unborn children, doomed to haunt the moors. Supposedly you can see them at night, hunting people foolish enough to venture outside after dark. A central part of the horror is the sound they’re said to make during these hunts—an inhuman scream that cuts through the air and drives those who hear it mad with fear. Their name is even thought to be a corruption of “yelling,” though we prefer the more accurate “screaming monster beasts.”

The legend goes that if the Yeth Hounds catch you, they’ll drag you off to “faraway lands.” We’re not sure exactly what that means, but we’re betting it’s nowhere nice.

Bodmin Prison is said to be haunted by a particularly malevolent ghost. As soon as you step from your tour group and enter the dank, cold dungeon, you feel a cold hand slowly grasp your shoulder. At which point you remember that you came down here alone . . .

Visitors to the now-defunct prison have reported a spectral female ghost wandering around outside. Staff have seen gaunt faces peering at them from inside old cells. Very young children reportedly start screaming with terror on one section of the old lower floor, and some claim to have witnessed a faint female figure trying to snatch them away.

The little village of Pluckley, in Kent, is said to be the most haunted place in Britain. And by “said,” we mean it’s got a genuine listing in the Guinness Book of World Records. Various nocturnal goings-on haunt this slice of nowhere, but perhaps none can compete with the Elvey Farm Whisper.

In the late 18th century, farmer Edward Brett is said to have committed suicide after a confrontation with his wife. His last words to her were: “I will do it.” And he did. Minutes later, in the dairy, he shot himself.

Visitors to Elvey say they still sometimes hear those words being whispered again and again around the farm. Like an undead record stuck on repeat, Brett’s “I will do it” has somehow lingered long after his mortal remains crumbled into dust—a grim warning from the distant past. 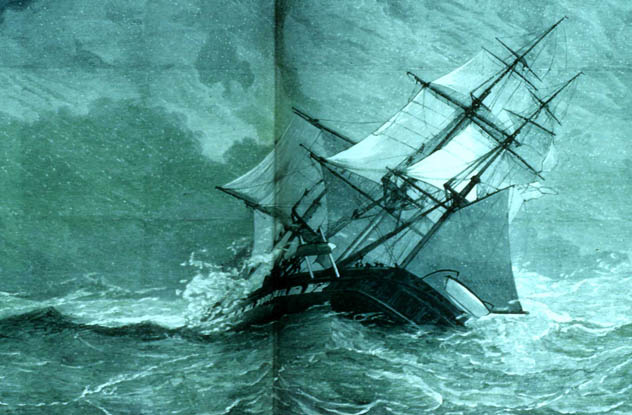 In 1878, the HMS Eurydice sank in a blizzard off the coast of the Isle of Wight, in England. Only two of 366 men survived. It was a terrible tragedy, and it set the stage for one of England’s most enduring hauntings.

The same afternoon, a dining guest of the Bishop of Ripon was said to have had a vision of the sinking boat. After that, a ghostly ship began appearing more and more frequently off the Isle of Wight. In the 1930s, a submarine supposedly had to take evasive action when the vessel appeared from nowhere, only to vanish again without a trace.

But the most impressive sighting so far comes courtesy of Prince Edward. In 1998, the royal was making a TV series on the island. As he and the crew watched, a schooner appeared out of nowhere. It approached the Eurydice’s watery grave and then vanished. The Prince claimed to see it clearly, but no ships were said to be in the area at the time. 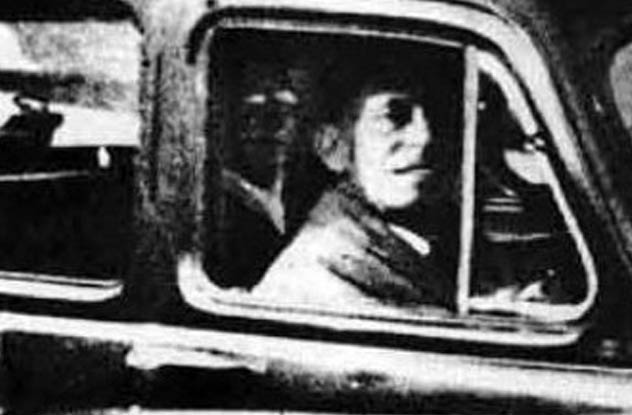 Unlike most of the entries on this list, the ghost of Mabel Chinnery’s mother has only ever been seen once. In 1959, Mabel and her husband were visiting her mother’s grave in Ipswich. As Mabel left some flowers, her husband waited in the car. For some reason that’s never quite been explained, Mabel finished the visit by turning round to take a photo of her husband. When she developed it, she realized she could see her dead mother sitting in the car’s rear seat.

Now, we’re not saying this isn’t a hoax. You could propose many explanations for the illusion of a face in the grainy photograph. But The London Sunday Pictorial newspaper hired an expert to examine the photo, and he declared it genuine. 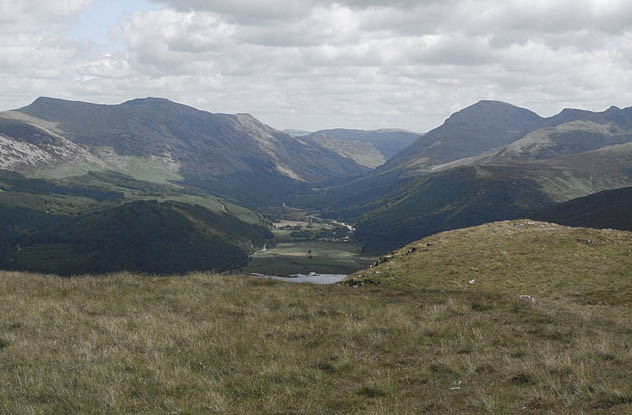 Unlike many of these sites, England’s Lake District seems an unlikely place for a haunting. The park contains bright valleys and wild ponies. It inspired William Wordsworth to write his most famous poem—about the park’s daffodils. But even this quaint corner of England hides at least one unspeakable horror.

At the old ferry station in Ferry Nab, people hear strange calls at night echoing across the water. Supposedly a lost soul waiting for a ferry that never came, the unseen spectre is said to have lured boatmen to their deaths many years ago.

Legend has it that those walking on the far shore as the sun sets sometimes find themselves followed by the figure. What it wants, no one knows. But you can be sure that anyone who waits to find out won’t be making it back to their hotel that night.

2 The Ghosts Of The Ancient Ram Inn

Remember how the hotel owners in The Shining built their holiday paradise over an ancient Indian burial ground, then acted surprised when it turned out haunted? Well, the owners of the Ancient Ram Inn in Gloucestershire went one step further. This hotel was built on a site allegedly once used for child sacrifice.

As a result, the hotel is said to be one of the most haunted in England. Strange glowing lights appear in the corridors. A ghostly presence creeps up and down the staircase. People even say they’ve encountered a succubus while staying the night. But none of this has anything on the Bishop’s Room.

A low-ceiling bedroom at the back of the inn, the room is said to infect anyone who steps inside with a sense of oppressive dread. Priests have been known to refuse to enter the room. Eight people who slept there have needed exorcisms, according to the current owner. 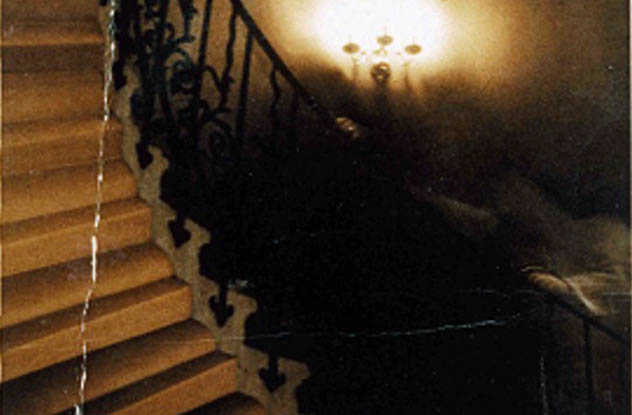 The Tulip Staircase is a spiral stairway in the 17th-century Queen’s House in Greenwich, London. On June 19, 1966, a Canadian couple photographed the staircase and managed to snap an image of a faint figure leaning on the rail. Convinced they’d caught a ghost on camera, the two sent the picture off to a London ghost club, who decided the only way to verify the encounter would be to hold a seance on the staircase.

On June 24 of the following year, the group gathered in the Queen’s House. One of the members was tasked with writing down everything that happened. His transcript alone makes spine-chilling reading:

At this point the handwriting suddenly becomes a shaky, indecipherable scrawl, before stopping dead.

In the years since this freaky seance, a couple of visitors and three staff members have also reported encountering the ghost. The museum’s website claims no one has yet debunked it.