What do you think of when you hear the word “dictator”? Secret police forces? Concentration camps? How about stupid sunglasses?

Yeah, it turns out there’s another side to oppressive tyrants: one less “terrifying” and more “hilariously pathetic.”

Alfredo Stroessner, Paraguay’s dictator-in-chief between 1954 and 1989, was South America’s longest-lived Cold War tyrant. During his tenure, Paraguay transformed into a safe haven for Nazi war criminals. His brutal security services would reportedly record victims’ dying screams and send the tape to grieving relatives.

Yet despite all this, Stroessner seemed terrified that people might one day forget his name. We know this because he plastered the thing absolutely everywhere.

Before 1989, the Paraguayan capital’s most distinctive feature was a vast neon sign that repeatedly flashed the word “Stroessner” all night, every night. Newsreaders were required to start broadcasts with his name. The city’s airport, hotels, parks, stations, schools, public buildings, and roads all had to feature “Stroessner” somewhere in their titles. He even named the country’s second city “Puerto Stroessner” in case ordinary Paraguayans hadn’t quite got the message yet.

After he was deposed, all references to his name vanished overnight. He’s now one of the least known Latin American despots in modern history.

Modern tyrants don’t like social media. Tools like Twitter and Instagram disseminate information to protestors, show police beating innocent people, and can ultimately cause revolutions. So when Tajikistan dictator Emomali Rahmon shut down YouTube in 2013, residents probably assumed it was for security reasons.

They were wrong. It was because someone had uploaded a video of Rahmon dancing badly.

Shot at the wedding of Rahmon’s son, the video is nothing more than your standard slice of awkward Dad karaoke, mixed with some painful middle-aged dance moves. But it embarrassed Rahmon so much that the entire country was banned from accessing YouTube, and a regional station that rebroadcast the footage was taken off the air. To this day, the video remains unmentionable in Tajik circles, presumably on pain of a very nasty death. 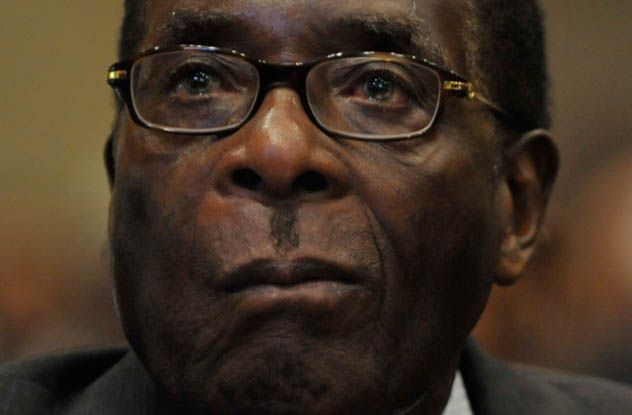 It’s no secret that dictators like to portray themselves as almost superhuman. We’ve all heard about Kim Jong-Il’s unmatched golf game and Chairman Mao’s dolphin-like swimming abilities. But some dictators have to win at utterly ridiculous things, too, even at things that require no skill or intelligence whatsoever. Things like the Zimbabwe state lottery.

In 2000, Zimbabwe’s partly state-owned Zimbabwe Banking Corporation announced that Robert Mugabe had unexpectedly won the lottery. In a press release distributed far and wide, the local propaganda department extolled the aging dictator’s brilliance at being randomly selected to win money. The record-breaking amount this wise ruler had managed to snag? $2,600.

Russia’s ex-KGB strongman Vladimir Putin is famous for his laughably homoerotic attempts to appear manly. His government frequently publishes photos showing Vlad hunting, fighting, hunting, discovering lost treasure, and then hunting some more. But when he decided to move into fishing, it sparked an international vanity contest of bizarre proportions.

In 2013, Putin claimed to have landed a 21-kilogram (46 lb) pike during a fishing trip. This touched a nerve with Alexander Lukashenko, the despotic ruler of neighboring Belarus, who immediately took time out from his busy torture schedule to land an even bigger catch.

In an official state broadcast, Lukashenko declared he’d caught a 57-kilogram (126 lb) catfish while fishing at the Pripyat River. Although no photos existed, the Deputy Prime Minster was wheeled out to allegedly gape at the size of Lukashenko’s slimy monster. Press releases were quickly hurried out.

In the end, the Internet made a mockery of both fishermen, and few of their citizens believed their claims. 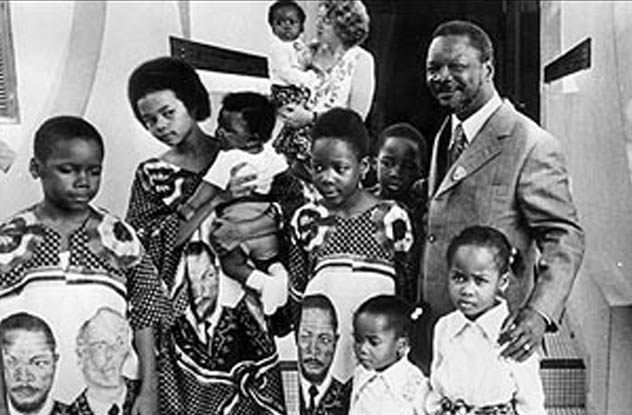 It would be hard to imagine a dictator crueler than Emperor Bokassa. Ruler of the Central African Republic from 1965 to 1979, he was famous for massacring groups of protestors and throwing courtiers who displeased him to his pet lions. He was also deeply, deeply insecure, to the extent that he once decreed that schoolchildren must wear expensive uniforms bearing a gigantic picture of his face.

Even for those used to living under a bloodthirsty lunatic, this was one step too far. School kids loudly protested the new design, and Bokassa responded by reportedly having them killed.

The French government ended up stepping in to remove Bokassa. Sadly for his citizens, things didn’t improve. As of March 2014, the CAR is in the grip of a double genocide.

5 The Ego Of “King” Ceausescu

You could fill a dozen articles with the insanity of Nicolae Ceausescu. Romania’s dictator until he found himself on the wrong end of a revolution in 1989, the perpetually drunk-looking despot filled his time with such shenanigans as blowing the state budget on pointless highways and declaring his absentminded wife a world-leading scientist. But even this doesn’t compare to his enormous vanity complex.

Not content with being the unopposed ruler of an entire country, Ceausescu transformed his Soviet office into a bizarre sort of monarchy. He built himself a fake scepter to carry around. He swiped treasures from Buckingham Palace during a state visit. And he ordered the construction of the biggest, stupidest palace the world has ever known. That’s right: The “enormous vanity complex” we alluded to earlier was both figurative and literal.

The Palace of the Parliament is 350,000 square meters (3.77 million sq ft). Other than the Pentagon, it’s the largest building in the world.

Its construction almost single-handedly annihilated the country’s financial reserves. For building such an offense to the eyes (and for genocide), Ceausescu and his wife were executed on live TV on Christmas Day, 1989, forever putting to an end his kingly ambitions. 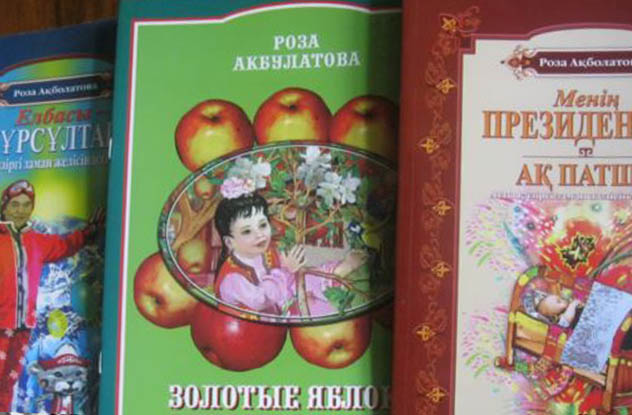 As a kid, did you ever think characters like Snow White felt so real they just had to exist? Well, kids in Kazakhstan get that all the time because their fairy tales feature real-life dictator Nursultan Nazarbayev as the dashing hero.

In 2011, Nazarbayev commissioned a book called Leader of the Nation Nursultan, an epic fairy tale collection about himself. According to the Associated Press, the book recreated “Nazarbayev’s achievements on the international diplomatic scene in the form of illustrated fables.”

The collection flew off the shelves. In fact, it did well enough to warrant five sequels, charting Nazarbayev’s life from his moment of birth during a magic thunderstorm to hosting an international sports summit in 2011. There are apparently more books on the way, with the author saying they’ll be more popular than Harry Potter.

Are you the sort of person who worries people will forget their birthday? Former Yugoslav strongman Josip Tito was. Only he had a better plan than simply hoping Facebook would remind his loved ones: He made everyone run.

Run, as in: run a race. Every May 25 from 1945 until his death, the whole of Yugoslavia transformed into a gigantic relay event. Starting in far flung remote regions and ending in Belgrade’s soccer stadium, the race saw Yugoslavia’s young people carry a ceremonial baton from town to town, where it received birthday wish after birthday wish before finally finding its way into Tito’s hands.

The entire operation took over a month and involved the whole country—or, rather, all seven countries, since Yugoslavia was really a federation of states. It was like watching the Olympic flame cross the whole of Europe, except it was all for a single despot’s birthday.

When Malawi gained independence in 1963, its citizens probably prepared themselves for a brand new life, free from the restraints of British colonialism. They hadn’t counted on the bizarre insecurities of their new dictator, Hastings Banda.

Unlike other post-colonial leaders, Banda utterly hated his own culture. Where most of Africa spurned the trappings of imperialism, he embraced it, creating a society more rigidly British than Britain itself.

One of his first acts was to construct an exact replica of Eton College and staff it purely with expat Brits. Then he went about firing (and often executing) every single black minister and business leader, replacing them with white men. He became an active supporter of apartheid in South Africa, despite having suffered under the system as a black laborer 20 years earlier. But his dreams didn’t stop at making Malawi the perfect image of a British colony. Banda wanted it to be a Victorian one, too.

His reign banned television, modern music, and miniskirts and promoted a rigid moral code. Men were forbidden from wearing long hair, and any sign of 1960s culture—such as bell bottoms—was made illegal. And just like a British governor of old, Banda treated his fellow countrymen with benign disdain, imagining them as ignorant peasants in need of his enlightened guidance. He finally died aged 99, hated by his own people and spurned by the Britain he loved so much.

1 Everything Gadhafi Ever Did 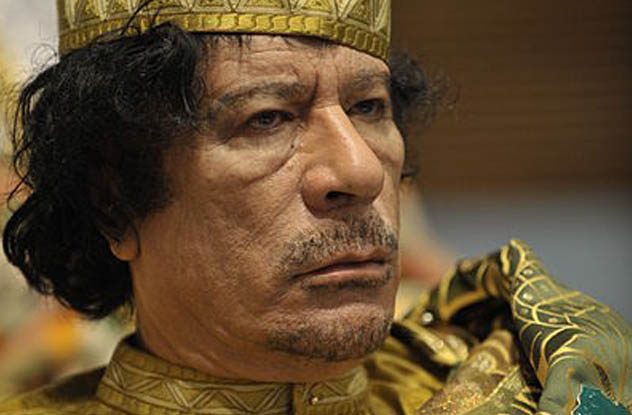 Even in the pantheon of insecure dictators, you occasionally come across one who makes all the others seem well-rounded. That someone is Muammar Gadhafi.

Even by dictator standards, the “Mad Dog” was painfully vain. He frequently had Botox injections to (try to)make his face less hideous. He paid Nelson Mandela’s praise singer to cut an album and make music videos extolling his own virtues. He even had himself declared “king of kings” of all of Africa in a bizarre 2008 ceremony.

He forbade sports stars from being identified by name in case they became more popular than him. He secretly wore a wig but still managed to look ridiculous. His fear of appearing ugly was so great he even underwent plastic surgery without anesthesia on multiple occasions.

The guy could well have been the vainest, most insecure man who ever lived, which was quite an achievement when you consider everyone else on this list.