The invention of photography has allowed mankind to document a lot of historic moments throughout our time on Earth. Some show us how far we have come as a species, while others make us remember the moments that we’d rather forget.

10The Last Public Execution By Guillotine
1939 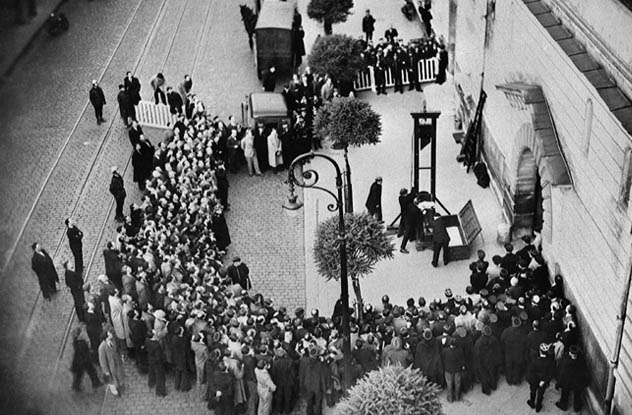 Public executions aren’t some ancient historical footnote. Many countries still regularly decapitated criminals publicly less than a century ago. Above, we can see the guillotine’s blade about to claim the head of Eugen Weidmann. Weidmann was a robber and a murderer before he eventually got caught and sentenced to death. On June 17, 1939, entire crowds turned up to see the gory spectacle.

Why would they turn up to witness such a macabre display? Back then, authorities used public executions to make examples of the condemned. Parents would drag their children along to see, saying something along the lines of, “See what happens to people who disobey!” People also came for the entertainment value. We go to the zoo or to sports games, while the French would go to see public beheadings for fun.

This picture ended up being so controversial that the government only allowed executions behind closed doors following its publication. The times had indeed changed—instead of viewing them as having a “moralizing effect,” public executions were viewed as uncivilized and barbaric. The guillotines were then operated out of the public eye until 1977, when the country abolished capital punishment. All the devices then found themselves stashed away in museums. 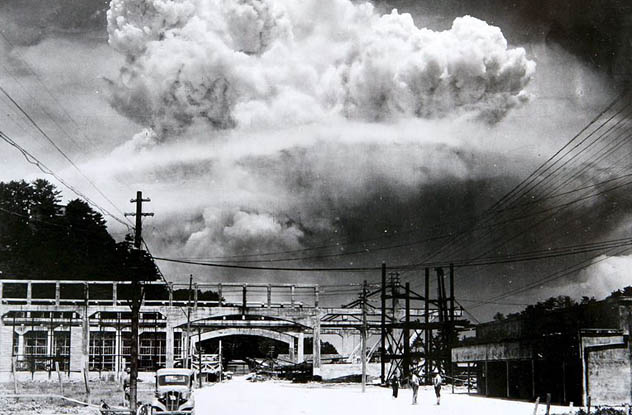 On August 9, 1945, America dropped the atomic bomb codenamed “Fat Man” over the Japanese city of Nagasaki, killing an estimated 40,000 people on impact. Thousands more would die later from burns and radiation sickness. The scene was hellish, as thousands lay dead or wounded underneath the debris. The city had been reduced to rubble.

Even on first glance, we see that this is a very powerful image. What’s really striking, though, is that this photo was taken 20 minutes after the explosion. The destruction is immense, still hanging in the air. What’s more, on the right side of the photograph, three people stand in awe of what just happened. We really can’t even imagine what had to be going through the heads of witnesses to such destruction. 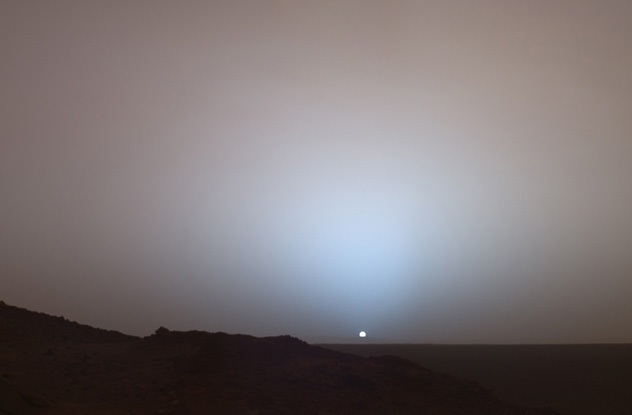 Taken out of context, you may not have even guessed that this image wasn’t taken on our own planet. This is in fact a Martian sunset, which looks very much like a sunset on Earth—a reminder that other worlds can appear to be strangely familiar.

This incredible image was taken by the Mars Rover Spirit, over the rim of Gusev Crater. Apart from taking pretty pictures, the rover was actually deployed to help study the Martian atmosphere, in addition to looking out for ice and dust clouds. The reddish color is due to fine particles suspended in the thin atmosphere, but the photo has a bluish tint due to the dust, which scatters light forward. Also worth noting is that the Sun appears to be smaller compared to what we see on Earth. This is because the Red Planet is farther than we are from the Sun. 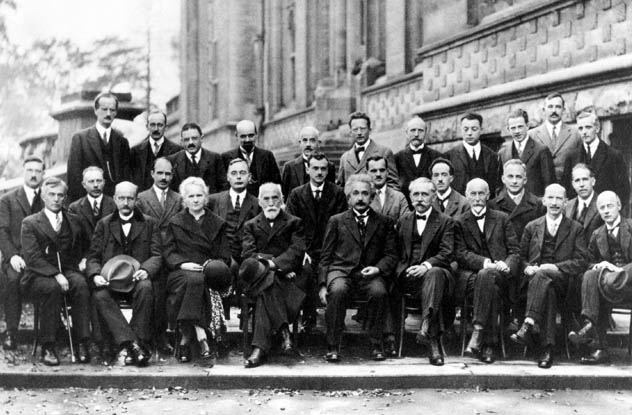 The most famous of all Solvay Conferences had the world’s best scientists discuss the newly discovered phenomenon of quantum physics. These scientists were contemporaries, but many are so individually famous that it’s astounding to see them all gathered in one place.

In the back row, sixth from the right, is Erwin Schrodinger, known for his developments in the field of quantum theory, from which he formulated the Schrodinger equation in wave mechanics. He is also famous for his popular paradox known as Schrodinger’s Cat, which he formulated in 1935. He shared the Nobel Prize with fellow scientist Paul Dirac.

In the middle row, first from the right, stands Niels Bohr. Bohr was part of the infamous Manhattan Project that resulted in the development of the atomic bomb. He was the first to show that energy levels in atoms were quantized, which meant that electrons could “jump” from one energy level to the next. His contributions to science have placed him as one of the founders of modern physics.

The third person from the left in the front row is Marie Curie. She coined the term “radioactivity” and was the first woman to win the Nobel Prize. She was also one of the very few people to win a prize in two disciplines, chemistry and physics.

Front row, fifth from the right—how could you miss him?—it’s Albert Einstein. He was pivotal in establishing the quantum theory, as he developed the general theory of relativity. He’s also known for coming up with arguably the world’s best known equation, E=mc2. Thanks to his immense contributions to modern physics, the word “Einstein” is nowadays synonymous with “genius.”

Other notable personalities include Werner Heisenberg (no, not Walter White), and Peter Debye, who has an uncanny resemblance to Hitler. To sum it up, this conference pretty much created the platform for all of modern-day physics to build upon. Having all of these incredible minds in the same picture is simply mind-blowing. 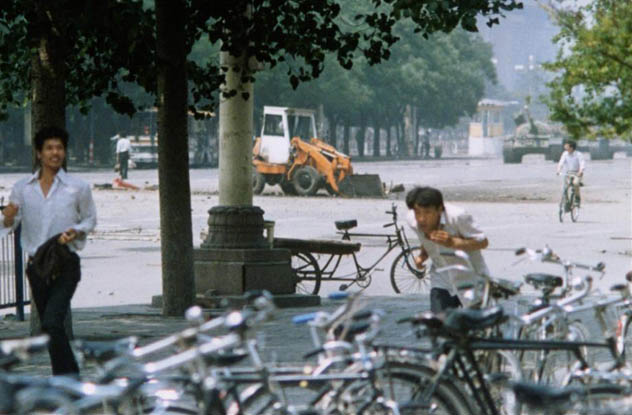 The Tiananmen Square protests of 1989 produced arguably one of the most iconic images of the 20th century. Although everyone has seen the original “Tank Man” picture, this version gives us a whole different perspective, which makes us realize something new. We can see that the famous unnamed protester is carrying groceries—he wasn’t some freedom fighter trying to prove a point. He was a regular guy just going about his day.

To the right side, we can also see the approaching tanks, which will eventually came to a halt. While all of this is taking place, civilians scramble for safety. But one man, not visibly different from the rest, chooses to stay put. It shows that you, I, or anyone (as ordinary as we think we may be) can do extraordinary feats if we really want to. 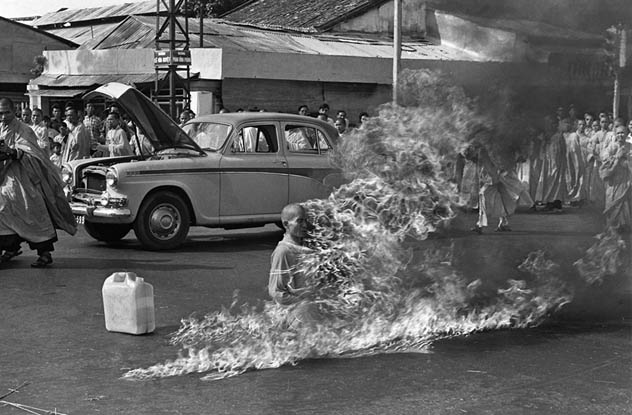 This shocking photograph depicts Quang Duc, a monk who set himself on fire at a busy Saigon road intersection in 1963. He died protesting the persecution of Buddhists by the South Vietnamese government. The regime had made life very difficult for Buddhists, banning them from flying their traditional flag or practicing their beliefs and spiritual exercises. Thus the Buddhists decided that a message had to be sent.

Quang Duc emerged from a car just outside of the Cambodian Embassy, accompanied by two other monks. He calmly sat down in a traditional meditative position while another monk soaked him in gasoline from head to toe. Quang Duc didn’t even flinch as the other monk struck a match and set him ablaze. Passersby were mostly stunned, but some did manage to stop and pray as the monk burned alive.

His protest didn’t go unnoticed. The image made headlines all over the globe within hours. In the words of President John F. Kennedy: “No news picture in history has generated so much emotion around the world as that one.” 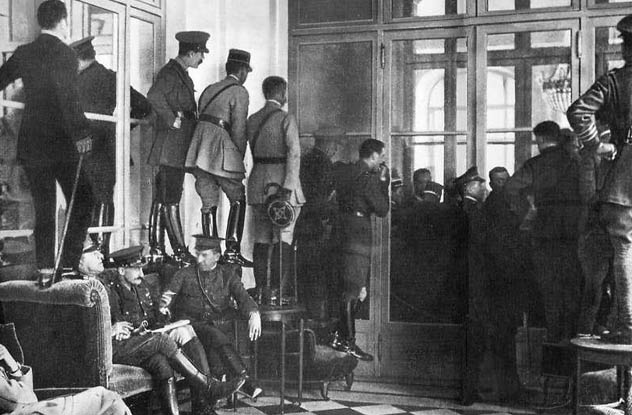 The Treaty of Versailles was one of the peace treaties that ended World War I, and though peace treaties in general are all well and good, this particular one was a train wreck. Bitterness and revenge, rather than logic, defined the terms. It put full responsibility of the war on Germany, making the country pay insanely high reparations (which it wouldn’t finish paying off until 2010). This ruined Germany’s economy, made the nation all too eager to regain strength at any price, and ultimately set the stage for World War II. So much for keeping the peace.

The treaty’s flaws make it all the more amazing to see how eagerly people initially received it—particularly to see top military officials precariously perched on furniture to witness the historic signing. 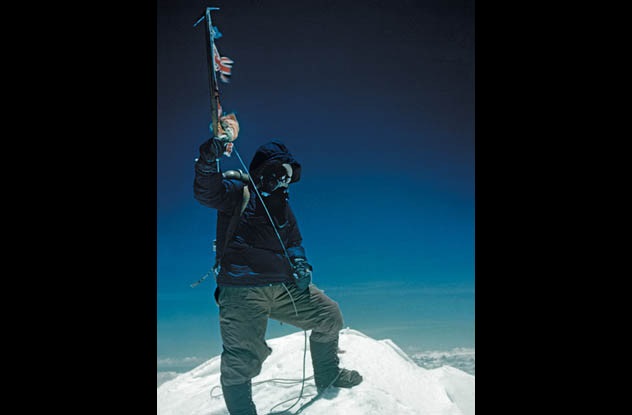 We humans are always looking for the next thing to conquer, be it armies, entire empires, or even Mother Nature herself. This desire to learn more, try harder, and constantly outdo ourselves has resulted in incredible feats and accomplishments. The tale of the first people to ever climb the highest peak on the planet is no different—it was the result of sheer determination and willpower.

Shown above is Tenzing Norgay. On May 29, 1953, he and his New Zealander companion Edmund Hillary became the first individuals known to reach the summit of Everest. They had managed to conquer the world’s highest mountain a mere three days before Queen Elizabeth II’s coronation, and the news didn’t reach the world until the morning of the coronation itself.

The duo spent only about a quarter of an hour on the summit. Hillary then took the famous photo of Tenzing posing with his ice axe, but when Tenzing asked to return the favor, the New Zealander refused. They took some additional photographs as proof, and with that, the duo slowly began the dangerous descent back to civilization. 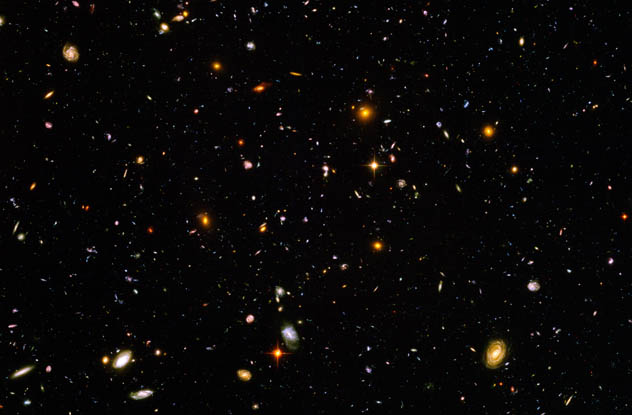 In 2003, the Hubble telescope pointed its lens at a small empty spot in the sky, creating the Hubble Ultra Deep Field image and giving us our farthest look into deep space. Before scientists pointed the Hubble at that patch of space, they honestly expected very little to be found out there. After they developed the slides, they realized that not only were they wrong, but they ended up finding an incredible amount of previously undiscovered phenomena. The knowledge gathered from this picture made it possible to observe the faintest galaxies in the universe, which would keep scientists busy for years. These galaxies were so distant and far away from us that we didn’t even know that they had existed before.

This photo may have even helped humanity to see itself as one, beyond national boundaries, races, and ethnicities. It really does make us realize how small and fragile we truly are. Others view this image as the complete opposite. Here’s the universe, in all its grandeur, wonder, and unimaginable scope, and amid all of its vast reach sit simple humans.

As Douglas Adams put it, “Space is big. You just won’t believe how vastly, hugely, mind-bogglingly big it is. I mean, you may think it’s a long way down the road to the chemist’s, but that’s just peanuts to space.” 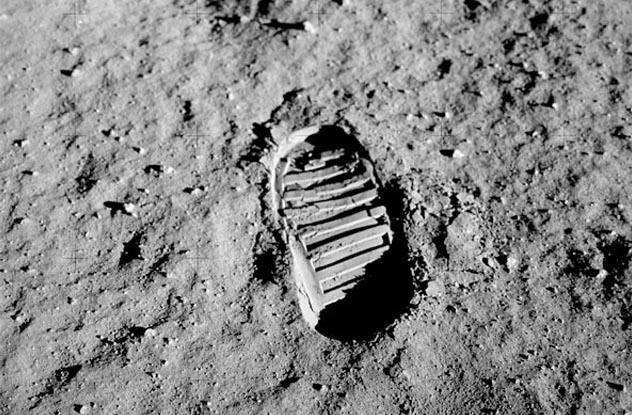 On July 20, 1969, mankind left its footprint for the first time on a body that was not the Earth. Astronaut Neil Armstrong made history—he was the first man to ever set foot on the lunar surface, a feat which would have been laughed at a mere decades prior. The historical event was broadcast to a worldwide television audience, with Armstrong muttering the famous words, “That’s one small step for [a] man, one giant leap for mankind.”

Armstrong and fellow astronaut Buzz Aldrin spent the next couple of hours collecting samples, while the third member of the team, Michael Collins, remained in the command module. Apollo 11 then came back safely to Earth on July 24, 1969. The success of the mission meant that the US had won the Space Race and had fulfilled the promise of JFK, who in 1961 stated that the US would put a man on the moon by the decade’s end.

There’s no wind on the Moon, so no matter what happens to humans on this planet, this footprint will be up there for millions of years.

I’ve been a long time reader of Listverse, and now I’ve decided to take the plunge and start writing my own lists. You can send your comments and suggestions to my email.