History will always fascinate modern generations. It hooks the imagination to read about the heroes and heroines of days gone by, horrific wars, tragedies of great ships that sank and unexpected large-scale disasters. A great many historical novels have been written about infamous events that changed the course of history and of course, even back then, photographs have been taken to document certain moments or people in time. On this list are just some of the most fascinating photographs taken throughout the last 200 years, some of which may be lesser known than others.

10 The first photo of the Sphinx of Giza 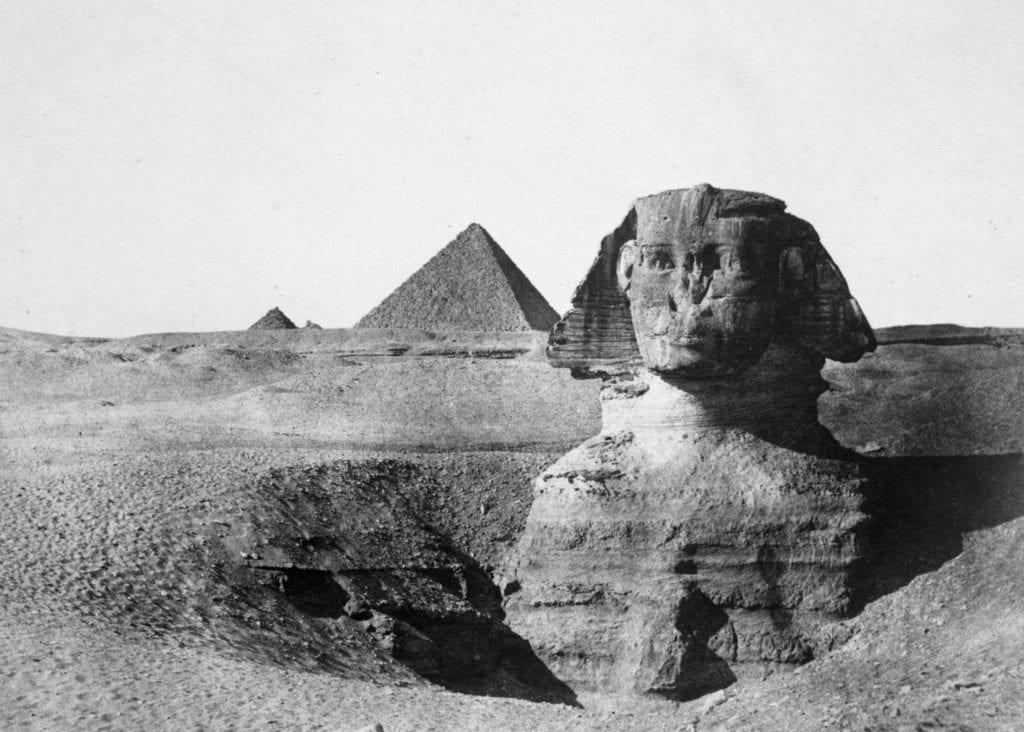 The Great Sphinx of Giza was built more than 4,500 years ago, literally thousands of years before photography was invented in 1826. Since then, hordes of photos of the Great Sphinx and the Pyramids of Giza have been taken by people who came from all the corners of the world to see these majestic monuments for themselves.

As part of what is believed to be the first set of photographs taken of the statue, Maxime du Camp snapped a photo of the Great Sphinx, with the pyramids visible in the background, in 1849. At that point the chest area of the Sphinx had only very recently been uncovered.

Another photograph taken in 1860 revealed that further excavation had uncovered even more of the statue. Today, the entire Sphinx is visible, including its tail that wraps around the rear and stretches to its right rear paw. Only the nose, believed to have been a meter wide, is missing from the statue.[1]

9 The splendour of a mausoleum 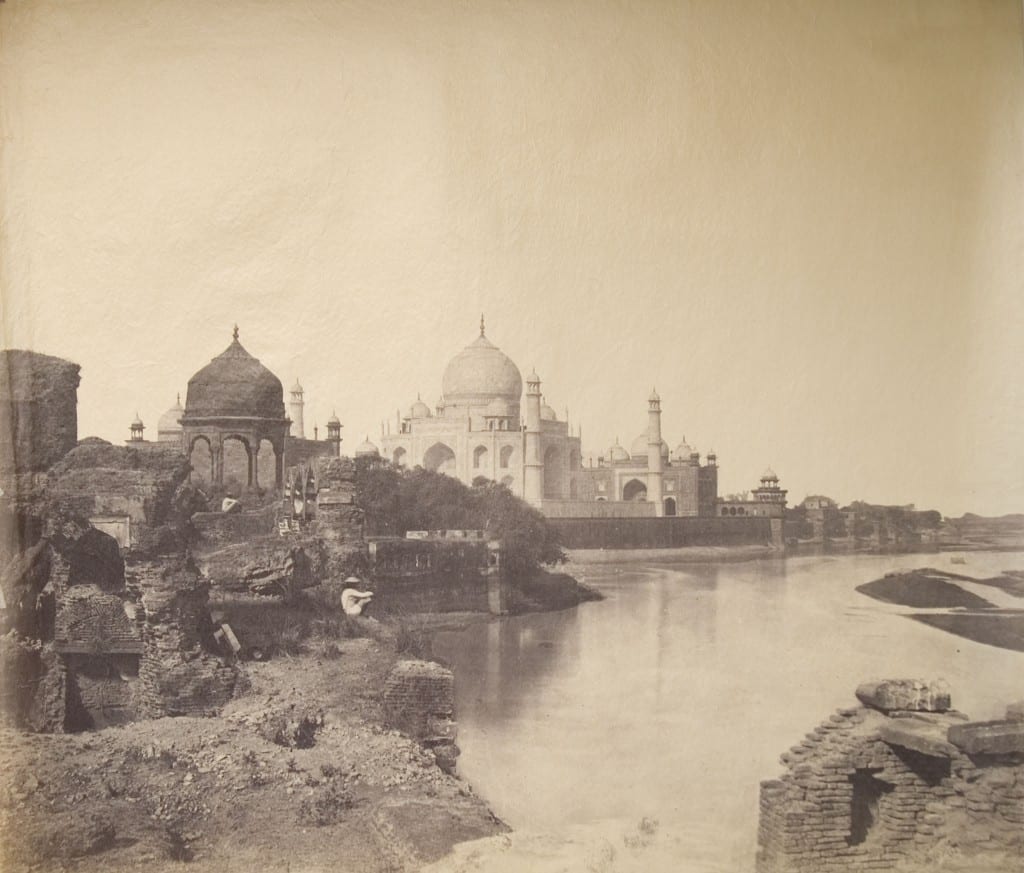 The spectacular Taj Mahal mausoleum was commissioned by the Mughal emperor Shah Jahan in 1632 to hold the tomb of his wife, Mumtaz Mahal. After Jahan died, his remains too were interred in a tomb inside the mausoleum. This tale took a turn for the gruesome when a myth started making the rounds that said Shah Jahan severed the hands and gouged out the eyes of all the craftsmen and artisans who worked on the Taj Mahal to ensure they couldn’t replicate its beauty anywhere else in the world.

The first-ever photos of the monument were taken by Dr John Murray between 1858 and 1862. The first photograph of the Taj Mahal depicts a side view of the building with the river Yamuna flowing in front of it.[2] 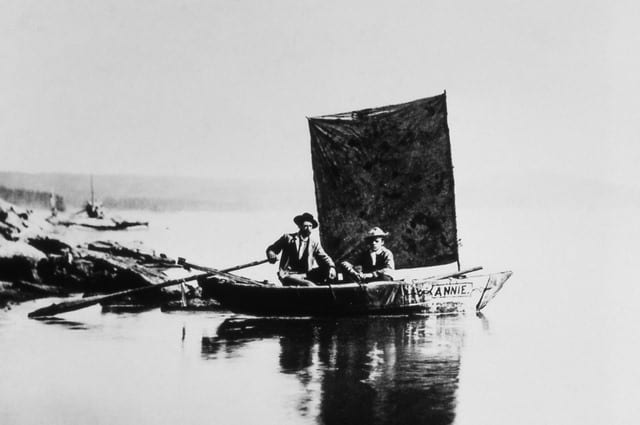 The Yellowstone National Park is home to Yellowstone Lake, the largest body of water in the park. Pre-historic times saw Native Americans populate the woods and valleys surrounding the lake, with the first European traveller to find the lake, John Colter, doing so during the 19th century. A fishing bridge was added in 1902, but closed for fishing in 1973 after the rapid decline of cutthroat trout.

In 1871, the first documented boat sailed out on the waters of Yellowstone lake. The Annie was sailed to Stevenson Island on 29 July 1871 and was a small canvas boat measuring 12 feet long. The boat contained passengers: James Stevenson and Henry W. Elliot.[3] 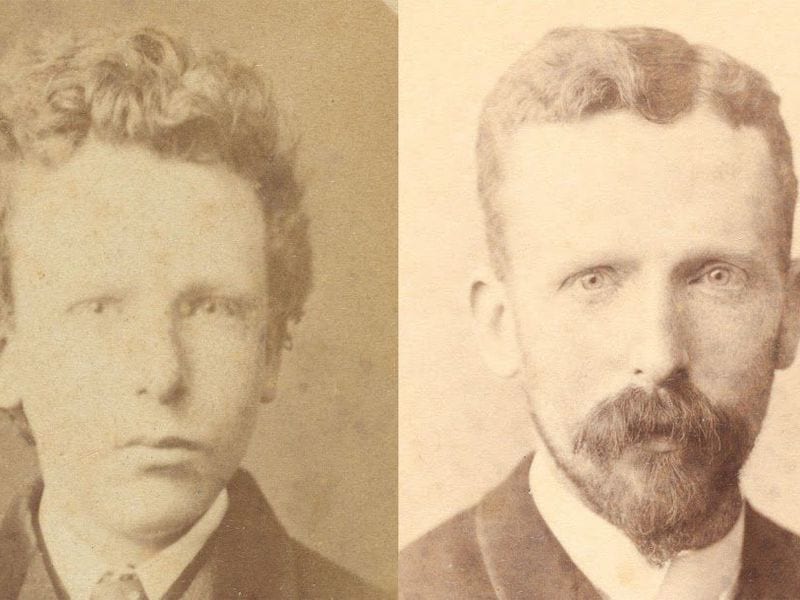 Vincent van Gogh is as famous for his beautiful paintings as he is for cutting off his own ear. The Starry Night, The Yellow House and Cypresses are among his most popular artworks. Van Gogh also created a number of self-portraits, but only had two photographs taken of himself throughout his lifetime.

One of the photographs was presented at an exhibition in 1957, during which Belgian researcher Mark Edo Tralbaut claimed that it depicted a 13-year-old Van Gogh. In 2014, however, a Dutch TV program used imaging technology to age-morph the Van Gogh photo and compared it to the other photo of the artist, taken when he was 19. It was found that the photos didn’t match. The Van Gogh Museum took up the matter and concluded that the 19-year-old was undoubtedly Van Gogh, but couldn’t conclusively prove that the photo of the 13-year-old was indeed the artist. Many experts now believe that instead of the photo depicting a teenaged Van Gogh, it in fact depicted his brother, Theo Van Gogh.[4] 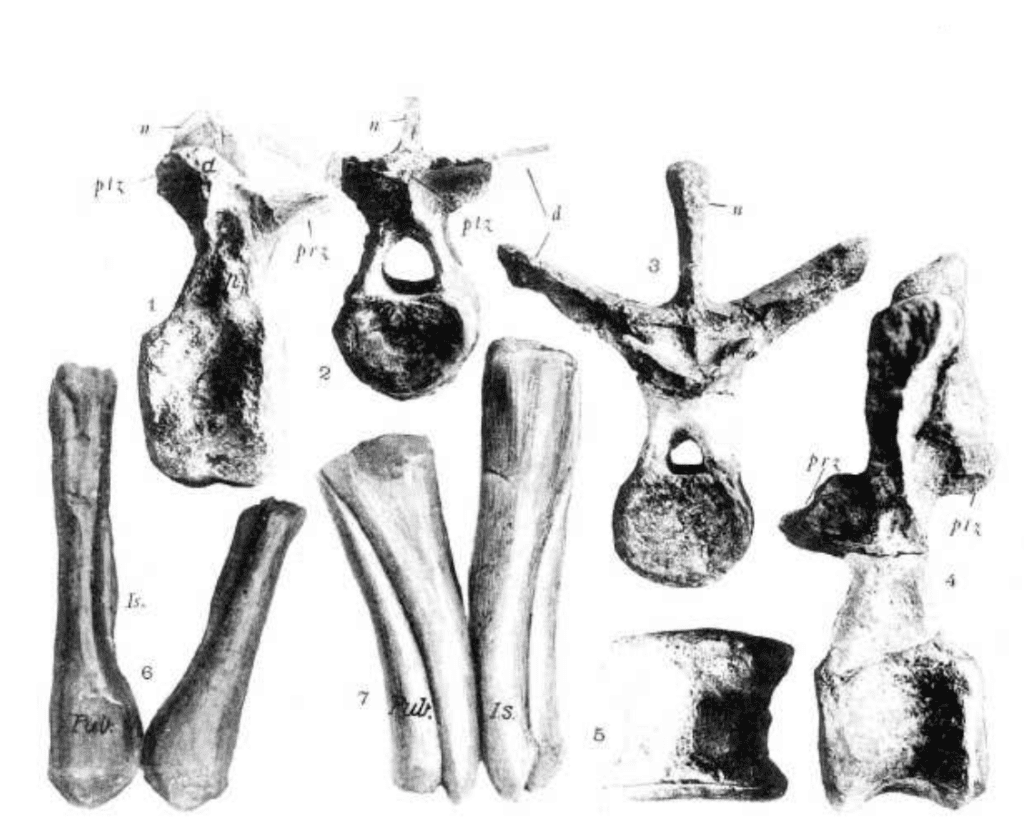 Dinosaur fossils have fascinated the world’s population for a long time. Books have been written about these giant creatures and movies produced that show them in all their former glory.

In 1898, an excavation in a geological formation in Europe, Argiles d’Octeville, uncovered several bones belonging to a Stegosaur. Amateur geologist, palaeontologist and archaeologist, Emile Savalle, took several photos of the excavation process and it became the oldest surviving photographs of a dinosaur excavation in Europe.

Savalle had found a solid block of Kimmeridgian limestone on the beach. The block contained fossilized bones and, after he notified the Natural History Museum in Le Havre, it was confirmed that the bones belonged to a dinosaur. Savalle died in 1902 and at that time, the skeleton had not yet been identified as being that of a Stegosaur, with it still being described incorrectly as an Iguanodon in 1904. It was only in 1911 that the Octeville bones were first correctly described as belonging to a Stegosaur.[5] 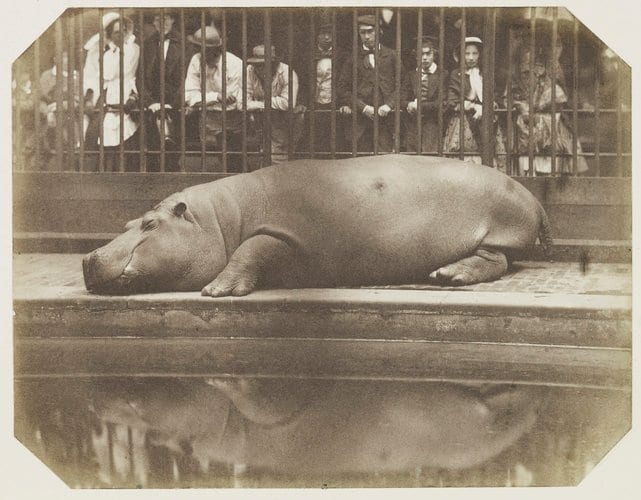 A cute baby hippopotamus was captured on an island in the White Nile and donated to England in return for deerhounds and greyhounds in 1850. Obaysch, named after the island he was found on, arrived in London to the cheers of many excited spectators. His new home, the Zoological Gardens, saw the number of visitors double overnight. Obaysch looked like he was smiling whenever he took a nap, and he was one of the first ‘star’ animals and the first hippo to arrive in Victorian Britain.

Obaysch escaped the zoo at one point and legend has it that a zoo keeper was roped in as ‘bait’ to help lure the hippo back into his enclosure. A second hippo was sent to the zoo in 1854, named Adhela. Obaysch and Adhela produced offspring 16 years later, but tragedy struck when their first two calves died soon after birth. A third calf named Guy Fawkes was born in 1872 and survived.[6] 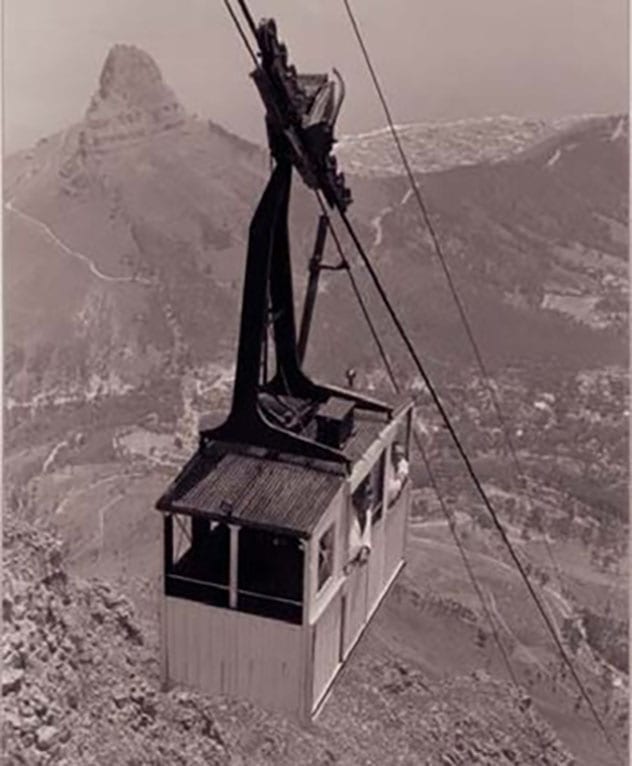 Table Mountain in Cape Town, SA has filled visitors with awe and wonder for hundreds of years. In 1790, Lady Anne Barnard became the first Capetonian woman to scale the summit at a time when it could only be done on foot. In 1912, plans for a cableway up the mountain started to take shape. On 4 October 1929 the cableway was officially opened. Since then, over 20 million people have taken a cable car to the top, including Arnold Schwarzenegger and Oprah Winfrey as well as Sir Edmund Hillary and George Lowe.

The very first cable car that made the route up the mountain looked like a wooden box with windows and looking at it today, it doesn’t inspire much confidence in its ability to transport a group of people up the massive Table Mountain.

However, during its long history, the cableway has maintained a 100% safety record with no accidents occurring since its inception.[7]

3 Into the Jaws of Death 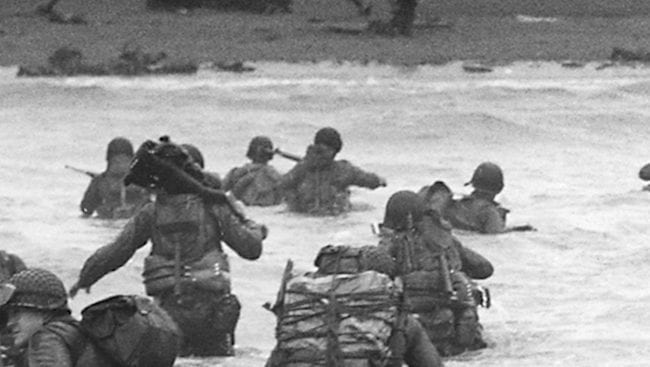 There are a great many photographs that have captured the horror and tragedy of war. Some of these photos depict the bloody aftermath of battles, while others show the psychological effects that the different wars have imprinted on soldiers and their families. Many photographs have been taken during action and reflect not only the terrible conditions the soldiers had to live in, but the terrifying actions they had no choice but to undertake.

On 6 June 1944, Robert F. Sargent took a photograph of American soldiers disembarking from a LCVP at Omaha Beach during WWII. The photo was named “Taxis to Hell – and Back – Into the Jaws of Death” and the original caption read: “American invaders spring from the ramp of a Coast Guard-manned landing barge to wade those last perilous yards to the beach of Normandy. Enemy fire will cut some of them down. Their ‘taxi’ will pull itself off the sands and dash back to Coast Guard-manned transport for more passengers.”

This photograph garnered the reputation of being one of the most famous photos of D-Day. Almost 10 000 soldiers were killed during D-Day. They were buried in the Normandy American Cemetery which is located on a cliff overlooking Omaha Beach. More than 1500 soldiers’ bodies were never recovered.[8]

2 Balancing on top of the world 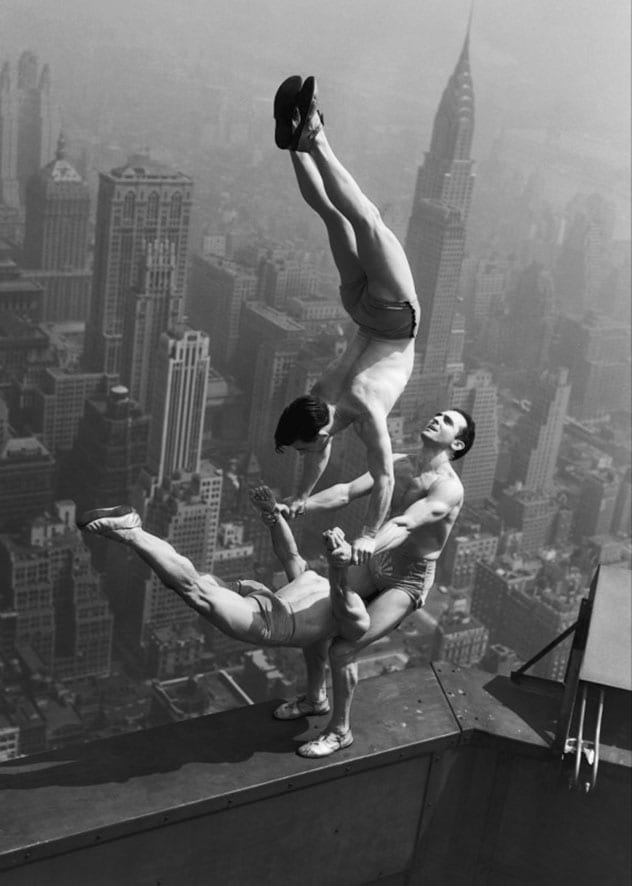 If you have a fear of heights, you might not enjoy looking at this photograph.

Acrobats Jarley Smith, Jewell Waddek and Jimmy Kerrigan performed a fearless routine on top of a ledge on the 86th floor of the Empire State Building on 21 August 1934. Nicknamed the ‘Three Jacksons’ the young men showed off an intricate balancing act which culminated in them resembling a human sculpture.[9] 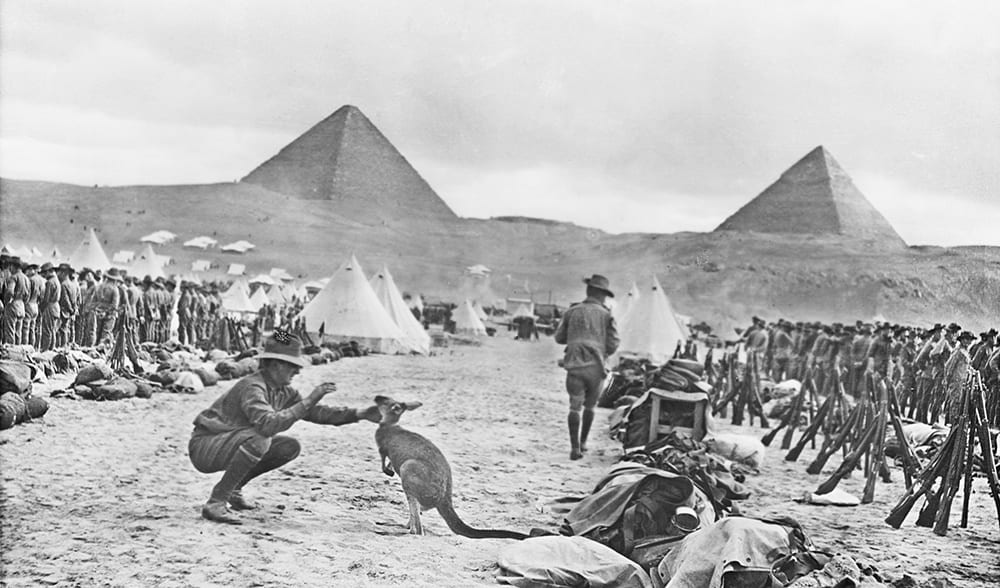 This is truly a unique photo. Not only are the Pyramids of Giza visible behind lines of soldiers, one of the soldiers is hunched in front of a kangaroo of all things.

Kangaroos and other animals were smuggled all over the world during the First and Second World Wars by Australian troops who were proud to be serving Australia. This is how the kangaroo in this photograph made it all the way to Egypt. Some soldiers even smuggled koalas and possums. Many Egyptians were aghast at the sight of the marsupials in their country and deathly afraid of them, until they were informed that kangaroos were harmless unless provoked.[10]