Space is pretty cool, and a lot of it is pretty weird. Planets orbit around stars, which die and are reborn, and everything in the galaxy orbits supermassive black holes that slowly pull everything to their doom. But every now and again, space throws a curveball our way so bizarre that you’ll twist your mind into a pretzel trying to figure it out. 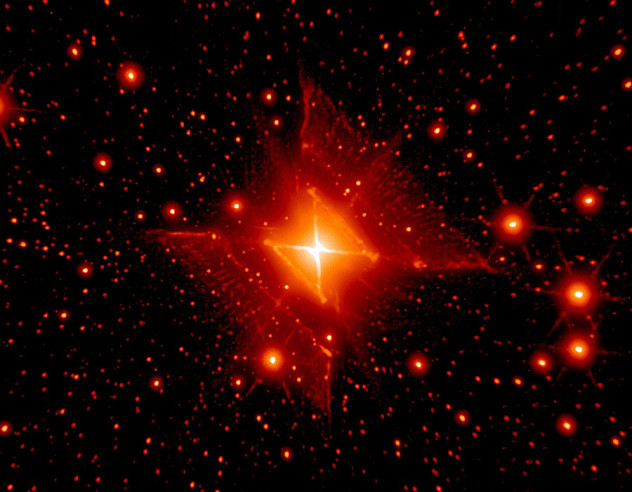 Things in space are fairly rounded, for the most part. Planets, stars, galaxies, and the shape of orbits are all at least somewhat circular. Then there’s the Red Square Nebula, a cloud of gas shaped like, well, a square. Understandably, this made astronomers do a bit of a double take, because things in space aren’t supposed to be square.

But it’s not really a square, either. If you look closely at the image, you can see that the cross shape really forms the sides of two cones with their tips touching, but there aren’t exactly tons of cones in the night sky, either. The hourglass-shaped nebula is so brightly lit because there’s a star at the very center—that is, where the tips are touching. It’s quite possible that this star could eventually detonate into a supernova, making the rings at the base of the cones glow with blinding intensity.

9The Pillars Of Creation 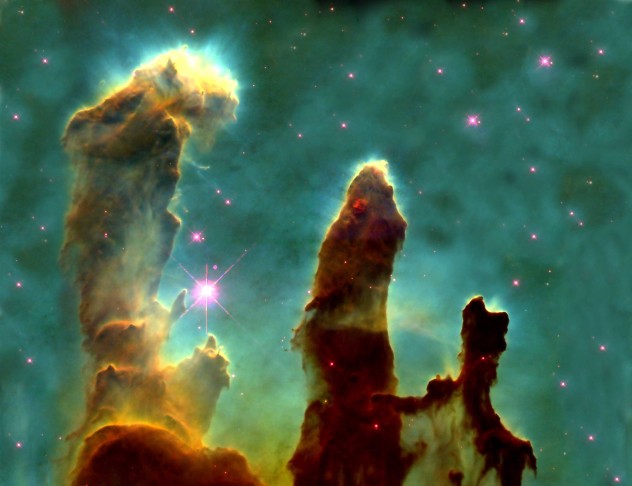 As Douglas Adams once wrote, “Space is big. Really big. You just won’t believe how vastly hugely mind-bogglingly big it is.” We all know that the unit of measurement used for distances in space is the light year, but think about what that means. A light year is a distance so enormous that it takes light—that thing that moves faster than anything else in the universe—an entire year to traverse it.

The implications of this glimpse into the past can be pretty weird. For example, astronomers think that the Pillars of Creation formation was actually destroyed by a supernova about 6,000 years ago. Since it takes light so long to reach us, you can still see the pillars if you look up into the night sky, even though they no longer exist. 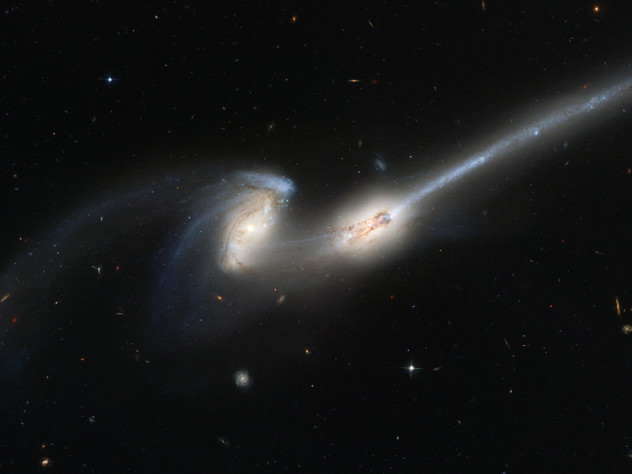 Things are constantly moving around in space—orbiting, spinning, and hurtling through the void. Because of this—and the enormous gravitational pull between them—galaxies tend to collide with one another on a regular basis. That’s probably not too surprising—all it takes is one look at the moon to realize that space tends to grab things and slam them together. When two galaxies containing billions of stars collide, it’s got to be complete turmoil, right?

Actually, in galactic collisions, the probability of two stars colliding is practically zero. How can that even happen? Apart from being really big, space’s other defining feature is that it’s pretty empty. It’s called space for a reason, after all. While galaxies might look solid from a distance, remember that we’re in a galaxy right now, and the nearest star is 4.2 light years away. That’s a lot of space. 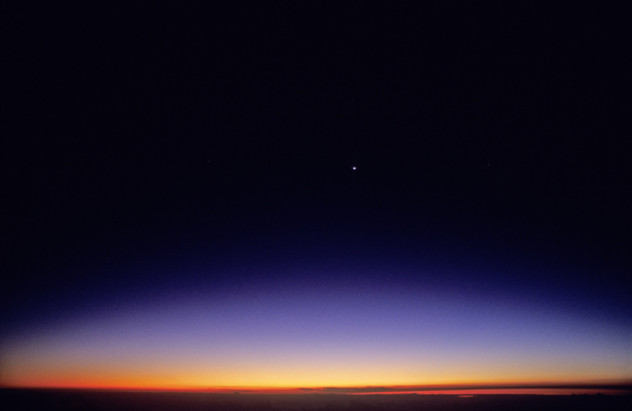 This seems impossible because nothing can travel faster than light, and even light hasn’t had enough time to travel between those two points. So how has the background temperature had time to stabilize to anything close to uniform, let alone exactly the same?

This is explained by the theory of inflation, which suggests that the universe was stretched out across massive distances just an instant after the big bang. According to this theory, more universe wasn’t created as the edges expanded outward, but already existing space-time was stretched out like taffy in a fraction of a second. In that infinitesimally short time, a distance as small as a nanometer would have been stretched out to several light years. This doesn’t contradict the law that nothing can travel faster than the speed of light, because nothing traveled. It just inflated.

In the simplest possible terms, imagine the initial universe as one pixel on your computer’s image-editing program. Now imagine scaling the dimensions of the image by a factor of 10 billion. Since the entire dot is still all of the same stuff, its properties—such as temperature—are uniform.

6How A Black Hole Kills You Black holes are so massive that stuff gets really weird in their general vicinity. It’s easy to imagine that getting sucked into one would mean spending the rest of eternity (or your air supply) screaming in lonely torment into a funnel of blackness. But never fear—the immense gravity of a black hole solves that problem for you.

The force of gravity is stronger the closer you get to the source, and when there’s such an enormous force to begin with, the amount can change greatly over a short distance—say, the height of a human being. Assuming you fell in feet-first, the force of gravity on your feet as you approached the black hole would eventually be so much stronger than the force on your head that it would stretch your body out into a spaghetti-like line of atoms before it ultimately crushed you at the center. You might want to keep that in mind before you get any ideas about springboarding into the nearest black hole.

5Brain Cells And The Universe

Is the Universe a Giant Brain?

Recently, physicists created a simulation of how the universe began, which played through the big bang and subsequent events that led to the universe that we see today. It’s a bright yellow cluster of tightly packed galaxies at the center and a “web” of less dense galaxies, stars, dark matter, and everything else.

At the same time, a student at Brandeis University was researching how neurons in the brain are connected, and he looked at thin slices of a mouse’s brain through a microscope. The image he produced consisted of a yellow neuron surrounded by a red “web” of connections. Sound familiar?

The two images, although vastly different in scale (nanometers versus light years), look strikingly similar. Is this just a case of patterns recurring in nature, or is the universe going to go all Men in Black on us and turn out to be a brain cell inside of an enormous other universe? 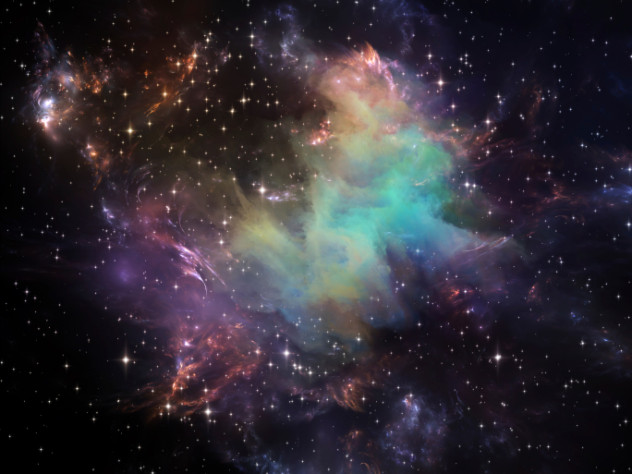 According to the big bang theory, the amount of matter in the universe will eventually create enough of a gravitational pull to slow the universe’s expansion to a halt. However, baryonic matter (things we can see, like stars, planets, galaxies, and nebulas) only accounts for somewhere between 1–10 percent of the matter necessary for this to happen. Theorists have balanced the equation by hypothesizing that “dark matter” (matter we cannot observe) must comprise the remaining percentage.

Every theory that attempts to explain the missing baryons comes up empty, though. The most common theory is that the missing matter is composed of the intergalactic medium (the disperse gasses and atoms floating in the void between galaxies), but when we count those, we still come up way short of the necessary matter. This could be explained by a large portion of the gases in the intergalactic medium being ionized, meaning they wouldn’t absorb light, but no theory has been able to account for enough ionization. For now, we have no idea where a large portion of the matter that’s supposed to be out there actually is. 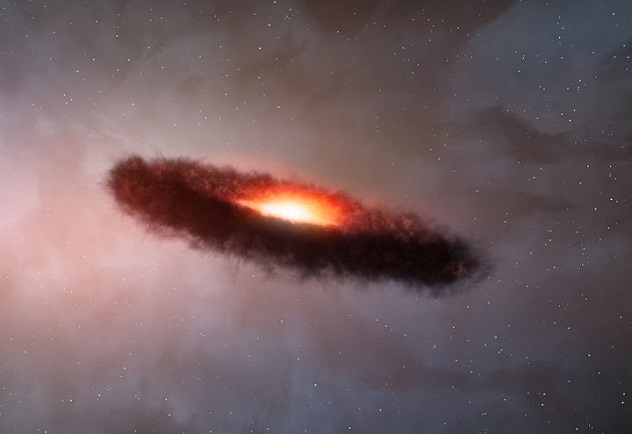 On a list of things that stars are, “hot” easily ranks in the top 10. When visiting a star, getting burned to a crisp would be much more of a concern than freezing to death—in most cases. Brown dwarfs are one type of star that are quite cool by star standards. Astronomers recently discovered a type of star called Y dwarfs, which are the coldest type of star in the brown dwarf family. Y dwarfs are colder than the human body. At only 27 degrees Celsius (80 °F), you could reach out and touch one, if not for the immense gravity that would crush you into a fine paste.

These stars are insanely difficult to detect because they emit almost none of their own visible light, so we have to search for them in the infrared spectrum. There’s even some talk that brown dwarfs and Y dwarfs might be the undetected “dark matter” that is missing from the universe. 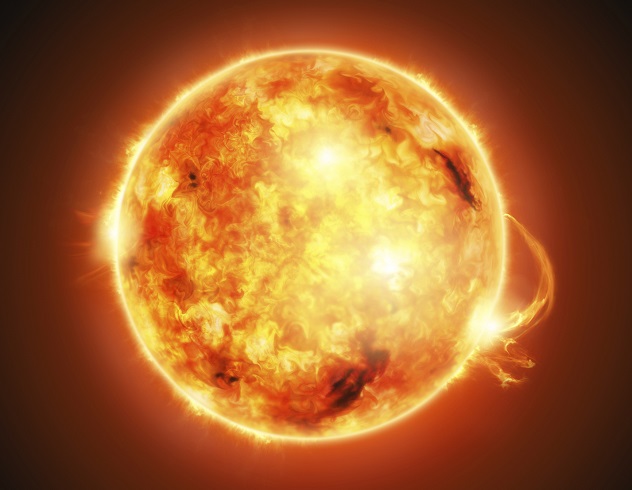 The farther away an object is from a heat source, the cooler it is. That’s why it’s so curious that the surface of the Sun is about 2,760 degree Celsius (5,000 °F) and its corona (sort of like its atmosphere) is over 200 times that hot in some places.

Even though there are some processes that stars undergo that could explain a temperature difference, none of them explain such an enormous gap in temperature. While we aren’t totally sure why this happens, scientists think it has something to do with small patches of magnetic field that keep appearing, disappearing, and shifting position on the surface of the Sun. Since magnetic lines can’t cross each other, the patches get rearranged every time they come close, a process that keeps heating the corona.

While that may seem like a neat and tidy explanation, it’s not nearly so pretty. Experts can’t even seem to agree on how long these patches tend to last, let alone the process by which they heat the corona. Even if that turns out to be the answer, no one knows what causes these seemingly random patches of magnetism to pop up. The Hubble Deep Space Field is an image we obtained by pointing the Hubble telescope at “empty” space, and it contains thousands of distant galaxies. Whenever we look at an “empty” space in the Eridanus constellation, though, we see nothing. At all. It’s just a black void spanning a width of over a billion light years. Almost any other patch of “emptiness” in the night sky will return an image of galaxies with about the same dispersal, but this immense void is bizarre. We have several methods for detecting what we expect to be dark matter, but even those have come up empty when we peer into the Eridanus void.

One controversial theory is that the void contains a supermassive black hole that all of the nearby galactic clusters orbit around, and that this high-speed orbit accounts for the “illusion” of an expanding universe. A counter-theory suggests that all matter eventually clumps together, forming galactic clusters, and this drift forms voids between those clusters over time.

But that doesn’t explain the second void astronomers found in the southern night sky, and this one is 3.5 billion light years wide. This is so wide that it’s difficult for the big bang theory to explain, as the universe hasn’t been around long enough for such an enormous void to form through standard galactic drift. Maybe there’s something to this enormous black hole thing after all.

Kier is a writer at Listverse and Cracked.com. When he isn’t doing these things, he’s constantly worrying about the supermassive black hole at the center of our galaxy that will eventually devour everything we love.