One of the most fascinating things about the universe is how little we really know. And just like we want to know what happens when we die, science has asked how the universe will end for as long as man has been able to think about such concepts. The truly fascinating thing is just how many theories the scientific community has produced—and how wildly different some of them are.

What Will The Big Crunch Do To Earth?

The most prominent theory for how the universe began is the Big Bang, where all matter first existed as a singularity, an infinitely dense point in the abyss of nothing. Then something caused it to explode. The matter expanded outward at an incredible rate and eventually formed the universe we see today.

The Big Crunch, as you might have guessed, is the Big Bang’s opposite. All that matter expanding outward at the edges of the universe is being affected by our universe’s gravity. According to this theory, gravity will eventually cause this expansion to slow to the point where it halts and begins to contract instead. The contraction will bring all of that material (planets, stars, galaxies, black holes—everything) back to the center until it becomes that infinitely dense singularity again, wiping out everything. And then we’d be left with the same conditions that the universe had before the Big Bang—all the matter of the universe condensed into an infinitesimal point.

This is, however, unlikely to happen based on current knowledge, since we’ve recently discovered that the universe appears to be expanding at an accelerating rate.

9The Inevitable Heat Death Of The Universe 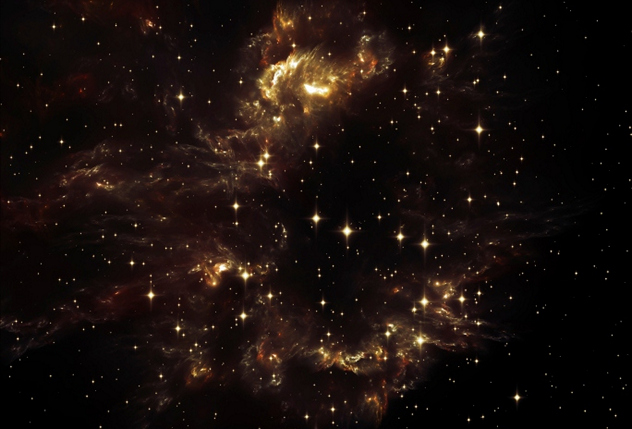 Think of heat death as the total opposite of the Big Crunch. In this case, gravity is not strong enough to overcome the expansion, so the universe just keeps on expanding exponentially. Galaxies drift apart like forlorn lovers, and the all-encompassing night between them becomes wider and wider.

The universe follows the same rules as any thermodynamic system, and they all end up the same way: with heat evenly distributed throughout. If we extrapolate that to our universe, we wind up with all of the matter evenly dispersed throughout—in a cold, dark, boring mist. Eventually, the stars will all wink out, one by one, and there won’t be enough energy left to ignite new ones. Finally, the entire universe will go dark. Matter will still be there, but in particle form, and its motion will be totally random. The universe will be in a state of equilibrium, and these particles will bounce off of one another without exchanging energy. We’ll be left with just particles in a void. 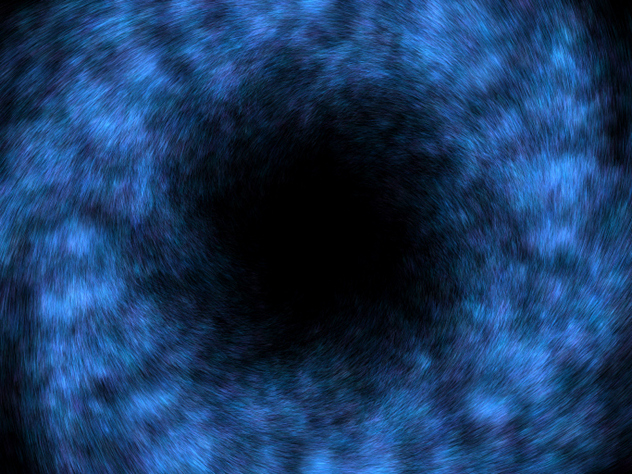 According to a popular theory, most matter in the universe is orbiting black holes. Just look at galaxies, which contain almost everything and house supermassive black holes in their centers. A large part of black hole theory involves the cannibalization of stars or even entire galaxies as they fall into the hole’s event horizon.

In a finite universe, these black holes would eventually devour most of the matter, and we would be left with a dark universe. Every now and then there would be a flash of light, almost like lightning, whenever an object was pulled close enough to a black hole to emit energy, and then it would fall dark again. Eventually, we’d be left with nothing but gravity wells in an abyss. More massive black holes would consume the less massive ones, becoming larger, even more massive black holes. But still, this wouldn’t be the final state of the universe. Over time, black holes evaporate (lose their mass) because they emit what is called “Hawking radiation.” So after the last black hole dies, we’ll be left with an even distribution of subatomic Hawking radiation particles.

7The End Of Time 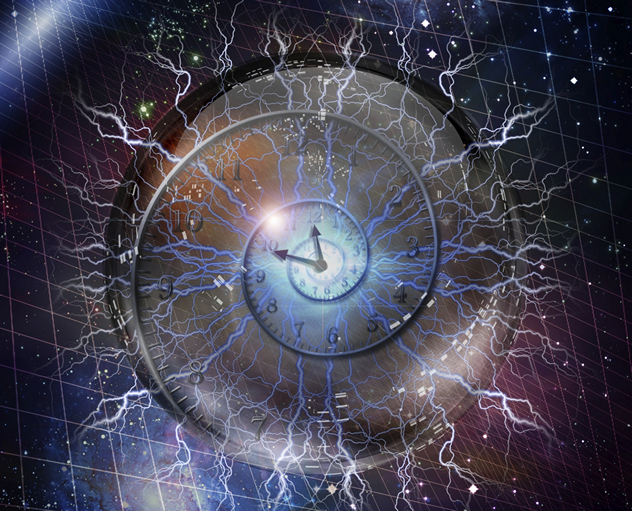 If anything is eternal, it’s surely time. Whether there is a universe or not, time has to chug on. Otherwise, there’d be no way to discern one moment from the next. But what if time lost momentum and just froze? What if there were no more moments? Just the same instant in time. Forever.

Assume we live in a universe that never ends. With an infinite amount of time, anything that could possibly happen has a 100 percent probability of happening. The same paradox happens if you have eternal life. You live an infinite time, so anything that is possible is guaranteed to happen (and happen an infinite number of times). Thus, if you live forever, the odds of you becoming permanently incapacitated in some way reach 100 percent, and you spend eternity cartwheeling through the blackness of space. Because this messed up a lot of calculations that try to predict outcomes in our universe (like the figures behind dark energy), scientists theorized something else: that time itself must eventually stop.

Assuming you were still alive to experience this (in billions of years, long after the Earth is gone), you’d never realize anything was amiss. Time would just grind to a halt and, according to scientists, “Then everything will be frozen, like a snapshot of one instant, forever.” But it wouldn’t really be forever, since time wouldn’t be moving forward at all. It would just be that one instant in time. You’d never die. You’d never grow old. It would be a kind of pseudo immortality. But you’d never know. 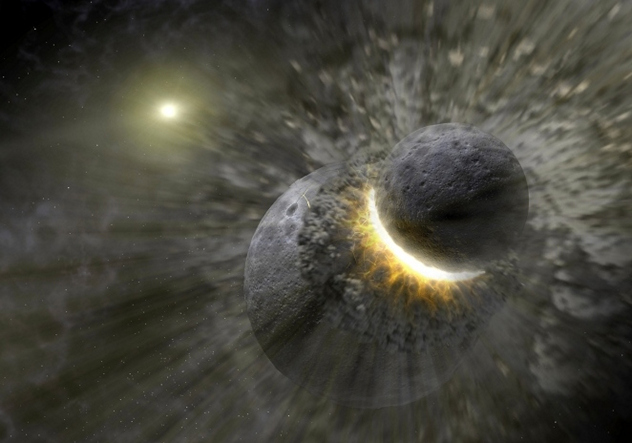 The Big Bounce is similar to the Big Crunch but far more optimistic. Imagine the same scenario: Gravity slows the expansion of the universe and condenses everything back into one single point. In this theory, the force of that rapid compression is enough to start off another big bang, and the universe starts again. In this model, things aren’t really destroyed, just “recycled.”

Physics doesn’t like this explanation, so some scientists have claimed that perhaps the universe doesn’t go the whole way back to a singularity. Instead, it gets very close and is then repelled by a force similar to the one that repels a ball when you bounce it off the floor. This “Big Bounce” would be very similar to a Big Bang, and would, in theory, produce a new universe. In this oscillating universe theory, our universe could be the first universe in a series, or it could be the 400th universe. There would be no way to tell.

No matter how the world ends, scientists feel the need to use the (horribly understated) word “big” to describe it. In this theory, an unseen force called “dark energy” is causing the accelerating expansion of the universe that we’ve observed. Eventually, the acceleration speeds up so much that, like the Enterprise at warp factor nine, it can’t take any more and rips itself apart into nothingness.

The scariest part of this theory is that, while most of these scenarios take place long after the stars have burned out and nothing is left anyway, the Big Rip is scheduled to happen (at the earliest estimate) in another 16 billion years. At this phase in the universe’s existence, planets (and theoretically life) will still exist. And this universe-wide cataclysm could burn them alive, tear them apart, or feed them to the space lions that live between universes. It’s anyone’s guess. But it’s sure to be a far more violent death than the slow heat death most people were expecting. 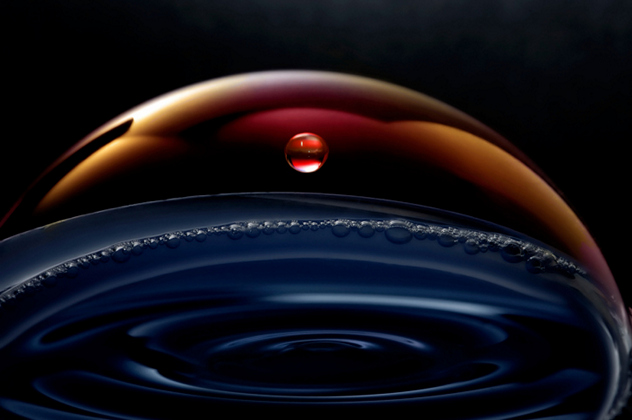 This theory hinges on the idea that the universe exists in a fundamentally unstable state. If you look at the values of quantum physics particles, some suggest that our universe is teetering on the edge of stability. Some scientists theorize that billions of years from now, the universe will tip over the brink. When this happens, at some point in the universe, a bubble will appear. Think of it as an alternate universe (though it’s really the same universe with different properties). This bubble will expand in all directions at the speed of light and wipe out everything it touches. Eventually, this bubble will destroy everything in the universe.

But don’t worry: The universe will still be there. The laws of physics will be different, and there might even be life. But the universe wouldn’t be anything that we could comprehend. Scientists think it would probably be a lot more boring though, and even postulated that for life to exist, the universe might have to exist on that edge. 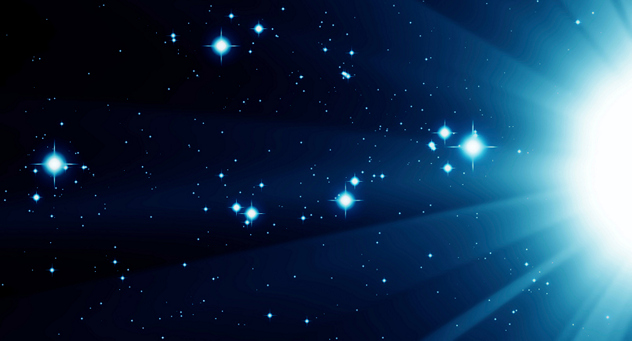 If we try to calculate probabilities in a multiverse (where there are infinite universes, each just a little different), we run into the same problem as the infinite-time universe: Everything has a 100 percent chance of occurring. To get around this problem, scientists take a section of the universe and just calculate probabilities for it. This makes the calculations work out, but the boundaries that they draw invariably cut off sections of universes at the outer edges of the sample, the same way that you might cut off parts of Texas if you drew a circle on a map of the USA.

Because the laws of physics don’t make sense in an infinite multiverse, the only way this model makes sense is if that boundary is a real, physical boundary that nothing can expand beyond. And according to the physics, sometime in the next 3.7 billion years, we’ll cross that time barrier, and the universe will end for us.

Now, it’s very likely that we just don’t have the understanding of physics to accurately describe this phenomenon yet, but it’s certainly a scary prospect.

2It Won’t (Because We Live In A Multiverse)

In a multiverse scenario, with infinite universes, these universes may spring in or out of existence. They could start in Big Bangs. Ours could end in a Big Crunch, a heat death, a Big Rip, or even a Big Foot (and the shout of “we told you so” from cryptozoologists would echo into eternity). But it doesn’t matter: In a multiverse, our universe is just one of many. And though it could blow apart and shoot rainbows into the void between universes for all we care, the larger “universe” will still be there. A universe is anything and everything in existence. And because there’s still matter out there, we’d still have a universe and existence. 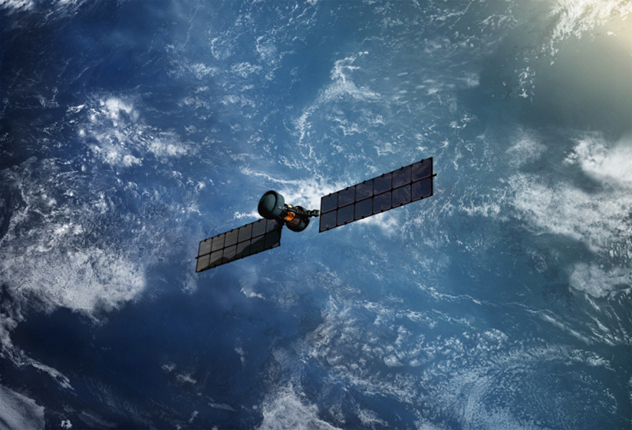 Ah, the age-old notion that the universe always has been—and always will be. This is one of the first concepts that humans created about the nature of the universe, but there is a new spin on this theory that sounds a bit more, well, serious.

Instead of the singularity of the Big Bang being the start of time itself, time could’ve existed before (for an eternity before), and the singularity and resulting bang could have resulted from the collision of two branes (sheet-like structures of space that form on a higher plane of existence). In this model, the universe is cyclical and will continue to expand and contract forever.

We could potentially know for sure in the next 20 years—we have a satellite (the Planck satellite) surveying space for the patterns in background radiation that the prominent theories on the origin of the universe predict. It’s a long process, but once we have that radiation pattern, we could have a better understanding of how our universe began—and how it will end.

Kier is a writer at Listverse and Cracked.com, and when he’s not doing that stuff, he’s curled up in the fetal position and worrying about the inevitable heat death of the universe.