Every single day, a mind-boggling amount of data filters through our observatories from the universe at large. Every piece is useful to science, even though much of it seems unremarkable to the public. But some discoveries are so rare or unexpected that even cosmophobes probably crack a little smile. 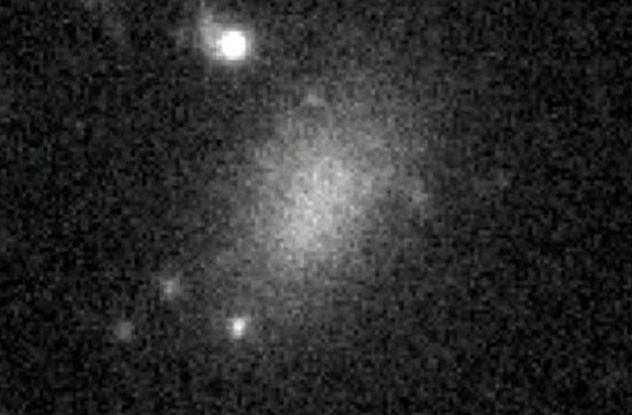 Galaxies come in many forms, and now we’ve discovered a new type: fluffy and wispy with incredibly few stars. At 60,000 light-years wide, some of these approach the size of our own Milky Way, yet hold only 1 percent as many stars.

In a collaboration between Maunakea’s giant Keck telescope and the much smaller but more awesomely named Dragonfly Telephoto Array, astronomers have discovered 47 ultra-diffuse, tissue-dense galaxies (UDGs). They’re so devoid of stars that any observers gazing at the cosmos would enjoy a boring, mostly empty night sky.

These cosmic outliers are so strange that astronomers aren’t sure how they formed. It’s possible the UDGs are failed galaxies that sputtered out of gas, or even bits that were pulled off of larger galaxies. Even more puzzling is their survival: They were found in the Coma cluster; a cosmic mosh pit buzzing with gobs of dark matter and galaxies zipping about at great speeds. Given the circumstances, it’s entirely possible that they were warped into their current configurations by the gravitational craziness going on around them.

Comets are tiny and tricky to spot, but the Hubble Space Telescope was recently lucky enough to witness a rare event—a seemingly spontaneous comet disintegration.

Comets are more fragile than they appear and are easily shattered by cosmic collisions or by straying too close to massive bodies. But asteroid P/2013 R3 came apart rather unexpectedly as it was gradually pulled apart by the slow, cumulative effects of sunlight.

Catching a few rays may not seem deadly, but as the Sun shone upon asteroid R3, it caused it to spin. R3’s rotational intensity gradually increased until it whirled itself into about 10 large, 200,000-ton chunks.

The chunks are leisurely floating away from each other and leaving a stream of particles in their wake at a totally underwhelming rate of 1.5 kilometers (1 mi) per hour. In cosmic terms, this is equivalent to an injured snail making its way through military-grade molasses.

Some lucky future earthlings may even witness the aftermath, as pieces that don’t get sucked into the Sun could eventually cross our path as meteors.

8A Star Being Born

Astronomers have been watching a burgeoning star, tongue-twistingly named W75N(B)-VLA2, as it matures into a huge, adult stellar body.

Located only 4,200 light-years away, VLA2 was first spotted in 1996 by the National Science Foundation’s Very Large Array (VLA), a (very large) radio observatory in San Augustin, New Mexico. During their first viewing, astronomers observed a dense cloud of gas emanating from the restless baby star.

Then in 2014, astronomers once again trained the VLA’s radioelectric eyes on W75N(B)-VLA2 to watch the formative star stumble awkwardly through its teenage years. They found that even after an astronomically infinitesimal period, the stellar toddler already looked radically different.

Reassuringly, it’s evolved in accordance with scientifically predicted models. Over the past 18 years, the surrounding gaseous mass has been stretched out by interactions with a vast torus of dust and debris that has encircled the star in its nascency. 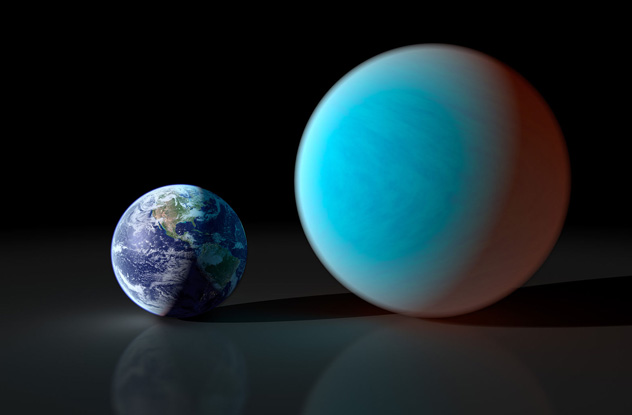 The celestial body 55 Cancri E gained fame as “the diamond planet,” but astronomers have recently discovered an even more unusual quirk—the planet can spontaneously change its temperature by as much as 300 percent. That’s an unprecedented feat for a rocky exoplanet.

The finicky 55 E is the innermost planet in its family of five and lives quite tumultuously. It’s so tightly squeezed in that it completes its orbit in a speedy 18 hours. It’s also tidally locked, with one face permanently turned toward its star. And since temperatures can range from 1,000–2,700 degrees Celsius (1,800–4,800 °F), astronomers now say the planet may be covered in oozing volcanoes.

That would explain its odd thermal behavior but sadly eliminated the possibility of a giant diamond, because it appears we’ve overestimated its carbon content. The volcano hypothesis is supported by evidence in our own solar system: Jovian satellite Io is similarly close to its parent, and tidal forces ripping at the moon’s body have turned it into a giant volcano.

6Kepler 7b Is The Weirdest Planet 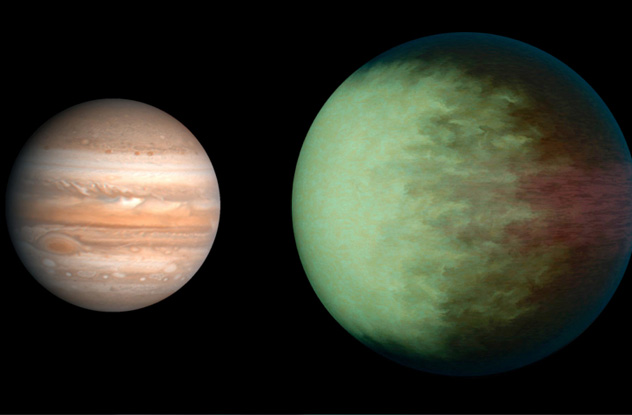 Gas giant Kepler 7b is the gift that keeps on giving. First, astronomers marveled at the planet’s incredibly puffy body. It’s 1.5 times the size of Jupiter but far less massive, which means it’s about as dense as Styrofoam. As a matter of fact, it would easily float on any ocean that could accommodate such a gargantuan planet.

Other than its claim to fame as a gassy wisp, astronomers in 2013 managed to map its cloud cover—the first time such a feat has been accomplished outside the solar system. Through infrared imaging, astronomers measured the planet’s temperature at 800–1,000 degrees Celsius (1,500–1,800 °F). That’s pretty hot but much cooler than expected—7b lies closer to its star than Mercury does to the Sun. After three years of observation, it was clear why: High-altitude cloud cover reflects loads of heat away from the planet.

Even more amazing? One side of the planet is awash in clouds while the other side enjoys clear weather, resulting in what looks like a magnificent planetary comb-over.

We enjoy eclipses relatively frequently, so we don’t realize just how unlikely they are. Solar eclipses are an amazing cosmic coincidence—the solar diameter is 400 times that of the Moon, and the Sun currently sits 400 times farther away. And Earth just happened to stumble into the perfect spot to enjoy this rare phenomenon. We’re alive at the right time to observe it, because the cosmic bowling balls we rely on for this supernatural show are constantly inching into new positions in the night sky.

Solar and lunar eclipses are awesome, but a triple Jovian eclipse beats both. In January 2015, humanity’s stalwart observer Hubble caught a trio of Galilean satellites—Io, Europa, and Callisto—lined up in front of their gas giant daddy.

Any observer standing on Jupiter’s incorporeal surface at the time would have witnessed a very psychedelic triple solar eclipse, a show we won’t see again until 2032. Luckily, the perfect harmony in the moons’ paths makes this a recurring event. 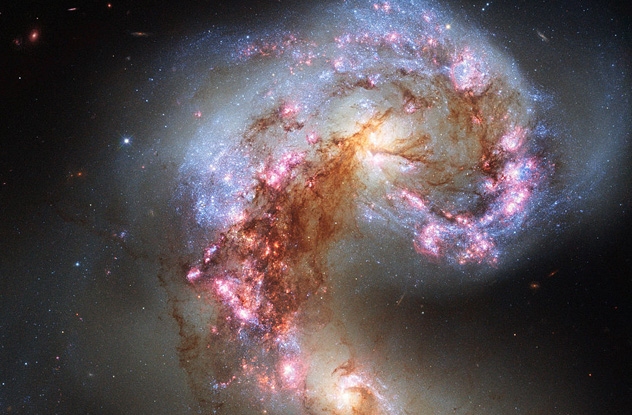 Stars love to live in groups. Large enough groups are called globular clusters and contain up to one million stars. Such regions exist throughout the universe—there are at least 150 of them in our Milky Way—and all are unfathomably old, giving no clue to their formation. But a recent, incredibly rare celestial object has been discovered—a pre-natal globular cluster, full of gas but lacking in stars.

Deep within the Antennae galaxies 50 million light-years away, a giant cloud with the mass of 50 million suns will hopefully birth many stars. It’s the first time astronomers have found such an object, and they’ve likened it to a “dinosaur egg that’s about to hatch.” Technically, it’s probably already hatched long, long ago, as it’s believed such regions remain star-free for only about one million years.

This discovery is very exciting, as we could get a tiny glimpse into one of the most ancient, mysterious processes in the universe. It’s possible that regions like these are responsible for birthing most, if not all, the staggeringly beautiful globular clusters we see today. 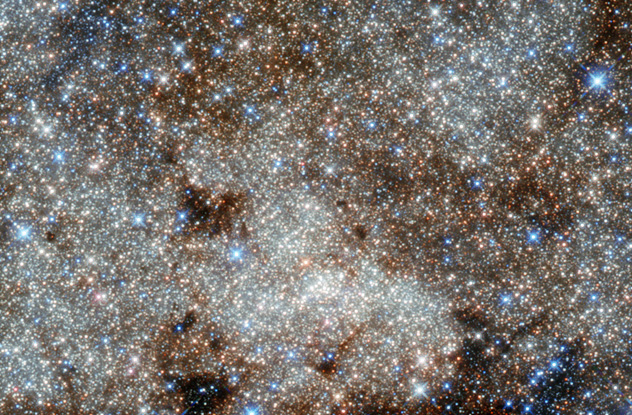 Carried aboard a pimped-out Boeing 747SP jumbo jet, NASA’s Stratospheric Observatory for Infrared Astronomy, or SOFIA, does most of its (her?) work at 12,000 meters (40,000 ft) and above. Up here, there’s little atmospheric water vapor to distort measurements, and NASA gets a much clearer view of the cosmos.

Recently, SOFIA earned its keep by helping astronomers solve a cosmic mystery. As you know if you’ve watched any space show ever, stellar material is the basis of humans and everything else in the universe. But it was unclear how these tiny grains of stardust avoided vaporization at the hands of the supernovae that distribute them throughout the universe.

Peering deep into the 10,000-year-old Sagittarius A East supernova remnant with its infrared eyes, SOFIA discovered that dense regions of gas around the star cushion cosmic dust particles. This prevents their eradication as they rebound from the massive shockwave of the preceding blast.

Even though only 7–20 percent of the dust around the Sagittarius A East managed to survive obliteration, this is still enough to birth around 7,000 Earth-sized bodies. 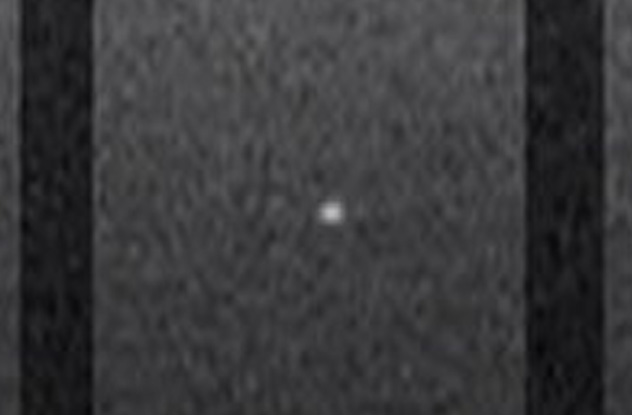 The Perseid meteor showers light up our skies every mid-July to late-August, but stargazers fixing their eyes upward might be better served staring at the Moon.

On August 9, 2008, amateurs did just that and glimpsed something unusual—lunar impacts. Rocks and space pebbles strike the Moon regularly, thanks to its lack of atmosphere. But some of the Perseids, themselves children of the slowly disintegrating comet Swift-Tuttle, died gloriously in a flurry of light against the lunar surface. And the whole shebang was readily visible to anyone with a modest telescope.

Since 2005, NASA has reviewed about 100 such lunar impacts. And with enough data, they can hopefully protect future astronauts from bullet-like meteoroids that can strike Moon-dwellers without a moment’s notice. Predicting these strikes, which explode with the power of hundreds of pounds of TNT, is impossible. But picking out any potential patterns is undoubtedly a boon for future missions. Just in case you’re planning a lunar vacation yourself, you can consult a meteoroid hazard map online. 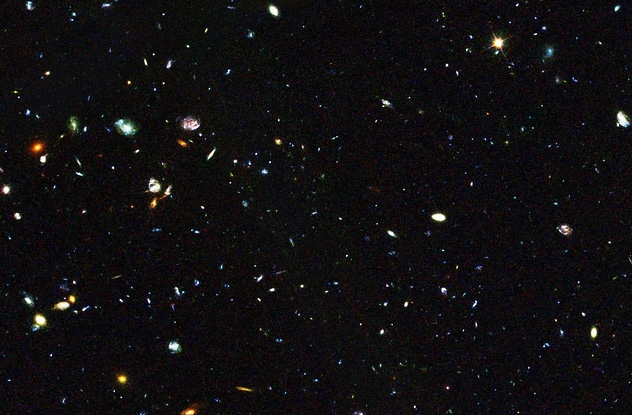 Dwarf galaxies are tiny but incredibly potent, showing us on a cosmic scale that size doesn’t matter—it’s how you use it that counts. Astronomers have previously performed astronomical surveys to ascertain the rate of star formation in mid- and high-mass galaxies, but not until recently did they study the smallest ones. And so they peered eight billion years into the past to determine a relationship between galactic mass and star-forming prowess.

After Hubble had glimpsed the miniscule galaxies in infrared, astronomers were surprised to find that the dwarfs produced stars at a much faster rate than their larger, more massive brethren. That’s quite shocking, since you’d expect more gas to equal more stars. However, the tiniest galaxies proved the most productive with an ability to double up their cache of stars in only 150 million years.

In a normal-sized galaxy, such growth would require between one and three billion years of hard gravitational work. Sadly, astronomers don’t know why the dwarfs are so prolific, but they hope to pry their secrets open as they discover similar specimens at different points in their evolution.