There’s a reason we call feces and urine “waste products”—the body ceremoniously rids itself of the material because we simply have no use for it. And yet, throughout history, people have found all sorts of applications for these substances, showing that the ingenuity of mankind knows no bounds.

Cow urine is seen by many as a great medical cure-all, especially in India. Hinduism considers cows sacred and sees them as both spiritual and practical gifts. Cow urine therapy has long been thought to cure a wide variety of ailments from high blood pressure and stomach problems to heart disease, cancer, and AIDS.

Research labs in India are using cow urine—and dung—to create supposed miracle cures totally new to the medical community. Only they’re not truly new, say the researchers, because the recipes come from ancient Hindu texts and are simply being applied in a newly scientific way. According to modern analysis, cow urine contains high amounts of iron, nitrogen, sulfur, sodium, and other minerals in a combination that may restore balance to these substances in the human body. The Cow Urine Therapy and Research Institute even claims that the copper in cow urine transforms into gold as it removes toxins in the body.

Cow dung is also highly valued; fresh antibacterial dung allegedly heals wounds, while dry dung is unmatched as a facial scrub. But not just any cow produces such miraculous urine and dung. You must harvest these precious elixirs from virgin cows—sometimes harvest them directly, as the above video shows.

The important question, of course, is: Does any of it really work? Though some of the wilder claims are clearly nonsense, others have actually attracted analysis from scientists. A new drug containing cow urine as an antibacterial agent has been granted a US patent—which says nothing about its effectiveness, but it certainly gives the drug the sheen of legitimacy. And though nothing supports cow urine’s alleged anti-cancer properties, a study from the International Brazilian Journal of Urology found that cow urine helped prevent kidney stones in rats. 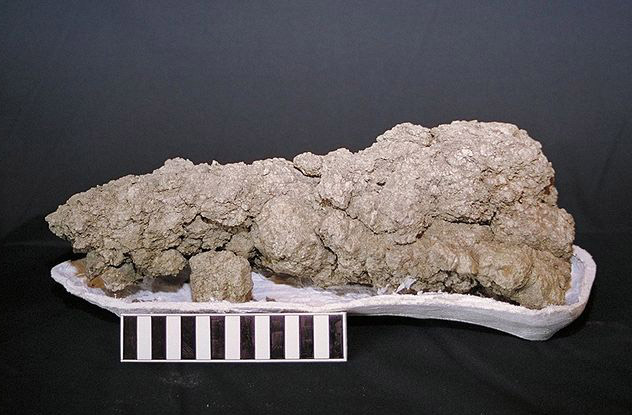 “Coprolite” is the polite way of saying “fossilized poop.” Analyzing these paleontological gems can break new ground—we discovered dinosaur coprolites before finding the dinosaurs that had left them. Some coprolites contain teeth, bones, fur, and other remains of prehistoric plants and animals, shedding light on dinosaur diet, environment, and hunting habits.

More recent types of coprolites have given up relics of our own past, including the oldest known human hairs. Those were found in coprolites left by a hyena in South Africa between 195,000 and 257,000 years ago, when several types of early humans were wandering the plains. It’s thought that the hairs ended up preserved in hyena droppings after the wild animals were scavenging an early human carcass.

And, of course, there’s also a trendy, modern use for the more elusive dinosaur coprolites: jewelry.

8Manure And Urine For Gunpowder 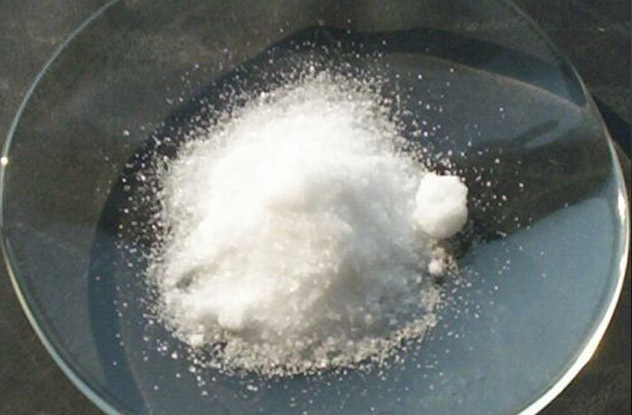 In 1862, a South Carolina College professor published a manual for the manufacture of gunpowder. He detailed several different methods, but all of them had a very important ingredient—saltpeter. Saltpeter (potassium nitrate) can be found in nature, usually scraped out of caves, but the Civil War demand for gunpowder far outstripped the amount of readily available saltpeter, so people had to manufacture it.

They did this using nitre-beds, which were piles of manure encouraged to rot by applying ammonia. Ammonia was readily available in the form of urine, which was applied every week or so, when some unlucky sap had the task of stirring the pile of manure, compost, and urine to make sure the soaking was complete.

As the chemical processes acted on the rotting pile of excrement, the liquid evaporated, leaving white crystals of saltpeter on top. It built up a crust that men harvested and used to prepare gunpowder. Similar methods were used in Switzerland and Sweden.

The process, of course, needed a constant supply of urine. Throughout the Confederate states, it was advertised that the patriotic duty of civilians demanded they collect their urine for use in gunpowder manufacture. 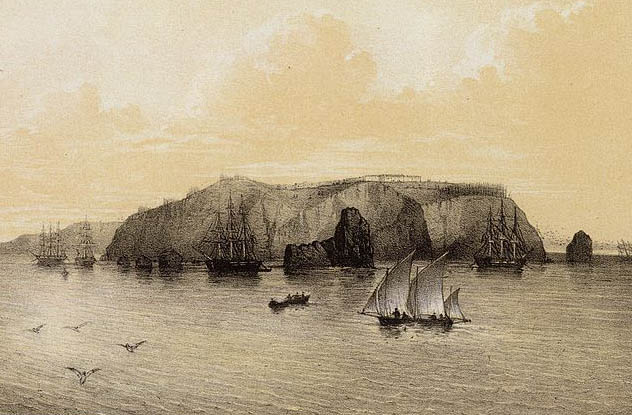 In the 19th century, Peru made a bizarre discovery. Off their coast sat the Chincha Islands, home to thousands and thousands of birds. Because the islands don’t get much rainfall, and because plenty of birds there did what birds do best, the islands were an unlikely treasure trove—a treasure trove of guano. It had been collecting for countless years, and some piles of compacted bird guano ran hundreds of feet deep.

So Peru started mining guano, mostly using labor provided by convicted felons and indentured servants from China. But like all discoveries of wealth and natural resources, Peru’s guano trade wasn’t always peaceful. After a majorly prosperous year of booming trade, rival nation Chile wanted in on the action and seized control of the guano-producing islands in 1879.

The ensuing war lasted four years. At the end of it all, Peru was in massive debt. Not only had the war cost them dearly, but they had taken out huge loans, assuming their lucrative guano trade would continue profitably. It didn’t.

Water pollution is a massive problem all over the world, and it’s a problem that’s difficult and expensive to address. In a weird leap of logic, UK scientists started looking at dung as a major component in water filtration systems. And it worked—running contaminated water through dung neutralizes acids and removes most contaminants.

The effectiveness is largely due to a single type of bacteria called Desulfovibrio that’s often found in manure. The bacteria start a chain reaction that ultimately removes impurities. Horse and cow manure both work, and in the case of an area in Bolivia hugely contaminated with chemicals from their mining industry, the llama dung close at hand is also effective.

The effects of this cheap water filtration system are huge. Though people might not be too keen on drinking manure-filtered water, the system cleans entire lakes and ponds, making them once again habitable by plants and animals. 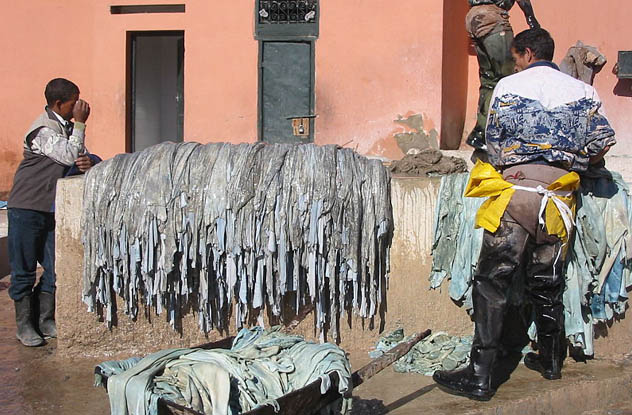 We’ve long relied on animal hides, fur, and wool as staples of our clothing industry. These products all need to be treated before they’re useful, and that treatment almost invariably involves urine from one source or another.

Untreated leather becomes stiff when cold and will rot in hot weather, so tanning it creates a reaction that keeps it pliable. China uses a centuries-old process of soaking the hides in urine from dogs or horses.

Clothing and blankets made from wool shrink when they’re washed, but there’s a way around that, using—you guessed it—urine. Wool cloth was often pre-shrunk in a process called fulling. The cloth was submerged in old urine (or sometimes a mixture of animal fat and lime) and was then agitated in the mixture to shrink it.

Urine was also used in the process of fixing dyes to material. The main ingredient in the process of dye fixing was alum, which was quarried and then mixed with human urine. At one point, so much demand hit the alum plants in Yorkshire, England that human urine had to be shipped in from London. People on London streets were invited to fill buckets, which were then transported to Yorkshire at a rate of about 200 metric tons of urine (220 tons) a year. 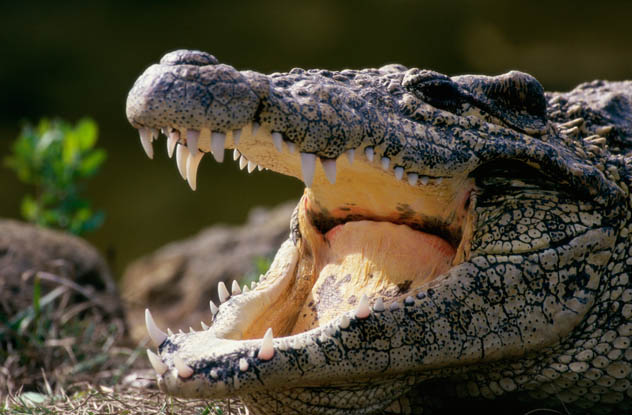 A medical document dating to 1850 B.C. revealed a very odd ancient Egyptian method of birth control. It gave a recipe for creating a suppository (or pessary) with a base of crocodile dung. One option called for the dung to be mixed with fermented dough. Another included honey and saltpeter. Dung and sticky substances like honey were thought to trap and prevent sperm from traveling any farther than the pessary.

Unfortunately, crocodile dung wasn’t the best choice. The dung’s alkalinity would have lowered the acidity of the vagina, making the woman more likely to conceive.

Why crocodile dung? The choice of animal likely resulted from the crocodile’s connection with the god Set, who was associated with abortion and miscarriage. 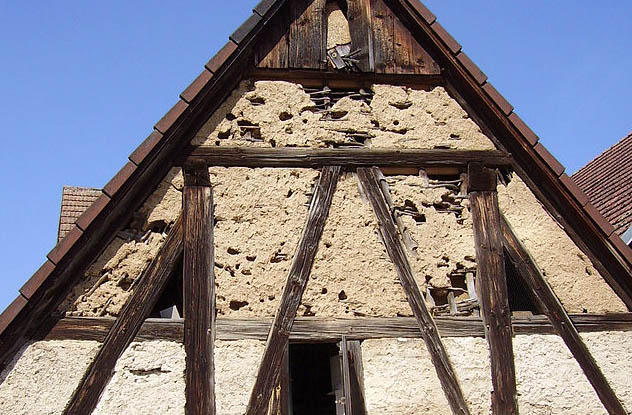 Britain used cow dung as a building material all the way back in the Neolithic era. The most common type of dung-based building was constructed with the wattle and daub method. This uses a framework (“wattle”) of vertical poles with branches woven around them, much like the side of a basket. In order to strengthen the structure, a mixture (“daub”) is applied over the framework and allowed to dry. Daub was traditionally made of whatever was at hand, and throughout history, one thing that always seems to be at hand is dung.

Daub often also contained a mixture of other natural materials like moss, leaves, and mud. Heating the mixture created a strong wall that withstood the elements. The process worked so well that when the Romans invaded Britain, they continued to use the local wattle and daub construction methods instead of replacing them with something decidedly more Roman—although, according to journals, not all of the Romans were thrilled about being reduced to building with dung. 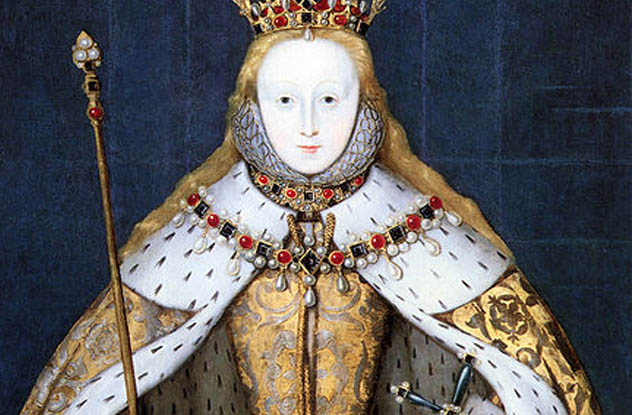 In ancient Greece, women would take wool from sheep and use the sweat that coated it for a face cream to cover blemishes. That, of course, isn’t the only bodily fluid from animals that was used. Crocodile dung, in addition to its use in birth control, was dried and applied as a face cream to create the illusion of pale skin.

Dung was also instrumental in one method of creating a very popular—and very deadly—face paint. Ceruse, used most famously by Queen Elizabeth I to create her trademark pale complexion, was used for thousands of years by women from Europe to the Middle East. A variety of methods created ceruse, and in the early 1800s, a Roman manufacturer shared his formula. In addition to reacting lead and vinegar to create the toxic and highly desired white powder, he used horse dung as insulation to keep the temperature in the room consistent. Pots containing the lead and vinegar solution were covered with dung to heat them to 50–68 degrees Celsius (122–156 °F). The dung was abundant and cheap, and it was easy to move when workers had to both refill the vinegar and empty the pots of the final product. 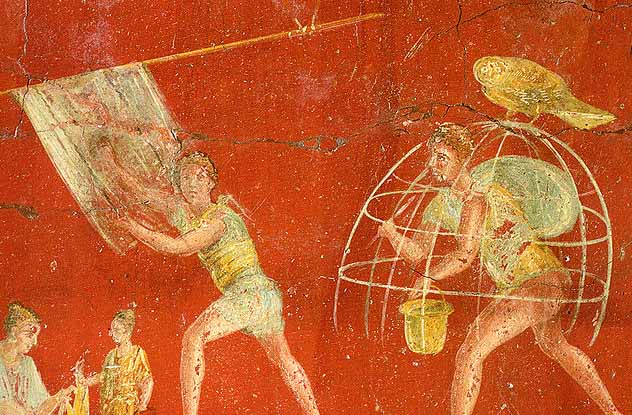 In the grand scheme of things, soap is a relatively recent invention. Before that, people had to make do with what they had on hand, and in ancient Rome, if you wanted your clothes really clean, you used urine.

A Roman laundry was called a fullo, and it employed boys who would walk on clothing that was submerged in a mixture of water and urine. The urine was partly from animals but mostly human, collected in jugs placed on street corners for citizens to make their contributions. The fulloes placed such a great demand for urine on cities that in some areas, they were required to pay a tax on the urine they collected.

Because of the harsh treatment, the garments were often further treated with other substances to restore their color; white linens were rubbed with a white dirt called cimolian. In ancient Rome, urine was also used for cleaning something else: teeth. Teeth whitening used urine to bleach away stains.