First developed by Gordon Gould during the 1950s, lasers are one of the most popular and widely used devices in modern society. The optical beams can be found in everything from weapons guidance systems to hair removal surgery. However, that was not always the case. Originally, Gould and his peers struggled to find practical applications for their new invention. In fact, one of the pioneers, Irnee D’Haenens, once described the device in jest as “a solution looking for a problem.”[1]

Nowadays, the technology is practically ubiquitous, and lasers—or, to give them their full title, light amplification by stimulated emission of radiation—are a cutting-edge tool used in developing all manner of brilliant innovations. With them, we are able to cool atoms to a fraction of a degree, create incredibly advanced systems of data storage, and even detect evasive astronomic phenomena like gravitational waves. Sixty years since their invention, laser technology remains as relevant and exciting as ever.

Chirped pulse amplification (CPA) is one of the most remarkable innovations in modern technology. The groundbreaking technique is used to produce high-intensity laser pulses without destroying the material through which the light is moving. Optical bursts are stretched in time to bring down the peak power and then amplified before being compressed, forming a pulse of light with phenomenal intensity.[2]

First developed in the mid-1980s, CPA has become commonplace in corrective eye surgery, in which high-intensity lasers are used to reshape the cornea. Other potential fields of application include quantum computing and data storage. In fact, scientists hope that the principles of CPA could be used to build computers that operate with unprecedented efficiency—up to 100,000 times faster than current models.

Although it is far from being realized to its full potential, the laser technique has several significant applications and has made a number of considerable scientific contributions. As such, two of its key developers, Donna Strickland and Gerard Mourou, were awarded the 2018 Nobel Prize in Physics. The decision was welcomed by large swaths of the scientific community; Strickland is the first female physicist to be made a Nobel Laureate since 1963, and only the third in the prize’s history.

It might not seem like a major issue, but wet leaves on the track wreak absolute chaos in the rail system. The regular pressure of passing trains causes the leaves to become torn and compressed, which, over time, leads to a slippery coat forming. The treacherous debris reduces the friction on the line, creating dangerous conditions for any oncoming trains.

Typically, rail companies will attempt to blast the leaves from the line with jets of water or use sand to bolster the friction. However, both of these solutions have been known to damage the tracks, plus water and sand are both cumbersome materials to carry.

The company LaserThor has come up with an alternative solution to the leaf issue: Blast the leaves off using lasers. A 2-kilowatt Nd:YAG laser vaporizes organic material by heating it to an eye-watering 5,000 degrees Celsius (9,032 °F). In 2014, Dutch company Nederlandse Spoorwegen agreed to try the system on one of their DM-90 trains. As well as searing off leaves and other debris, the heat of the beam also dries the rails, preventing them from rusting.[3] 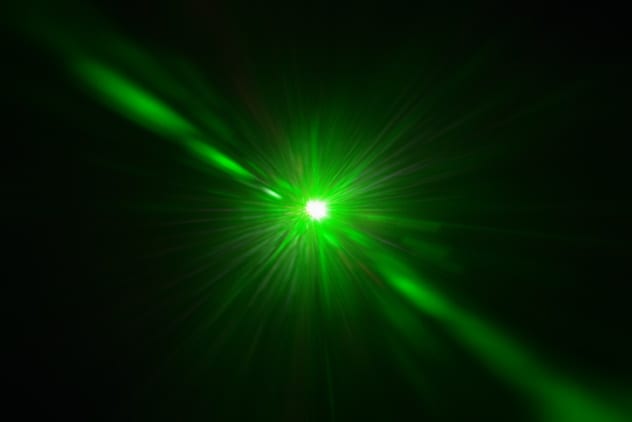 It might sound counterintuitive to use lasers to cool a substance down—after all, don’t they usually make objects hotter? However, in the mid-1980s, pioneering physicist Steven Chu demonstrated how laser beams can be used to cool atoms down to extremely low temperatures.

Particles in a gas exhibit frenzied behavior—darting about at high speeds with an abundance of energy. However, as the gas is cooled, the particles begin to lose their energy, and there is a marked drop in speed. In other words, slowing down the atoms causes the temperature of a gas to fall.

This is the essence of laser cooling. When an atom is moving toward a laser, it absorbs photons from the beam and begins to slow down. As they slow down, the decelerating particles will lose some of their energy and thus begin to drop in temperature.

The basic theory suggests that 20,000 photons would be required to bring the momentum of a sodium atom down to zero. This may seem difficult to achieve, but Chu has stated that, with the right level of tuning, lasers can inhibit around ten million absorptions every second. With laser cooling, atoms could be brought to a near-halt in milliseconds.[4]

Over the past three decades, the technique has developed to an astounding extent. Physicists are now able to cool atoms to a billionth of a degree above absolute zero. 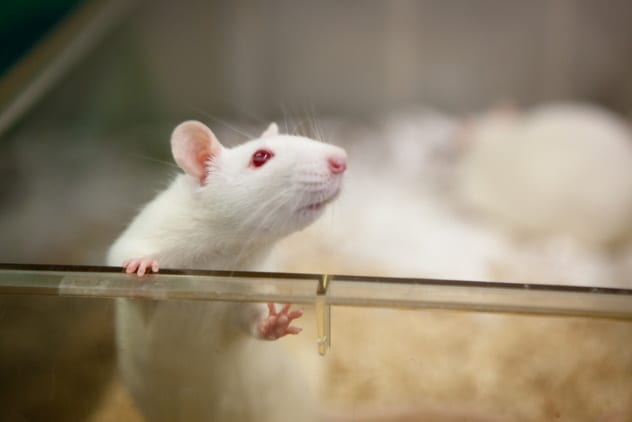 In recent years, scientists have developed multiple techniques to alter the behavior of rodents. A handful of these involve lasers.

Laser technology has enabled scientists to reverse alcoholism in rats. A group of experts from Scripps Research, a medical institute in San Diego, California, managed to reduce the creatures’ dependence on alcohol. The team’s paper, published in March 2019, describes how they implanted fiber optics into the rats’ brains and targeted specific neurons with a laser beam. Scripps professor Olivier George has described the technique as being as quick and effective as a “flip of a switch.”[5]

Although their work is nothing short of remarkable, Scripps Research is not the first institute to use lasers to manipulate small, furry creatures. Two years previous, researchers from Yale University developed a similar technique to activate predatory instincts in mice. By shining blue light at neurons in the rodents’ temporal lobes, researchers were able to stimulate biting, grabbing, and other killer behaviors. 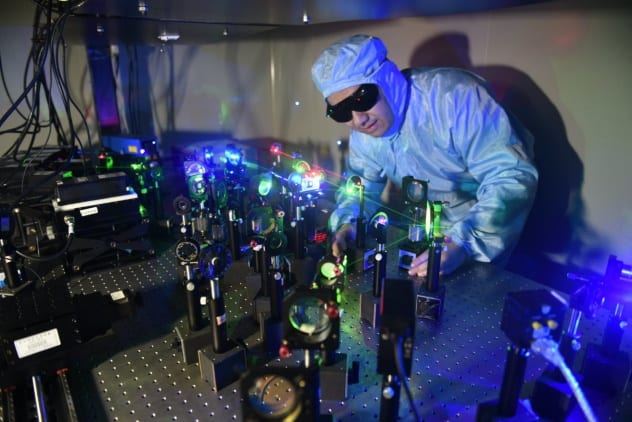 Since the launch of the compact disc in the 1980s, laser technology has played an essential role in the recording, storage, and retrieval of data. However, this technology has limitations. In all optical storage techniques that are currently available, data is written onto the surface of a disc. This means that the total amount of data that can be stored in a device like a DVD is constrained by its surface area.

To overcome the issue, scientists are looking to a new technique to improve the storage space of optical devices: holographic data storage. These devices would be able to hold masses of information in the form of three-dimensional holograms. Not only does this significantly raise the amount of data that can be held in a given area, but it is also said to be a more efficient and reliable method.

However, there is one major setback preventing you from picking up the latest blockbuster or hit album in holographic form: This technology only exists as a prototype. In recent years, developers have tried to produce a commercial technique for holographic storage, but none have taken off as yet.[6]

The most promising development comes from the Northeast Normal University in China’s Jilin province. Researchers at the university have developed a semiconductor film made from titanium dioxide and silver nanoparticles. To write data onto the film, a laser system alters the charge of the silver nanoparticles, and the particles are affected differently, depending on the wavelength of the light. 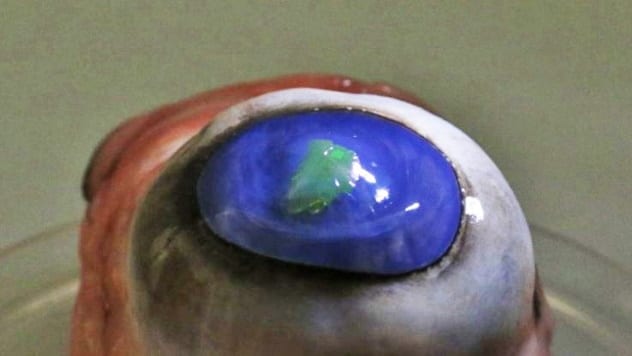 Although it cannot hold a candle to Superman’s laser vision, scientists have developed a sophisticated contact lens that shines laser light out of your eyes. This impressive feat is possible due to the creation of an ultrathin film—only a thousandth of a millimeter thick—which can be attached onto or embedded into a contact lens.

The technology was revealed in May 2018 by a team of physicists from the University of St Andrews, who told reporters that it could be used to create wearable security tags. When tested on a cow’s eyeball, the lens generated a laser beam with around a nanowatt of power.[7] 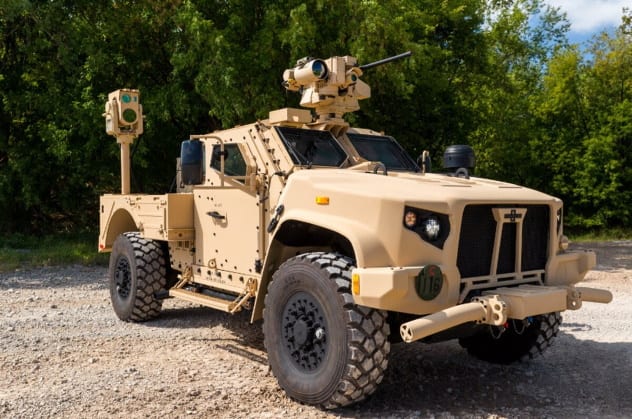 They might sound like something from the imagination of a Star Trek fan, but laser weapons are the future of military technology. In the past few months, the US Marine Corps has begun testing of their Compact Laser Weapons System (CLaWS)—a vehicle-mounted system (pictured above) designed to bring down enemy drones (aka UAVs). Compared to traditional firepower, the laser weapon is not only better value for money, but it also makes it far more difficult for drones to track and target ground troops.

As tensions escalate in the Middle East, Turkish forces are also using weaponized lasers to display their military innovation and prowess. In fact, they have become the first country to bring down an opposition vehicle using a ground-based laser system in combat. In August 2019, Turkey deployed their laser weaponry to attack and destroy an armed UAE drone circling over the Libyan district Misurata.[8] 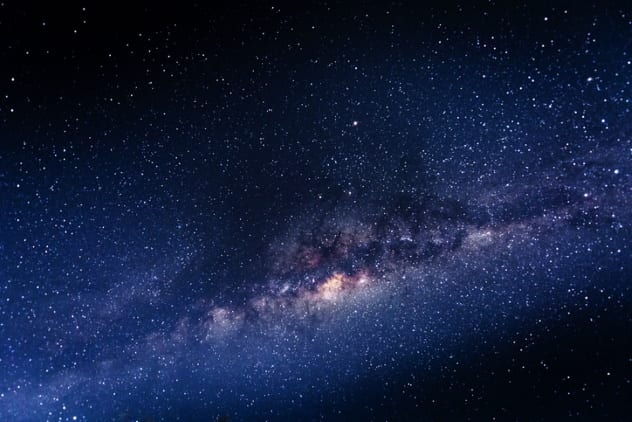 When researchers from LIGO announced that they had detected gravitational waves for the first time in 2015, physicists and astronomers around the world held their breath. Until that point, gravitational waves had proved incredibly elusive. Although they were first predicted in 1916, it took almost a century of technological innovation before scientists were actually able to catch a glimpse. That astonishing feat—the first direct observation—was only possible due to laser technology.

Gravitational waves are cosmic ripples echoing across the universe at the speed of light. As they travel through space, the waves warp and distort their surroundings in a way that can be measured using sophisticated, highly sensitive laser detectors.[9] LIGO, the underground gravitational wave observatory, uses lasers and mirrors to detect infinitesimal changes that occur whenever a wave passes through. 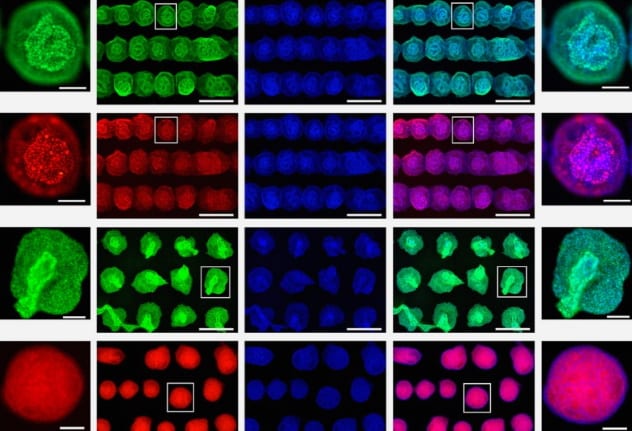 Bioprinting is an emerging and highly sophisticated process used by medical experts to manufacture synthetic organs and tissues. Typically, these artificial replicas are created by depositing droplets of bioink layer by layer to build up working 3-D structures.

In 2018, a team of researchers from Laser Zentrum Hannover developed a technique for bioprinting a type of stem cell known as hiPSCs—human-induced pluripotent stem cells. These cells incredibly versatile, able to change into any other type of cell in the human body. As such, they have excellent potential as a material for building replacement organs or personalized drug testing systems.

Prior to bioprinting, the hiPSCs are suspended in bioink and layered onto the surface of a glass slide. A second glass slide is positioned directly beneath the first. Droplets of biomaterial are then ejected from the higher glass slide onto the lower using brief pulses of laser light.

So far, the preliminary tests have proven successful. Almost all of the cells survived the laser printing process and retained their properties, too.[10]

Previously in the article, we touched on Donna Strickland and Gerard Mourou, two of the physicists who were awarded the Nobel Prize in 2018 for their pioneering work on chirped pulse amplification. That year, a third optical trailblazer was also endowed with the prize: Arthur Ashkin, the American physicist renowned for inventing optical tweezers.

Optical tweezers are remarkable instruments with a broad array of biological applications, ranging from investigating the movement of live bacteria to examining the properties of DNA. Ashkin’s technique uses a highly focused infrared laser beam to suspend microscopic objects in midair, capturing them in the center of an optical trap. As the object interacts with photons from the laser, it is acted upon by the scattering and gradient forces that keep it locked in position.[11]