Human beings are a very creative species. We’ve fashioned clothes for ourselves, made fire do our bidding, and flung monkeys off our planet to starve in the blackness of space. But one of our most impressive accomplishments has always been our architecture. Just look at some of the tallest buildings in the world, and it seems like there must be nothing we can’t create. But not all the ideas are winners or get off the ground. Sometimes, they’re before their time or just too far out there for the general populace to accept. 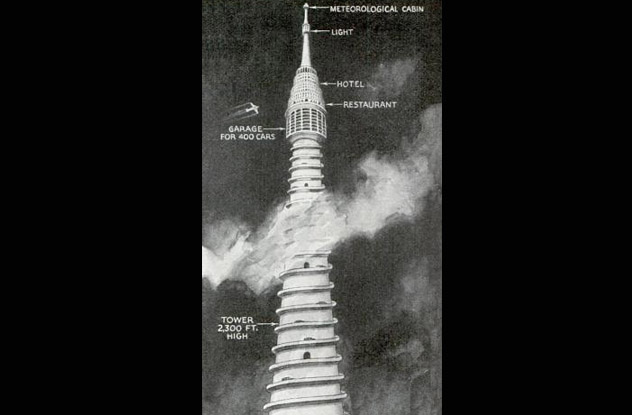 In 1937, Paris almost became the home of a 700-meter (2,300 ft) tower with a road spiraling up its entire height, like an automotive barber pole. The top of the tower would be a hotel, and you could drive from the ground all the way up into its parking garage, which would house up to 400 cars. A restaurant would be sandwiched between the hotel and garage, like a triple-decker of architectural insanity.

A monorail system would hold descending cars in place and control their speeds, so they wouldn’t careen through the guard rails and drop to their (presumably explosive) deaths. On the way up, however, cars would operate totally under their own control, which seems like a pretty huge oversight, since fatal accidents occur on perfectly normal roads.

The tower was never built, presumably because it flies in the face of everything we know about how buildings are supposed to work. 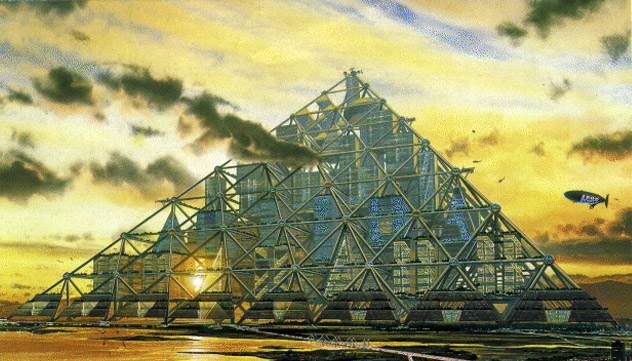 The Mega-City Pyramid is a proposed giant, floating pyramid in Tokyo Harbor. It would be so enormous that it could house one million people and so tall that 100-story skyscrapers could fit inside it easily. The idea makes a lot of sense in theory—Japan is very crowded, and some designer probably looked at Tokyo Harbor and thought, “If only this fish living space were people living space, there’d be more room!”

The Pyramid will be made up of five trusses stacked on top of one another, each about the same size as the great pyramid in Giza. The finished pyramid itself would be about 14 times the height of Giza’s.

If built, this would be the largest structure on the planet, but it’s so enormous that none of our currently available materials could handle the strain—they would literally tear apart under the structure’s weight, and if one truss fails, nearly a million people tumble into the sea. So we’ll have to file this one under “science fiction” until we master carbon nanotubes, which could lead to a strong enough construction material. 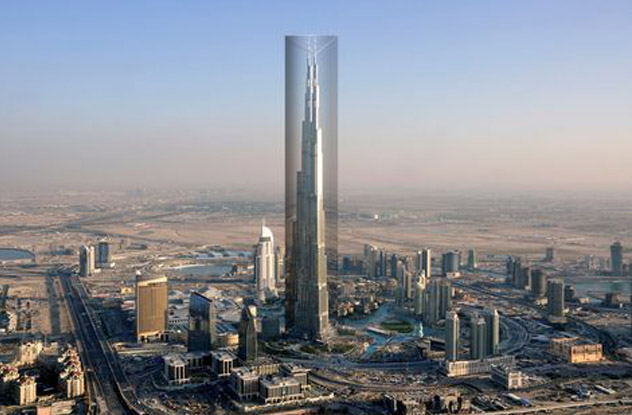 A project has been proposed to cover the world’s tallest building, Dubai’s Burj Khalifa, in a fabric “sock.” Such an undertaking would require an enormous sheet exposed to elements and enormous strain, so you might assume this serves some higher application. Perhaps it will harness the power of the wind to smite Dubai’s enemies or something like that.

Actually, the lead designer of the project says, “In the spirit of exploring creative potential in the public realm, Exo-Burj aims to create a fluid urban ambience.” Or in English: “Because it looks neat.”

One of the features the project designer lauds is that visitors can “walk up-close and experience the installation firsthand.” Yes, one of the selling points is literally “you can walk up and touch it,” which is not exactly a revolutionary idea in the world of construction. The installation will be temporary—if they follow through, they’ll effectively set up the world’s largest art exhibit, only to tear it back down a short while later. 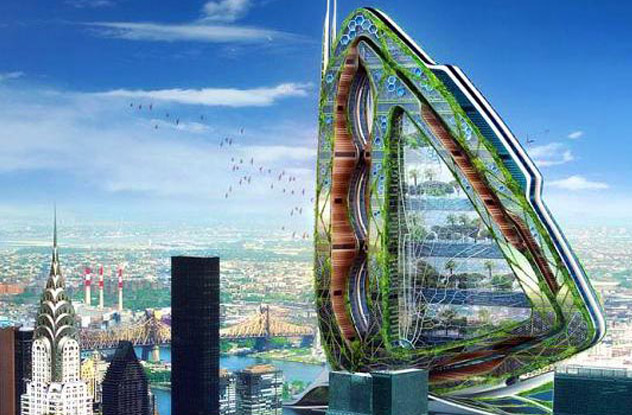 If there’s any complaint to be made about farming, it’s that you can’t do it hundreds of feet in the air, and vertical farming is out to solve that problem. Vertical farming grows crops in skyscrapers, and the concepts look pretty artsy, like a digital age version of the Hanging Gardens of Babylon.

Vertical farming would solve a lot of issues if it were at all feasible. It’s estimated that 80 percent of people will live in urban areas by 2050 (as opposed to the current 60 percent). Some project that this kind of distribution, coupled with the added strain of a growing world population, could lead to shortages of food and farmable land. Vertical farming literally creates farmland on floor after floor. Couple that with the land being indoors in a controllable climate, and you could also farm all year round.

Propositions for vertical farms include the Dragonfly, a dragonfly wing–shaped prototype smack dab in the middle of New York City. The main problem with the idea is that technology hasn’t quite caught up with our aspirations yet. 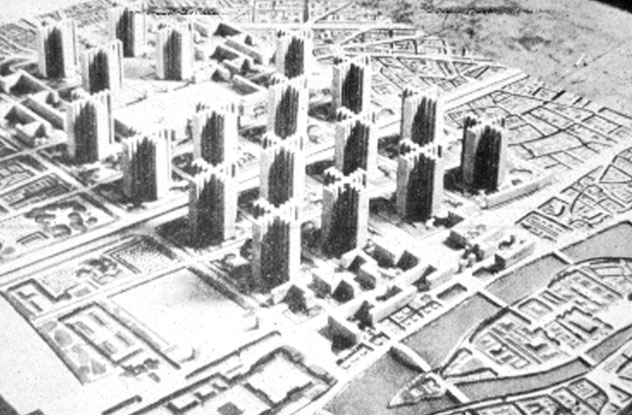 The Road Tower wasn’t the most extreme plan proposed for Paris. This city is quite possibly the most romantic and beautiful place on the planet, but back in the 1920s, architect Le Corbusier wanted to knock it to the ground and rebuild it in a decidedly different fashion, which he called Plan Voisin.

Historic Paris would be leveled, and in its place, Le Corbusier would build 18 enormous glass towers. These towers, connected by subway stations and surrounded by a sprawling garden city, would house Paris’s entire business district.

At the time, dismantling Paris made some sense because a lot of it was filthy and in disrepair, but it’s hard today to imagine a world where the Paris we know doesn’t exist. 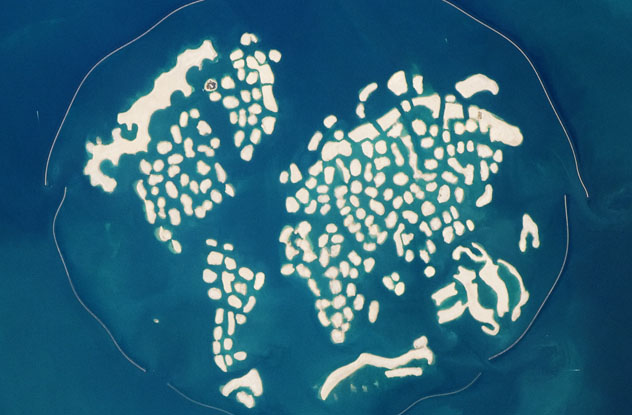 Dubai has no shortage of wild construction projects, but this particularly crazy one actually got off the ground—before failing miserably.

The idea behind the World was to create a set of islands off Dubai’s coast in the shape of the continents. Then these islands would be sold off and lived on. They wound up building the islands, though not all the necessary associated structures. Then the global economy tanked.

Today, only one of the islands is inhabited—a part of “Greenland,” owned by Dubai’s ruler. And despite the company’s claims to the contrary, the project has stalled out for so long that the other islands are starting to erode back into the sea. The World is crumbling, and if its designers don’t get the funds together to finish the project, it will eventually wash away entirely—even though 70 percent of the islands have already been sold, some to celebrities like David Beckham. 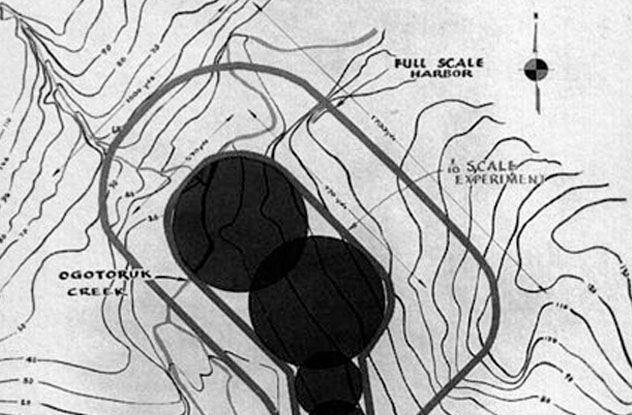 Sometimes, the end result of a construction project isn’t a crazy building or a weird concept. The truly bizarre part of the project is sometimes the means of construction. Enter Project Chariot, otherwise known as “Operation Nuke a Harbor Into the Side of Alaska.”

Shortly after dropping bombs on Hiroshima and Nagasaki, the US was determined to prove to the world that atomic weaponry could be used for peaceful, productive purposes. Edward Teller (creator of the hydrogen bomb) got the bright idea to use a handful of nukes as a makeshift shovel to widen the Panama Canal and to dig a harbor in Alaska.

A village named Point Hope stood 50 kilometers (30 mi) from the site of the harbor. And remember, this was the ’60s; we knew what radiation poisoning was. But that didn’t stop the government from outright lying to the citizens in Point Hope and telling them there was no possible danger whatsoever.

The project was ultimately shelved because the residents of Point Hope wouldn’t stop protesting. Plus, it was just easier to blow stuff up in the middle of the Nevada desert, where we already had a test site. 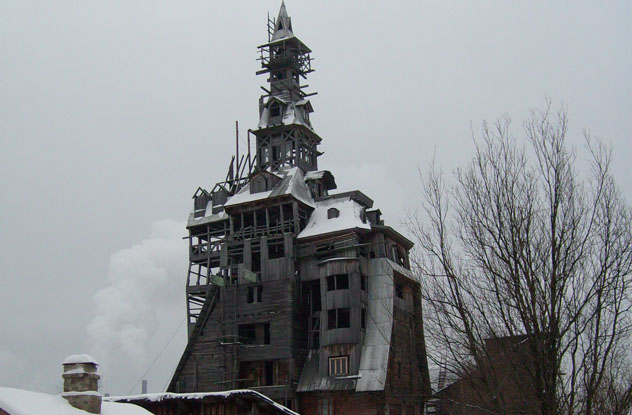 Not all insane construction ideas are on a grand scale. In 1992, Nikolai Sutyagin wasn’t satisfied with his home in Arkhangelsk, Russia, so he decided to add on to it. And add on. And on—until it became the world’s tallest wooden house, at 13 stories and 44 meters (144 ft).

At first, he added on three floors, but he didn’t like the appearance. Then he added more, and it still didn’t look right. Sutyagin was never really satisfied until he went to prison, and when he came back, he no longer had the funds to support the construction, so the house slowly rotted and broke down around him.

The city council of Arkhangelsk deemed it a fire hazard and wanted him to tear it down, but Sutyagin added a metal slab on the former roof of his home and claimed that everything above that was just decorative, not part of the actual structure. The city wasn’t buying it, and they forced Sutyagin to dismantle his wooden palace. Now all that remains is the original home and pictures of the castle-like structure that it once was. 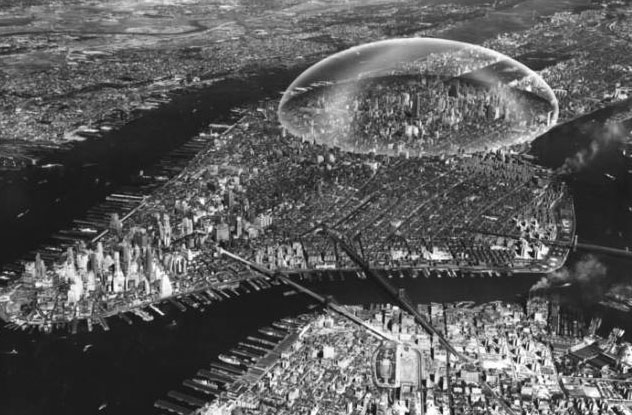 The ’60s were an era of great interest in science fiction, and domed cities repeatedly showed up in these stories. So it should come as little surprise that, during this time, architect Buckminster Fuller proposed doming in a real city: New York City, to be specific.

The dome would cover most of Manhattan and filter pollution out of the air. None of the buildings inside the dome would need to be heated in the winter or cooled in the summer. Instead, the dome itself would be kept at a constant temperature.

Fuller claimed that once he figured out how to actually make the thing, the city would save enough money in heating, cooling, and snow removal to easily pay for the dome’s cost. However, no one really went for the idea. The cost would’ve been enormous, and no one knew if it would really work, so domed cities were forever banished to the realm of science fiction, much to Fuller’s chagrin. 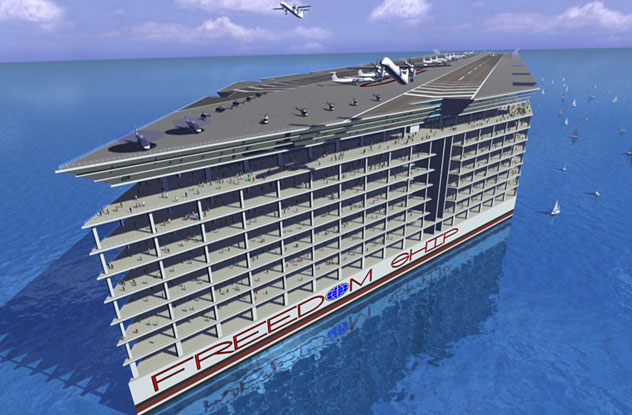 Freedom Ship was originally proposed back in the ’90s as a gigantic, self-sufficient floating city capable of traversing the world. The ship would have its own economy, complete with shops, schools, jobs, and everything else enjoyed by regular, land-bound society.

The 1,371-meter (4,500 ft), 25-story ship would circumnavigate the Earth once every two years, stopping at all major ports along the way. It would be so mind-bogglingly enormous, however, that it wouldn’t actually fit in the ports. Instead, residents would have to fly into the cities—from the airport on the ship’s top deck.

So why didn’t it work out? Well, aside from the massive undertaking of actually building the thing, they had to convince 50,000 people to live on it. No one at the time seemed willing to totally uproot their lives and live on what could very well be the next Titanic. As much of a romantic idea as Freedom Ship was, buyers just weren’t ready to be a part of it in a world of terrorism, conflict, and people fighting even when they weren’t crammed together like sardines.

Even if interest materializes now, the company would have to drum up $9–10 billion to get the project off the ground.

Kier is a writer at Listverse and a workshop moderator and writer at Cracked.com. When he’s not doing those things, he’s farming thousands of feet in the air. With no harness.