Animals can be scary, especially when they hang out in groups. Even the most docile creatures can create terrifying scenes under the right (or wrong) circumstances. Keep an eye out for these creatures the next time you go for a walk, and whatever you do, do not make a crow angry. This list is all about animals who work together to make your nightmares come to life. 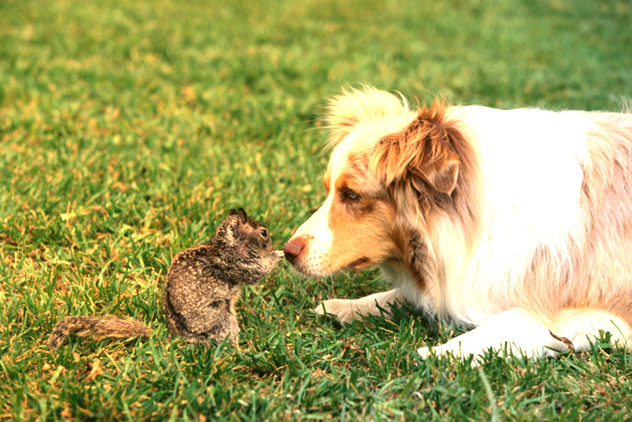 In Russia, squirrels are not to be messed with, a lesson painfully learned by a lonesome stray dog that decided to rile up some park-dwelling squirrels. In late 2005, squirrels ganged up on a large stray dog in Russia and tore it open from limb to limb. The stray was barking up a tree at some squirrels when the squirrels reached their breaking point and attacked. A mob of them scampered down the tree and launched themselves onto the dog. Several parkgoers watched the slaughter from a distance, and when they approached the scene, the squirrels ran away with pieces of dog flesh still dangling from their adorable jaws.

That’s not the only time squirrels have been observed acting as a pack. In 2008, squirrels in Virginia were seen attacking pumpkins to get at the seeds inside. Folklore and personal accounts say that frenzied behavior by squirrels while gathering food before winter foreshadows an arduous cold season. While this has yet to be proven, aggressive and odd behavior does come about when winters are particularly long and severe. Squirrels can behave strangely—and very aggressively—when they lack food sources, particularly protein. 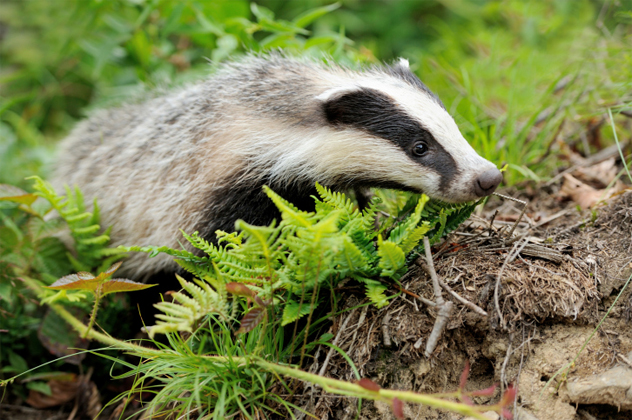 Swindon, England has had to deal with a particularly gruesome problem over the years. Now and then, human remains that were buried in the Victorian Radnor Street Cemetery have been found above ground. The bodies are reburied, but then the same thing happens the next night.

The culprits? Badgers. They’ve been burrowing under the cemetery for years, and that activity has pushed corpses to the surface. The cemetery opened in 1881 and has over 33,000 graves. Relatives are understandably distressed by the problem, but there’s nothing that can be done to keep it from occurring over and over again.

In 1992, the Protection of Badgers Act made it illegal to destroy or otherwise mess with a badger den. The cemetery became an official Local Nature Reserve in 2005, and since then the local population of badgers has exploded. When the badger-exhumed remains are reburied, it’s not always possible to put them where they were originally interred because cemetery volunteers are not allowed to disturb the dens, which are often under the original graves. 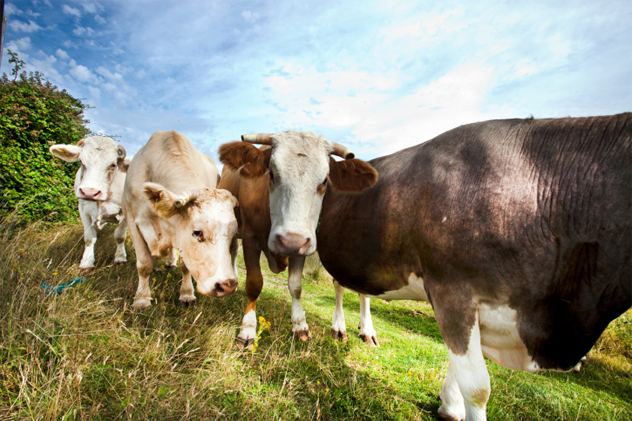 If you’ve ever taken a walk in the rural British Isles, you know that the sight of congregating cows can be slightly unnerving. A 61-year-old woman in Radyr, Cardiff, England discovered that “unnerving” was just the beginning when she was trampled to death by a herd of cows while walking her dog. That incident happened in 2011 near a footpath in a field popular with walkers. Two years prior, another woman, aged 63, was trampled to death in a different part of Cardiff by a different herd of cows.

Cows might seem like docile creatures who just want to munch on grass and meander about, but they can be dangerous when threatened. In these two examples, it’s believed that the cows felt threatened by the ladies’ dogs. When calves are newly born, there is an increased risk for aggressive behavior as well. 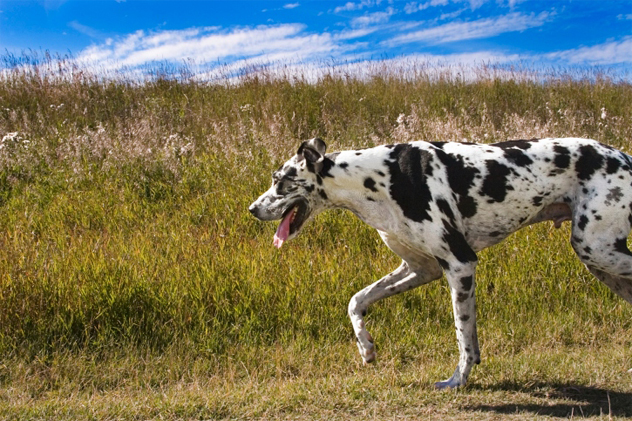 It should come as no surprise that dogs can be aggressive. Many breeds are big and strong enough to kill other animals, including people. A full-on rampage by a pack of stray dogs is not something most of us usually worry about, but maybe we should reconsider that possibility. In 2013, a pack of stray dogs swarmed over Reedley High School in California and attacked their farm. The dogs killed an absurd amount of animals, at least 80 in all. Fifty-four chickens, 25 rabbits, and a pig all died in the massacre. The dogs destroyed cages and caused thousands of dollars in damage.

In 2003, National Geographic reported that the number of feral dogs in the United States was reaching crisis levels. The damage caused by attacks on farms was upward of $37 million in 1999. The 1980s are pinpointed as the beginning of the feral dog problem. Dog fighting was on the rise in the ’80s and many dogs were bred solely for their aggressive nature. When those dogs were abandoned or left to fend for themselves, they took over in the most aggressive way possible. The bankrupt city of Detroit has over 50,000 stray dogs, and the problem obviously isn’t confined to the United States—in 2013, there were an estimated 600 million stray dogs in the world. 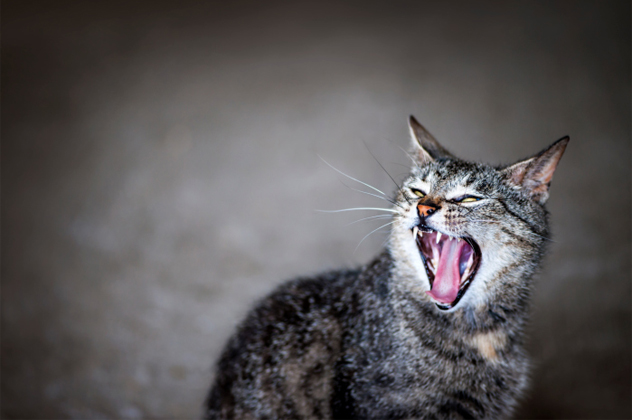 In 2013, a 31-year-old French woman and her daughter were jumped by a clowder, or group of cats. The woman was walking her dog with her young daughter on a Sunday evening when at least six feisty felines came at her. They knocked the woman to the ground and savagely ripped into her arms and legs. She suffered several serious injuries, including a pierced artery. A local veterinarian couldn’t explain the cats’ odd behavior, and said that in his 20 years of practice, he had never heard of anything like it. 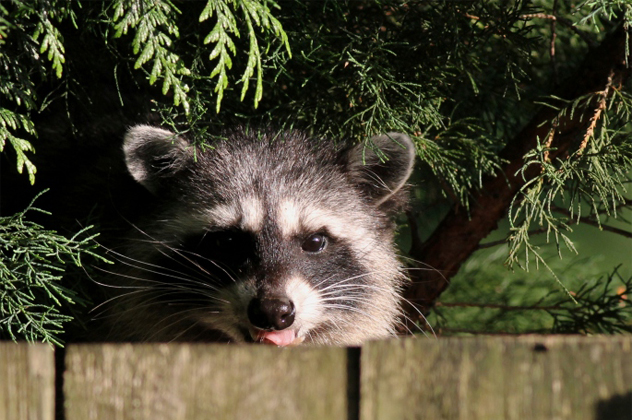 In 2012, a 28-year-old woman in Washington state was attacked by a group of raccoons while jogging near her home. She was at the end of the trail when her dog decided to chase a couple raccoons up a tree. Moments later, the raccoons ran back down—with friends. She ran home while the raccoons clawed and bit at her legs. The attack ended when her dog scared a few of them off, which gave her a chance to get inside her house. The raccoons caused a lot of damage, with the total tally at 100 cuts and 16 puncture wounds.

In 2009, a 74-year-old woman was attacked by five raccoons while trying to get them out of her yard. She was severely injured, but luckily the raccoons weren’t carrying rabies.

The Humane Society says that raccoons are almost never aggressive toward humans. Although they can be active both day and night, they are fearful of humans and usually choose to flee when they feel threatened. When they do attack, though, it’s usually caused by a disease such as rabies, canine distemper, or feline parvovirus. 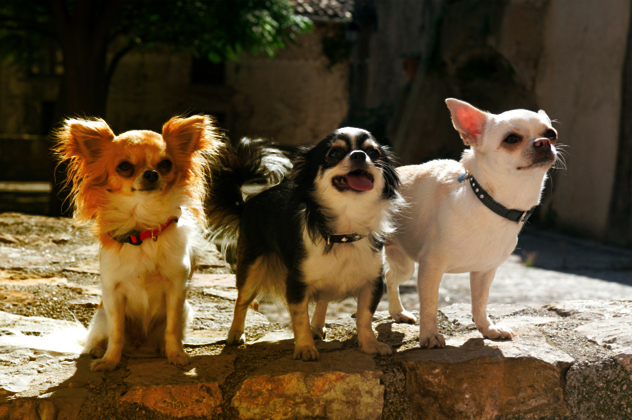 When you imagine a dangerous pack of feral dogs, what do they look like? Your mental picture probably doesn’t include Chihuahuas, a breed made famous by rich housewives and Taco Bell commercials. But for residents of Phoenix’s Maryvale neighborhood, the tiny dog is becoming a big problem: Packs of roaming Chihuahuas are terrorizing the area.

Maricopa County’s animal control center has reportedly received over 6,000 calls about the problem, and most of them are coming from Maryvale. The dogs gather in packs with eight to twelve canines per group, then attack children on their way to and from school. When school is in session, they go from house to house digging up yards and chasing pets who happen to be outside. 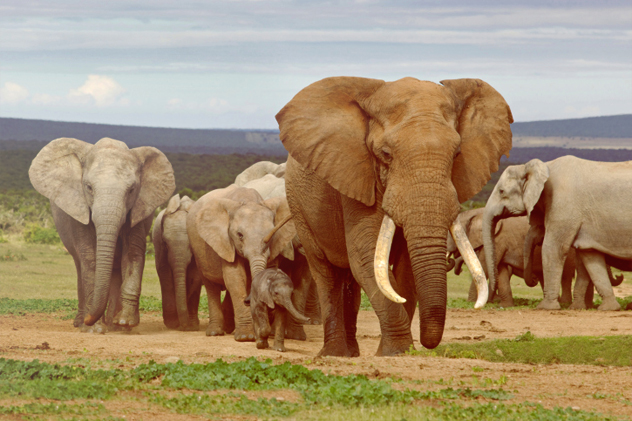 In August 2013, an elephant was killed by a train in eastern India, close to the village of Matari. After the tragic death, a herd of 15 elephants attacked several nearby villages in an apparent act of revenge. They caused extensive damage to at least 10 homes in the area. Revenge attacks by mourning elephants are not entirely unheard of. Elephants carry out funerary rituals where family members will bring plants to place on the body, and they’ll often return to the site of the death multiple times.

Elephants around the world have been reported carrying out attacks on villages. Herds that no longer have a leading matriarch have been known to suffer from post-traumatic stress disorder, and the inexperienced young families often act out in bizarre ways. Due in part to the rising human populations in rural areas, elephants are less afraid of people than ever and are taking revenge for the deaths of their family members and the loss of their habitats. Researchers are slowly realizing that elephants know much more about humans than we would have ever thought possible.

Dolphins are probably the most beloved creatures in the sea, but it turns out that they’re not as sweet as they seem. For example, groups of dolphins have been observed murdering baby porpoises for fun—or perhaps as practice for killing their own offspring later in life. Gangs of bottlenose dolphins have been known to isolate a female dolphin and force her to copulate with them for more than several weeks at a stretch. Dolphins will also attack humans—in Ireland, four people have been hospitalized because of a particularly feisty bottlenose dolphin.

“Dolphin rape” is a scary and catchy headline, but it isn’t exactly what dolphins are doing when they get sexually aggressive towards humans. Justin Gregg, a dolphin expert with a PhD in dolphin social cognition, claims that dolphin socio-sexual behavior should never be called “rape” because it trivializes real rape. However, male dolphins have been recorded acting sexually aggressive toward humans. In 2012, an underwater cameraman recorded a dolphin pushing another diver down to the ocean floor and mounting him. But don’t worry, tales about kind and gentle dolphins are still around. Every few years, we get an uplifting story about dolphins saving humans from sharks. 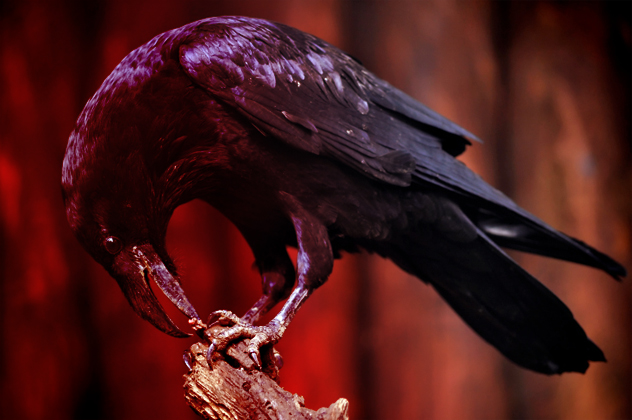 Crows are intelligent creatures. They use tools creatively, have actual common sense, and if you wrong one, he or she will remember your face forevermore. Seattle researchers studied banded crows and found out that they would never forget a human who caused them harm. The researchers found that even after years of not seeing a “dangerous” human, the crows will instantly react upon seeing them. At first, crows will scold the human and call for other crows to join the scolding. Then they will gather into flocks of over 30 crows and dive-bomb the person. Maybe a group of crows is called a murder for a reason.

Additionally, crows will tell other crows about a dangerous face. Crows who haven’t seen a particularly bothersome person will still react to one, and this knowledge can spread to flocks a mile or more away from where the negative experience first occurred. Their memories of dangerous people can last a lifetime. Of course, this means that scientists have to be careful if they capture and study crows, because the crows will never forgive them.

Kristance is a freelance writer, editor, and researcher. When she’s not compulsively traveling the globe, she’s making awkward YouTube videos. An avid culture geek, she’s a trained anthropologist and archaeologist. Connect with her on Twitter @diggingtoroam, find her most recent articles on her website, and read about her adventures at Digging to Roam.