Animal culling happens for a variety of legitimate reasons. When it is backed by science and carried out in a humane manner, it can protect the welfare of both animals and humans from greater threats. Yet when science is replaced by public hysteria, and humane killing by bizarre plots, the endgame can mean everyone loses. 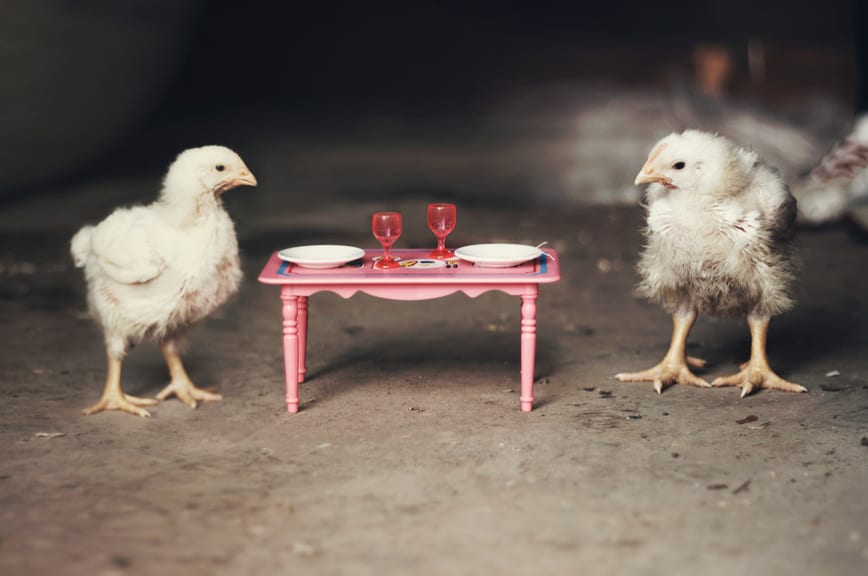 It only takes one rooster to tend to several hens, but roughly half of chicken eggs that come to term are male. Common sense would say that the males are butchered, but chickens used for meat are a different variety than those used to lay eggs. Males of the egg-laying type are too lean to be sold in supermarkets for meat, so they have no value in the chicken industry.

Like any kind of waste, they are disposed of. Usually in their first few hours of life. They can be suffocated in plastic bags, electrocuted, but more likely they are macerated and ground up while still alive. Grinding male chicks is actually recommended as the humane way to dispose of them, since the grinding is near-instant. Zipping through a high-speed grinder is presumably less painful than being slowly suffocated.

Naturally, animal rights group still take issue with grinding billions of baby animals alive, no matter at what speed. The chicken industry also has a problem with it too, albeit for entirely different reasons—it’s expensive. They would sooner avoid wasting money.

To this end, researchers are finding ways to determine if an embryo is male or female while the egg is still viable for sale. This would save billions of baby chicks from the grinder, and potentially billions of dollars.[1] 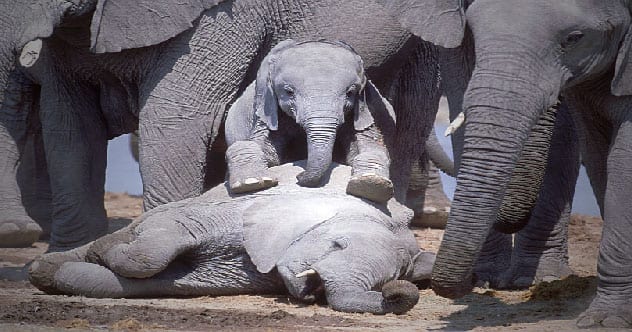 Not all culling is for humans’ benefit. African wildlife conservationists sometimes kill endangered animals as a means of maintaining the stability of an ecosystem. They aren’t concerned with only one species of animal, after all, but the biodiversity of the entire park.

A large predator population means competition for limited resources. Lions, for example, will kill other species of big cats that are even more vulnerable. Even prey may need to be depopulated. Kruger National Park had to cull many of its hippos after a drought left the population with tool little food to survive.

Still, research suggests that culling should be an option of last resort. Historic elephant culls left survivors without older elephants to teach younger generations typical behaviors like recognizing hierarchy and responding to threats. It even gave them the elephant equivalent of shell shock.[2]

8 Denver Has Enough of Goose Poop 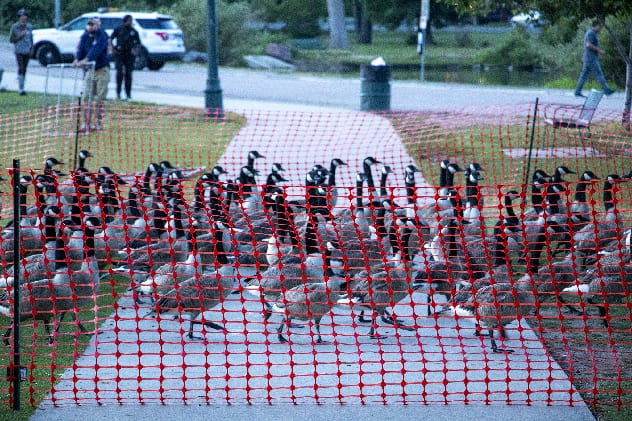 Canadian geese flying overhead is a common sight in some parts of the world, as is the feces they leave behind. A single goose creates about a pound of poop per day. Aside from the nuisance it creates, and the effort required to clean it, their feces contaminates waterways and can cause disease. Eventually, Denver, Colorado’s Parks and Recreation Department had enough of it.

So they culled them. During the geeses’ early-summer molting season, they are flightless, so it’s easy for contracted federal employees to corral and load them into crates. The geese are then slaughtered, butchered, and sent to food pantries where they can be eaten by those in need. Although it’s a tough kind of meat that requires long cooking times, goose meat was once called the “roast beef of the skies.”[3] 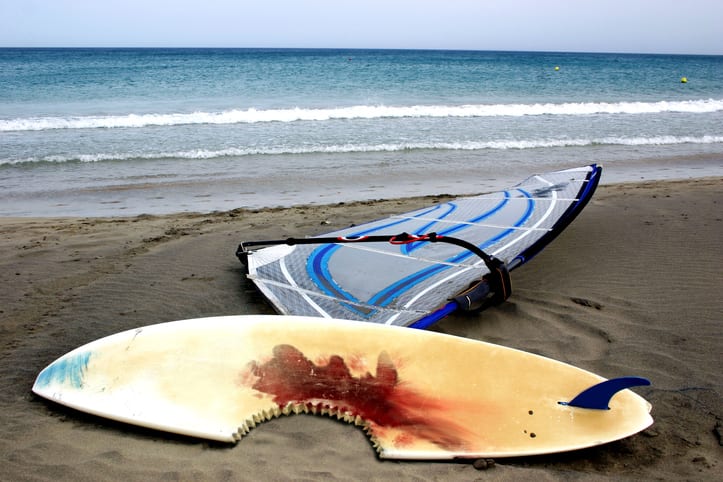 A series of fatal shark bites in Western Australia prompted the government to protect its beach-goers with drum lines set out to cull great whites, which were responsible for the majority of fatalities. But drum lines don’t discriminate, and the program was controversial because researchers feared they would harm the region’s biodiversity by ensnaring other fish.

The drum lines captured 172 sharks, with 68 meeting the criteria for culling. Out off all the sharks, however, none were actually great whites. 94% were tiger sharks that have not been responsible for a Western Australian fatality since before 1930. Nevertheless, they were still killed.

The culling prompted the Australian Environmental Protection Agency call things off, stating there was “scientific uncertainty” about killing a population of sharks that had nothing to do with the fatalities that prompted the cull in the first place.[4] 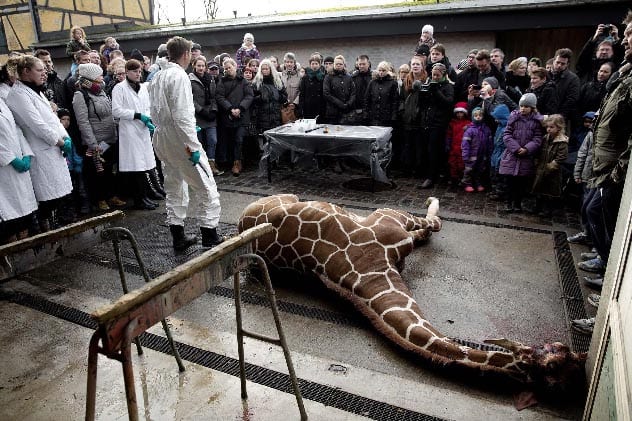 Marius the giraffe was the victim of an international breeding program designed to expand the giraffe population in zoos. The program was so successful that Marius’ genetic material was no longer of value to any zoo in the program. Letting Marius breed with any one of the program’s giraffes would have caused inbreeding in the population, so Marius was declared valueless and destined for, quite literally, the chopping block.

The decision to cull Marius just because he was of no value to a breeding program naturally caused an uproar. The zoo had allowed him to be born and live on its grounds, but when he was no longer useful, they decided to kill him.

The option of sterilizing him came up, but the zoo said that he would still take up resources that could be used to support viable genetic breeders. Other zoos offered to take Marius in, but the Copenhagen zoo would only share its giraffes with zoos that adhered to certain guidelines in its breeding program. It denied all offers.

So, without any use for Marius, and after refusing to relocate him, the zoo killed him. An autopsy and dismemberment was performed in front of an audience, one that included children. Afterwards, parts of Marius were saved for research while others were fed to the zoo’s carnivores.

Regarding all the outrage, an official said that they did not understand it.[5] 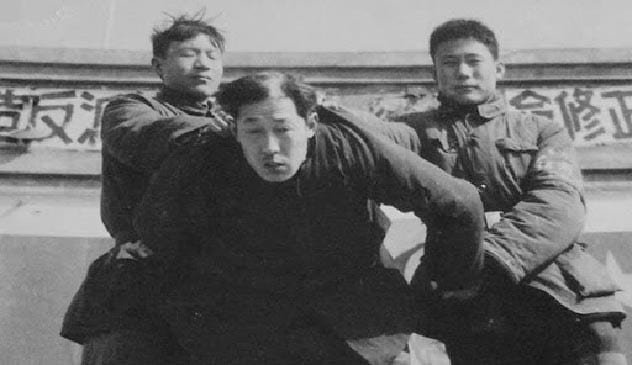 When China’s communist government rose to power in 1949, disease was running rampant throughout the country. It began a vaccines and sanitation campaign that included eliminating the animal carriers of the diseases. It was called the The Four Pests Campaign because it focused on the culling of mosquitoes, flies, rats, and sparrows.

Millions of kilograms of flies and mosquitoes were eliminated, as well as an estimated 1.5 billion rats. By all accounts the campaign was a roaring success, until people realized the ecological disaster that culling 1 billion sparrows created in the countryside. Sparrows were carriers of disease, but they also played a vital role in the ecosystem. Eliminating so many of them left a gaping hole in China’s food chain that had dire consequences.

China had been implementing the Great Leap Forward, where people were ordered to stop agricultural work and begin creating steel. But ignoring agricultural production meant that people did not have enough food. Starvation was already widespread at the time of the Four Pests Campaign, and the elimination of sparrows meant that insects like locusts exploded in population. This devastated what grain was still left after the government’s industrialization campaign. Millions died in what became known as the Great Famine of China.[6]

After WWI, Australian soldiers returned home to government-subsidized plots of land they were given to raise wheat and sheep. Unfortunately, some of the land they were given was difficult to actually raise anything on. This, coupled with the start of the Great Depression, made life difficult for the inexperienced farmers.

Then there were the emus.

The thousands strong population of emus did not leave when the soldiers-turned-farmers took over their land. They stayed, and started to eat their crop, which further devastated the struggling farmers’ livelihood. Once protected animals, the emus were reclassified as pests to be eliminated. The government wanted them dead so badly they paid hunters bounties for each emu they brought in.

Emus are resilient birds, though. Despite the culling, they maintained their numbers. The farmers did not have the resources to kill so many birds, so the Australian government brought in the army to begin the Great Emu War.

The army hunted them with machine guns, but the emus scattered so far the soldiers only ever succeeded in killing a few hundred out of thousands. The army tried again and again to mount military campaigns against the birds, but in the end, the emus won the war.

The army eventually just gave up and gave the ammunition to the farmers. Now, properly supplied, the farmers (who, we will remind you, were war veterans) succeeded in culling nearly 60,000 in half a year.[7] 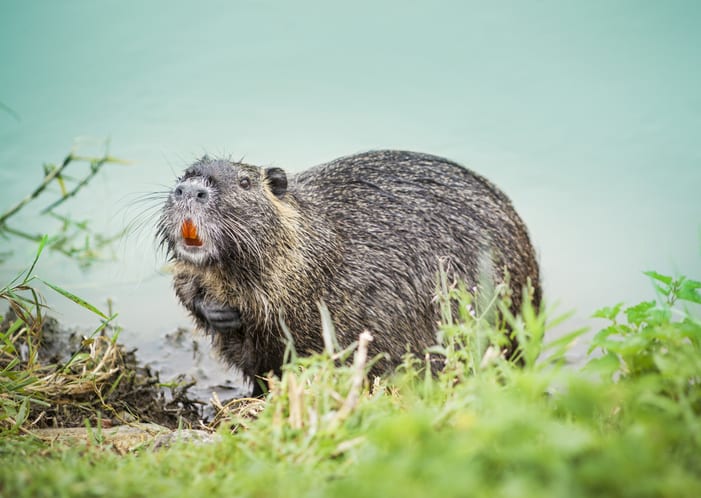 Nutria, also known as coypu, are an invasive species of rodent on almost every continent. The are native to South America, but international trading and breeding farms saw them spread all over the world. Eventually, some either escaped or were released into the wild, where they bred and spread.

One researcher in Korea came up with a particularly novel idea to be rid of the rodents. He suggested that they capture several nutria and sew their anuses shut. This would stress them, he said, which would cause them to eat their babies. He had once used this very same technique when he worked for a zoo with rat problems. Apparently, sewing their anuses shut had eliminated every single one of the pests.

Despite the technique’s apparent success, animal rights groups took issue with it. They said that causing the animal enough pain to drive it to cannibalism is unethical and constitutes abuse. Unsurprisingly, the researcher’s suggestion fell on deaf ears and his plan was never instituted.[8] 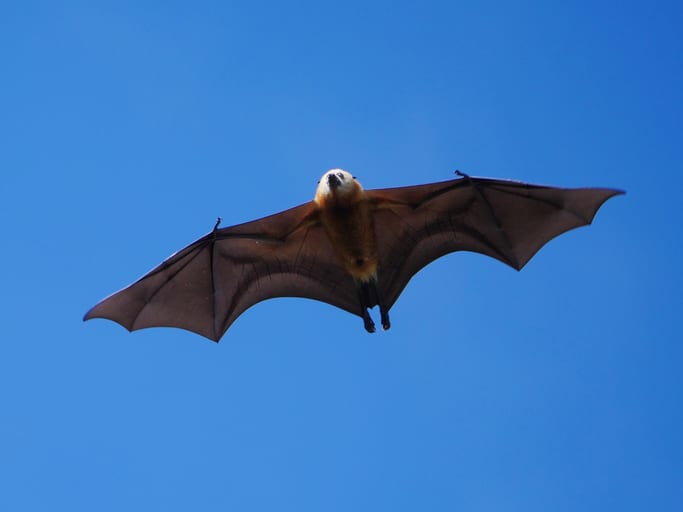 The Mauritius flying fox is classified as an endangered animal. Since 2015, the government has culled more than half of its population in order to make life easier for plantation owners. The foxes caused around 10% of the loss growers of mangos and lychees suffer each year, so a cull was implemented to stem losses.

The result was a decrease in yearly yield. Ecologists say that the flying fox is an important pollinator for more than half of the island’s flora. Moreover, when the government instituted its cull, it quickly found that shooting the bats that were eating fruit on plantations was extremely difficult, so the hunters went into the mountains and killed them in their native habitat. The flying fox, however, tends to stick to one area, so killing the ones in the mountains meant that they were not actually doing anything to address the loss of the plantation fruit. Some conservationists claim that the government is simply keeping the culling going in order to win votes instead of actually fixing the problem. Conservationists filed a lawsuit against the Mauritius government to halt the culls.[9] 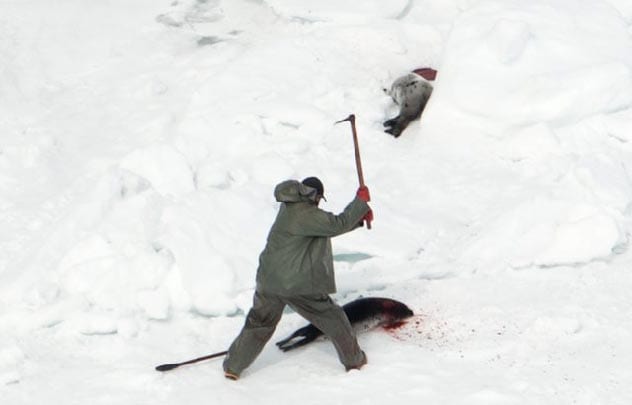 The Canadian Seal hunt is an annual and extremely controversial event where tens of thousands of seals are hunted for meat, fur, other products, and, some say, population control. But many countries around the world have banned seal products imported from Canada. This helped lead to such an extreme decrease in demand that anti-hunting activists say profits from the hunt are now almost twice as less than what the government spends to monitor it. The Canadian government, however, says that the hunt has other indirect economic benefits and still supports the cull.

One group that claims they do not see these economic benefits is the Inuit. The native peoples of Canada hunt seals as a part of their ancient culture and for survival. International bans on seal products exempt the Inuits, but the demand has plummeted due to the contempt the government-sponsored hunt has brought.

Some are now saying that an expansion of the hunt is necessary in order to protect the local salmon population, since salmon are the prey of seals. Scientists disagree, saying that the seals are only being used as a scapegoat. Regardless, the seal hunt is important to the survival of certain Canadian communities. But opponents argue that if the Canadian government stopped subsidizing it, the free market would let it go extinct as an unsustainable business.[10]

For more lists like this, check out 10 Animals With Cannibalistic Sex Habits, and 10 Ageless Animals That Do Not Grow Old.

About The Author: Mike spends his free time at the beach enjoying the sun.