In 2022, cannibalism became a popular subject again for mass media purposes. First, there was the 2022 three-part series House of Hammer about disgraced actor Armie Hammer who was accused of sexual abuse and cannibalistic fantasies. Then there were shows like Monster: The Jeffrey Dahmer Story and Yellowjackets as well as the movies Fresh and Bones and All.

Cannibalism is nothing new, though. Shakespeare even tackled the subject in Titus Andronicus. By and large, cannibalism involves one adult eating another. However, there’s a long, dark, and forgotten corner of history about cannibals eating children. This article examines some of the most terrifying cases from the medieval ages about filial cannibalism or the cannibalism of children.

Odoric of Pordenone is a Franciscan friar who lived from 1286 to 1331 and documented his travels during the 14th century. Odoric’s reports were subsequently popularized and even later plagiarized by Sir John Mandeville, who is likely to have never left his abbey or dispensary.

The Travels of Sir John Mandeville are how great minds like Columbus, da Vinci, and Shakespeare first learned about the wonders of the ancient East.

One of the many places that Odoric visited was Lamuri, a kingdom in northern Indonesia that lasted until the beginning of the 16th century. The area is believed to be one of the earliest places where Islam arrived in the Indonesian archipelago.

During Odoric’s travels, he passed through Lamuri, which is derived from the medieval Arabic word for the area of Sumatra, where the population traded. The populace of Lamuri walked around without clothing and made fun of Odoric for his clothes. The people of Lamuri also did not believe in marriage, sharing all women among each other. Odoric, however, noted that the people of Lamuri had one “wicked habit”: children were bought if adequately “plump” or reared until they were bigger. The people of Lamuri commented to Odoric that child flesh was the “sweetest meat in the world.”[1]

9 The Siege of Ma’arra

The Siege of Ma’arra occurred in late 1098 in what is now Syria during the First Crusade. After capturing Antioch, Crusaders moved to the south and began raiding and pillaging each town they found, which is where they encountered the city of Ma’arra on December 11, 1098. It was a peaceful city whose economy was based on the growth of olives, figs, and grapes. Ma’arra was subsequently devastated by the Crusaders, who killed thousands of people.

But Ma’arra was also the site of cannibalism. Radulph of Caen, who chronicled the genocide, observed that adults classified as pagans were boiled in pots while children were impaled on spits, then grilled and eaten. Fulcher of Chartres, another observer at the time, wrote that the Crusaders, driven by hunger, removed the buttocks from corpses found in the city, which they then cooked and ate mostly rare.[2]

The Waldenses began as a Christianity movement in France during the late 1170s. The group was named after its founder, Peter Waldo, who was a wealthy Lyon merchant. Waldo had heard a troubadour sing about St. Alexius, the patron saint of beggars and pilgrims. This song, combined with the loss that Waldo experienced at the sudden death of his friend, led him to believe that all his belongings were worthless. This led him to give away his property to the poor and begin street preaching.

On April 24, 1655, a signal for a massacre was given, known as the Piedmont Easter. Writer Peter Liegé observed that children were separated from their mothers, clasped by their feet, and smashed against rocks or held between two soldiers and torn apart. During the Piedmont Easter, troops also cooked the arms and legs of people, including children. Other people were roasted alive.[3]

The Ming Dynasty ruled China from 1368 to 1644, during which time China’s population increased substantially. The Ming Dynasty is remembered for expanding trade, creating long-lasting drama and literature, and making porcelain.

The Ming Dynasty popularized a practice that had become popular during the earlier Tang Dynasty. In the 700s, a physician, Ch’en Tsang-ch’I, became the first Chinese doctor on record to prescribe human flesh for various ailments. Three requirements were necessary before the good doctor prescribed human flesh. First, the act must be voluntary—the donor had to donate parts of themselves for this intended purpose. Second, the donor and the recipient needed to bear a close relationship, which often meant that the donor was a child or child-in-law. And finally, the recipient could not know they were consuming human flesh, so the flesh was disguised in ordinary food.[4]

The Great European Famine: The First Catastrophe of the 14th Century

In the 14th century, cold weather and famine in England led to the Great Famine of 1315 to 1322. Before the cold came, Europe pushed itself to the limits of its resources. Four centuries of mild temperature led the country’s farmers to grow crops on vast quantities of land that were previously not suitable for agriculture. This led to an increased food supply which led to a population explosion and tripled the number of people in Europe. When these lands stopped being able to produce food due to frosts and floods, millions of extra mouths needed to be fed. This led to civil wars and rebellions. Two harvest failures in 1314 and 1315 turned into years of famine.

While all of Europe was hit, Europe’s towns were where the Great Famine hit the worst. Corpses piled up in streets, bodies were flung into open pits, and countless stories abound of cannibalism and child abandonment. The cannibalism of children was so common during this time that the folk tale “Hansel and Gretel” was created.[5] 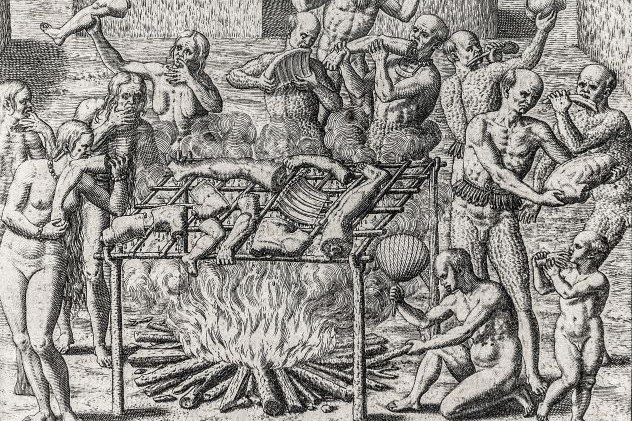 The Tupinambá are a group of South American Indians who speak the Tupian language and live on the eastern coast of Brazil. In the past, the group lived in villages that ranged in size from 400 to 1,600 people who supported themselves by farming and fishing in the ocean. War among the Tupinambá was a common occurrence. The group was focused on war and is alleged to have practiced cannibalism.

Manuel de Nóbrega was a Jesuit priest who lived from 1517 to 1570 and founded the Jesuit mission in Brazil. Nóbrega wrote in his book Reports on the Lands of Brazil that the Tupinambá only waged war out of hatred for the enemy. Nóbrega wrote that the Tupinambá fought one another and that when enemies were captured, they were kept as prisoners. At the same time, their daughters were taken as wives, and the prisoners were then killed with great celebration. They smoked corpses in the fire and then ate them. If the enemies left children, these were eaten too.[6] 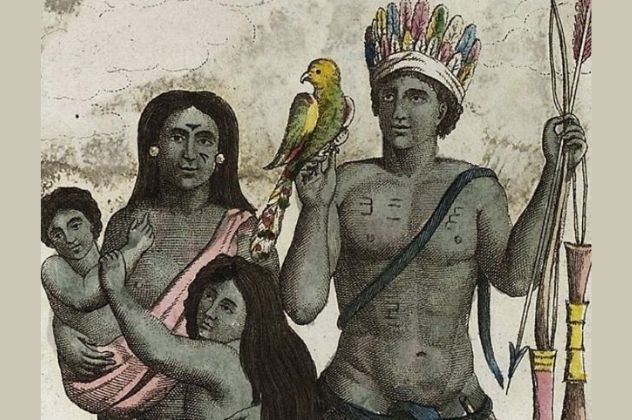 The Caribs are indigenous people on the northern coast of South America. Today, the Caribs live in villages along the shores of Venezuela, Brazil, Guyana, and French Guiana and speak a language called Carib. Christopher Columbus was the first to report on cannibalism among the Caribs. Amerigo Vespucci wrote that the Caribs ate little meat except that which came from humans and that the Caribs ate all of their enemies, whether man or woman.

Observing the Caribs, Padre Augustin de Frias wrote that the Caribs from the Guarapiche/Guanipa area chose to eat young children instead of prisoners. The Caribs in this area also practiced a form of euthanasia in which the elderly were eaten so they would not have to face a lingering death. Some historians argue that these practices were merely the result of propaganda against Indigenous people, though, who resisted the Spanish.[7]

A Brief History Of Human Sacrifice: The Aztecs

The Aztecs began sacrificing humans in the early fourteenth century. At first, sacrifices were uncommon but grew in number as time passed and the empire expanded. The Aztec sacrifice of humans was inspired by the idea that the human body contained energy that kept the sun in motion through the sky and subsequently renewed time, crops, and human lives.

During Aztec sacrifices, human hearts were offered to the sun, and blood was smeared on the walls to make sure Aztec temples were coated with energy. In addition to men and women, children were sacrificed too in the first quarter of the Aztec year. Children were purchased from their parents specifically to be sacrificed. Hernando Cortes’s man allegedly came across roasted babies, which the Aztecs carried as provisions but abandoned when they noticed the Spaniards.[8]

The Korowai tribe of Papa New Guinea practices a type of revenge cannibalism that impacts children. The Korowai were in full swing during the Middle Ages and, for centuries, have believed in sorcery, witchcraft, and revenge on a widespread social level. Abnormal behavior among the Korowai can lead a person to be accused of participating in sorcery. Additionally, because the culture has had no breakthroughs regarding medicine and health, they have their own methods for explaining sicknesses.

Before someone passes away in the Korowai tribe, they might claim that they know who the sorcerer is. This might lead to a child being named. After the person’s death, the alleged sorcerer is then found, made to stand in a clearing, shot with arrows, cooked, and eaten. The alleged sorcerer’s body is then dismembered and placed on branches to warn others.[9]

China’s An Lushan Rebellion started in 755. The following year, the rebel Yan army had control of most of northern China. In 757, emperor An Qinxu ordered general Yin Ziqi to take control of Suiyang (which is the current day site of Shangqiu, Henan) because the city was situated between two major ones. Yin Ziqi’s 130,000-man army then took control of Suiyang while fighting against Zhang Xun and the Xu Yuan army of around 6,800 men.

Through clever tactics, Zhang Xun was able to kill around 5,000 Yan troops at first. Zhang Xun then killed general Yin Ziqi, which greatly disorganized the Yan army. In 16 days, the Yan army had lost around 20,000 men, which led Yin Ziqi to order a retreat. Yin Ziqi returned to take Suiyang later with 20,000 new men. The Xu Yuan and Zhang Xun had prepared for the battle by storing food inside the city of Suiyang. This was lessened when it was shared with neighboring kingdoms. Soldiers received very small rations. Zhang Xun was soon left fighting 1,600 soldiers who were starving and sick. The soldiers grew further desperate without outside help. Before long, Zhang Xun’s men were eating tree bark, tea leaves, and paper.

The dwellers of Suiyang during this time traded their children to eat and cook corpses. Zhang Xun even killed his concubine in front of his soldier and proceeded to cook and consume her flesh. When the woman was eaten, the troops ate the old and young. Before long, there were no more people to eat. Eventually, Suiyang fell to the rebels, and Zhang Xun was captured.[10]