The varied and unusual things we’ve designed to cover our faces throughout the years are astonishing and more than a little strange. Stare at images of these masks long enough and you’re bound to get the heebie-jeebies. 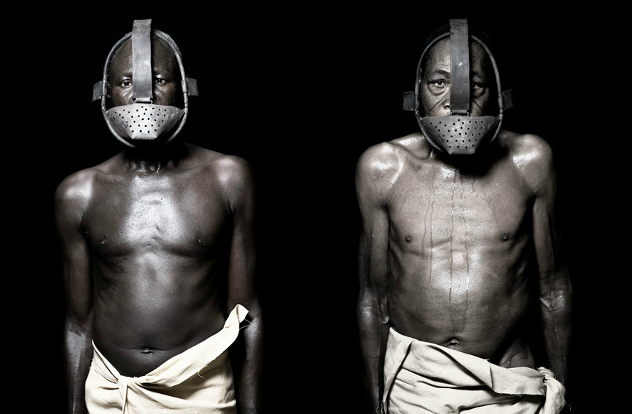 Dirt eating (geophagy) was relatively common among slaves in the 16th–19th centuries. Many had picked up the habit in West Africa, where geophagy was so widespread that favored varieties of dirt were even gathered and traded. Slave owners supposed this practice was unhealthy and were told by physicians that it would give their slaves depression, stomachaches, dropsy, poor appetite, shortness of breath, and vertigo. So, in an attempt to protect their “property,” slave owners outfitted the dirt-eaters with disturbing, mouth-blocking masks that they had to wear even while laboring in humid, dangerously hot conditions.

Turns out, there’s no real consensus on whether or not moderate geophagy is harmful. So, this so-called “cure” was nothing but torture. (These masks may also have been designed to prevent slaves from consuming the crops they harvested.) 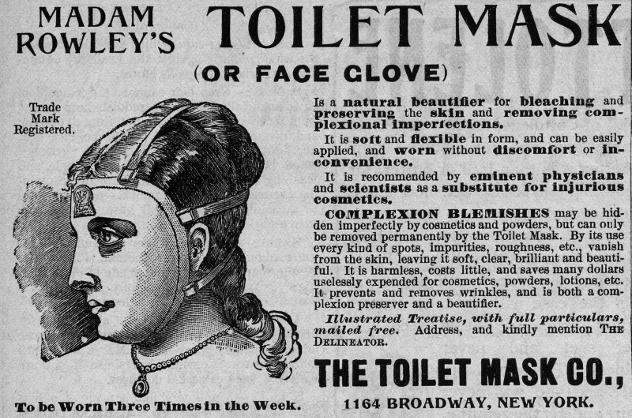 Other than peddling false hope, there’s nothing inherently sinister about this mask. Still, it has a Hannibal Lecter–like appearance that definitely brings out the creep factor.

Madame Rowley’s “Toilet Mask” was a beauty treatment in the 1890s that promised to beautify, bleach, and preserve the complexion of the wearer. Madame Rowley thought there was real science behind her invention and even had it patented. According to the patent, users were to put the mask on while they slept and allow perspiration to “soften and clarify the skin by relieving the pores and the superficial circulation.” To us, it seems like a good way to get a pruney face and possibly develop a skin fungus. 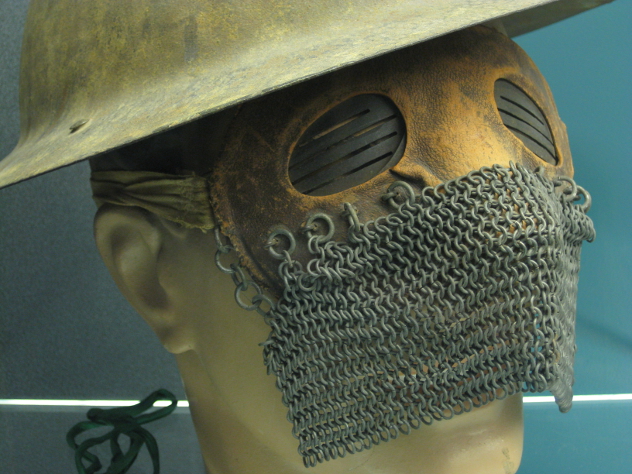 Although these masks look like some type of medieval torture device, they were actually worn for protection by British tank operators at the 1917 Battle of Cambrai in World War I (one of the first major tank battles in history).

Back then, tank engineering was in its infancy, and the vehicles weren’t nearly as formidable as they are today. They only moved about as fast as a person could walk, broke down constantly, and could be destroyed with heavy artillery. This meant anyone inside the tank was highly susceptible to gunfire, fiery shards of metal, and other shrapnel. Even under light fire, the tank would spit rivets and chips of lead paint at the occupants’ faces. The leather and chainmail masks served as the face’s last line of defense against this barrage of bullets and explosions.

Incidentally, the Germans were at first highly intimidated by the enormous tanks and, undoubtedly, the masked drivers. But, after seeing how ineffective the tanks were, the Germans ridiculed them and so didn’t develop their own tanks until much later in the war. 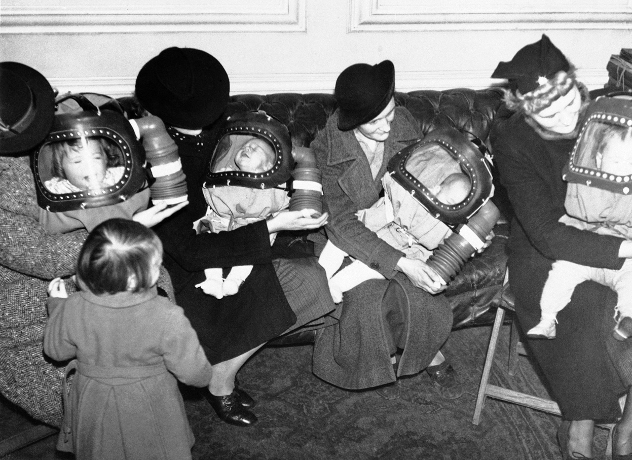 While gas masks on adults are creepy enough, they’re nowhere near as eerie as baby gas masks. In fact, the World War I and II baby versions looked more like helmets, which gave the infants a scuba-diving alien appearance. Not to mention, it’s just depressing we live in a world where babies actually need gas masks. If these things look incredibly cumbersome, that’s because they were. For the device to work, an adult had to continually push the manual air pump—something that seems like it would be difficult to do in a state of emergency.

In the US, children were given Mickey Mouse gas masks. Although these masks were supposed to be less scary for kids, they are arguably more nightmarish than the regular versions. We just imagine a gang of children wearing these and staring us down with their blank, glass eyes.

In addition to masks suited for every man, woman, and child, there were also versions for Fido. Yes, even dogs had to be ready to go into battle under any circumstances. Plus, having a complete set of human and pet masks made for some pretty cool family photos. 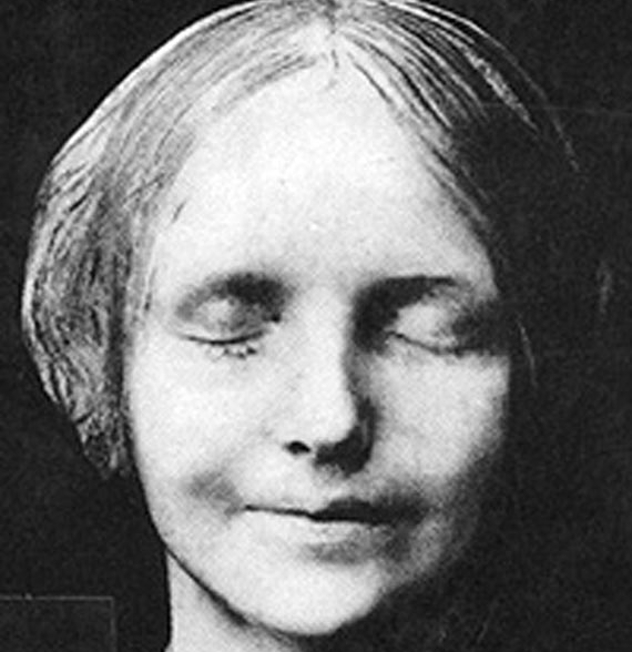 Maybe it’s the fact that the plaster once encased a dead person’s head or that we’re viewing the expression of a lifeless face, but whatever the reason, death masks are downright freaky—yet, they have been quite popular throughout history. The practice of making death masks has been around since ancient times and was common well into the 20th century. People used them as models for sculpting, for forensic purposes, for religious ceremonies, and simply as mementos. Generally, physicians were in charge of creating the casts, and they made sure to do so within the first few hours of a person’s death (before bloating and rigor mortis set in).

Thanks to these doctors who embraced the macabre, we can now see the deathbed faces of Napoleon, President Lincoln, Mary Queen of Scots, Beethoven, and many other historical figures. Possibly the most viewed mask is of L’Inconnue de la Seine, an unidentified woman who was pulled out of the River Seine in the 1880s (she was presumed to have drowned). Her death mask became a popular decoration in upper-class French drawing rooms and was later used as a model for the face of CPR dummy “Resusci Anne.” Consequently, countless people have unknowingly given mouth-to-mouth to the image of a dead French woman.

It’s fitting that the unknown drowning victim has saved innumerable others from the same fate. 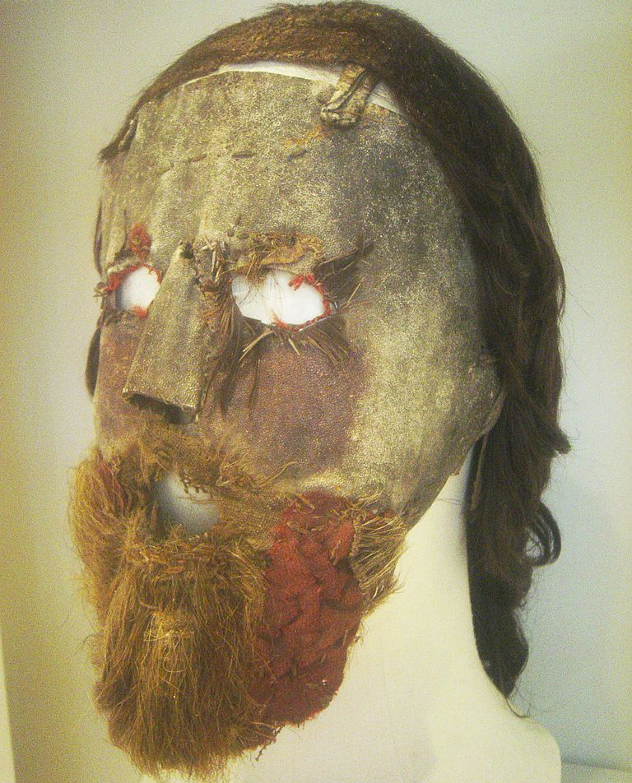 In 1663, Presbyterian minister Alexander Peden found himself on the run from the Scottish government. What did the good minister do to get on the wrong side of the law? Well, he refused to quit preaching when King Charles II abolished Presbyterianism and insisted that government-sanctioned Episcopalian bishops had to approve all ministers. Instead of following the law and supporting the King’s move towards “Scottish Restoration,” Peden sermonized in private houses, fields, and other secret locations. Such behavior was considered seditious, and Peden soon became one of Scotland’s most wanted men.

To avoid capture, Peden hatched a plan that now seems utterly ridiculous, but surprisingly, actually worked—at least, for a little while. The plan consisted of hiding his well-known face behind a fabric mask adorned with a red beard, wig, wooden teeth, and feathers around the eye slits (eyelashes, maybe?) Perhaps the most surprising element of this story is that his followers apparently didn’t mind getting religious teaching from someone who looked more like a demon than a prophet. Peden continued preaching in this horrifying getup until he was finally captured in 1673. He then spent over a decade in various prisons, was banished to America, and eventually made his way back to Scotland where he died in hiding. 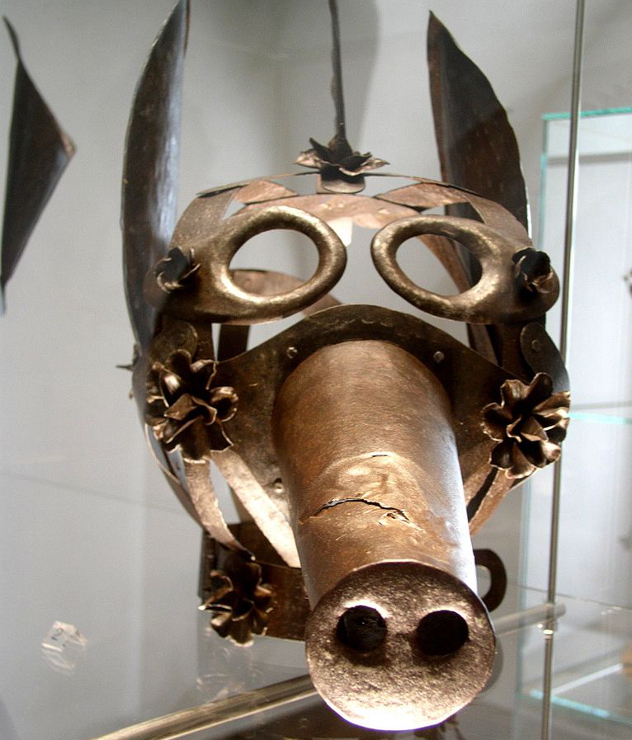 Schandmaskes (or “shame masks“) were a German form of punishment used in the 17th and 18th centuries. It’s hard to judge whether they’re more peculiar or creepy, but they definitely evoke an eerie feeling when you find out people were forced to wear them for merely violating trivial social rules, such as gossiping, telling dirty jokes, or some other social faux pas. While the heavy, iron mask was certainly tortuous, the main point of the practice was to humiliate the offender as much as possible. Consequently, the masks were often made to look or sound silly and give folks an idea of the individual’s sin. For instance, some had donkey ears to signify a fool, long tongues to represent a gossiper, or giant pig noses to indicate the person was “dirty.” Some even made whistling sounds every time the wearer exhaled—much to the amusement of onlookers.

On top of that, the criminal was then pushed into the stocks where they were subjected to the taunts, jeers, and possibly rotten tomatoes of passersby. Some of the masks also had an iron bit, which pressed uncomfortably down on the tongue of the offender. Before being practiced in Germany, it seems this particular form of abuse was inspired by the British “scold’s bridle,” a similar form of punishment mostly used on women. 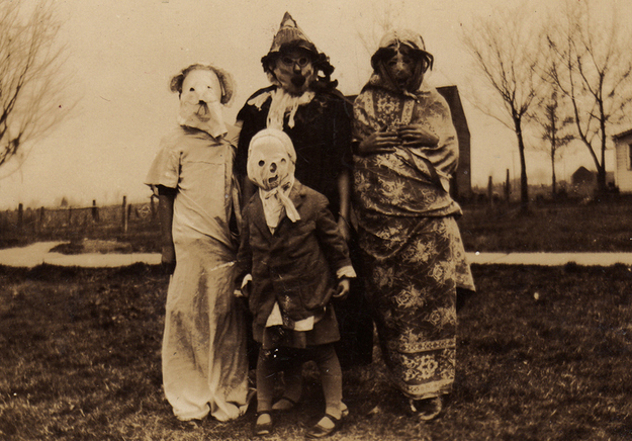 Nowadays, Halloween masks are mostly superheroes or old presidents, and even the so-called scary ones are latex, mass-produced, and somewhat . . . predictable. To see the truly horrifying masks, we need to look back 70 to 100 years ago when folks had to make their own costumes using only their imaginations and whatever stuff they had lying around. What they ended up with were a bunch of fabric and papier-mache masks, which were so asymmetrical and primitive that even the “cute” ones are completely disturbing to look at today.

Besides the fact that we’re looking at faded, black-and-white images, these masks are creepier because most people back then still remembered that Halloween costumes are meant to be a bit frightening (sorry, sexy nurses). After all, their purpose is to confuse and ward off the undead wandering the Earth. 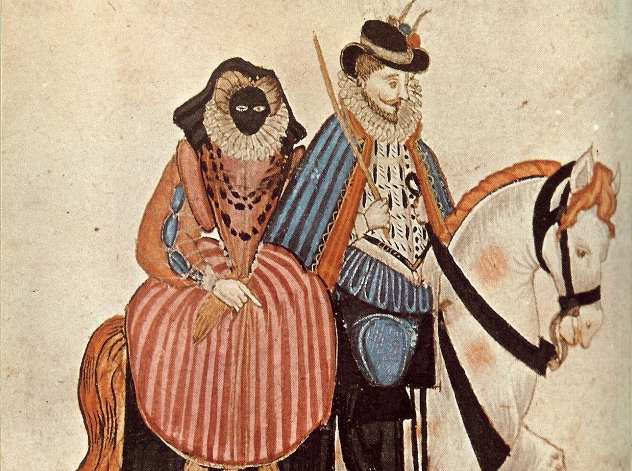 If you were a woman in the 16th century, it was perfectly acceptable to go around town with a ghoulish black mask covering your entire face. These velvet masks, called “visards,” were multipurpose, as they served to both protect the woman’s skin from the sun and give her an air of mystery. Behind the mouth slit, there was a small bead that the woman would bite to hold the mask in place—effectively making her faceless and mute.

While some might have found the effect intriguing, Phillip Stubbes, an author at the time, described it by saying that if a man happened to meet one of these black-masked women, “he would think he met a monster or a devil; for face he can see none, but two brode holes against her eyes with glasses in them.”

We tend to agree with Stubbes.

These masks fell out of fashion during the 17th century when the style became associated with prostitutes. (Maybe men did find the masks alluring.) 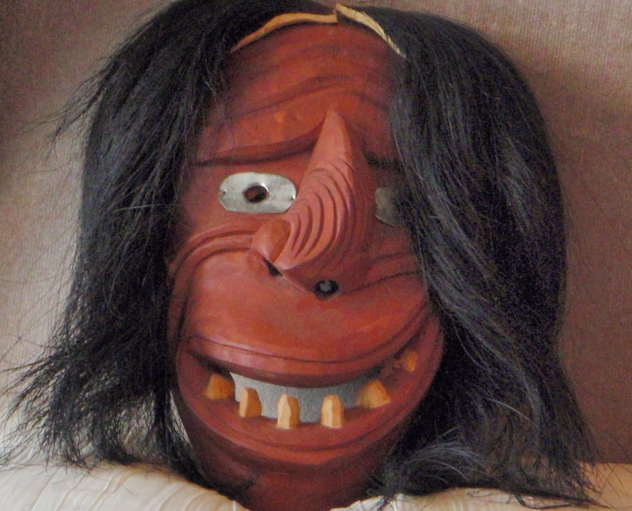 Pretty much every indigenous culture has its share of religious or ritualistic masks, and, from an outside perspective, most of them are simultaneously fascinating and a bit frightening. Yet none are more intimidating than the deliberately grotesque, crooked-mouthed masks worn by the False Face Society, one of the many medicinal groups within the Iroquois tribes. This society is used as a sort of last resort when none of the other healing societies can cure a patient.

What makes these masks more unnerving than other tribal masks is they are not mere wooden carvings but are considered to be the living embodiment of a spirit. As such, there is a strict protocol in how to care for these wooden “bodies.” This includes occasionally anointing the masks with oil and animal grease, feeding them white corn mush, and burning tobacco in their honor.

Things get really exciting when the masks are put into action. Although the ceremonies are sacred and non-society members aren’t readily invited, it’s said the healers don the masks and then perform violent pantomimes of demons being expelled from the patient’s body.