Nature has a way of making us realize how incredibly small we are in the grand scheme of things. The closer we look, the more we realize that some of the scientific principles we take for granted can act in amazingly bizarre ways. It’s even better when we can capture these instances in photos and videos. Read on to see how water can run uphill and how frozen lakes are capable of shooting flames.

ORIGINAL Sunshine Coast Floods 27/1/2013 …..police get the surprise of a life time

Sea foam is created when marine water with a high concentration of organic matter is agitated, usually from breaking waves. This usually causes a thin line of foam on the waterline of the shore, but occasionally, the foam is produced in such large amounts that it breaks free of the water and invades dry land.

Sea foam can be created in large quantities for a few reasons, the most common of which are algal blooms. When massive amounts of autotrophs appear offshore, the resulting decayed algal matter can create foam as it is churned in the surf. Most of the time, this foam is harmless. As a matter of fact, sea foam is a good indicator of normalcy in the surrounding ocean ecosystem.

Sometimes, though, large amounts of sea foam can create a driving hazard. Certain blooms (like that of the dinoflagellate Karenia brevis) can even spread algal toxins that can irritate the eyes and respiratory systems of beachgoers while causing large die-offs of seabirds and other marine organisms.

Dendrites are crystals that form in a repeating pattern that gives them a tree-like appearance. In mineralogy, dendritic crystal formations are created whenever manganese- and iron-rich water flows along the fractures and bedding planes of various rock types. In chemistry, a dendrite is any crystal that branches into two parts during growth.

These fractal patterns give objects the appearance of an intricately made tree branch, and the imagery is made into an arguably more impressive winter aesthetic when it is made with ice.

With ice, these patterns are made when moisture from the surrounding atmosphere condenses almost instantaneously. The result is a series of patterns that will continue to repeat themselves until environmental conditions change. Dendritic ice crystal growth is similar to that of a living thing, with the crystal becoming infinitely more complex over time. 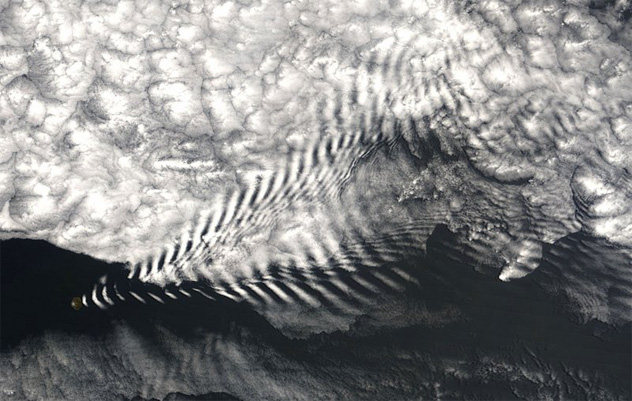 It turns out that islands can create waves of their own—in the sky. On the ocean, there is very little to disturb the path that the wind takes over the water. This means that things on or in the water—like people in boats—would experience much stronger winds than someone who is on land in the middle of a city, where numerous buildings, cars, trees, and other things might impede air flow.

When the strong air currents out on the open water are disrupted by an island in their path, the air will either disperse or take a path over the island, kind of like air traveling over your windshield and car roof while you’re driving. This new air path can create impressive waves in the clouds downwind of where the path was altered.

NASA was able to capture some great images of this phenomenon in the South Sandwich Islands in 2009.

Exploding lakes are natural phenomena that occur when unusually large amounts of either CO2 or methane gas are present in the water. During these “explosion” events, you can actually see the surface of the lake churning with bubbles as gas is released from the lake’s depths. This creates a dangerous cloud of gas that can be fatal to those around the lake. This phenomenon was unheard of until 1984, when a lake in Cameroon exploded and produced a cloud of gas that killed 37 people. Another Cameroonian lake exploded in 1986, killing about 1,700.

In this video, you can see huge amounts of flammable methane gas spewing from various frozen lakes around the world. Not only does this demonstrate how dangerous the lake would be if it thawed, but relieving the lake of its methane and burning it allows it to enter into the atmosphere as CO2. While CO2 is also a greenhouse gas, methane can trap up to 25 times as much heat, which means that these scientists are actually starting fires as a precautionary measure.

Asperatus clouds are a fairly new classification, having only been photographed in the last 30 years. These clouds give the sky the appearance of an ocean’s waves with their constant flowing motion, and although they appear menacing, they usually dissipate without any kind of a storm. Since they are such a recent discovery, scientists are unsure of the causes behind them. There are currently studies being done to gather evidence on what kinds of weather conditions are needed for asperatus clouds to appear.

Asperatus clouds occur most frequently in the Great Plains region of the United States. They are alternatively known as undulatus asperatus, because although their classification is currently up in the air, they are generally accepted as being most closely related to undulatus clouds. As of 2009, asperatus clouds have been proposed as a separate cloud classification. If this proposal is successful, asperatus clouds will be the first newly classified formation in over 50 years.

An ice shove, sometimes referred to as an ice tsunami, looks like what would happen if you watched a glacier move in fast-forward. These occur when strong ocean currents or winds allow ice and partially melted ice to accumulate on the edge of the water, and eventually begin advancing onto land.

Essentially, the ice travels through the same mechanism as an iceberg. While strong ocean currents allow icebergs to move through the water, strong winds can allow ice to overcome the friction of the land and begin to move. Witnesses have compared the sound of an ice shove to that of a train, thunder, and the sound of countless windows all breaking at once. The resulting ice movement is known to cause damage to the houses and trees closest to the body of water. In northern areas, including Canada, warnings of ice pileups are often given alongside flood warnings during the winter months.

An unusual phenomenon was recently recorded at the Kawah Ijen volcano in Indonesia. That is, people noticed that the lava streaming from the crater was an unusual, brilliant blue color.

The blue color isn’t really coming from the lava—it’s actually the result of sulfuric gas emerging from cracks in the volcano. When the highly pressurized gas meets the air, it combusts and some of the sulfur actually condenses into a liquid form and continues burning hot blue as it makes its lava-like descent down the slopes.

Although it is described infrequently, molten sulfur is actually a common occurrence around volcanic fumaroles. Sulfur’s melting point is low enough that the temperature around volcanic vents often exceeds it, and the flowing blue “lava” can be spotted in areas where this occurs.

Most people know that water evaporates when it gets warm. People who have had the experience of placing water on a hot cooking surface, though, may have noticed that when you get to a hot enough temperature, water will sit on the surface in droplet form and take much longer to evaporate. This phenomenon is called the Leidenfrost effect, and it can also cause liquid to move uphill, as seen in the video above where physicists at the University of Bath use the effect to creatively manipulate droplets of water.

When liquids come in contact with a surface that is much higher than their boiling point, an insulating vapor layer is created around the liquid. This layer keeps the liquid from directly touching the surface, and thus from boiling rapidly. This is aided by the fact that steam has poor thermal conductivity, meaning that the rate of heat transfer between the hot surface and a drop of water would be slowed dramatically.

A snow roller is a phenomenon where natural balls or cylinders of snow appear strewn about landscapes when snow of the right consistency, preferably in a hilly area, is sculpted by the wind. As wind blows the snow along the ground, it collects more material, and the wind crafts these snow rollers in the same way that we would create the segments of a snowman. Because of the precise conditions needed to witness nature’s version of a snowball, it is a very rare occurrence.

The National Weather Service has said that in order for snow rollers to form, snow directly on the ground must be stiff enough for new, falling snow to not stick to it. Then, the right combination of loose snow, high winds, and open lands can allow the snow rollers to form. Alternatively, snow that falls from trees located on a steep slope could become snow rollers by the simple means of gravity.

Pitch Lake, in Trinidad, is a pretty bizarre occurrence. It was discovered in 1595 and people immediately recognized the usefulness of the tar seeping from it, but surprisingly little research has been done on the lake and its origin. Some scientists believe that it is the cause of two faults meeting and forcing up oil from deep within the Earth, but no one knows for sure. Extended periods of contact with air at the surface would allow for the lighter elements of the oil to evaporate, leaving the asphalt behind.

The La Brea Pitch Lake is the largest pitch lake in the world, and as such, it is a great economic resource to the people of Trinidad and Tobago. Using asphalt from it, La Brea is able to make and export anti-corrosive black paint, insulating compounds, seam sealant, underbody coating for vehicles, and many other valuable products.

You can check out Andrew’s other writing over at Cracked, and you could also help him by checking out his music page here!