To quote a famous song on war, “What is it good for?—Absolutely nothing!” And we tend to agree with that. War is painful and destructive, and it brings out the worst of humanity. Yet amid the carnage, we can also find some of the most uplifting stories ever, be they tales of self-sacrifice and courage or other little-known, positive events. These stories serve to remind us that life is not as hopeless as we think it is.

10The POW Who Forgave His Torturer 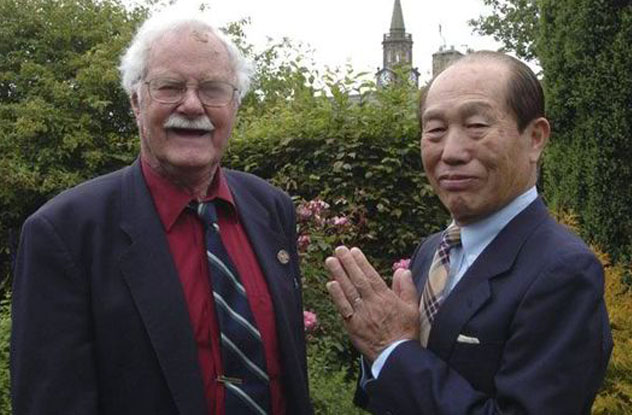 It would have been fairly easy for Eric Lomax to hate Takashi Nagase forever. The British officer had been captured in Singapore in 1942 during the Second World War and then sent to work on the infamous Burma-Siam Railway. During his time as a POW, Lomax suffered under the brutality of his Japanese captors, especially when they caught him with a makeshift radio and map.

Nagase stood out in Lomax’s mind; although the interpreter never laid a hand on him, his threats of death during the torture sessions haunted him for decades after the war. In fact, Lomax planned to kill Nagase when the two met again in Thailand in 1989. Instead, in a truly moving moment, Lomax forgave a repentant Nagase and realized that, just like him, the man suffered greatly during the war.

After the war ended, Nagase became a Buddhist, assisted the Allies in finding mass graves, and did whatever else he could to atone for his sins. He also built Buddhist temples and sponsored schools in Thailand and became a harsh critic of the Japanese military and imperial family.

For Eric Lomax, forgiving his tormentor relieved him greatly. As he put it, “sometime, the hating has to stop.”

9The Confederates Had A Massive Snowball Fight 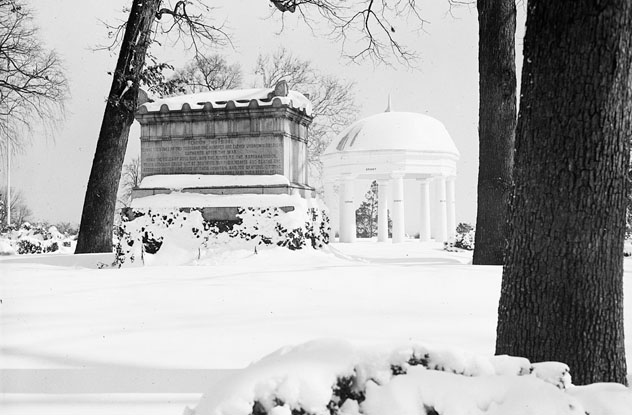 Truckloads of snow can turn even the most battle-hardened veterans into giddy 10-year-olds. Taking advantage of two particularly heavy snowfalls, the Confederates camping at Rappahannock Academy in the outskirts of Fredericksburg, Virginia fought a massive snowball fight among themselves in February 1863.

It began when the North Carolinians under General Hoke charged at the Georgians’ side of the camp and pelted them with snowballs. At this point, nearly every Confederate soldier (10,000 of them) joined in the fun, reinforcing the battered Georgians and forcing the attackers to retreat.

8Returning A Fallen Enemy’s Personal Effects To His Fiance 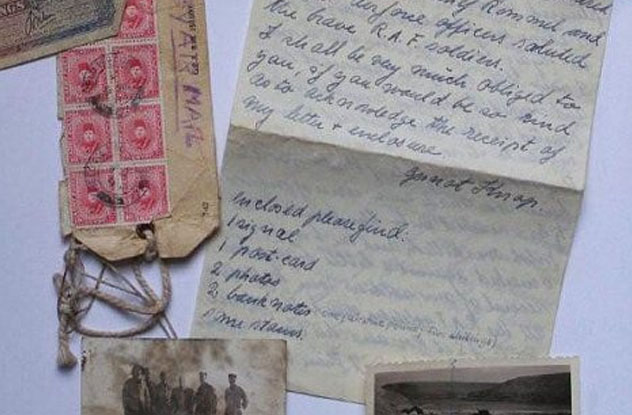 Unlike so many of his peers, Erwin Rommel—one of Germany’s greatest tacticians—served his country with professionalism and humanity. His men in the Afrikakorps did as well.

In 1946, one of his engineers wrote a poignant letter to the fiance of a British pilot revealing how her beloved died an honorable death by their hands during a 1941 battle. The engineer, Gernot Knopp, wrote to Dorothy Bird of how her fiance William Ross came under heavy anti-aircraft fire during a raid on his fuel ship in eastern Libya. Although Ross died in the mission, the Germans admired his courage and buried him with full military honors, with Rommel himself in attendance. Knopp sent her not only the letter but also Ross’s personal effects and a photo that showed the pilot’s final resting place.

Although Bird already knew about Ross’s death, details from her fiance’s final moments relieved her greatly. 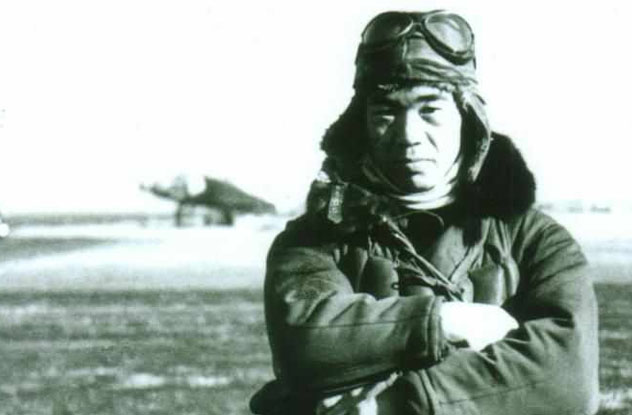 With their sneaky attack on Pearl Harbor, it may be hard to associate gallantry with Japanese pilots. Yet Japanese ace Saburo Sakai proved he had oodles of that and more when he held fire against a civilian plane during one of his 1942 sorties over Java.

With 64 recorded kills, Sakai could have easily blown the plane out of the sky (which, in fact, had been his original intention). However, when he went in for a closer look, he saw the plane carried women and children. He spotted a woman who closely resembled one of his teachers in middle school, an American named Mrs. Martin.

Instead of shooting the plane, he signaled to the pilot to go on ahead and later lied to his superiors, saying that it had escaped. When the war ended, Sakai searched for and met the passengers of the plane he spared, and he befriended the very American pilots he’d fought.

6Penguin Colonies Made Safe By Landmines 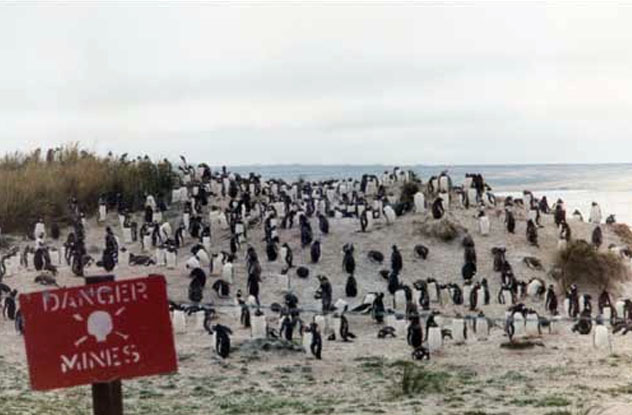 Not all casualties of war are human. Either through collateral damage or because we deliberately set them on fire, animals are also victims. If there’s any creature that has found a silver lining in all this, it’s the penguins living in the Falkland Islands.

During the Falklands War, the Argentinians heavily mined the islands to hold off a British invasion. After the war, penguins came to inhabit the various minefields. Too light to set off the mines, the penguins have thrived in their unorthodox sanctuaries. The fenced-off minefields have also allowed other wildlife and vegetation to recover from the effects of human habitation and overgrazing by livestock.

Although Argentina has offered to de-mine the fields, officials and residents of the Islands refused, believing that “it is better not to fiddle with the fields.” 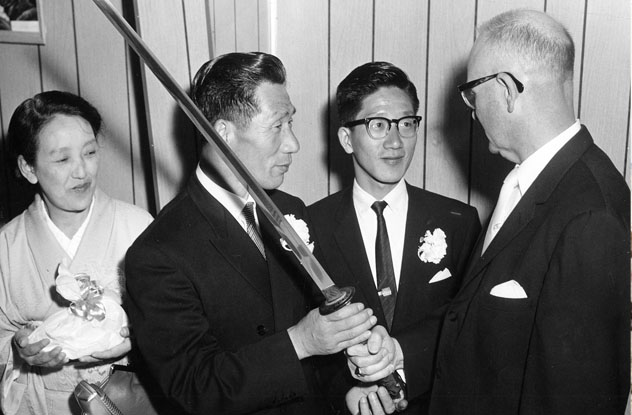 As the only one to successfully bomb the US mainland during World War II, Japanese pilot Nobuo Fujita expected the people of Brookings, Oregon to hate him. He had dropped incendiary bombs on their forests on two separate missions to bring the fight to the US in 1942.

When the city invited him to visit 20 years later, Fujita carried his family’s four-centuries-old sword so that he could kill himself if the people demanded it. However, Fujita never had to commit seppuku—people showered him with goodwill upon his arrival. Deeply impressed by their hospitality, Fujita offered the sword as a symbol of reconciliation.

Fujita became a lifelong advocate for friendship between the US and Japan, buying books for the local library and paying for trips to his homeland. The city expressed its affection for Fujita one more time in 1997, when it made him an honorary citizen shortly before his death.

4German Captain Recommends An Award For His Enemy 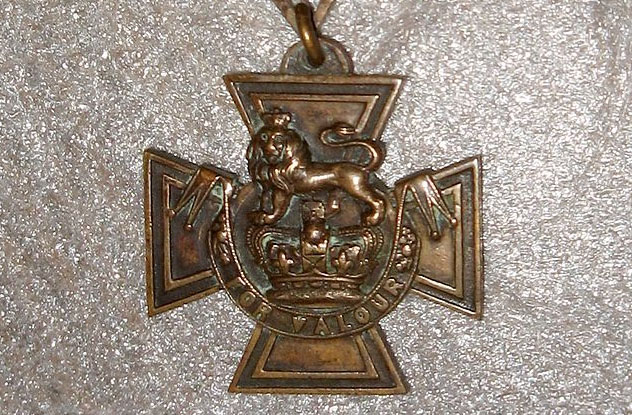 German captain Helmuth Haye actually recommended the awarding of the Victoria Cross (the equivalent of the Medal of Honor) to his British counterpart, Captain Gerard Roope.

During the opening stages of the Norwegian Campaign in April 1940, Haye of the 10,000-ton heavy German cruiser Admiral Hipper came across the 1,345-ton British destroyer Glowworm engaging two German destroyers. Within a few minutes, the cruiser bombarded the smaller ship and set it ablaze. Realizing that escape was virtually impossible, the Glowworm’s Captain Roope turned his ship around and rammed the Admiral Hipper.

In the aftermath, the destroyer sank, and the Hipper took on more than a hundred of the 140-plus crew, including Roope. The Germans commended the British for “a good fight.” Helmuth later sent a letter to the British through the Red Cross recommending the Victoria Cross for Roope. The British complied and gave Roope the award posthumously after the war. 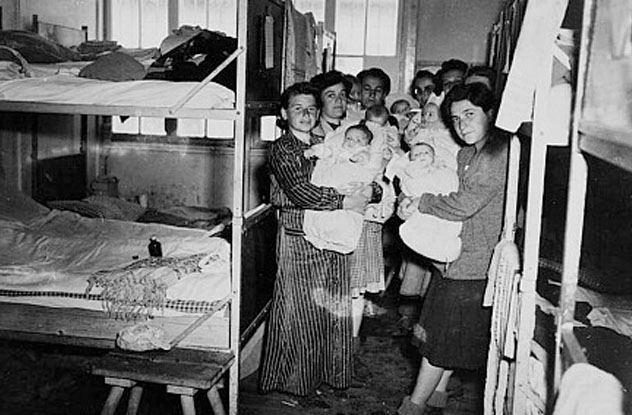 We associate concentration camps with so much death and suffering that it’s nearly impossible to imagine anything good coming from them. Yet against all odds, seven babies born inside a camp survived their ordeal healthy and unharmed.

Their mothers were Jewish women of Hungarian origin locked up in an auxiliary camp in Kaufering. They took great pains to hide their pregnancies from the Nazi eyes to avoid being killed or transferred to the more infamous camp at Dachau. The other prisoners helped the mothers by hiding the babies and taking care of them whenever the mothers had to work. One Jewish woman who oversaw the camp for the Nazis even bore a severe beating after she brought a stove to the mothers’ quarters to help them survive the winter.

For the US soldiers who later liberated the camp, it was an uplifting sight to see the live and healthy mothers and their babies among the dead and emaciated prisoners. 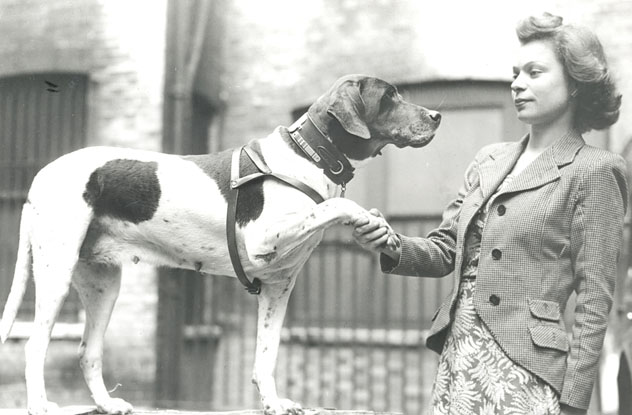 A purebred English pointer and mascot for the Royal Navy, Judy was instrumental in saving lives during her time living in a prison camp. At the Medan camp in North Sumatra, she hunted for extra food for prisoners and regularly stopped the guards from beating men up.

It was in this camp where Judy met her lifelong companion, pilot Frank Williams. To keep the guards from killing her, Williams successfully had her registered as a POW after bribing the drunk camp commandant with one of her puppies.

The duo were briefly separated in June 1944, after a ship carrying them to another camp in Singapore was torpedoed. Judy helped prisoners survive by carrying them toward floating debris. Initially crestfallen, thinking his companion dead, Williams met Judy in an emotional reunion three days later in another prison camp.

After the war, Judy went on to receive a medal for her heroism and lived the rest of her days at Williams’s side. 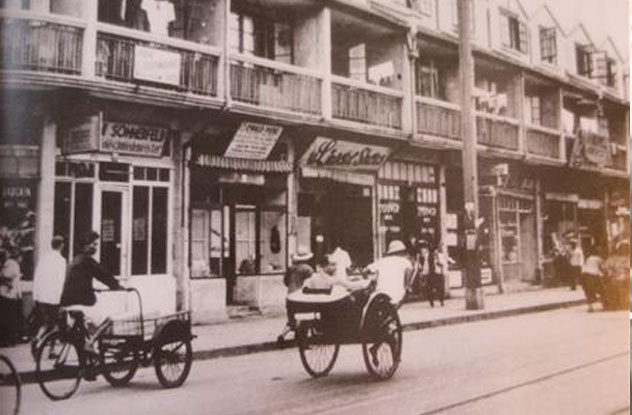 The Japanese took a special interest in the Jewish race. The anti-Semitic tirades they heard in Europe gave them the impression that Jews possessed the knowhow to dominate politics and the economy. Hoping to exploit this expertise so that they, too, could control the world, the Japanese allowed fleeing Jews sanctuary in Shanghai and other territories they controlled.

Thousands of Jews fleeing Europe for these areas were granted protection by the Japanese, despite Nazi protestations. Although Germany finally convinced Japan to set up a ghetto in Shanghai, no starvation or persecution took place there, unlike European ghettoes. Most of the Jews living in Japanese-controlled territory survived relatively unscathed.