The Muppets are a cultural force all on their own, a comedic troupe of puppets that have conquered every form of entertainment, from television to movies to books, theme parks, and radio waves. While they appear overtly child-friendly, there has always been a tongue-in-cheek aspect to them that makes them appeal to all ages. But even Kermit and company are not immune to death, disease, and conspiracy. 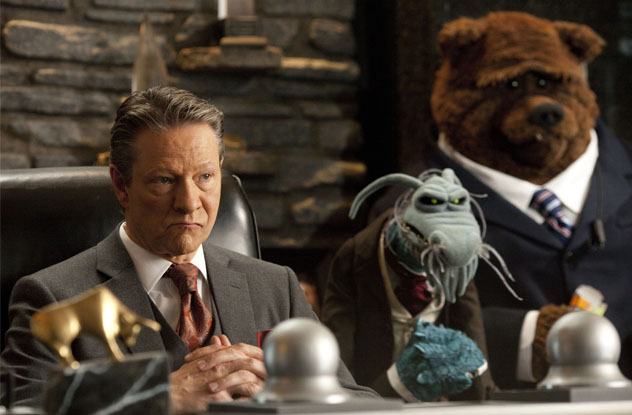 2011 saw the release of The Muppets, the first live-action Muppets film in decades. Starring Jason Segel and Amy Adams, the movie shows the gang, who have drifted apart over the years, banding back together to save their old theater from oil baron “Tex Richman.” The film was rated PG for “mild rude humor,” which is about as innocuous as it comes. But bizarrely enough, the movie found itself in the crosshairs on the Fox Business show Follow the Money, where host Eric Bolling called it an attempt by radical liberals to brainwash children against capitalism.

In trying to save their theater against Tex Richman, the Muppets symbolically attack the oil industry, claimed Bolling. Dan Gainor, an invited guest, drew parallels to the Occupy Wall Street movement, saying that movies and television have for years indoctrinated children “that mankind is a virus on poor, old Mother Earth.”

Journalists mercilessly mocked these absurd claims. The Washington Post‘s Alexandra Petri, for example, sarcastically criticized Kermit’s nudity and complained that “there is a pig engaging in an inter-species relationship with a frog. This is literally the slippery slope that sprang into people’s minds when they voted yes on Prop 8.”

Relive your childhood with the best Muppets character ever – buy a Deluxe 17 inch Beaker Plush Toy at Amazon.com!

The Muppets underwent a significant evolution over the years. The original Kermit the Frog was more of a lizard, made from one of Jim Henson’s mother’s coats with halved ping-pong balls for eyes. Some of these other early creations were Wilkins and Wontkins, two little creatures used to shill Wilkins Coffee in 10-second commercials. The formula included eight seconds of action with the puppets and two seconds featuring the company logo.

Between 1957 and 1961, Jim Henson made 179 such commercials, which most often featured the giddy Wilkins (played by Jim’s wife Jan) visiting unthinkable violence against his glum comrade (played by Jim). Wontkins was stabbed, beaten with a hammer, electrocuted, shot, blown out of a cannon, and even subjected to the guillotine.

The ad campaign was a massive success, with sales of Wilkins Coffee rising some 25 percent. It also generated the first Muppets merchandise—the company offered vinyl Wilkins and Wontkins toys to customers who sent in a dollar and a proof of purchase. This first trickle would eventually grow to a billion-dollar enterprise.

The best children’s entertainment also appeals to adults, so that parents can watch alongside their kids without being bored to tears. This territory was pioneered by Jim Henson’s Muppets. Indeed, the second pilot episode of their show, airing on March 19, 1975, was called “The Muppet Show: Sex and Violence.”

In the above skit, Rowlf the Dog and Sam the Eagle sing “On a Tree By a River” from the Gilbert and Sullivan opera The Mikado. The song is treated as a lament, but it’s really just an excuse to make the normally straight-laced Sam say the word “tit” over and over again, much to the amusement of the studio audience.

During the poorly received 10-episode run of the 1996 show Muppets Tonight, veteran actor Billy Crystal appeared in a skit with the always lascivious Miss Piggy. Piggy did a screen test for Crystal’s film When Harry Met Sally, recreating the scene where Meg Ryan’s Sally demonstrates faking an orgasm. This version is tweaked somewhat to change orgasms to sneezes, but the context is unmistakable. 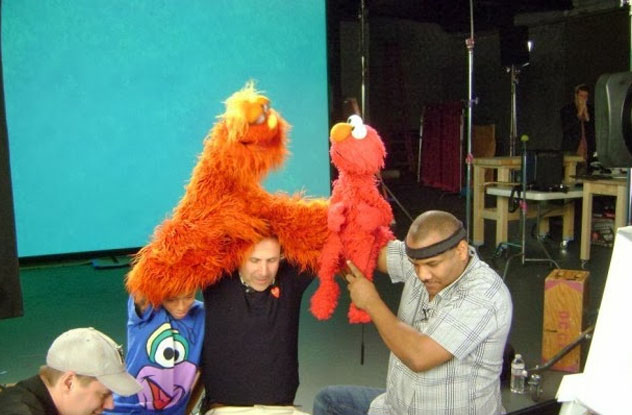 According to Jim Henson’s wife Jane, the word “Muppet” is a portmanteau of “marionette” and “puppet.” Over the years, there have been innumerable muppets—human, animal, and various mixes of the two. Although methods vary, most of them are cut from foam and covered with a substance called antron fleece.

In the beginning, many Muppets were relatively basic, often worn on the hand of someone hiding behind scenery, yet they often required multiple people to operate them. According to puppeteer Frank Oz (who has performed as multiple Muppets and as Yoda from Star Wars), making these motions appear natural is enormously difficult.

Over the years, the Muppets have gotten progressively more sophisticated, with the use of remote controls and even a telemetry device called “The Henson Performance Control System.” This process manipulates animatronic characters wirelessly and makes them appear quite lifelike. The illusion of life can otherwise appear through the simplest means (such as a dwarf in a costume), or the most elaborate manipulations of perspective. In 1979’s The Muppet Movie, Kermit the Frog sits on a log in a real swamp. Puppeteer Jim Henson had secreted himself in a tiny chamber under the log. 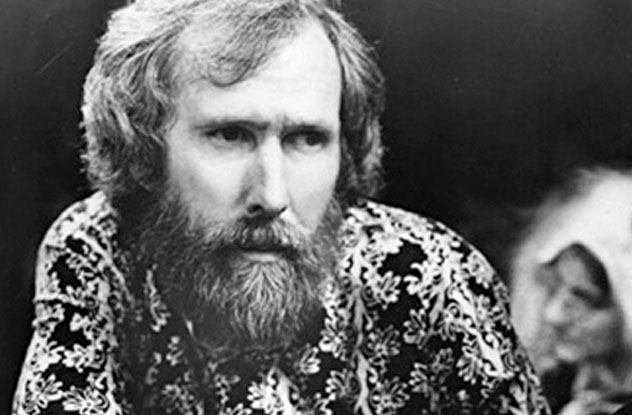 When a famous person dies suddenly, it tends to raise a lot of eyebrows. Jim Henson’s case in particular seemed a bit fishy. In early May 1990, Henson reported tiredness and a sore throat, which progressively worsened. He went to a doctor on May 13, but no evidence of anything serious was discovered. Three days later, he died of organ failure. Many assumed this sudden passing was due to AIDS.

At the time, AIDS carried with it a tremendous stigma, and treatment methods were in their infancy. People were dying en masse at the time—teenage activist Ryan White died less than a month later, with Queen frontman Freddie Mercury passing in November 1991. Obituaries often glossed over AIDS, instead listing more obscure causes of death. Liberace’s New York Times obituary says he died from “cardiac arrest due to congestive heart failure brought on by subacute encephalopathy.”

However, rumors that Henson had AIDS were not true at all. He actually died from Streptococcus pyogenes infection, or strep throat. While we tend to consider strep throat a mild illness that children catch, one easily treatable with antibiotics, it can carry with it horrifying complications. Henson’s developed into a more serious condition, streptococcal toxic shock syndrome.

Written for Kermit in 1979’s The Muppet Movie, the song “The Rainbow Connection” is a bit mawkish and sweetly-sad in the vein of The Wizard of Oz‘s “Somewhere Over The Rainbow.” The song was an unlikely hit, earning an Oscar nomination and becoming the subject of countless covers.

In March 1996, things took a bizarre turn for “The Rainbow Connection” when a 21-year-old man took the manager of a Wanganui, New Zealand radio station hostage. He demanded that the song be played for 12 consecutive hours, else he’d blow up the station with a bomb he carried. Police cordoned off the area and evacuated nearby buildings as they assessed the scene. Luckily, they managed to defuse the situation without any violence, taking the unnamed man into custody.

According to a police inspector, the supposed terrorist wanted the song played to “tell people how he felt.” The bomb was fake.

In 2010, pop star Katy Perry made a visit to the Muppets of Sesame Street, doing a sanitized duet with Elmo of her hit “Hot N Cold.” The segment was scheduled to air on the show’s September 27 season premiere but was released in advance on YouTube.

Perry wore a low-cut dress over a flesh-colored bodysuit, which was a far cry from her from some of her flamboyant performance costumes. Nevertheless, some viewers of the video responded to the sight of Perry’s cleavage with outrage, claiming to represent parents in general. Faced with considerable backlash, producers decided to never air the segment.

A few weeks later, Katy appeared on Saturday Night Live, which poked fun at the incident. On the show, she wore an Elmo T-shirt slashed down the middle to reveal considerably more than she had on Sesame Street. Cast member Maya Rudolph quipped, “Who cares if kids are looking at boobs? Boobs feed babies . . . I turned on CSI the other night, and there’s a dead guy with a worm in his eye. But we can’t look at the tops of boobs?”

Decades before Katy Perry was drummed off Sesame Street, The Muppet Show was famous for its eccentric guest stars, including many personalities no child would ever recognize. These included an appearance by horror movie veteran Vincent Price, whose episode was full of ghouls and monsters. In one scene shared with Kermit, the frog grows a set of vampire fangs and bites Price on the neck. In another somewhat unsettling skit, a man’s furniture comes to life and devours him.

Even stranger were appearances by shock rocker Alice Cooper and country music bad boy Johnny Cash. In a Halloween 1978 episode, Alice appears in vampiric stage makeup as a henchman of the devil, trying to trick the Muppets into selling their souls. Cash’s appearance includes the song “That Dirty Old Egg-Sucking Dog,” which irritates pianist Rowlf. In the background, a Confederate flag hangs.

Watch it again! The Muppets need to band together for one last performance in the critically acclaimed 2011 film The Muppets at Amazon.com!

“Mah Na Mah Na” is a cute little nonsense song associated with the Muppets for decades. In 1969, Jim Henson borrowed the tune and debuted the character Mahna Mahna, a kind of wild-haired hippie monster with shades, on The Ed Sullivan Show. He performed the song with two creatures called the Snowths, which resemble a crossbreed of cows and flamingos.

When Henson made the transition to Sesame Street, he took the song with him, and it rocketed up the charts. Over the years, there have been various different versions of the ditty; it was featured during the end credits of 2011’s The Muppets, sung by the puppets and various stars in cameos.

However, this song has a surprisingly dark history. Written by Italian composer Piero Umiliana in 1968, the song was first used in a Italian mondo (exploitation documentary, or shockumentary) called Sweden: Heaven and Hell. Far from lighthearted fare, this film depicted the sexuality of Swedish citizens, with sections on lesbian nightclubs, swingers, and the like.

1Big Bird Was Scheduled To Ride On Challenger 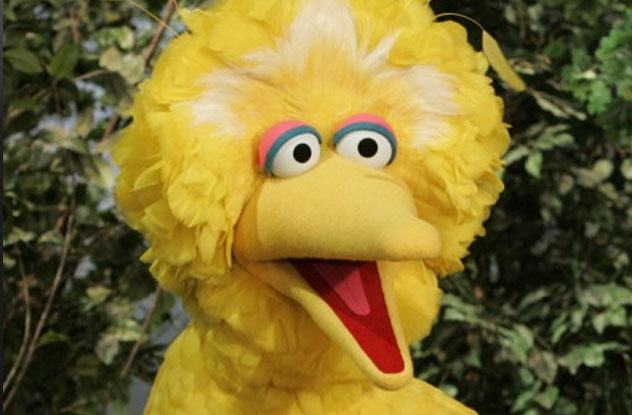 Caroll Spinney was one of the original puppeteer cast members of Sesame Street when the show began in 1969. Although he has performed as several characters, his main ones are Oscar the Grouch and Big Bird. At age 81 in 2014, he continues to play them, despite the rigors of operating the Big Bird puppet.

Spinney is 180 centimeters (6 ft) tall and Big Bird is 242 (8’2″). He uses an elaborate set of controls to move, with his right arm held overheard to move the head. His pinky moves the eyelids, and his thumb moves the beak. He cannot see inside the costume; a small screen inside shows what the audience sees, forcing him to choreograph all his motions in reverse.

Carroll’s 45 years as Big Bird have been largely free of trouble, but one incident 28 years ago nearly changed everything. In the mid-1980s, NASA was looking to interest the next generation in the space program, and they approached Carroll to ride along on the Space Shuttle Challenger. However, the logistics of sending an inexperienced person on the shuttle with an giant puppet proved too difficult to overcome, and teacher Christa McAuliffe took Spinney’s place.