Abandoned places are captivating, as they often give us a direct glimpse of what life must have been like in the past. There are some locations that seem as if they are places that time forgot, as if life has ceased to exist. 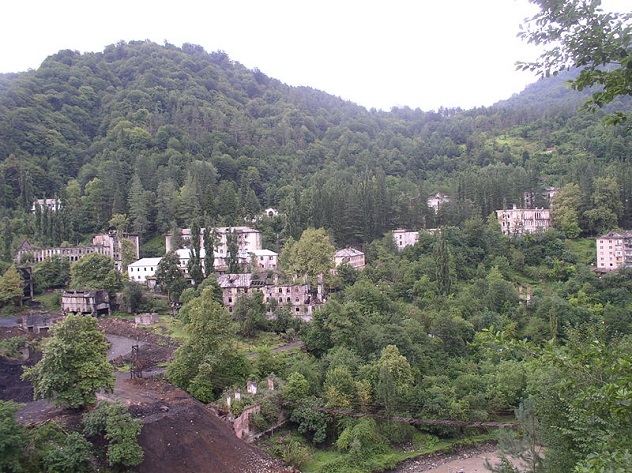 This Soviet ghost town is technically located within a country called The Autonomous Republic of Abkhazia, which is only officially recognized by five other countries. To the rest of the world, these are just the remains of another Georgian town that supplied the Soviet industrial machine.

The town was constructed back in the 1940s to supply coal to the Soviets. As such, it was built to last long into the future. However, during the war of independence in the early 1990s, the town fell to Georgian forces. Tkvarcheli was occupied by the Georgians for more than a year, until Abkhaz forces reclaimed the town with the help of the Russians.

Sadly for the town, it was too late, as the Soviet era was already in decline. The population of the town steadily dwindled until it was eventually abandoned for good. Nowadays, it serves as a creepy reminder of life at the height of the Soviet Union. 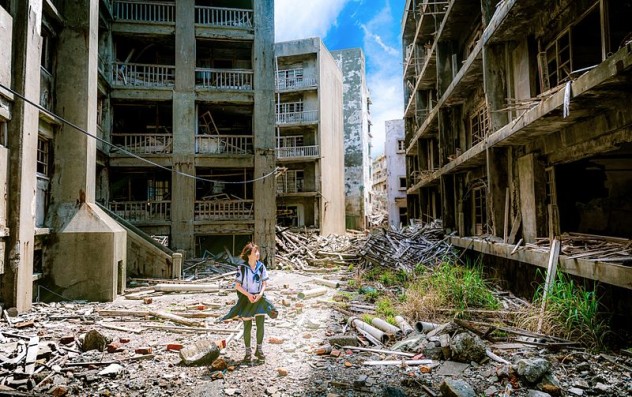 At first glance, it’s not hard to see why this island was nicknamed “Battleship Island.” Approached from the water, it really does look like a giant concrete battleship, thanks to its high sea walls. But the history behind this small island isn’t nearly as pretty as its panoramic views.

Hashima was a coal mining town from 1887–1974, which aided in the industrialization of Japan. Naturally, mining is back-breaking work, so the demand for workers was high. By 1959, there were 5,259 miners living on the island, crammed into just 16 acres of land. As one of the most densely populated areas in the world, living conditions soon declined to prison-like levels.

In the 1960s, petroleum started to replace coal. Many mines throughout Japan were shut down shortly thereafter, including Hashima in 1974. Within a matter of weeks, one of the most densely populated places on Earth was deserted, and the island was left to rot and weather the elements. 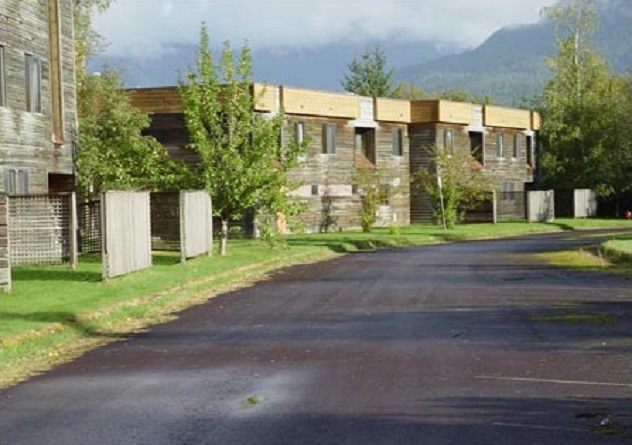 The town of Kitsault sits in the province of British Columbia, Canada. It featured more than 100 homes, 200 apartments, a hospital, a shopping mall, a movie theater, a sports center, and a bank. What more could you ask for this far up north? The only missing thing is the people.

The town formed in 1979 around the steel production industry after a molybdenum source was found nearby. For a while, all was well, but the town’s fate was sealed when the price of molybdenum crashed. As a result, the mine was shut down, and by 1983, Kitsault had turned into a ghost town almost overnight.

The town may possibly have found a saving grace, however, in the form of an entrepreneur who bought the place for $5 million in 2004. He hopes to resurrect the town from its slumber, but only time will tell if the plan is successful.

Time capsules are always fascinating, as they provide a direct, unobstructed view into the past. Although most time capsules found nowadays are intentional, it’s exciting to stumble upon accidental ones like this amazing apartment in Paris.

In the 1940s, the apartment was owned by a Mrs. De Florian, who fled south just before World War II broke out. She left her apartment locked, never to return again, which is how it remained for 70 years. After De Florian passed away, the apartment was finally opened for her heirs to take inventory. Underneath layers of cobwebs and dust, everything was found just as De Florian had left it, including a stunning painting of a woman dressed in pink.

Along with this painting, the inventory team also found a couple of old love letters, which were neatly wrapped in ribbon. Most love letters are only interesting to the people who sent or received them, but these ones were much more than pretty words on paper—they were confirmed to have been written by Giovanni Boldini, who was one of the most influential painters of the Belle Epoque. He was the artist behind the painting, which depicted De Florian’s grandmother, a high-society French actress and courtesan. The painting was later sold for a staggering 2.1 million Euros ($2.85 million USD). 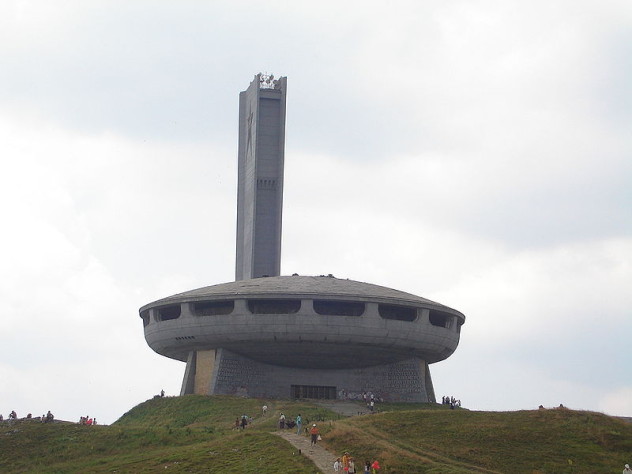 Although at first glance, this structure looks like a giant concrete saucer on top of a mountain, Buzludzha is actually a monument dedicated to communism. The story behind its inception goes all the way back to 1891, when Bulgaria’s socialist faction met on this exact spot to discuss Bulgaria’s future. Construction began in 1974, and the building was richly decorated with an abundance of Bulgarian and Soviet symbols, including a series of colorful mosaic frescoes on the walls. Perhaps the most impressive feature of the Buzludzha Monument is the colossal hammer and sickle in the middle of the dome ceiling.

Sadly, this beautiful building eventually fell to squalor, as the Bulgarian communist party disbanded following a revolution in 1989. Ownership of the monument was transferred to the government, which simply sealed off the main entrance and left it to be ravaged by vandalism and the elements. 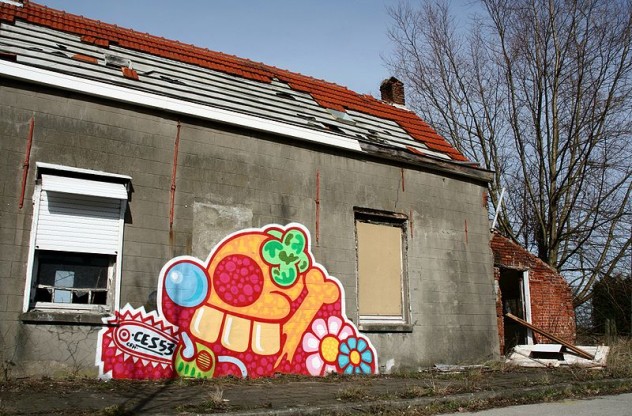 The town of Doel is 700 years old, but in an effort to expand the nearby harbor, the Belgian government scheduled the town for demolition and forced its residents to move. Subsequently, Doel turned into a ghost town, silently awaiting its demolition. The few citizens who refused to leave took an unusual stand against their predicament, bringing in street artists from all over Europe and encouraging them to turn Doel into their personal canvas as a form of protest.

The end result was spectacular, as the walls of the all-but-abandoned town transformed into a life-size living art gallery. The contrast between the old, historic buildings and the layers of modern graffiti that adorn them is breathtaking. Only 25 residents remain in this post-apocalyptic artistic paradise, and their future in Doel looks bleak. Demolition is still on the horizon, and they’ll all have to leave once the wrecking ball comes. 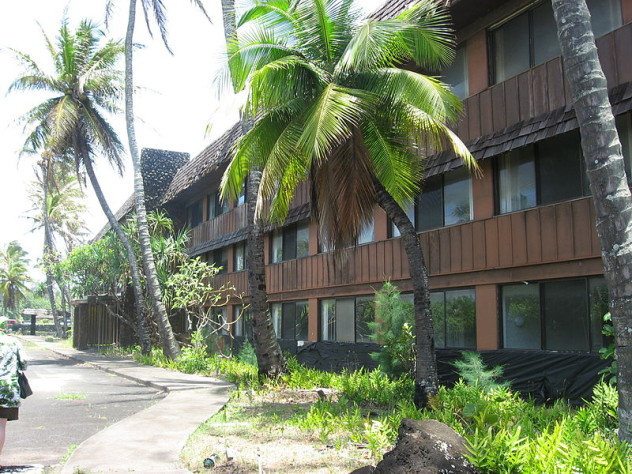 Known as the setting for the classic film Blue Hawaii, the island resort of Coco Palms is anything but a tropical paradise. The resort opened in 1953, and thanks to some marketing for the film Miss Sadie Thompson by MGM, business did not take long to pick up. However, once Elvis Presley arrived to film the instant hit Blue Hawaii, the resort became a runaway success. Couples from all over the globe, including A-list celebrities, wanted to spend their vacations and honeymoons on Elvis’s island nirvana.

For a few decades, it appeared that Coco Palms was here to stay, but in 1992, it fell victim to Hurricane Iniki. Most of the island was badly hit, and the resort couldn’t escape the colossal repair bills. Many insurance companies went bankrupt in the aftermath of the storm, so many repairs could not even be performed. This sent the whole island into a recession, from which the resort would never recover.

Still in tatters from the storm, the property was soon overtaken by vandals and thieves. Cottage 56, the suite where Elvis stayed, was an especially popular target. Although many redevelopment and restoration plans have been proposed, the resort is still a long way from recapturing its glory days. 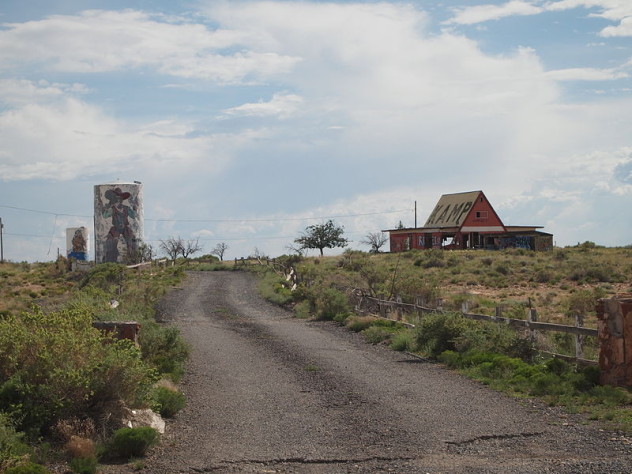 The story behind Two Guns, originally called Canyon Lodge, is a sad one. It all started in the 1920s, when the infamous Route 66 gained massive traffic from adventurous travelers. Many of these travelers stopped for supplies at Canyon Lodge, which was just a small trading post run by Earle and Louise Cundiff at the time. The town’s success quickly caught the attention of the entrepreneur Harry “Two Guns” Miller, who recognized the the vast amounts of wealth to be gained there. He convinced the Cundiffs to lease him the site for 10 years and renamed the town. Under Miller’s command, the town was transformed into a full-blown tourist trap, complete with its own zoo and attractions.

One of these so called “attractions” was a nearby canyon, which was the site of a battle between the Apaches and the Navajos. Inside the canyon was a cave called the Apache Death Cave, which served as a tomb for 42 Apache men. Although the cave’s backstory is fascinating in its own right, Miller decided that it wasn’t intriguing enough for his tourists. He renamed it “Mystery Cave,” built fake ruins, sold the Apache skulls as souvenirs, and perhaps most egregiously, added a soda stand.

The town soon fell victim to a major robbery, which made relations between Miller and the Cundiffs very tense, culminating in a heated argument during which Miller shot Earle Cundiff dead. Incredibly, Miller was acquitted at trial, but shortly thereafter, he was attacked twice by mountain lions and bitten by a Gila monster. This trail of bad luck finally reached a tipping point in 1929, when a fire burned down the whole town. After losing a court battle with Louise Cundiff to keep the land, Miller left. Route 66 was rerouted to the opposite canyon, and Two Guns slowly faded into obscurity, its golden days long behind it.

2The Cinema At The End Of The World 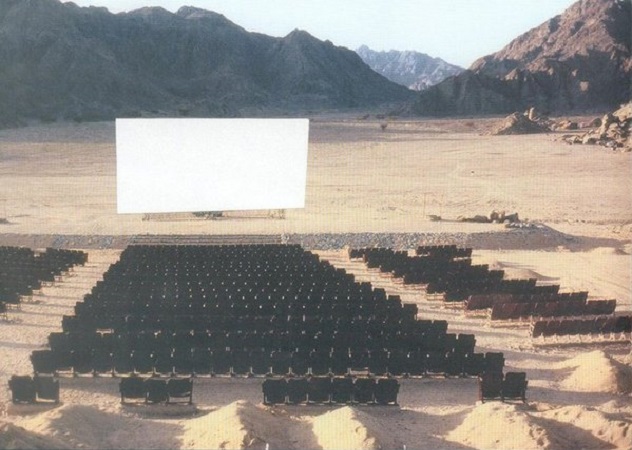 In the middle of the Sinai desert lies a mysterious cinema that never saw an audience. Information about this place is very scarce, and it leaves us with more questions than answers.

The oddly situated setup was built by a French film buff named Diynn Eadel in the 1990s. Somehow, Eadel managed to secure the necessary building permits and convinced Parisian investors to buy seats and projectors from the old theaters of Cairo. The resulting arrangement, which would seat 700 people, sadly never saw an opening night, and no one seems to know why. The theater might have gone unnoticed for years had it not gathered attention from the media recently after it was vandalized and destroyed, most likely for scrap metal. 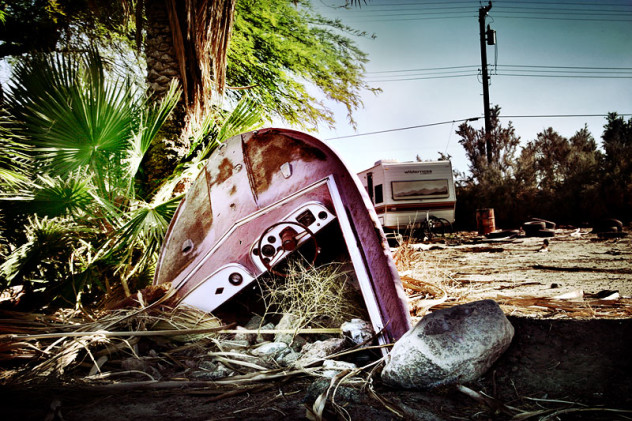 Looking as if it came straight out of a post-apocalyptic world, the Salton Riviera is one of the most awe-inspiring locations on Earth. It was built around the Salton Sea, the largest body of water in California, which was amazingly created by accident when a flood poured in from the Colorado River over the course of two years at the turn of the century.

Many thought that the floodwater would eventually dry out, but years went by seemingly without a drop of evaporation. Developers soon recognized the opportunity the lake presented and built a full-fledged resort upon it, advertised as the “Miracle in the Desert.” The Salton Sea, as it had been named, became the French Riviera of California. Tourists flocked to the resort from all over the country, and many even settled down in a place that had once been uninhabitable desert.

However, this paradise would not last forever. Since the lake was only fed by agricultural runoff, the water became increasingly saltier over the years. Millions of dead fish floated to the surface of the lake, whose white sandy beaches were soon covered in their bones. All the tourists fled from the town, which had become overpowered by the stench of rotten fish. Almost overnight, the Salton Riviera was abandoned, left to become the toxic wasteland that it is today.

I’ve been a longtime reader of Listverse, and now I’ve decided to take the plunge and start writing my own lists. You can send your comments and suggestions here.