The British Isles are home to some of the most lavish and historic landmarks, many of which are famous all over the world. Think Big Ben or the Houses of Parliament. But perhaps not as famous are the unbelievably named towns and villages found strewn throughout the land.

When we say “unbelievably named,” we actually mean humorous, rude, or downright bizarre names for places which are actually inhabited or visited by human beings. However, some of these places actually have amazing and rich histories, which are worth reading in their own right. Read on to discover ten of the rudest-sounding places in the British Isles . . . with unbelievable stories. 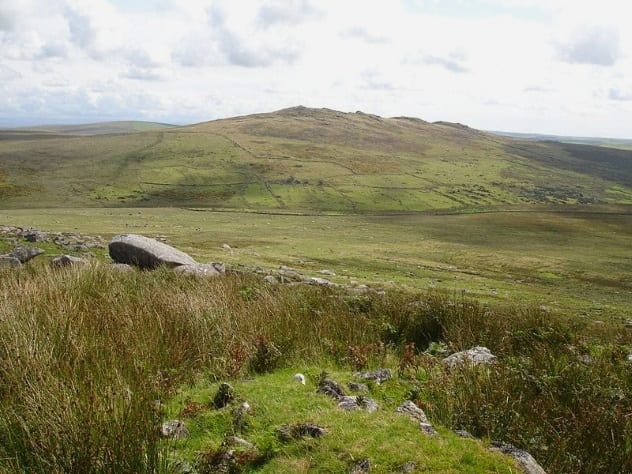 Brown Willy is a hill that can be found in the county of Cornwall, the southernmost county of England. The hill supposedly gets its name from the Cornish Bronn Ewhella, which translates as “highest hill.” This is likely due to the fact that Brown Willy stands 420 meters (1,378 ft) above sea level and is the highest point in Cornwall. The hill is also known for the “Brown Willy effect,” a local phenomenon in which heavy rain that has developed on Brown Willy travels downwind causing showers in lower areas. The effects of this phenomenon can be serious flash flooding and dangerous amounts of rainfall, causing widespread damage.

In 2012, local visitors to the hill campaigned to have the name changed due to the “giggle factor”—but the name remains unchanged today.[1] Interestingly, Brown Willy is widely regarded as sacred by UFO followers, who visit the hill annually. These followers believe Brown Willy was supercharged with what they call “holy energy.” We can only hope that this is a myth, and Brown Willy does not explode. 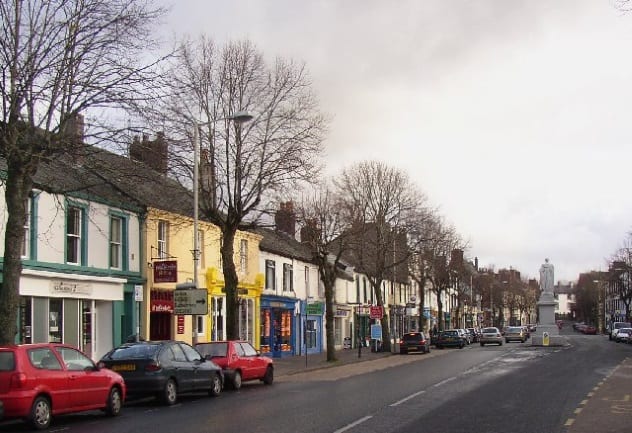 Cockermouth is without a doubt the most stunning location of this list. Situated on the edge of the beautiful Lake District in the county of Cumbria, Cockermouth is known as only one of 51 “Gem” towns in the UK.[2] The name is derived from the town’s location, as it is quite literally at the mouth of the River Cocker. Due to its proximity to the River Cocker, it has also, unfortunately, been home to terrible flooding. In 2009, it was so heavily flooded that the British Army had to take control of the town in an aid effort, airlifting people out from their homes.

Cockermouth traces its history back to the Romans, who built a fort, which was later destroyed, in the vicinity of the current town center. Cockermouth Castle was rebuilt near it. The town is also notable for being the birthplace of the famous Lake Poet William Wordsworth, and the town contains tributes to him. The most famous of these is Wordsworth House, his birthplace, which has been restored and is now a museum. 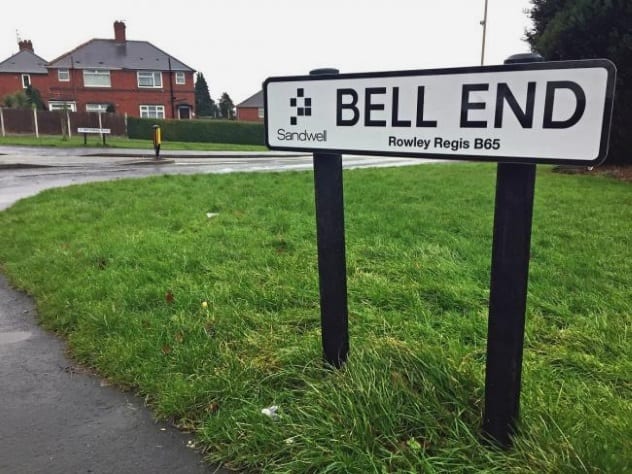 Found in the county of Worcestershire, Bell End is a village with proximity to the notable towns of Kidderminster and Stourbridge. The village is home to a stunning Gothic revival mansion known as Bell Hall. The mansion is built on property dating back to Norman times and has a Norman chapel to go with it. According to some reports, Guy Fawkes hid on the property when he was on the run, after the failed Gunpowder Plot of 1605.[3] Another notable resident, Lady Godiva, was said to have resided on the original grounds. Lady Godiva is most known for being said to have ridden naked through the streets of Coventry to protest against taxation laws. If the reports are true, then the estate has a fantastic link to some of the most infamous figures in Britain’s history.

So, why is Bell End on this list? For those not aware, Bell End shares its name with a British slang phrase for the glans penis and is frequently listed as one of the most unusual or shocking place names. Unfortunately for residents who have campaigned to have the name changed, it still remains Bell End today. 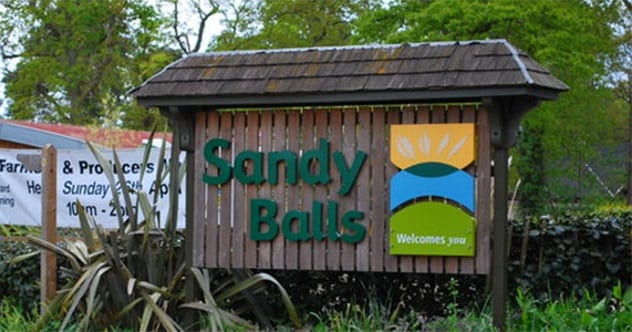 Set deep within the New Forest near Fordingbridge, Sandy Balls is a large area of parkland and forests with a long history of being a popular holiday spot. Sandy Balls is in the county of Hampshire, near the south coast of England. The name of the area goes back to medieval times in England, during which the circular, sandy domes gave the place the name “Sandyballas.” After the end of World War I, the area was developed as a school camp for a youth movement, but it has now been established as a popular holiday center.[4]

The New Forest has been touted as possibly the most haunted part of Britain due to a number of sightings, the most famous being Rufus the Red, who was suspiciously killed by an arrow while hunting in the forest. Local stories say that Rufus’s ghost can still be seen today in the forest, and the blood of the man who was responsible for firing the arrow—Sir Walter Tirel—turns the Ocknell Pond red every year. Other apparition sightings include the Stratford Lyon, a large, antlered, red lion that carries a man on its back. The Lyon was said to have come from the ground after the man pulled at a set of antlers. Another is the Witchy White—a witch who casts love spells and who is said to wander the forest to this day. 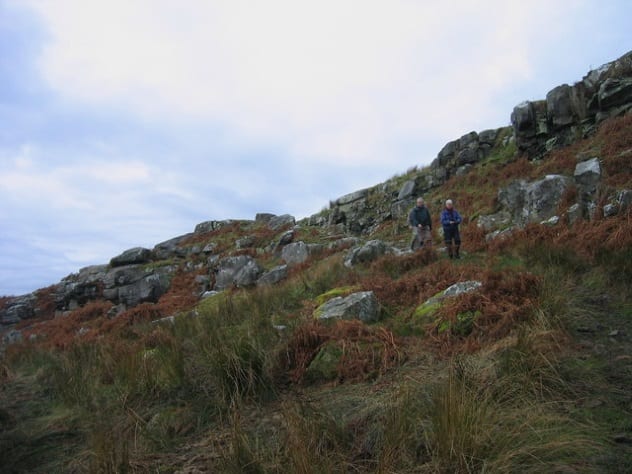 Shitlington Crags is an area in Northumberland which is a popular visitor spot. A crag, in England, is typically a group of cliffs which are known for climbing. Shitlington Crags is known as part of a larger walking area in the Hexham area of Northumberland. The crags get their name from an abandoned medieval village known as Shitlington. It was first recorded in 1279 but seems to have been gone by the 17th century.[5]

Shitlington Crags is near the village of Wark, Northumberland, which is noted for having the Goatstones. The Goatstones are thought to be religious stones left by the Anglo-Saxons, and they get their name from Anglo-Saxon gyet stanes, which means “wayside stones.” Wark is also the home of a listed Milky Way Class Dark Sky Discovery Site, meaning the area is so secluded that the stars and Moon are illuminated brilliantly in the night sky. 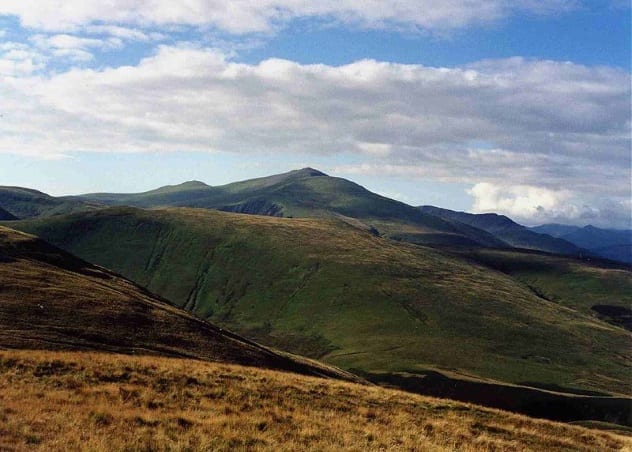 The amusing-sounding Great Cockup is a fell which is located in the stunning Lake District, in the county of Cumbria. A fell is a high, barren landform, like a cluster of mountains or large hills that can often be traversed by walkers. Great Cockup is partnered by its equally amusing-sounding neighbor Little Cockup.[6] For those unaware, “cockup” is a slang term for badly messing up, particularly in an embarrassing way.

Great Cockup is part of a number of mountains in the area known as the Northern Fells. The Northern Fells include Souther Fell, which is most famous for a ghostly sighting that occurred in 1745. According to witnesses, on the evening of Midsummer’s Day in 1745, a line of troops marching were noticed walking along the ridge of the fell. The line included horses and carriages, and witnesses were said to be “sober and respected,” therefore verifying as credible. The following day, Souther Fell was scaled, and not a single footprint or carriage mark could be found along the edge where the army had traveled. 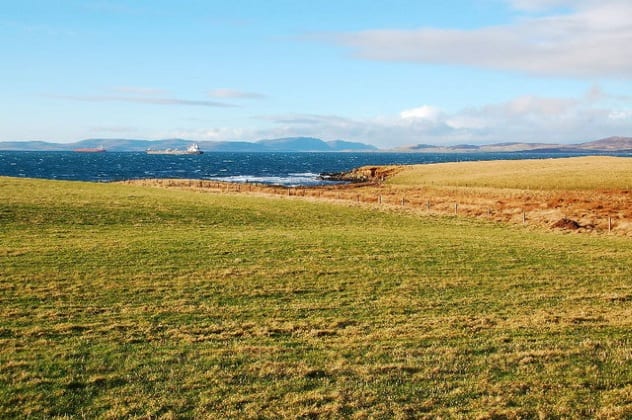 There is extremely limited information about the toponymy of Tongue of Gangsta. Kirkwall was historically an outpost or meeting place for Scandinavian travelers. It has been described as being the center of their world and as more Scandinavian than Scottish. The area was acquired by King James III in 1468 and has been under Scottish rule ever since. During World War II, in the nearby Scapa Flow, the Royal Navy used the port at Scapa as a main base. In 1939, the HMS Royal Oak was sunk by a German U-Boat and is now designated as a protected war grave. 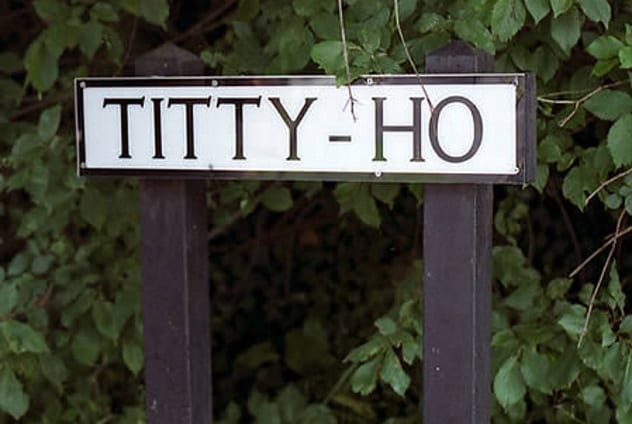 Within the small market town of Raunds, Northamptonshire, is an area known as Titty-Ho. Titty-Ho is cited as being one of the most amusing names in Britain, and unfortunately for residents, the name has been highlighted on TV.[8] Residents have noted that other people cannot contain their laughter when they disclose where they live.

Despite the immature-sounding name of one part of it, the town of Raunds has an interesting history. During the 1980s, excavations in the nearby Nene Valley revealed some remains of a Roman villa. This was in addition to finding medieval buildings such as a church and manor house the previous decade. Raunds has also been the site of prehistoric findings unearthed by English Heritage. Perhaps one day, a discovery may help archaeologists to determine exactly where the name Titty Ho comes from, but this may just be wishful thinking. 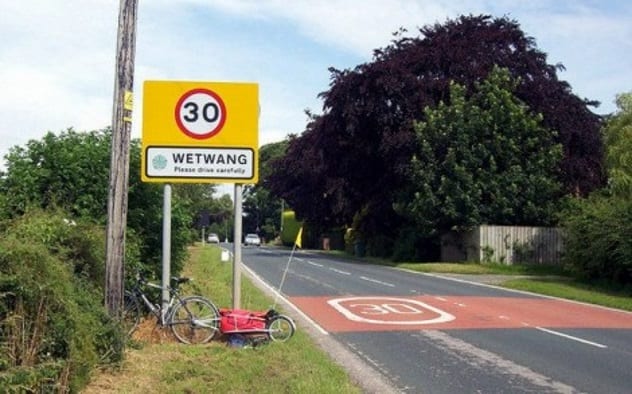 Wetwang is a village located in the historic county of Yorkshire. The village name is proposed as being a Viking name meaning “meeting place”—as the village is located on a crossroads of two main roads.[9] The name can obviously be misconstrued as meaning something else entirely.

Wetwang is very old and is even recorded in the Domesday Book of 1086! The village is known to have existed long before 1086, however, and in 2001, a very exciting discovery was made under Wetwang. A chariot, belonging to British armies who fought against Julius Caesar, was uncovered alongside the remains of a female warrior. A street in Wetwang was renamed “Chariot Way” after this event.

Wetwang is also notable for its black swans and has a local public house named the Black Swan in honor of the local birds. The village often appears in lists of unusual or rude place names. During a Woman’s Institute centennial fair in 2015, the name of the village had to be censored on merchandise, as it was deemed as too rude! 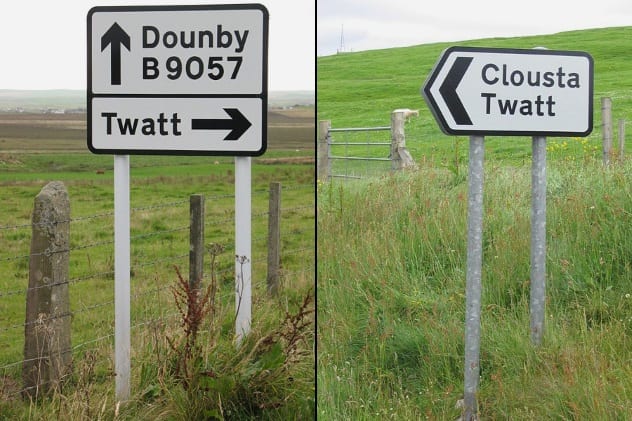 In what is probably the bluntest and most uncouth village name on this list, the village of Twatt can be found on the Orkney Islands. In a twist, there are actually two villages in the UK which share the name of Twatt. Interestingly, both villages are found right at the top of Scotland, with the second Twatt being located in the Shetland Islands.

The village in Orkney is situated on the Mainland island.[10] The Orkney Twatt was the home of a Royal Navy airfield during World War II. The airfield was decommissioned in 1949, but an abandoned control tower still remains today and can be visited.

The village of Twatt in the Shetlands is a little less known but is definitely inhabited by people and known throughout the islands. The name of both Twatts derives from the Norse word thveit—meaning “small parcel of land.” As you would expect, both places frequently top the lists of the most rude-sounding village names in the UK.

Matt Garrow—I have an English degree (which I use) and a Law degree (which I don’t). I currently work a 9–5 and can found sleeping standing up because I have a 2 year old who doesn’t sleep. Peace !

Read about more crazy names on 10 Insane Names Parents Tried To Give Their Kids and 10 Badass Medieval Monarchs With Obnoxious Nicknames.