Mankind’s spiritual history is packed with interesting snippets. In recent times, archaeologists have discovered some of the oldest sites of worship with hidden worlds under cathedrals and art not seen in centuries.

When it comes to the religious arena, however, archaeology can step on a few nerves. These days, eyewitnesses and science can shake the truth of biblical tales and dismiss relics as forgeries. 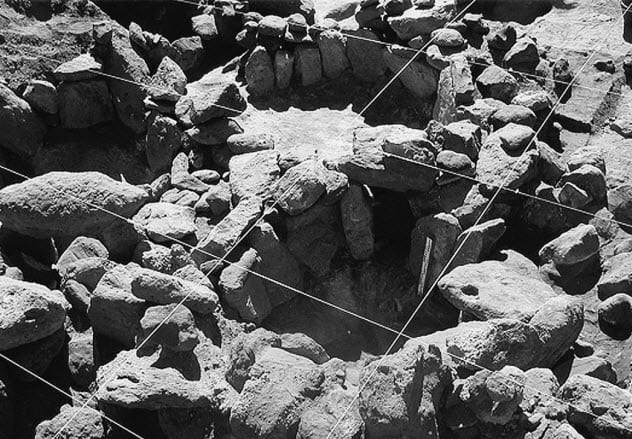 The driest patch in the world is Chile’s Atacama Desert. Thousands of years ago, people survived by living in so-called eco-refuges. These places had enough resources to support a population.

A few years ago, new ruins suggested that different eco-refuges worked together to construct two religious complexes 1 kilometer (0.62 mi) apart. Although it cannot be said with certainty what occurred at these sites, there was a ceremonial element. One site, aged 3,200 years, suggested that wealth was possible in the desert, even one as harsh as Atacama.

A 2015 investigation revealed massive stone monuments, 28 child burials, elaborate offerings of gold, and imported artifacts from the Pacific and Amazonian regions. Grinding equipment showed that food, beverages, and even hallucinogens were extensively prepared at the complex.[1]

The older site, aged around 5,000 years old, was excavated in 1985 and wrongly identified as a settlement. A 2018 study showed that it was similar to the other complex and did not have domestic homes. Both sites also had mortars dusted with red pigment, which was probably stamped into a fine powder for a ceremonial purpose. 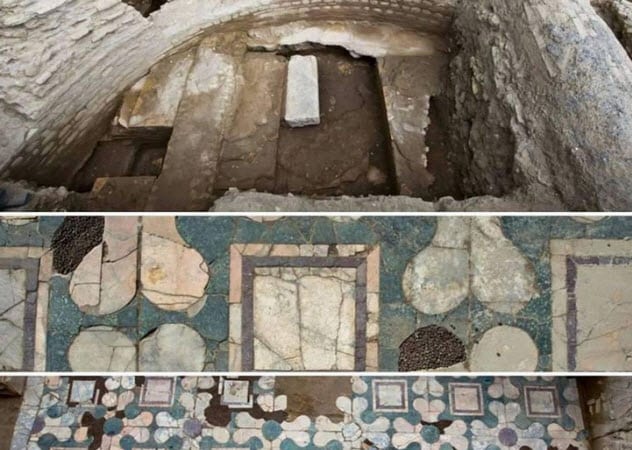 When electricians recently installed cables in Rome, they found ruins. The city is known for ancient finds, so the moment was not unexpected. However, the old building was enigmatic. It was possibly a Roman villa, but archaeologists were convinced it had a more public use.

Clues suggested a place of worship. Nearby was a graveyard, including mausoleums. It also dated to the time when the first churches were allowed in Rome. In AD 312, the Roman Emperor Constantine lifted the persecution of Christians, who were a minority.[2]

Dating back to the third or fourth century, the ruins could belong to one of the city’s oldest free-practicing churches. Built near the Tiber River, the building has an unforgettable feature—its inlaid marble. One room was exquisitely decorated. The floor swirled with designs crafted from red, green, and honey-hued marble. Analysis showed that the marble was imported from Tunisia, Egypt, and Sparta. 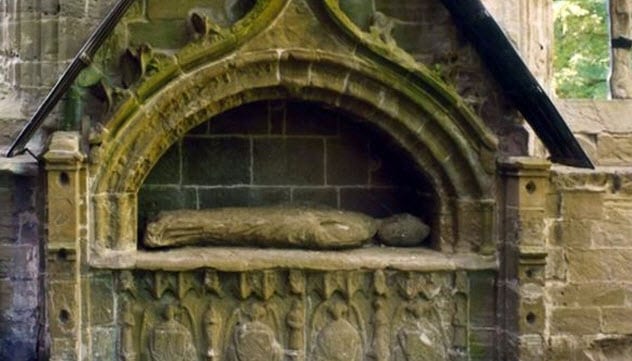 Dunkeld Cathedral stands in Perthshire, Scotland. The oldest-surviving sector was built in the 1200s. But its history goes as far back as AD 849 when the relics of St. Columba were delivered by a king.

In 2018, conservationists decided to spruce things up a bit. They got a delightful surprise when they worked on the tomb of Bishop Cardeny. Appointed in 1399 by Pope Benedict XIII, Cardeny became the cathedral’s longest-serving bishop.[3]

During the renovations, the team found unknown carvings. Numbering about a dozen, they hid near the back of the tomb, which faced the wall. There were no records of any of them.

Some depicted elaborate human figures seen again for the first time in 600 years. The stone carvings were exciting for an additional reason. Their positions suggested that the tomb was not in its original place. Why somebody felt the need to move the bishop’s final resting place remains a mystery. 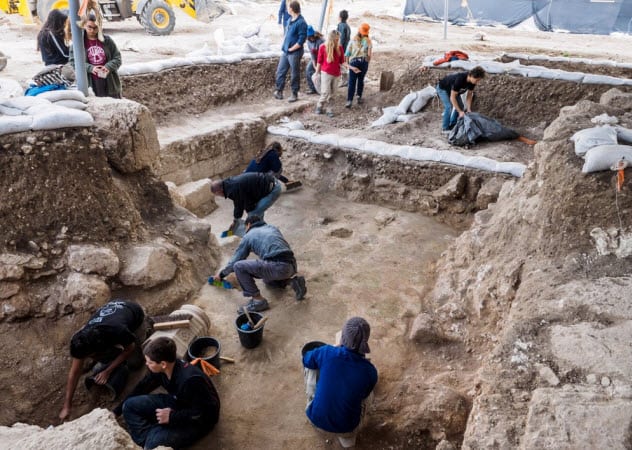 During the fourth century, Christianity spread throughout Israel. The early churches were often linked to biblical locations or the graves of martyrs and saints.

In 2017, archaeologists were working in the city of Beit Shemesh when they found ruins tentatively connected to the biblical fight between David and Goliath. The location of the famous duel was said to be the nearby Ella Valley.

The ruins belonged to a church and monastery, both around 1,500 years old. The surviving architecture included walls with impressive stone masonry, marble window screens, and a pillar base. The marble appeared to have been imported from Turkey.

The complex ranks as the region’s biggest church and is noteworthy for its excellent state of preservation. Among the best finds was a mosaic floor. The elaborate design displayed fruit, leaves, and birds. The size of the building and the art suggest that the church was wealthy, but then, for unknown reasons, it was abandoned during the seventh century.[4]

6 Oldest Monks In The UK 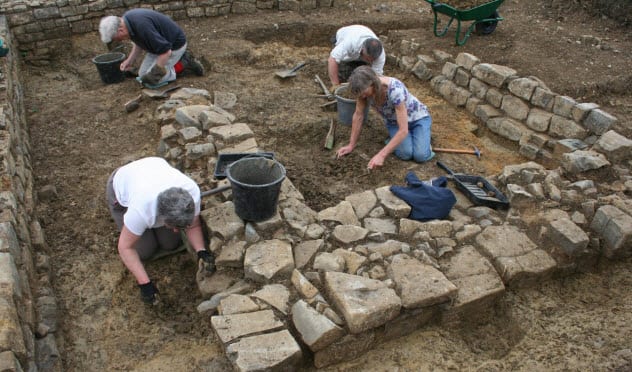 In the 1880s, ruins were found in Somerset that belonged to the medieval Beckery Chapel. A second excavation in the 1960s unearthed around 60 bodies. Only one belonged to a woman, which supported the belief that this was a monastic cemetery.

In 2016, the technology arrived to date the remains. Several individuals were tested with carbon dating, and the results surprised everyone. The earliest bones were buried between AD 406 and 544. This was much older than anticipated. In fact, archaeologists fully expected the graveyard to be medieval as the chapel hailed from this younger era. This also killed another assumption that the men belonged to a monastic group with later Saxon connections.[5]

Either way, the skeletons represent the oldest monks from the United Kingdom. The graveyard also showed that the monastery was used for some time. People were buried there from the seventh to the ninth centuries. The Viking hordes overran Somerset in the ninth century, which could be why there were no more monks. 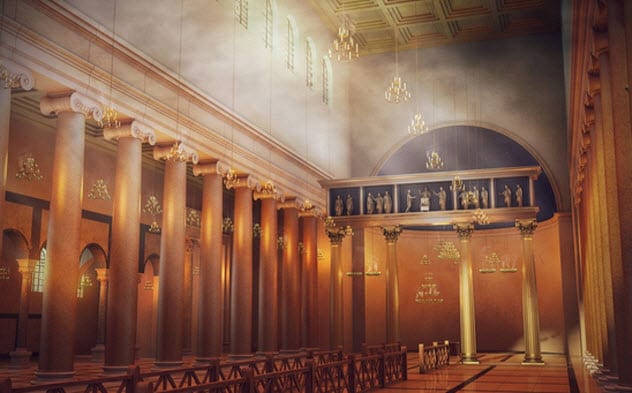 The world’s first cathedral is the Basilica of St. John Lateran. It was raised in Rome during the 17th century. The cathedral was also the youngest of several structures built on top of one another.

Underneath was another basilica that was built on the order of Emperor Constantine during the fourth century AD. Constantine’s chapel stood on military barracks, which housed elite cavalry soldiers. The final layer, which was underneath the barracks, revealed villas decorated with grand frescoes.[6]

It was inevitable that archaeologists would want to worm their way down. Recently, a team bellycrawled deep underneath the cathedral. They went down tight tunnels and worked in half-hour shifts to avoid getting stifled. They even dragged laser equipment along.

While they scanned the levels, their new finds included military graffiti on the older villa ruins. Finally, a 3-D reconstruction revealed that the barracks and Constantine chapel were both large complexes. The military structure also matched identical barracks found nearby.

As it turned out, both belonged to the same cavalry unit. But Rome’s leadership kept them separate to prevent the soldiers from conspiring against the emperor. 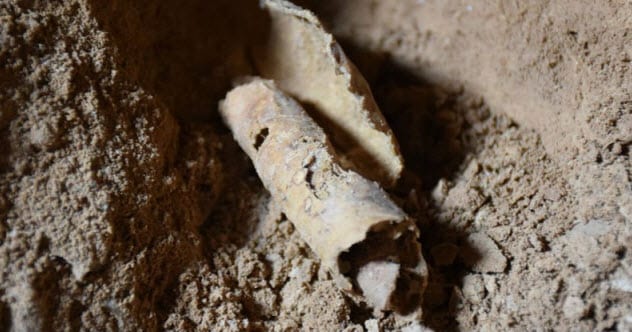 After start-up donations of $500 million, the Museum of the Bible raised a few eyebrows. A year later in 2018, they made an announcement that once again highlighted the young but controversial museum in Washington, DC.

Several of their most priceless artifacts were fakes. More precisely, five fragments of the Dead Sea Scrolls. The true scrolls number around 900 rolls and 50,000 pieces. They hold the earliest text from the Hebrew Bible. The third-century BC work is also older than the Old Testament. Collectors are willing to shell out huge amounts, and this lucrative need is often satisfied by forgers.

In 2017, an expert expressed his doubts over the museum’s collection. High-tech tests probed the paper, ink, and sediment on the artifacts. The results showed that the museum had been duped—at a great loss. The amount paid by the institution for the five fragments is not known, but it was likely in the millions. Worse, the museum’s remaining seven fragments might also not be authentic.[7] 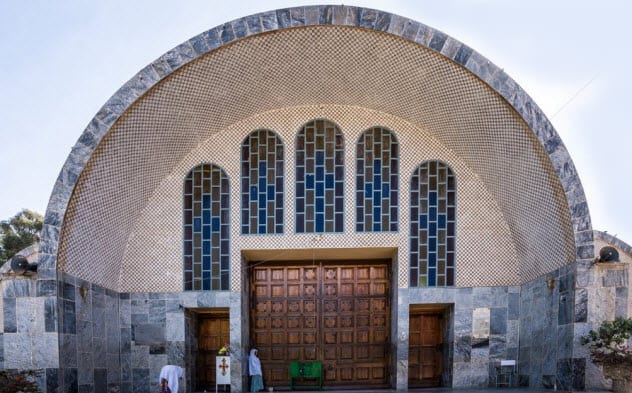 An ancient legend holds that the Ark of the Covenant is in Ethiopia. This chest allegedly contains ancient tablets inscribed with the Ten Commandments. For centuries, the Church of Our Lady Mary of Zion in Aksum claimed to hold the priceless artifact. However, the priests refused to show it to anyone.

In 2018, researchers learned of an interesting twist. Ethiopia was invaded by the Italians in the 1930s. When the Italians declared war on the United Kingdom, British troops arrived. Curious about the ark, Englishman Edward Ullendorff forced his way into the church with a unit of soldiers.

Later, Ullendorff became a professor of Oriental and African studies. Although he died in 2011, Ullendorff had given an interview to the Los Angeles Times a few years earlier. He had also told a colleague about what he had seen.

Ullendorff said that the Aksum artifact was old but not the biblical ark that had once stood in King Solomon’s Temple. It was a medieval replica. Previously, Ullendorff had chosen to stay silent because his work kept him in Ethiopia. Insisting the ark was fake would have killed his career in the country.[8] 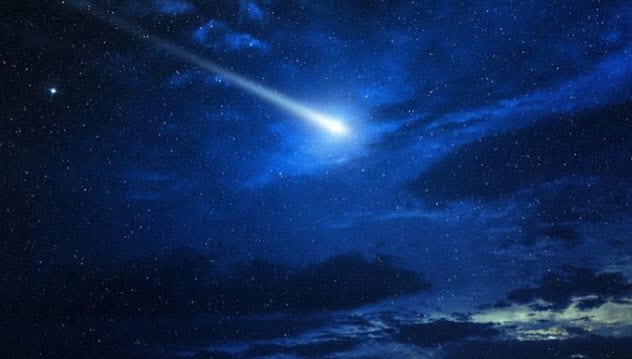 The city of Tall el-Hammam resides in Jordan. Some scholars believe it was the biblical Sodom, said to have been destroyed by God. Excavations found that a devastating event had hit the city and surrounding area.

Tall el-Hammam’s walls measured 2.5 kilometers (1.6 mi) long, 15 meters (50 ft) high, and 30 meters (100 ft) thick. They were destroyed in an instant. Thousands probably died as communities were obliterated. Nobody farmed the land for 700 years. This was strange for a water-rich area.

According to a 2018 study, the terrifying event was a meteor. Evidence suggested that one exploded in the air around 3,700 years ago. The resulting shock wave was scorching, destroying around 500 square kilometers (193 mi2). It scattered sulfates and salts, which prevented farming. Wall damage was consistent with the direction of the blast, and glass formed during the extremely hot, short event.

Even the Bible’s description fit with an airburst: “Then the Lord rained down burning sulfur on Sodom and Gomorrah. Thus He overthrew those cities and the entire plain, destroying all those living in the cities—and also the vegetation in the land.”[9] 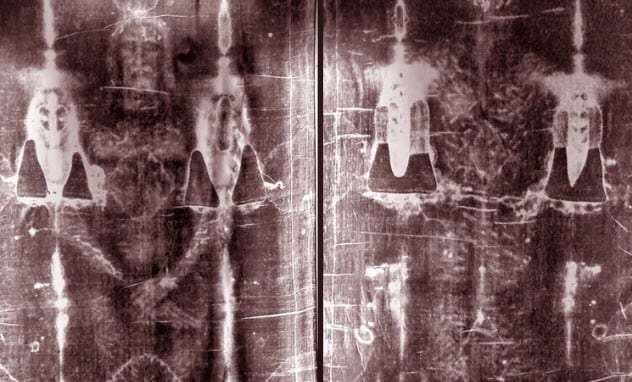 The Shroud of Turin is believed by some to be the burial cloth of Jesus. The linen wrap resides at the Cathedral of Saint John the Baptist in Italy. Measuring 4.4 meters (14 ft) by 1.1 meters (4 ft), it bears a startling image—a man with crucifixion wounds. In 1988, carbon dating suggested that it was created during AD 1260–1390, but many refused to admit the relic was a hoax.

In 2018, forensic techniques focused on the bloodstain patterns. Only one wound’s blood was consistent enough to be “real”—the spear wound on the chest. The rest showed glaring inconsistencies.

None matched the expected stain patterns from somebody who had hung on a cross before being placed in a grave. Blood rivulets on the right hand could only have happened if the person’s arms were at a 45-degree angle. The forearm stains showed vertical arm positions. To hold the arms in both positions at the same time is physically impossible.

The blood on the Shroud of Turin was handmade by an unknown medieval artist.[10]