When asked to picture a member of the armed forces, your mind likely immediately jumps to the image of a hardened soldier with a steely gaze coldly clutching a rifle. It’s easy to forget that many soldiers are actually little more than teenagers when they’re sent to war, which is probably why we have so many stories about soldiers acting like big kids.

10 Flying The First Jet Planes In A Gorilla Mask 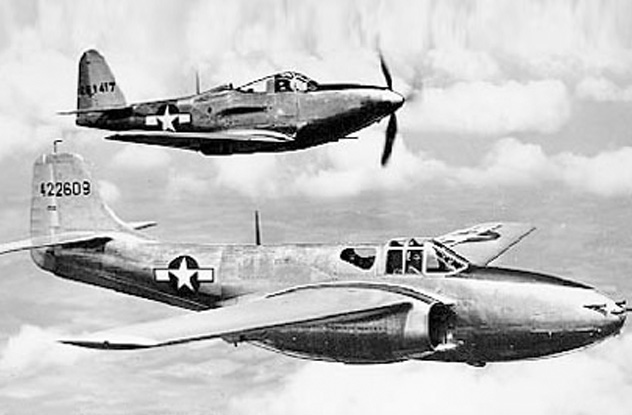 Pilot Jack Woolams worked for Bell Aircraft from 1941 right up until his untimely death in 1946. He quickly rose through the ranks and was ultimately promoted to the experimental research division. There, he flew several untested supersonic planes like the Bell X-1, one of the first vehicles to ever to reach speeds over 1,600 kilometers (1,000 mi) per hour.

While flying the highly experimental P-59 jet, Woolams decided to wear a bowler hat and a gorilla mask and to smoke a comically large cigar. Unlike virtually every other plane in the sky at the time, the P-59 jet had no propellers, making it look like it inexplicably hovered in midair. The poor rookie pilots who watched it fly beside them didn’t just have to marvel at how the magical contraption stayed afloat—they had to see it flown by a smoking gorilla. 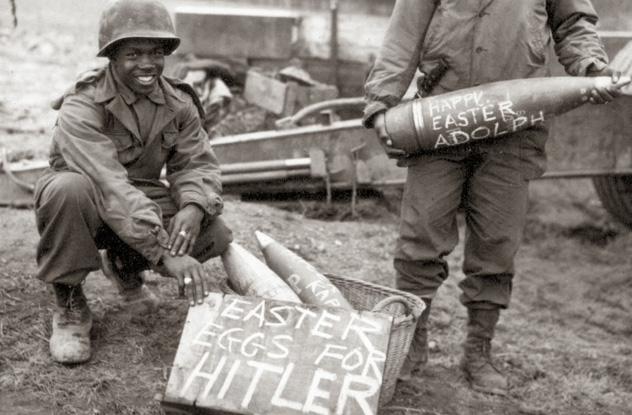 Few things are more impersonal than bombing someone from miles away. You don’t even need to see a person to wipe them off the planet—and the target won’t even realize a bomb is heading their way until they’ve been blown to pieces.

This is perhaps why some World War II soldiers decided to add a little personal touch to the mayhem. They wrote little messages onto artillery shells before firing them, messages such as “Easter Eggs For Hitler.”

The practice of writing stupid messages on missiles dates all the way back to history’s earliest recorded conflicts. For example, the British Museum currently houses sling bullets from Greek antiquity with the word “catch” crudely etched into the metal. Stones from other areas of the world have been found with carved insults ranging from “take this” to “for Pompey’s backside.”

The weapons of war may have changed, but the minds of those using them sure haven’t. 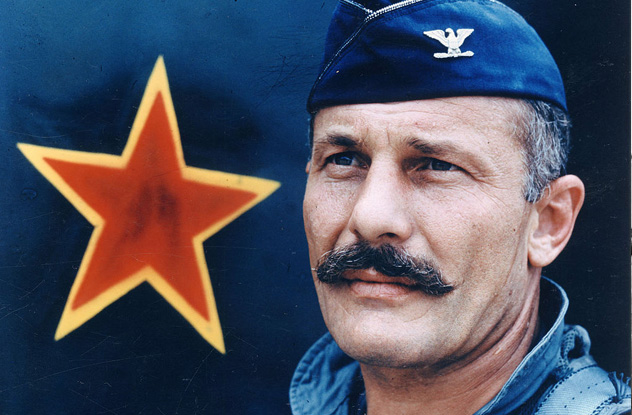 As manly as mustaches are, they can be grown for exceedingly childish reasons. For example, during the Vietnam War, legendary fighter pilot Robin Olds grew a comically huge and gloriously trimmed handlebar mustache just because the Air Force grooming regulations said that he couldn’t.

Though the moustache directly violated Air Force rules, Olds’s superiors found it so funny that most of them were fine with letting him keep it. This, in turn, inspired dozens of other pilots. All grew huge mustaches to annoy superiors—who actually just found the whole thing hilarious.

7 Learning To Fly Again, For A Bet 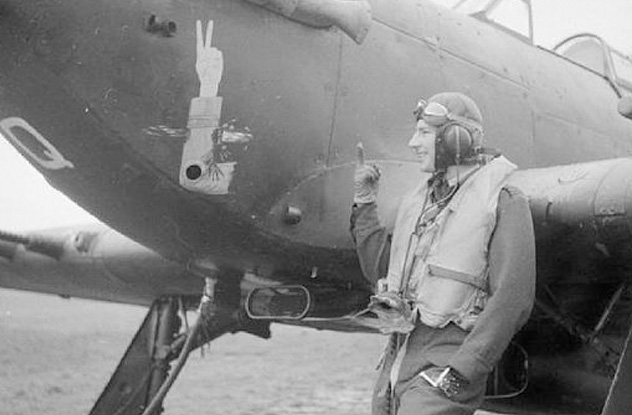 In 1941, British flying ace James MacLachlan was struck by enemy fire during a dogfight with a Nazi pilot. He crashed, and though medics saved his life, they had to amputate his left arm.

MacLachlan was young and fiery tempered, and the loss of his arm only spurred him to kill Nazis even harder. When a nurse lamented that he’d never fly again, MacLachlan turned to her and said, “Wanna bet?” He then wagered that he’d be back to flying within a fortnight.

Fourteen days went by without the man flying, so he technically lost the bet. But on Day 16, MacLachlan was back behind the controls of a fighter plane. He’d recovered so quickly that by the time the news of the crash and amputation reached his mother, he was already flying another plane.

Maclachlan wasn’t done being a big kid yet. When the time came to decide what livery he wanted on his plane, he decided on a picture of his own severed arm giving the V-sign. He’d lost his arm but not his sense of humor. 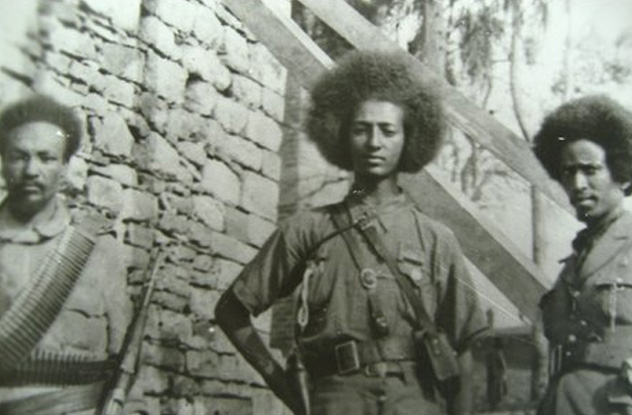 Rather than being offended, some African soldiers decided to use this bit of knowledge to thoroughly scare Japanese captives. They pretended to eat human flesh in front of the prisoners, presumably rubbing their bellies and pointing hungrily toward the bound men.

They hoped that by doing this, the Japanese who escaped would tell all their friends that they were fighting a bunch of mighty cannibals who “particularly enjoyed eating Japanese flesh.” 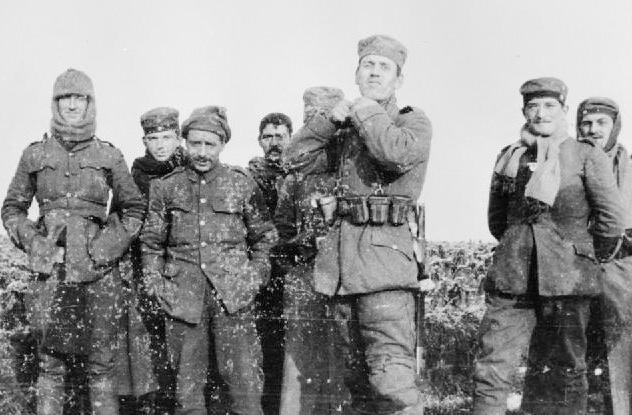 The Christmas Truce is probably one of the more heartwarming stories to come from World War I. A few days before Christmas in 1914, a group of German soldiers fighting in the trenches sent word to the English saying “If you don’t fire on Christmas day, neither will we.” When the day rolled around, Englishmen across the Western Front nervously looked over their trench to see Christmas lights and singing Germans. Thousands of men from both sides ventured into No Man’s Land to collectively bury their dead and share solemn handshakes over glasses of wine.

We’d be tempted to say that this was a very adult thing for the men to do, but the soldiers then decided to play soccer. The language barrier kept them from setting formal rules, but as soon as one random soldier kicked a ball into the middle of No Man’s Land, everyone just started running around trying to kick it.

After New Year’s Day, fighting resumed, and over the course of the next four years, millions died horrifically. It seems that if everyone were a little bit more child-like, war wouldn’t be an issue. 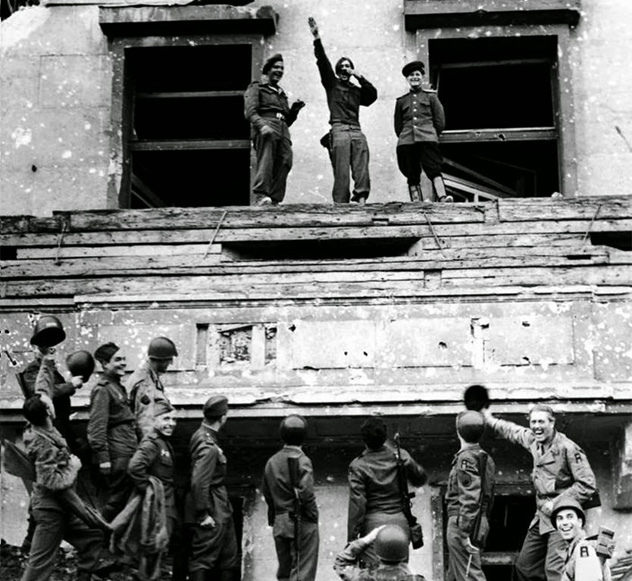 You’d think that soldiers in the middle of World War II would be too drained to enjoy something as childish as staging silly photos. Unless, of course, the soldiers are standing atop the newly liberated German Chancellery in Berlin, and they find the perfect opportunity to make fun of Adolf Hitler.

One of the first things Allied soldiers did after liberating the building was climb to Hitler’s infamous balcony and take a photo mocking him. All soldiers in the photo are either laughing or grinning at the camera. The man playing the part of Hitler, American corporal Russell M. Ochwad, even goes so far as parting his hair in a Hitler-esque fashion to show that he’s really committed to the role.

But when it came to celebrating the downfall of the Nazi regime, nobody could hold a candle to the Russians . . .

3 The Russians And The Reichstag 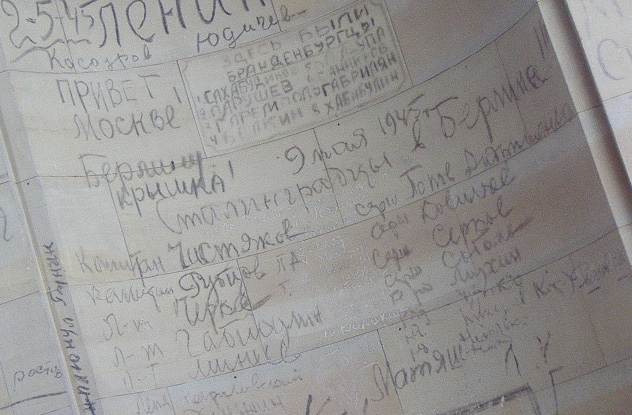 For many, the image that really symbolized the end of World War II was the picture of a Soviet soldier waving his flag over the recently assaulted Reichstag, which housed Berlin’s Parliament. But once the battle was over, Russian troops positively covered the building’s walls in obscene graffiti.

The graffiti, some still there even today, pricelessly represents the voice of the common soldier. Luckily for us, the common soldier apparently had a terrible case of potty mouth, so there’s now a big building in Germany with the words “I f—k Hitler in the arse.” 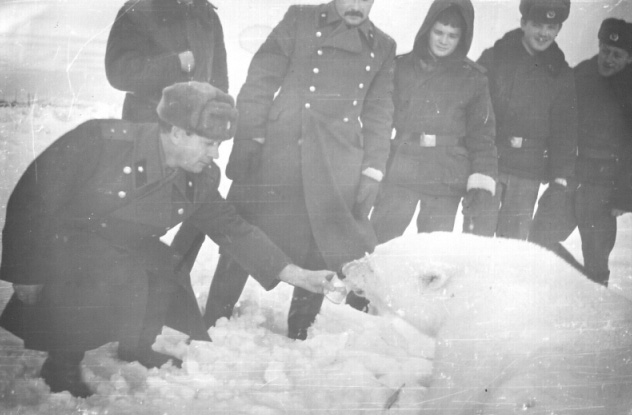 Russian soldiers operating in the bitterly cold Chukchi Peninsula would often put out tins of condensed milk for the local polar bears. Just like kids who can’t resist feeding the mangy neighborhood cat, encouraging it to soil your garden, they’d routinely feed any polar bears they happened across during missions, apparently sucked in by the bears’ cuteness.

Eventually, the bears of Chukchi got so used to being fed by humans that soldiers could pose for photos with them. In one photo, a soldier rubs noses with a cub just inches from its giant mother, too delighted at getting to touch the adorable creature to consider any possible danger.

1 Laughing In Their Killers’ Faces 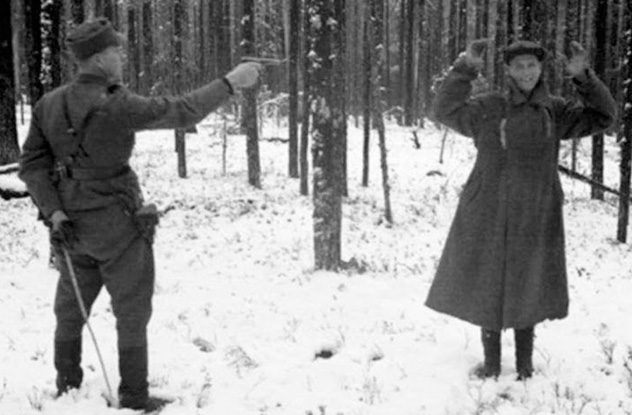 In these graphic images of an unnamed Russian spy’s execution, the cavalier soldier openly laughs in the face of his killer. We don’t know why the soldier is laughing. But it’s clear that some people, just like children, can find humor in even the worst of situations. In his last few moments, this soldier literally has the last laugh, and that’s amazing.

You can find a similar reaction from French Resistance member Georges Blind, sent to a mock execution to intimidate him and his comrades. George, staring down a firing squad, looked straight ahead and smiled like he was posing for a vacation photo. The Germans did eventually kill the man by sending him to a concentration camp, but the image of his winning smile will last an eternity longer than their poisonous ideals.

Karl Smallwood is a freelance writer who can occasionally be found writing stupid things across the Web. He’s also on Twitter and Tumblr if you’re into that sort of thing.