Amyotrophic lateral sclerosis (ALS) is a degenerative condition of the nerve cells of the spinal cord and brain. It is a rapid and insidious killer—patients go from initial symptoms to death in typically just over three years. The average sufferer’s neural pathways eventually deteriorate until the point of respiratory failure.

In 2014, name recognition for the disease reached an all-time high, and fundraising efforts are breaking records, but the average person still knows very little about ALS.

Athletes are at a higher risk for ALS than the general population. Indeed, ALS is often referred to by its more colloquial name, Lou Gehrig’s disease, after the legendary first baseman for the New York Yankees.

For over 50 years, Gehrig held the record for the most consecutive games played, an accomplishment that earned him the nickname “The Iron Horse.” Yet even his stern constitution couldn’t save him from ALS, and he said goodbye to his fans at Yankee Stadium on July 4, 1939. In his famous farewell speech, he said that despite his grim diagnosis, he felt like “the luckiest man on the face of the Earth.” Lou held on for only two more years, dying of ALS on June 2, 1941 at 37 years of age.

Sports is definitely a factor in neurodegenerative disease. A CDC study following 3,439 NFL players indicates that football players suffer ALS at a rate of about four times the US national average. Concussions may play a significant part in the development of ALS. Gehrig suffered multiple concussions throughout his career (the MLB didn’t introduce batting helmets until the year that he died).

In recent years, the NFL has been moving toward regulations to keep players from getting brain damage from accretive concussions. After linebacker Junior Seau (rumored to have had 1,500 concussions during his career) committed suicide, his brain was studied and shown to have had chronic traumatic encephalopathy, a neurodegenerative condition similar to ALS.

This phenomenon is not limited to just the United States. Italian soccer players have also exhibited a strong propensity toward developing ALS—six times that of the average Italian. According to one theory, this is due to the average player’s frequent contact with ticks in the grass. 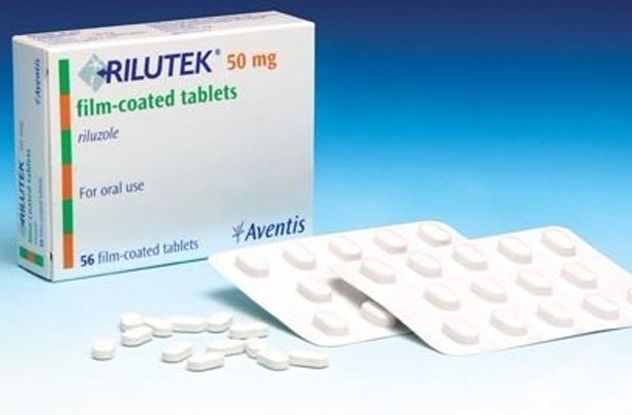 ALS affects only 2 out of every 100,000 people. This makes it a so-called orphan disease, one that pharmaceutical companies have yet to adopt as a major research subject because they’ll make no real money from it. More prevalent conditions, from depression to erectile dysfunction, are the ones that bring in billions in profits.

As a result, few treatment options exist. There is only a single drug on the market for ALS, a substance called Riluzole, approved by the FDA back in 1995. The drug blocks toxin-sensitive sodium channels in neurons, slowing down the disease’s progression. Riluzole costs approximately $10 a tablet, and its effectiveness is debatable, usually extending the life of ALS sufferers by only two or three months.

8The Mystery Of Stephen Hawking’s Survival 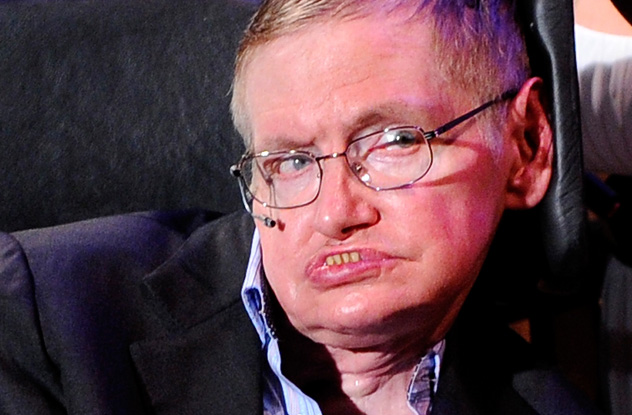 By the far the most famous living sufferer of ALS, Stephen Hawking is a million-to-one anomaly. The brilliant theoretical physicist was diagnosed when he was just 21 years old and was told that he had little time left. Over half a century later, he is still alive, utterly defying the odds. In the years since his diagnosis, he has made countless contributions toward human understanding of the universe.

Hawking’s doctors do not discuss the specifics of his condition, so we don’t know precisely by what mechanism he continues to soldier on. ALS affects the motor neurons that control the diaphragm and the muscles involved in swallowing, so sufferers usually die from respiratory failure or suffer malnutrition and dehydration. According to Leo McCluskey, medical director of the ALS Center at the University of Pennsylvania, “If you don’t have these two things, you could potentially live for a long time—even though you’re getting worse.”

In recent years, Hawking has been on a ventilator full-time, but he continues to be active, even making voice guest appearances on television shows like The Big Bang Theory. Being wealthy and venerated, Stephen Hawking has had some of the very best medical care in the world, which has certainly contributed somewhat to his longevity. Yet the disease has ravaged his body. He is almost completely paralyzed and can communicate about one word per minute using a device that reads the movement of his cheek. 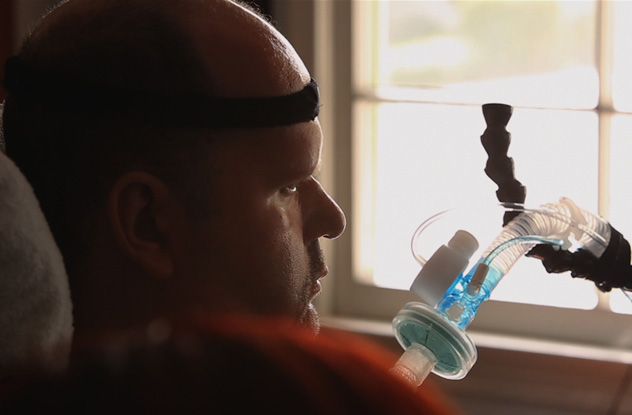 Stephen Hawking isn’t the only famous person with ALS attempting to make the best of a bad situation. Scott Lew is a screenwriter with several works under his belt, including 2013’s Sexy Evil Genius. He is in the latter stages of the disease and can only move a few muscles in his face and eyes. It takes assistants four hours just to get him out of bed and ready to work for the day.

Scott was the subject of the short documentary Jujitsu-ing Reality, a powerful and inspiring look at continuing to be productive while living with ALS. It has screened in film festivals around the world.

Like Hawking, Lew has defied the odds, living with the disease for 11 years as of 2014. He maintains an active blog full of poetry, video clips, and private musings. In one essay, titled “A Good Night With ALS,” he describes his condition as “being buried alive in your own body” but goes on to describe the beauty of life, claiming: “Every day is a chance to have fun and be creative.” 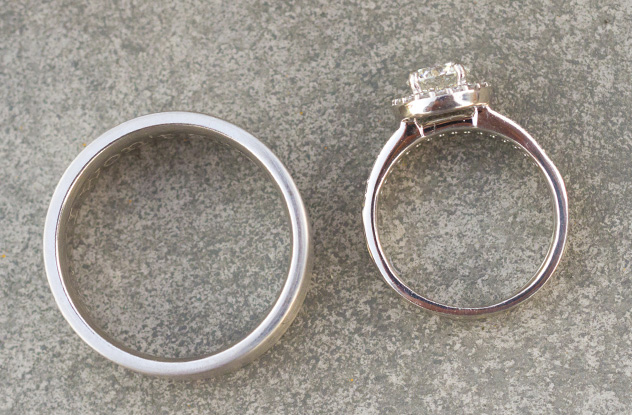 ALS is genetic in 5–10 percent of cases, but in most instances, its cause is a mystery. There are cases of married couples where both partners come down with the disease, which is odd because ALS is not contagious. Researchers believe these cases are likely just coincidences, but no one really knows for sure. In some instances, one spouse was not diagnosed until years after the partner’s death.

At least 20 known cases of conjugal ALS have cropped up around the world, including one each from India and Spain, two from Brazil, three from the United States, four from Italy, and nine from France. All the couples were together for at least a decade before their diagnosis.

Although athletes have shown a significantly higher rate of ALS than people in other fields, it affects people in a wide variety of professions, from musicians like Leadbelly and Charles Mingus to politicians like former senator Jacob Javits. It is even rumored that Chairman Mao Zedong died of ALS. But perhaps the most ironic victim of the disease was Dr. Richard Olney.

Olney was a pioneer in the study of ALS, establishing the ALS Treatment and Research Center at the University of California, San Francisco. Then in 2004, Olney’s physical state began to decline. By 2005, one of the world’s foremost experts in ALS was certain that he had the disease himself.

Olney lived for eight years with ALS, only experiencing the most catastrophic symptoms toward the very end. Even up to his last days, he continued research and worked on papers with the assistance of his son. He also did interviews to direct as much attention to the cause and his research center as possible. Olney died on January 27, 2012, aged 64. 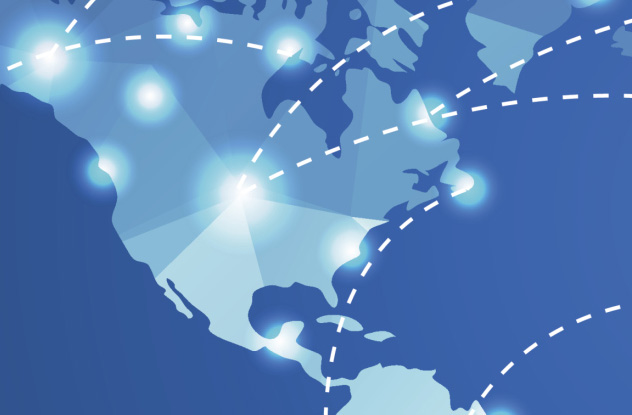 Though the medical community does not recognize a set cause of ALS, intriguing patterns indicate that environmental factors play a role. Strange geographic clusters of the disease have popped up. Three people who were all Ashkenazi Jews developed ALS in Montreal within an 18-month timespan. They all lived in one apartment building. In another case, four people in rural South Dakota (three of whom lived within a couple miles of each other) developed ALS within a decade.

Soldiers returning home from serving in the 1991 Gulf War have also demonstrated an unusually high degree of ALS. These soldiers could have come into contact with any number of chemicals during the war, including nerve agents, pesticides, and radioactive substances. Certain countries, such as Mexico, Italy, and Poland, report lower-than-normal levels of ALS. 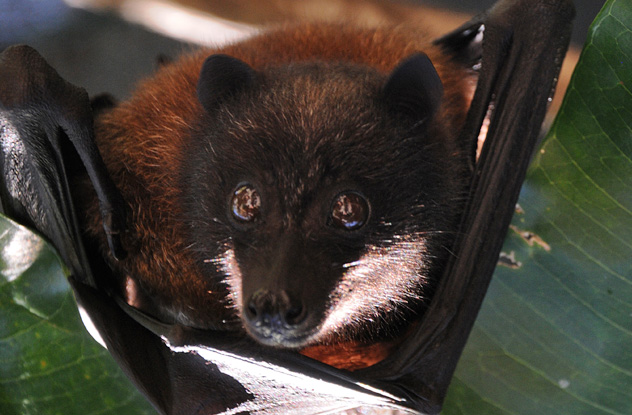 Seafood has long come under fire for its high mercury levels, which are expected to climb further in the coming years. The mercury levels are so high that many health professionals warn against pregnant women eating more than small portions of fish. But an even worse substance may lie in fish—a toxin called beta-methylamino-L-alanine (BMAA). The compound occurs naturally, created by algae found in soil and bodies of water.

While studying ALS, neurologist Elijah Stommel became intrigued with clusters in certain geographic areas. When he cross-referenced the addresses of 200 of his patients, he found that many were located in groups around bodies of water. The most thickly affected area was Mascoma Lake in Enfield, New Hampshire.

BMAA may also have caused the ALS-Parkinsonism-dementia complex (dubbed Lytico-Bodig disease) that hit the Chamorro people of Guam in the years following World War II. The Chamorro were fond of eating a local fruit bat, which in turn fed on cycad seeds that produce BMAA. The BMAA became concentrated within the bloodstream of the bats, making the Chamorro dozens of times more susceptible to developing ALS than the rest of the world’s population.

2The Limits Of The Ice Bucket Challenge 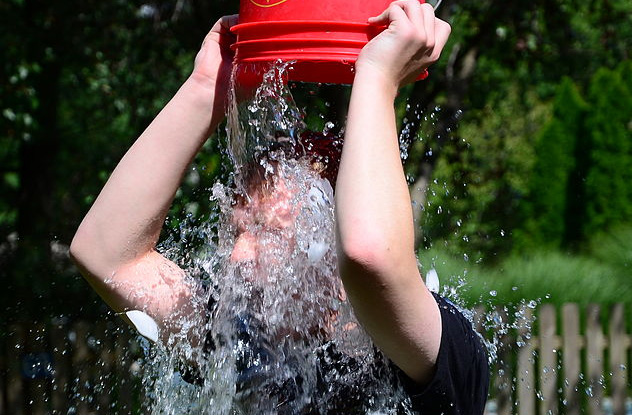 Until a few months ago, a good number of people hadn’t even heard of ALS. That all changed when the Ice Bucket Challenge went viral in the summer of 2014. Exactly who originated the challenge seems unknown, but versions with cold water can be traced to 2013. As of this writing, the ALS Association has raised over $100 million, a 3,500-percent increase in donations over the same period last year.

Like all viral trends, the ice bucket challenge will soon dry up, leaving researchers not too far from where they started. According to University of North Carolina bone marrow researcher Dr. Jonathan Serody, “If a million people would donate $100 a year for 30 to 40 years, you might get a breakthrough for ALS. These flash-in-the pan things that will go away after a few months will not help ALS in the long run. Researchers need more dependable money.”

The US government, through the National Institutes of Health, is by far the largest contributor to medical research in the world. It has dramatically slashed its budgets over the years, and ALS has taken a hit—the NIH provided $59 million for ALS research in 2010 but has reduced its contribution by one-third in the last four years.

https://www.youtube.com/watch?v=yIpIClC8bBA
As viral trends go, the ice bucket challenge would seem about as harmless as they could get. However, some participants have attracted criticism for taking part for fun rather than for charity. Celebrities in particular have been reviled for participating as a mechanism of self-promotion. Surprisingly, such figures as Charlie Sheen and Jackass actor Steve-O (two gentlemen not known for taking much of anything seriously) have been noted for their more pragmatic outlook on the topic, stressing fundraising over awareness.

Others have criticized the challenge for wasting clean water in a world where many people lack access. This criticism is largely misplaced (water-rich areas don’t help or hurt drier areas by varying their own consumption; the challenge used an insignificant amount of water compared with other processes), but it grew into a particularly hot button issue in California, which has suffered from serious drought.

Movie star Matt Damon addressed the issue of wastage by doing his ice bucket challenge with water collected from his own toilet. It’s unclear how much water he saved doing it this way, but the process gave him the opportunity to promote a charity of his own. Damon said, “Because I co-founded Water.org, and we envision the day when everybody has access to a clean drink of water—and there are about 800 million people in the world who don’t—dumping a clean bucket of water on my head seemed a little crazy.”