Strange conspiracy theories about the music industry have been around for a long time—just ask Elvis, Tupac, and Michael Jackson, who are all still alive and living on an island somewhere. And thanks to the rise of the Internet, the theories about contemporary artists are arguably even crazier.

10Jay-Z Is A Time-Traveling Vampire 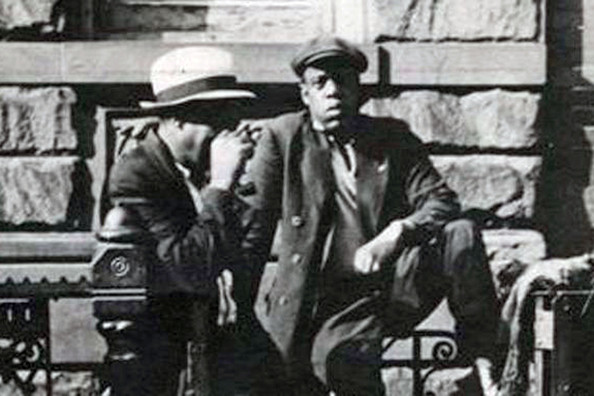 A man resembling Jay-Z’s mysterious appearance in a photograph from the 1930s has conspiracy theorists convinced that the rapper has the ability to travel back in time. The picture, taken in 1939 by legendary American photographer Sid Grossman, depicts “Jay-Z” looking into the camera while sitting on a metal railing in front of a building.

The photo was unearthed by a curator at the New York Public Library in 2013 and quickly became the subject of conspiracy theories, including the suggestion that Jay-Z journeyed back to 1939 to do research for the soundtrack to The Great Gatsby. The movie is actually set in the 1920s, but time travel is presumably an imperfect science.

However, some skeptics have scoffed at the time travel theory, insisting that Jay-Z is actually a vampire and could easily be over 1,000 years old, thus explaining his eerily extensive knowledge of New York City. Of course, Jay-Z wouldn’t be the first celebrity to be outed as undead—just ask the antiques dealer who produced photographic evidence that Nicolas Cage has been alive since the Civil War.

Jay-Z’s wife, Beyonce Knowles, has also attracted her fair share of wild accusations, with conspiracy theorists queuing up to declare her everything from an Illuminati puppet to a Satanist. Perhaps slightly more grounded is the theory that the singer faked her recent pregnancy. When the songstress sat down on a chair during a televised interview, many gasped as her pregnant belly seemed to fold in on itself, leading to theories that Beyonce was wearing a prosthetic baby-bump.

The proof for the conspiracy is as follows: In 2011, Beyonce announced her pregnancy the old-fashioned way—by rubbing her stomach during the MTV Video Music Awards. But just a week before the ceremony, she had performed at another venue with no sign of a pregnant belly. Beyonce also clearly didn’t think her fake pregnancy through by showing up at the VMAs with a pronounced tummy, even though she was supposedly only two months pregnant.

Furthermore, little Blue Ivy Carter was apparently conceived in Paris during April 2011. This would mean that Beyonce should have been at least four months pregnant at the VMAs as opposed to two months. Beyonce truthers believe that the singer used a surrogate, since she didn’t want to ruin her body during pregnancy.

As if that wasn’t enough, many believe that Blue Ivy’s unusual name was chosen by the Illuminati themselves. If you reverse the words Blue Ivy you get “Eulb Yvi,” which conspiracy theorists claim means Lucifer’s Daughter in Latin (it doesn’t).

8Lorde Is Not A Teenager 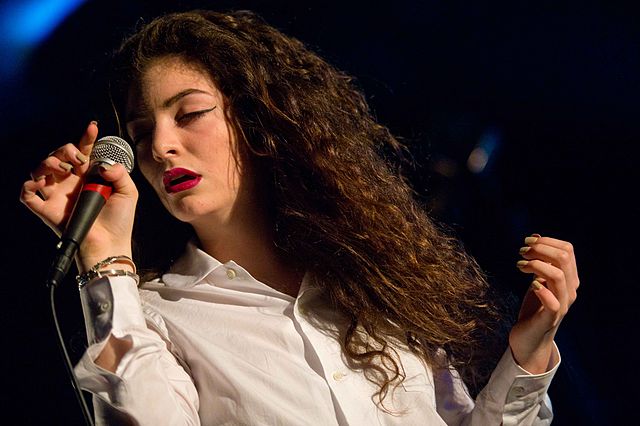 In 2013, the 16-year-old Lorde exploded onto the music scene with her smash hit “Royals.” But some people were more interested in her age than her music. When she appeared on TV, many viewers just couldn’t believe that she was a teenager. Social media soon began buzzing, with many flat-out refusing to accept that she wasn’t at least 40 years old. A journalist set on debunking the rumors even parted with $17.02 to obtain the singer’s birth certificate. The document seemingly confirmed that Ella Marija Lani Yelich-O’Connor, also known as Lorde, was indeed born on 7 November, 1996.

But even that might not be enough to persuade the doubters, who can point to Lorde’s own lyrics as evidence—her song “Team” includes the line: “I’m kind of older than I was when I reveled without a care.” Lorde herself doesn’t appear too fazed by all the rumors. In an interview with Vanity Fair she quipped: “Hi, I’m Ella and I’m actually 45.” Classic misdirection.

Aaliyah found musical success at the age of 14, teaming up with R. Kelly to produce the hit album Age Ain’t Nothin’ But A Number. Her success continued throughout the ’90s, including a move into acting with the movie Romeo Must Die. But tragedy struck in August 2001, when the singer was killed in a light aircraft crash after filming a music video in the Bahamas. The plane was said to have been dangerously overweight when it crashed.

Numerous rumors quickly emerged, including the usual insistence that the Illuminati was behind it all. One particularly nasty conspiracy theory claimed that Beyonce Knowles had ordered her rival’s death. Supposedly, Beyonce was jealous of Aaliyah’s success and made sure she was taken out of the picture.

Aaliyah had everything going for her. She had the background—her family was in the music industry and she made her first onstage appearance at the age of nine. She had the connections—R. Kelly, to name one. She was the youngest performer in the history of the Oscars when she sang the theme song for Anastasia during the 1998 ceremony.

At the time, Beyonce was one of the members of Destiny’s Child and could not have foreseen how successful her own career would be. Rumor has it that Beyonce (or her overbearing father) ensured the plane was too overloaded reach its destination. Of course, there is absolutely no proof of this, but the theory persists on the Internet.

6Pitbull Predicted The Disappearance Of MH370

The disappearance of Malaysia Airlines Flight 370 captured the attention of the world. How could such a huge plane have just vanished without a trace? Luckily, many of the Internet’s finest investigators have taken it upon themselves to try and solve the mystery. And some have stumbled onto what they think may be a clue—hidden in a Pitbull song.

Yes, the Miami-based rapper’s 2012 smash hit “Get It Started” has come under scrutiny for such incriminating lyrics as “Now it’s off to Malaysia” and “Two passports, three cities, two countries, one day.”

Conspiracy theorists claim that the two passports mentioned refer to two Iranian passengers subsequently found to have been traveling on stolen passports. The three cities are supposedly the capitals of Malaysia, Vietnam, and China. Some amateur detectives have even claimed that “No Ali, No Frasier, but for now off to Malaysia” refers to one of the Iranians—even though neither of them were named Ali (or Frazier).

5Miley Cyrus Is A Deliberate Distraction

Most people probably wouldn’t associate Miley Cyrus with high-level politics—but most people aren’t Korn frontman Jonathan Davis, who thinks of exactly that whenever he hears the Hannah Montana star’s name

Earlier this year, Davis appeared on the Alex Jones Show to accuse none other than Barack Obama of using Miley as a puppet to distract Americans from what’s really going on in the world. According to the “Twisted Transistor” singer, whenever the President wants to enact some particularly controversial legislation, he manipulates the media to focus on Cyrus’s outrageous antics instead.

As evidence, Davis pointed to the fact that Miley’s celebrated appearance at the VMAs coincided with a new law allowing American citizens to be imprisoned without being formally charged with an offense. Admittedly, Davis has never been a fan of Obama, calling him an Illuminati puppet at a concert in 2011.

4The Real Slim Shady Is Dead 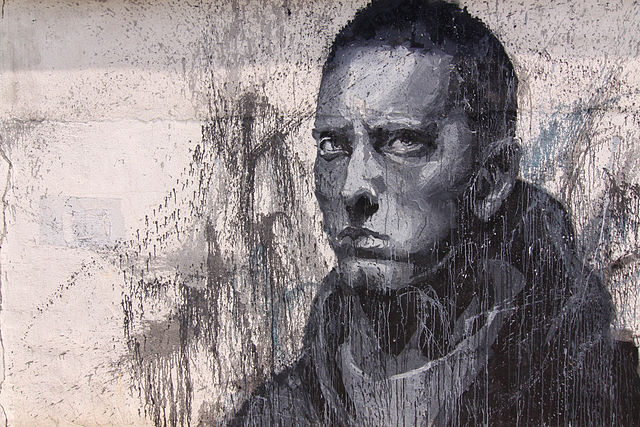 This unoriginal conspiracy theory claims that the real Eminem died a while ago and has been replaced by a double. There have been several Eminem death hoaxes over the years, with the exact time and details of Marshall Mathers’ death varying from theorist to theorist, but they all agree that the real Slim Shady was killed at some point. There is even a budding online community dedicated to proving that the Eminem we see today is not the same one who broke into the music industry with hits such as “Stan” and “Without Me.”

According to posters on the Doppelganger and Identity Research Society forums, the long breaks between Eminem albums show that something is definitely amiss. Further proof for the conspiracy includes photographs of Mathers as a child, which supposedly do not resemble recent pictures of the rapper. Rumors that Eminem was lip-syncing during his much-anticipated performance on SNL have also been taken as proof that the imposter, dubbed “Feminem,” is doing a bad job impersonating him.

3Taylor Swift And The Number 13

Taylor Swift is renowned for her country singing style and for writing songs about her rapidly growing list of ex-boyfriends. But conspiracy theorists have noticed something sinister about America’s sweetheart—she seems to be obsessed with the number 13. It all started when Swift was born on Friday the 13th of December, 1989. Deciding 13 was her lucky number, Swift tried to incorporate it into her life whenever possible. During her childhood, she would choose it as her number during sports. After she became famous, she would write the number on her hand during live performances. Her first album featured 13 tracks and even her Twitter handle has the number in it. One of her songs even “got stuck” at number 13 on the charts.

But what might seem like a harmless superstition actually has a darker meaning—at least according to conspiracy theorists who believe Taylor was bred to join the 13 bloodlines of the Illuminati. Some also believe that when her VMA acceptance speech (on September 13, 2009) was interrupted by Kanye West, it was actually her initiation into the secret society. Swift started out the night in a silver dress, had her speech interrupted, and later emerged onstage with Beyonce wearing red. Since red is supposedly the color of choice for the Illuminati’s pawns, the wardrobe change symbolized the completion of Swift’s initiation.

In December 2011, Rihanna released a music video for her single “We Found Love,” which quickly skyrocketed to the top of anything resembling a chart. The video depicted a passionate relationship descending into drug-fueled abuse. Somehow, a conspiracy theory started floating around the Internet that the video contained a “premonition” of Whitney Houston’s death.

The theory claims that the drug use and domestic abuse shown in the video mirrors what Houston and Bobby Brown went through during their relationship. The video was released only three months before Houston’s body was found in a bathtub. At one stage during the “We Found Love” video, Rihanna sinks into a bathtub, looking completely out of it. This scene supposedly predicted Whitney’s fate.

Shortly after Houston’s tragic death, there was talk of making a movie based on her life, to be produced by Clive Davis. The project never materialized, but the person most likely to have been approached to play the role of Whitney—is none other than Rihanna.

It doesn’t get crazier than this—there are people who firmly believe that Nicki Minaj cannot rap at all. So in order for her to become a superstar, she needed a little help from Jay-Z. Various rap conspiracists have claimed that Hova is doing all the hard rapping work, while Minaj is lip-syncing along to a sped-up recording of his lyrics. As “proof” of the conspiracy, believers point to a slowed-down version of Minaj’s “Superbass” video, which supposedly sounds sort of like Jay-Z.

The video, if not the crazier interpretations of it, has even made an impact on the mainstream media. The CBS News website mused that the two artists did sound alike in certain parts of the song, chalking it up to their shared New York background. The Huffington Post, taking a slightly different approach, decided to lead with a Reddit user’s claim that Minaj “sounds like a gay version of Jay-Z.”

Estelle lives in Gauteng, South Africa. She loves conspiracy theories of any kind.