Antarctica is surrounded by conspiracy theories and ice… lots of ice. Both are unsurprising considering that the continent is the most remote and the least understood on Earth.

It is practically impossible to live there without specialized gear, buildings, and support from humans on a more livable continent. This has made Antarctica the perfect candidate for conspiracy theories ranging from aliens to UFOs, secret government bases, and even some strange pyramids.

Nazis and pyramids: What’s really going on in Antarctica? | Newshub

In 2016, the internet went wild after three pyramids were discovered in Antarctica. The pyramids measured over 1,220 meters (4,000 ft.) tall, making them about 10 times the height of the famous Great Pyramid of Giza in Egypt. This was strange as there is no record that any ancient civilization existed in Antarctica. Besides, such massive construction would have required unbelievable resources and manpower to complete.

Nevertheless, conspiracy theorists jumped on board, claiming that the pyramids were built by some undiscovered ancient civilization that had lived in Antarctica 100,000 million years ago. They say that Antarctica was at the equator at the time, so living conditions were more tolerable. However, they added that the government is hiding information and has even blocked pictures of the pyramids on Google Earth.[1]

Scientists counter that the supposed pyramids are either horn or nunatak mountains. A horn is formed after erosion washes down the sides of a mountain, making it appear like a pyramid. Nunataks are a category of mountain that are so tall that they rise above the permafrost covering Antarctica.

As a result, the so-called pyramids could have only been built by dinosaurs. That is, if they are truly pyramids. However, there is no evidence that dinosaurs built pyramids, either.

9 The Nazis Have A Secret Base In Antarctica 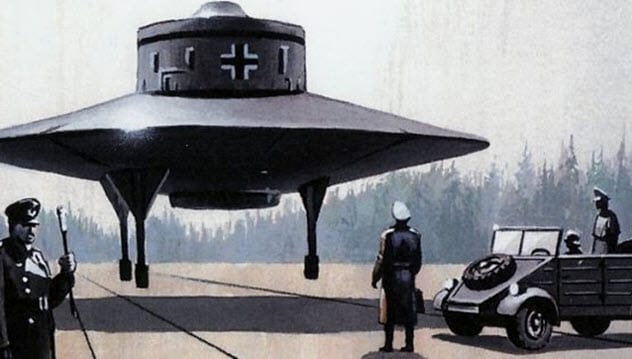 While there, the Nazis supposedly discovered several underground caves and rivers and later converted the largest cave into a secret city where they lived with the Illuminati. Some conspiracy theorists speculate that Hitler fled to this secret base after losing the war.

Believers also claim that the Nazis somehow managed to lay their hands on alien technology at the secret base. They exploited this to build the weapons they tested at the smaller caves.[2]

In truth, the Nazis do not have a secret base in Antarctica. There is no evidence that they made weapons with alien technology or tested any weapon in Antarctica, either. Besides, the Nazis only sent one ship to the region around 1938 in search of new whale hunting grounds. They abandoned the expedition after World War II broke out.

8 The Lost City Of Atlantis Is Under Antarctica 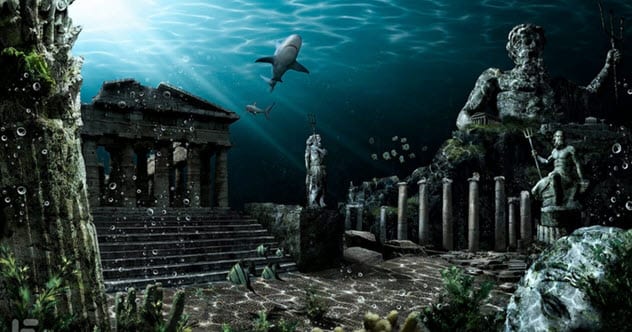 Some conspiracy theorists claim that the fabled Atlantis is under Antarctica. Interestingly, the idea kicked off in the 1950s after Professor Charles Hapgood, a historian, suggested that Antarctica was home to some undiscovered ancient civilization. Hapgood’s belief hinged on the theory that Antarctica was not covered with ice 11,600 years ago.[3]

Conspiracy theorists claimed that Hapgood was right. However, they added that the civilization was actually Atlantis, which remains covered in ice today. In 1995, Graham Hancock asserted in his study, Fingerprints of the Gods, that the people of Atlantis had migrated from Antarctica to found the Aztec, Mayan, and Egyptian empires.

7 Rectangular Icebergs In Antarctica Were Built By Aliens

Flight Over a Rectangular Iceberg in the Antarctic

Scientists have revealed the existence of weird, almost perfectly rectangular icebergs in Antarctica. They are often huge and are sometimes visible from space. The rectangular icebergs look more man-made than natural. It is almost as if they were neatly carved out of a larger iceberg. That is true, except that they are really natural.[4]

Scientists call them tabular icebergs. They are naturally formed when part of an iceberg breaks off from a larger one. However, conspiracy theorists do not believe this. They say that the icebergs were either made by humans or aliens.

Some of them also suggest that it could be a secret government facility. Conspiracy theorists hinge their arguments on the fact that perfect shapes rarely exist in nature, which is true. However, scientists have pointed out that not every corner of the iceberg is usually perfect.

The debate rages on.

6 A UFO Crash-Landed In Antarctica 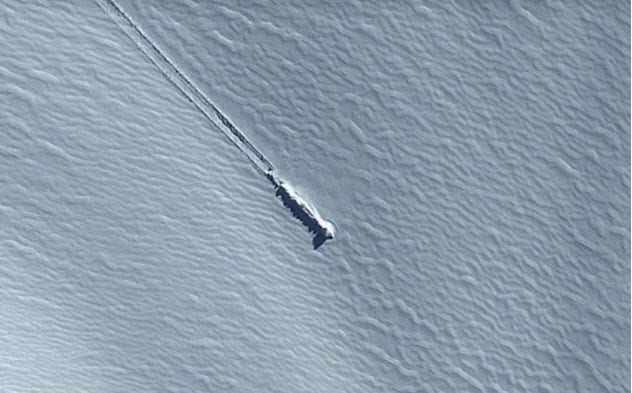 Some conspiracy theorists called “alien hunters” claim to have discovered evidence of an alien UFO that crash-landed in Antarctica. The hunters reached this conclusion after analyzing a suspicious trail, which they found with Google Earth, on the continent’s surface.[5]

The trail starts from what appears to be the collapsed peak of a mountain. This suggests that the UFO hit the peak as it crash-landed. However, geologists don’t agree. They insist that the trail was caused by an avalanche. 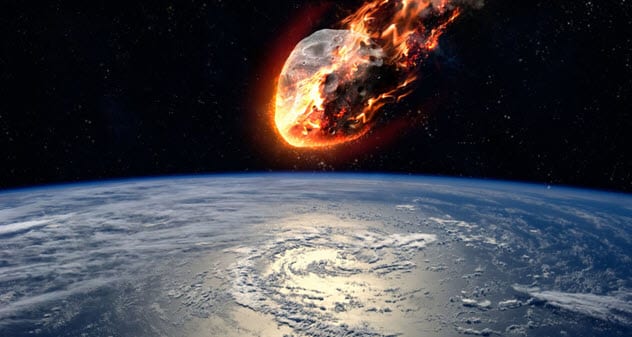 In January 2019, it was reported that scientists from NASA and the German Aerospace Center had discovered a crater deep under the permafrost of Antarctica.

Although it was only recently reported, the crater was first discovered during an analysis of satellite images of Antarctica in 2006. Scientists think the crater was formed by one of the asteroids that hit the Earth millions of years ago and caused the extinction of the dinosaurs.

4 Google Knows Something We Do Not Know About Antarctica 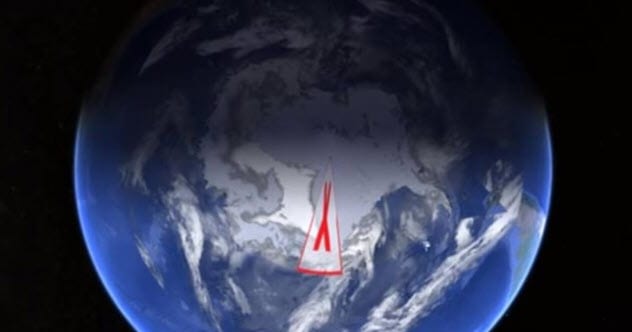 In March 2018, a pro–conspiracy theory YouTube channel claimed that Google knows some secrets about Antarctica. And it seems like Google is doing all it can to hide that information from us. However, a rebellious Google employee is supposedly trying to reveal the conspiracy to us.

The presenter of the YouTube channel said that a red cross appears whenever he hovers over a location in Antarctica—but only when he has enabled the weather feature on Google Earth. The conspiracy theorist believes that this occurs because an unidentified Google employee wants us to see whatever is hidden there.

The presenter suggested that it could be a UFO base, some secret treasure, or a glitch in Google Earth.[7] 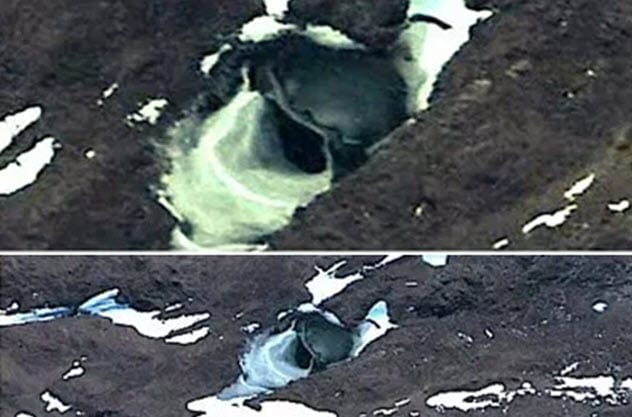 There are two craters along the coast of Antarctica. Both go deep below the surface into the permafrost as if something had dug its way in. Conspiracy theorists have jumped on board to suggest that the craters are the entrances to a secret government facility, an alien base, or the secret Nazi base mentioned earlier.

Scott Waring, a UFO conspiracy theorist, said that the craters were formed by a UFO buried in the permafrost. He claimed that he spotted the UFO in the original image he viewed on Google Earth. However, he explained that the UFO is no longer visible because Google edited the original image.[8]

2 Antarctica Does Not Exist 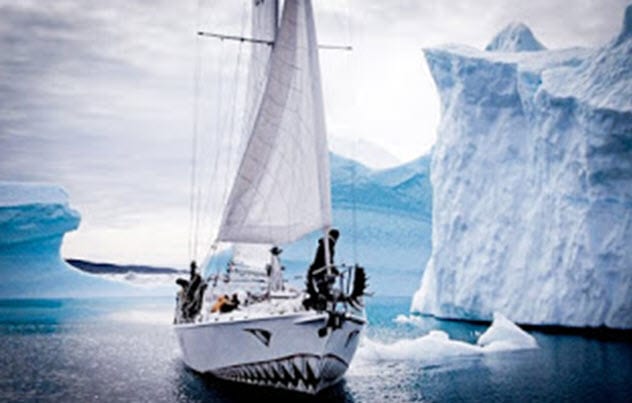 There is a weird conspiracy theory that the whole of Antarctica and the South Pole do not exist. This belief is most common among flat-earthers who claim that our planet is flat. Flat-earthers believe that the North Pole is at the center of the world while the South Pole surrounds the Earth.

According to flat-earthers, Antarctica is actually a thick wall about 30 to 60 meters (100 to 200 ft.) high that surrounds our planet. The wall stops everything from falling over the edge of the Earth. Flat-earthers say we cannot confirm the existence of the wall because world governments and the United Nations have strict no-fly and no-sail zones around Antarctica.

Conspiracy theorists believe that the British Captain Cook is one of the few humans to have ever seen the wall apart from government agents. Supposedly, Captain Cook reported seeing the huge wall during the three voyages he made to Antarctica. The wall covered the entire coastline, and he could not land anywhere because it was just too tall to climb.[9]

1 The Nazis Hid UFOs In Antarctica 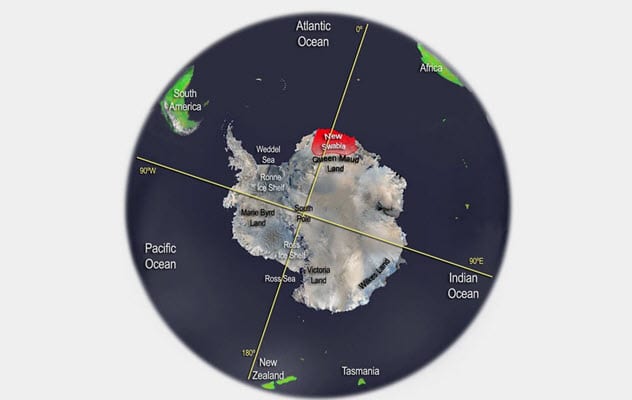 Another conspiracy theory involving the Nazis asserts that they hid UFOs somewhere in Antarctica. The Nazi UFOs have even been linked to the supposed pyramids mentioned earlier.

Believers insist that the Nazis operated a secret UFO in the Antarctic during World War II. US and British forces repeatedly tried destroying the base during the war but were unsuccessful. They only managed to demolish it after dropping an atomic bomb on the base in 1958. Conspiracy theorists claim that the Nazis destroyed a US airplane during this operation.

This idea is regarded as false because the Nazis never had a base or any military interest in Antarctica. As mentioned earlier, they only went to Antarctica with one ship to find new whaling grounds. They did not have enough supplies to build an underground base.[10]

The so-called operation to expel the Nazis from the secret UFO base was actually a military training to simulate the invasion of the icy cold Soviet Union. This involved 13 ships, 33 airplanes, and 4,700 soldiers. The Nazis did not shoot an airplane down during the training, either, as there were no Nazis.

Lastly, the atomic bomb supposedly used to destroy the UFO base was actually detonated 2,400 kilometers (1,500 mi.) off the shore of Antarctica. Nevertheless, conspiracy theorists insist that the Nazis did have UFOs tucked somewhere in Antarctica and even used the technology to create alien weapons which were then hidden in Antarctica, South America, and the Arctic.

+ A UFO Flew Directly Above A Research Station In The Antarctic 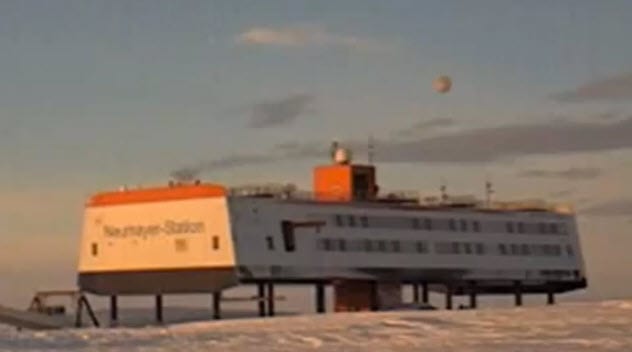 In 2012, there were claims that a UFO was flying over the Neumayer-Station III in Antarctica. A video shot on August 10, 2012, showed an object flying above the research station. Other conspiracy theorists suggested that the object was part of a new weapon the government was creating.