“Easter eggs” are jokes and messages intentionally hidden within a work of art. They are direct communications between the artist and their fans, and they can be found in video games, songs, computer programs, books, music videos, and especially movies.

As Anna and Kristoff head up North Mountain in search of Elsa the Ice Queen, Anna admitted that she’s in love with Hans even though the two had only spent a short time together. Kristoff scoffs at the notion and points out that she barely even knows Hans. Memorably, he quips, “What if you hate the way he eats? What if you hate the way he picks his nose . . . and eats it? All men do it.”

Later, at the very end of the film’s credits, the filmmakers inserted the following disclaimer:

That’s not the only Easter egg found within Frozen. Both Kristen Bell (who played Anna) and Idina Menzel (who portrayed Elsa) auditioned for the role of Rapunzel in 2010’s Tangled. Santino Fontana (who played Hans) auditioned for the role of Flynn Rider in Tangled as well. None of the above got their desired parts, but in a nod to their efforts, both Rapunzel and Flynn briefly appear in the scene where guests arrive for Elsa’s coronation while Anna sings “For the First Time in Forever.”

9Back To The Future (1985)
A Nod To Fellow Time Travelers 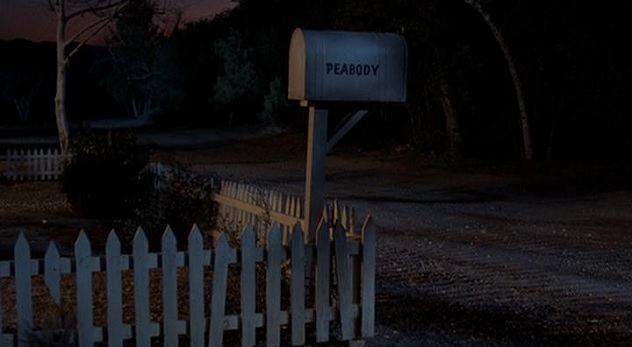 Back to the Future director Robert Zemeckis staged a rather elaborate Easter egg for his classic film. When Marty first traveled to 1955, his DeLorean time machine crashed into a barn. When the owners of the barn—which include a man, a woman, and two kids—investigated, they mistook Marty for an alien invader. Dad ran to get his shotgun, and Marty jumped back into the DeLorean and raced away. Dad pursued and shot his own mailbox as Marty escaped. Just before it exploded, the mailbox revealed the family name to be “Peabody.”

During the closing credits, the names of the family were revealed: Ma, Pa, and Daughter Peabody. Only the son was given a first name: Sherman. Mr. Peabody and Sherman were time travelers in the cartoon “Peabody’s Improbable History” which appeared on the ’60s TV series The Rocky and Bullwinkle Show. They later returned in the 2014 animated feature Mr. Peabody and Sherman. 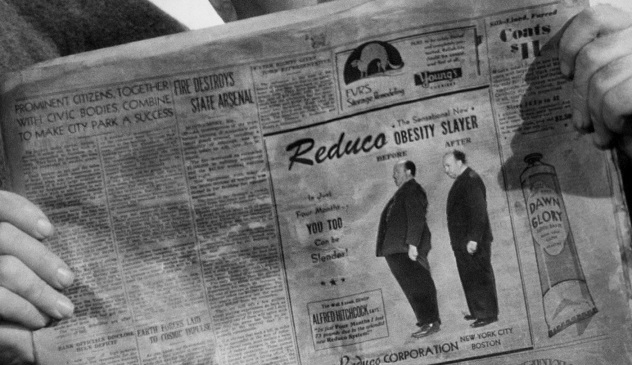 Alfred Hitchcock may not have invented Easter eggs, but he made perhaps the most prolific use of them. Out of the 60+ films that Hitchcock directed, he made cameos in 39 of them. After a while, it became a fun little gag for his audience to search for him hanging out in his own movie.

He twice appeared in his 1927 silent film Lodger: A Story of the London Fog, and he appeared twice in three more of his films. The cameos were usually at the beginning of his movies because he preferred his audience to concentrate on the plot. He spoke in only one cameo (1956’s The Wrong Man), and he often appeared unobtrusively in crowd scenes or as a pedestrian in the background.

His 1944 film Lifeboat presented a unique challenge. The movie takes place entirely on a small boat without extraneous crowds or extras anywhere. Hitchcock toyed with the idea of appearing as a body floating around the lifeboat, but he eventually decided to insert himself into a newspaper advertisement found at the bottom of the lifeboat.

The advertisement is for a fictional diet pill called Reduco. Hitchcock appeared as a Reduco user displaying his incredible weight loss. The ad’s copy reads: 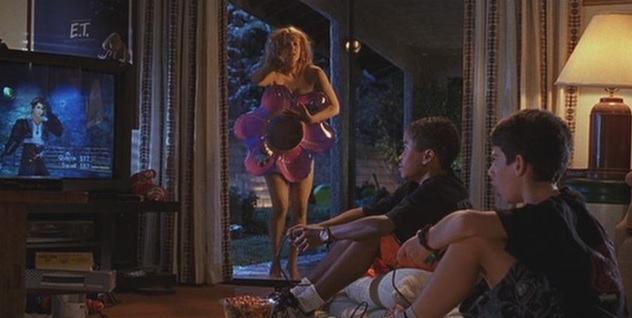 Drew Barrymore portrays Dylan Sanders, one of Charlie’s Angels. Sanders became involved with the Angels’ client, Eric Knox—after spending the night at Knox’s stilt house, she discovered that Knox had tricked the Angels into stealing software for him. Knox then shot at Sanders, missing her and shattering the window behind her. She fell right through it, but her robe caught a shard of glass and allowed her to slow her fall.

Sanders landed into a neighbor’s yard, naked as can be. The yard she fell into was actually extremely significant. Director McG chose a yard on Lonzo Street in Tujunga, California—the same yard where Elliott first met E.T. in 1982’s E.T. the Extra-Terrestrial. Barrymore famously portrayed Elliott’s precocious five-year-old sister, Gertie.

After Barrymore’s Sanders landed in the yard, she broke into the same house she had filmed E.T. in 18 years earlier. As she entered the sliding doors, she encountered two kids with a bowl of Reese’s Pieces between them. And if the viewer still didn’t get the connection, the kids also had an E.T. poster hanging behind their TV. 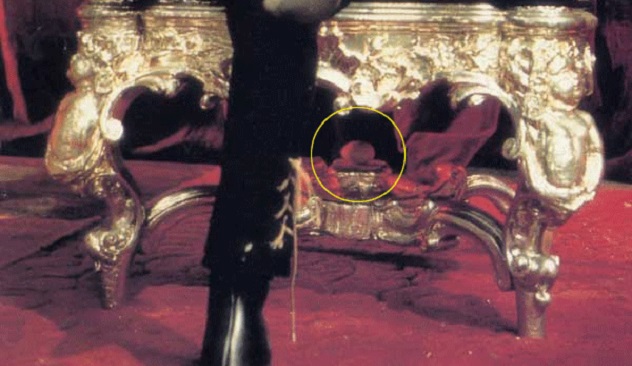 Filmmakers have been inserting Easter eggs into films for a long time, but the term is said to have originated during the filming of The Rocky Horror Picture Show. According to the story, the cast decided to have an Easter egg hunt on the set, and a few of the eggs were so well hidden, they were not found and removed before filming resumed.

At least three eggs were captured on film: one under Dr. Frank N. Furter’s throne, one atop a lamp in the main hall, and another near the lab elevator. Some have argued that these aren’t true Easter eggs, because they weren’t deliberately left there by the filmmakers. But considering the movie in question, it’s highly unlikely that the filmmakers would have removed the eggs and reshot the scenes had they discovered them. 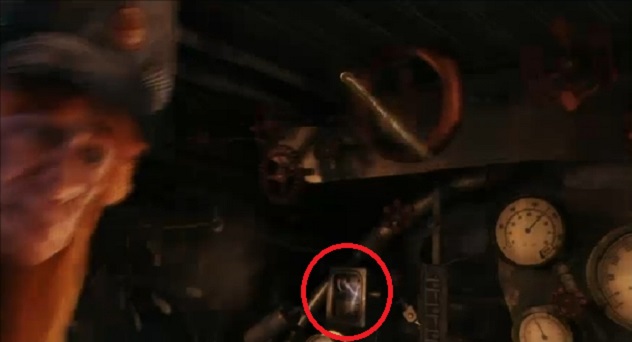 When Robert Zemeckis tackled Chris Van Allsberg’s popular children’s book Polar Express, he attempted to answer the age-old question of how Santa—and his train, the Polar Express—traveled to and from the North Pole in one night. Taking a cue from Back to the Future—another film directed by Zemeckis and one released the same year that the original Polar Express book was released— Zemeckis actually installed a Flux Capacitor inside the Express. During the scene where Smokey and Steamer are juggling the cotter pin, you can see the Flux Capacitor on the left side of the engine cab. You’ll need to pause or slow down the film to catch it, but it’s there.

Zemeckis actually had several scenes in Polar Express meant to remind viewers of his earlier time-traveling franchise. A group of striking Santas were seen carrying placards that indicated they were striking the Lone Pine Mall—the same mall used in the original Back to the Future. Plus, when Santa disappeared in the film’s finale, his sleigh skids leave parallel fiery trails reminiscent of those left by Marty McFly and Doc Brown’s DeLorean.

Here’s another Easter egg that can only be found by patiently sitting through the credits. During Azkaban, Harry received a cool gimmick called a “Marauder’s Map.” Once opened, the map indicated the location and movements of every person on Hogwarts property—even if they were wearing invisibility cloaks or walking through secret passages. The map revealed their locales by displaying their shoe prints.

The film’s closing credits are displayed across the Marauder’s Map, with shoe prints weaving through and around the credits. As the motion control camera crew has their names flashed across the screen, the image pans downward to the bottom of the map and then to the right. On the far left side of the bottom of the map, two sets of prints indicate a couple clearly having sex while standing in a round alcove. 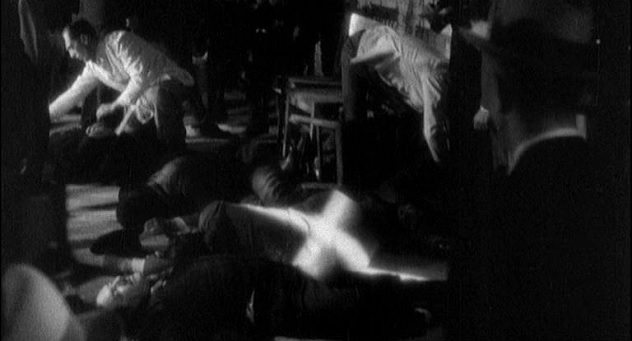 Legendary director Howard Hawks practically invented the gangster genre with his 1932 classic Scarface. In it, he added a motif that carried throughout the film. The title character, Tony Camonte, had a scar on his left cheek in the shape of an X. In every scene where someone met their demise, an X was prominently displayed somewhere in the background.

The shadow of an X appeared on the hospital room wall just before Camonte killed a patient there. A neon sign near another victim had a cross on it. Flashlights cross each other as the focus comes to rest on a corpse (pictured above). In one memorable scene, seven thugs are lined up against a wall and—in the style of the St. Valentine’s Day massacre from just three years earlier—brutally murdered. Above them, supporting the ceiling, were the silhouettes of seven X-shaped girders.

Martin Scorsese paid homage to Hawks in his 2006 gangster film, The Departed. Like Hawks, Scorsese placed X’s all throughout his movie, particularly when a character was about to die. 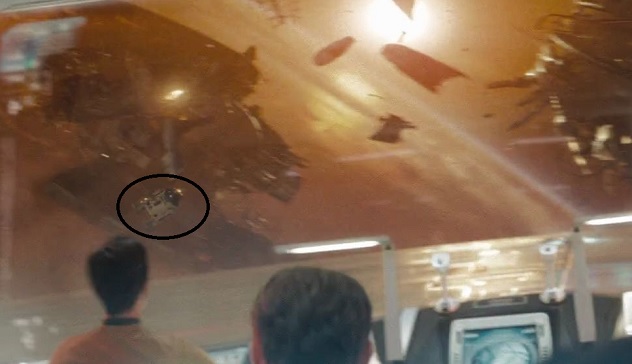 J.J. Abrams has admitted to not being a big fan of the Star Trek franchise. But he is a Star Wars geek through and through, which is one of the reasons he agreed to direct the upcoming Star Wars: Episode VII. Knowing that, it shouldn’t at all be a surprise that he inserted an Easter egg homage to his favorite franchise while directing the 2009 reboot of the Star Trek series.

When the film was released, Paramount challenged moviegoers to find R2-D2 in the movie. People found the little robot in the scene where the Enterprise arrives off the planet Vulcan in the middle of a debris field. The debris are the remains of Federation ships destroyed by the Romulan ship Narada. Just after the ship does a barrel roll, you can see R2-D2 on the bridge view screen, floating among the debris.

R2-D2 appeared again in Abrams’s 2013 sequel Star Trek: Into Darkness. When the Vengeance blows a hole in the side of the Enterprise, you can see R2-D2 among the debris that gets sucked into space. 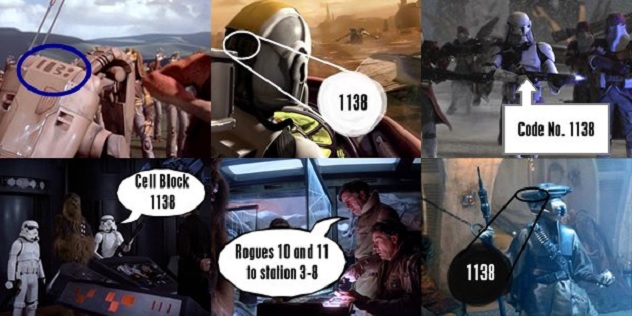 Much like with Hitchcock and his cameos, George Lucas had a recurring Easter egg for most of his films. At some point or another, in just about every Lucas production, you will see the number “1138,” an homage to Lucas’s first film, 1971’s THX 1138.

It first appeared on the license plate of Milner’s coup in 1973’s American Graffiti. In Star Wars IV, Luke and Han escort Chewbacca to “Cell Block one-one-three-eight” as a ruse to rescue Princess Leia. During the battle on Hoth in 1980’s The Empire Strikes Back, General Rieeken sends “Rogues 10 and 11 to station 3-8.” In 1983’s Return of the Jedi, Princess Leia—disguised as a Boushh bounty hunter—has “1138” written on the side of her helmet. In the three Star Wars prequels, battle droids have the number on their backpacks, clones have it emblazoned on the back their helmets, and Commander Bacara’s code number is 1138.

These numbers have also appeared as Easter eggs in 2001’s Ocean’s Eleven and 1981’s Raiders of the Lost Ark, as well as the TV series Smallville and the video game Duke Nukem 3D.

Steve has spent many nerdy hours searching for Easter eggs in his favorite flicks. He is the author of 366 Days in Abraham Lincoln’s Presidency: The Private, Political, and Military Decisions of America’s Greatest President.