It’s not easy ending the story of a popular character. You have to write them an exit that’s true to their story arc, and you have to do it in a way that won’t piss off the fans. It’s a tortuous, time-consuming art—which may explain why so many writers just give up and write the dumbest ending they can.

Note: Since this is a list of character fates, it should come as no surprise that spoilers lie ahead.

10Mork And Mindy Got Trapped On Prehistoric Earth

One of the most successful spinoffs ever created, Mork and Mindy grew out of a Happy Days guest spot for Robin Williams and then became a beloved sitcom of its own. Week after week, audiences tuned in to see the hapless Mork battle with contemporary human customs . . . until the final episode, when they tuned in to see him battle an evil space alien.

In the three-part episode “Gotta Run,” Mork accidentally makes contact with fellow alien Kalnik. Though he first thinks that he’s found a friend, Mork discovers that Kalnik is secretly plotting to overthrow Earth and enslave the human race. With no one else to save the day, Mork and Mindy battle Kalnik across time, finally killing him on prehistoric Earth. But this already bizarre ending wasn’t enough for the producers, who took the strange decision of leaving Mork and Mindy trapped forever in the distant past.

At the episode’s conclusion, we see our heroes falling helplessly through the time vortex. Before we can find out what happens to them, the camera cuts away to an ancient cave painting showing them side by side. The implication is that they lived out the rest of their lives trapped on prehistoric Earth, cut off from their friends and families for all eternity.

9Satan Made J.R. Shoot Himself

Although it was one of the biggest shows in the world back in the ’80s, Dallas is today mainly remembered for the mystery storyline “Who Shot J.R.?” Few people know that J.R. wound up getting shot a second time: by himself, after the devil convinced him to do it.

In the series finale, J.R. is visited by a supernatural being called “Adam,” who takes him on an It’s a Wonderful Life–style tour through his past. After being driven mad by the vision of a world that’s much nicer without him, J.R. finds himself being ordered by Adam to commit suicide. At this point, the script strongly hints that Adam is literally Satan, but before that twist has even sunk in, J.R. places a gun to his head. We cut away and hear a gunshot. J.R.’s brother Bobby rushes in, looks at the floor, and say “Oh my God!”

The writers eventually retconned this ending for the 1996 movie and the 2012 TV revival. But for a generation of Dallas fans, the image of J.R. being murdered by Satan was the ending that stuck. 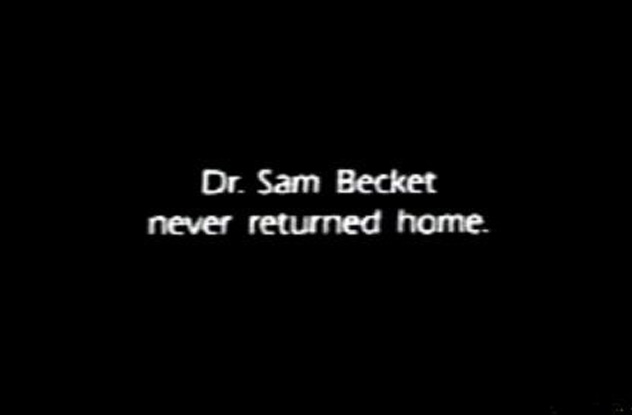 Quantum Leap was about a scientist who, thanks to an accident with a time machine, enters other people’s bodies throughout history, all the while trying to get back to his own time. As played by Scott Bakula, Sam Beckett was a kindhearted, tragic soul whom the audience spent five years rooting to eventually return to his previous life. Yet when the final episode aired in 1993, it abruptly ended with the above title card, reading, “Dr. Sam Becket (sic) never returned home.”

The network had canceled the show at the last minute, forcing a standard season finale to be reworked into the series finale. The implications were horrifying. As someone who spends his life literally inhabiting other people’s bodies, Sam Beckett has no corporeal form. This means he can’t age or die. If he never made it back home, he’s still trapped out there somewhere. He’ll spend the rest of eternity leaping from one body to another.

An angry old curmudgeon who railed against stupidity, Victor Meldrew of One Foot in the Grave was the face of dark British comedy for 10 whole years. The show was so gleefully cynical that even when the writers killed Meldrew off in a traffic accident, nobody complained. But then they brought him back as a lonesome ghost.

A year after the series ended, the cast reunited for a one-off charity special. Known simply as “The Comic Relief Special,” the mini-episode features Meldrew and his wife visiting a dying relative in the hospital. At first glance, it seems to be set before the finale’s deadly traffic accident, but then things get weird.

As the episode plays on, it becomes apparent that no one can see or hear Meldrew. In the final few seconds, Meldrew finds a copy of The Sixth Sense, and everything falls into place. He is dead, and his wife has forgotten all about him. Literally the last thing audiences ever sees of this much-loved character is a slow zoom on his face as the horror of his predicament becomes clear. 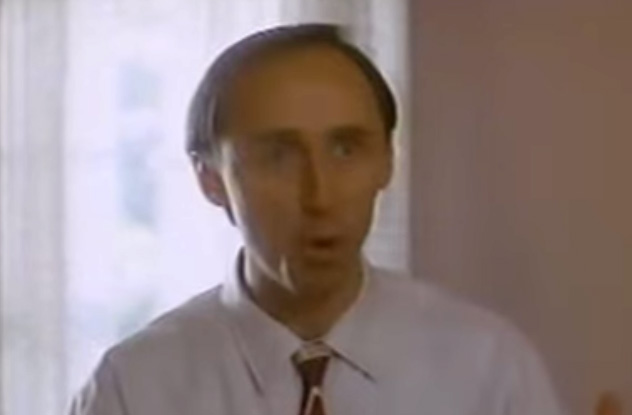 Although it’s recently become weirdly hard-hitting, for most of its 70-year run, Archie was the squarest comic on Earth. Each issue featured its squeaky-clean characters getting into squeaky-clean fixes, with squeaky-clean resolutions that reflected the reality of teenage life to literally no one. If most of us were to imagine an ending to the characters’ eternal adolescence, it would probably involve them living happily in the suburbs and watching their kids go to school together.

In 1990, international production company DiC bought the movie adaptation rights to Archie. Their resulting effort, Archie: To Riverdale and Back Again, saw the characters all grown up . . . and living hollow, miserable lives. Veronica has been in and out of marriages, while Betty is stuck with a boyfriend who mentally tortures her. But most terrifying of all is the fate awaiting Jughead. After 60-odd years as an optimistic, lovable goofball, we now see Archie’s best pal as depressed, with relationship problems and a bratty kid he can’t control. He’s now a psychoanalyst who projects his issues onto his patients.

Thanks to poor reviews, the film (aired as Return to Riverdale on NBC) quietly got shunted out of the Archie canon not long after it was made. Yet even this travesty wasn’t the worst of the fates awaiting Jughead. In 2013, Afterlife with Archie turned him into a flesh-eating zombie.

5Pinky And The Brain Were Enslaved

Pinky and the Brain featured the most lovable pair of megalomaniacal rodents to ever grace the screen. Every week, audiences tuned in to watch their plans for world domination fail miserably, safe in the knowledge that they’d never stop trying. Until, that is, they were forced to go on the lam and wound up with Elmyra from Tiny Toons.

In 1997, those in charge of Warner Cartoons tried to retool the show into a more traditional sitcom, downplaying the premise of mad conquest. They forced the writers of Pinky and the Brain to rework the show to include Elmyra from Tiny Toons, fewer attempts at world domination, and a musical number every single episode. It was such a truly awful decision that the writers even lampooned it in the new theme song, with lines like: “Now Pinky and the Brain/share a new domain/It’s what the network wants/Why bother to complain?”

Story-wise, it was even worse. To explain the new setup, the writers concocted a tale about a Christopher Walken look-alike wanting the mice dead, forcing them to go into hiding. Unfortunately, they choose to hide out in Elmyra’s room, and once she discovers them, she refuses to let them go. Since the series was canceled after only a handful of episodes, we can only assume the mousey duo were forced to spend the rest of their lives as her miserable rodent slaves. 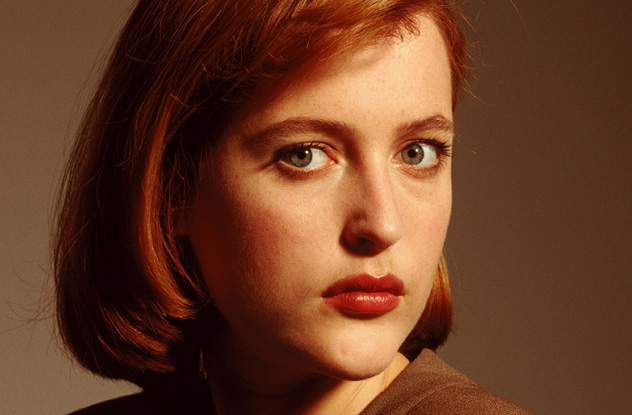 Not every bizarre character fate has been utterly depressing. Some have even been kind of awesome, such as the fate of The X-Files‘s Dana Scully. Originally written as the level-headed skeptic to David Duchovny’s believer, Scully began as a normal, everyday protagonist. Then the writers got bored and decided to make her immortal.

In the 1995 episode “Clyde Bruckman’s Final Repose,” Peter Boyle plays a character who can see exactly how everyone will die. In one of the series’s weirder moments, he uses his powers on Scully and discovers that she’ll live forever.

This plot thread was picked up again in 1999, when a photographer reveals that he’s nearly 150 years old and can’t die because he looked away when Death came for him. At the episode’s end, Death comes for Scully, but the photographer takes her place—implying that she’s now taken his as an immortal.

During the publicity junket for the second X-Files film, creator Chris Carter even responded to a question on the subject by saying, “It’s kind of true, if you think about it. I mean, she’ll never die.”

3Doctor Who’s Assistants All Had Terrible Things Happen to Them

Ever since it started way back in 1963, Doctor Who has been defined by its companions as much as the Doctor himself. For generations of kids, Rose Tyler, Sarah Jane Smith, and Amy Pond were the true stars of the show. So it seems strange that they nearly all suffered bizarre, hideous fates.

Since the 2005 revival, fans have seen Rose trapped in a parallel universe, Donna have her memory wiped, and Amy Pond get stuck for all eternity in the past. But the fates of original series characters are even worse. Popular ’80s companion Peri was disintegrated by Brian Blessed while under the control of an evil talking slug, and child companion Adric died in a spaceship crash that caused a planet-wide explosion. Megastar companion Jamie in the ’60s had his times with (and man-crush on) the Doctor erased, while the Doctor outright murdered Kamelion. Even Sarah Jane Smith, the most popular companion in the entire 50-year run of the series, wound up alone, unmarried, and broken due to the Doctor abandoning her.

For a show that’s all about finding goodness and wonder in the universe, Doctor Who certainly makes it all seem depressing.

2Gilligan Wound Up Playing For The Harlem Globetrotters

Before Lost came along, the most famous shipwrecked show in history was Gilligan’s Island. Over the course of 100 episodes, audiences watched the castaways—helped and hindered by lovable man-child Gilligan—struggle to return home. Just like Quantum Leap above, the series itself ended with them seemingly trapped for all eternity, although they were finally rescued in a 1979 TV movie. Then, in 1981, the writers decided this wasn’t closure enough. Instead, Gilligan’s ultimate fate would be to play for the Harlem Globetrotters.

Insane as this is, it’s not the weirdest destiny fate had in store for Gilligan. In the non-canon animated series, he wound up stranded on another planet after the Skipper’s experimental spaceship crash-landed en route to Earth.

The original Brady Bunch is the most non-threatening sitcom ever devised. Over five seasons, the six Brady kids plus Mom and Dad got into all sorts of genial scrapes, overcoming their problems with love and togetherness. So when CBS revived the show with the original cast in 1990, viewers probably expected more of the same. What they almost certainly didn’t expect was a show about alcoholism, abuse, and unemployment.

Confident older sister Marcia is now a depressed alcoholic. Clumsy, adorable Peter is stuck in an abusive relationship. Little Bobby has been paralyzed in a racing accident. Meanwhile, peripheral characters like Wally have no job, and the entire extended family seems about one more bad decision from going nuts.

The show was canceled after six episodes, and no more attempts were made to continue the series with the original cast members. So this was it, after 20 years after half a dozen TV series and movies, the final fate of the kindhearted Bradys.