Always in the hand of a legendary warrior, weapons imbued with magic or supernatural powers have long been a part of mythology. From Zeus’s thunderbolts to Mjolnir, nearly every civilization has at least one example of a weapon that helps some gods or heroes throughout history. 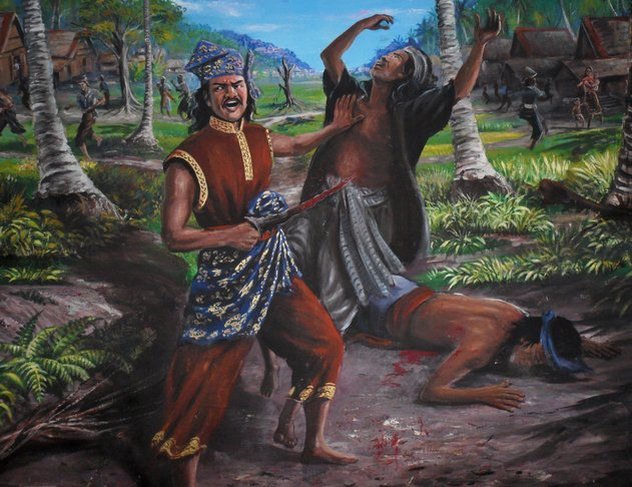 Translated as “flower shield,” Taming Sari was the fabled weapon of the legendary Melakan warrior Hang Tuah. It was a kris, an asymmetrical dagger with a specific blade pattern. Legend says that it was also the first kris ever created. The best of the sultan’s Laksamana (admirals), Hang Tuah was given the weapon after being recognized by the sultan for his skills. The weapon was said to have supernatural powers. Taming Sari was unique in that it did not have a sheath, as Hang Tuah considered his enemy’s body to be the only appropriate sheath.

Rankled by the favoritism showered on Hang Tuah, various members of the court spread rumors about him, which led to the sultan calling for his death. The bendahara (chief minister) tasked with carrying out the execution instead hid Hang Tuah, repaying an old debt. Thinking he was dead, Hang Tuah’s friend Hang Jebat began slaughtering everyone he could find. Eventually, the bendahara revealed his hoax. The sultan pardoned Hang Tuah but ordered him to kill Hang Jebat. With a heavy heart, Hang Tuah killed his friend with Taming Sari after a lengthy battle, throwing the dagger into a river after he was done. 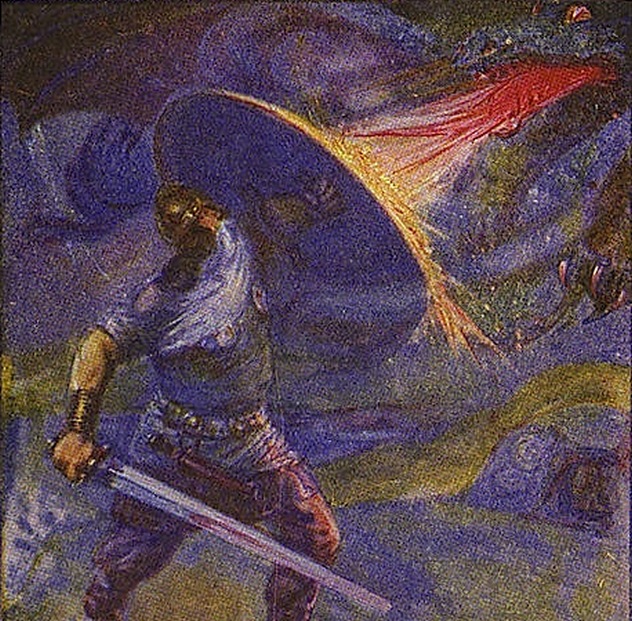 The two swords of Beowulf, Hrunting and Naegling, came to the Geatish hero in different ways. Hrunting was lent to him by Unferth, an underling of the Danish lord Hrothgar. It was an ancient weapon, said to have never let down a warrior who wielded it. However, in Beowulf’s fight against Grendel’s mother, the sword was unable to harm the monster in any way. Nevertheless, Beowulf later returned Hrunting with nothing but good things to say, as it was useful in every other battle.

The epic doesn’t explicitly specify where Naegling comes from. Deriving from the word for “nail,” Naegling was often described as a fine and ancient sword. It was the weapon Beowulf chose to take to his final battle with Daeghrefn. Eventually, much like Hrunting did earlier, Naegling failed the hero in battle, breaking in two. Although this time, it was because Beowulf’s hand was too strong for the blade. 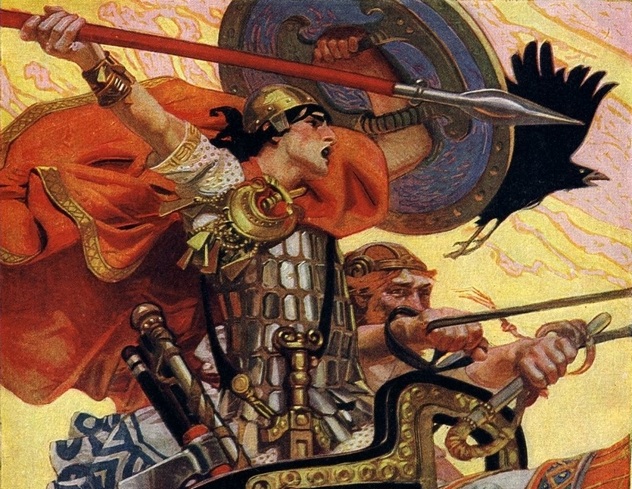 Gae Bulg was a unique spear owned by the Irish mythological figure Cuchulainn and given to him as a gift by Aiofe, the mother of his only son. Translated as “barbed spear” or “belly spear,” it was said to have special barbs all along the shaft. When Gae Bulg pierced a man’s body, these barbs would open up, making the spear nearly impossible to remove without killing the victim. A few variations of the myth also give the spear seven different heads, each with seven barbs of its own. In addition, Gae Bulg was fashioned from the bone of a sea monster, the Coinchenn, which perished fighting another sea monster.

Another unique quality of Gae Bulg was the way it was used: Held by the toes, it was kicked upward, piercing the victim’s groin. Cuchulainn used Gae Bulg to kill not only his foster-brother Ferdiad but also his own son, Connla, whose identity was disguised from Cuchulainn during their fight. 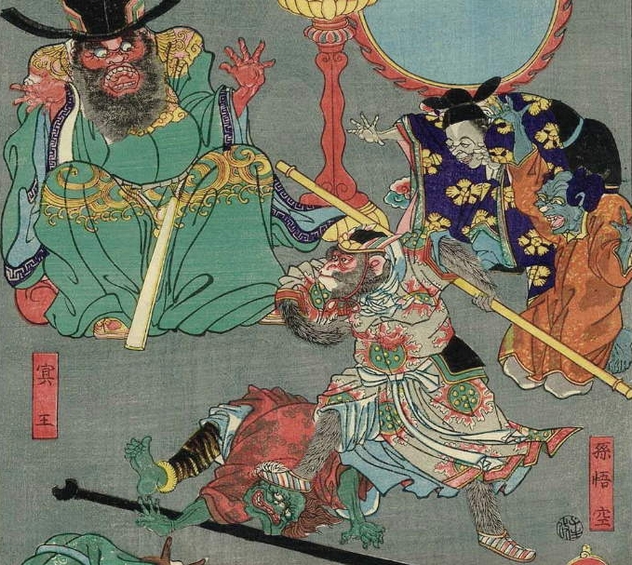 Ruyi Jingu Bang was the weapon of choice for Sun Wukong, the Monkey King hero of the Chinese novel Journey to the West. Ruyi Jingu Bang was an iron rod imbued with magic. Translated loosely as “As You Wish, Golden Rings Clasped Staff,” the poetically named weapon was normally about 6 meters (20 ft) long. However, if the user so chose, Ruyi Jingu Bang could go from being as little as a needle to as tall as the heavens themselves.

Not only could the 8-ton staff change size, it could also make infinite copies of itself and fight independently of Sun Wukong. Obtained at the Water Crystal Palace of the Dragon King of the Eastern Ocean, the weapon allowed Sun Wukong to protect his feeble master Xuanzang on their journey in search of Buddhist scriptures. Ruyi Jingu Bang was gifted to Sun Wukong by the Dragon King, who believed it to be a simple metal rod. Ruyi Jingu Bang was said to have been the pillar used by Yu the Great to measure the depths of the Great Flood of China (and to eventually end the Flood). 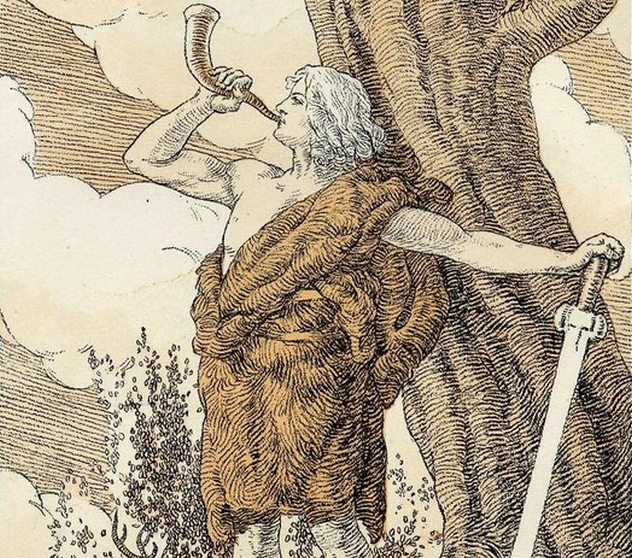 One of many legendary weapons in Norse mythology, Gram was the name of a sword wielded by Sigurd, the hero and central figure of the Volsunga saga. Originally possessed by his father Sigmund, the sword was broken into two pieces during a battle. Sigmund gave the pieces to his wife, hoping they might serve his unborn son someday. Regin, Sigurd’s foster-father, eventually reforged the sword for him, creating a weapon so strong it could cleave an anvil in two.

As payment for fixing Gram, Regin entrusted Sigurd with the task of killing Fafnir, Regin’s dwarf brother who had transformed into a dragon after killing his father over some cursed gold. After first avenging his own father’s death, Sigurd went to Fafnir’s lair and killed the dragon, utilizing some tips from Odin to win the fight. Sigurd then cooked Fafnir’s heart, because Regin wished to eat it. Sigurd tasted the heart with his finger to make sure it was done. After the blood touched his mouth, he gained the ability to speak to birds. He overheard four birds talking nearby and learned of Regin’s plan to kill him for the treasure. Seeing the guilt in the dwarf’s eyes, Sigurd beheaded him on the spot. 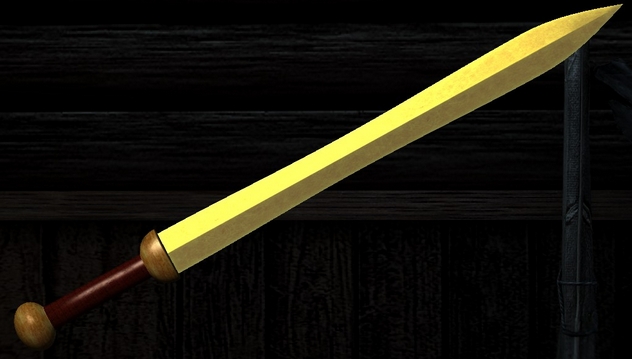 According to a medieval legend, Crocea Mors was wielded by Julius Caesar, the most famous of Roman emperors. The sword was believed to have shone brightly in the Sun and was said to kill anyone it managed to damage. Hence its name, meaning “yellow death” in Latin. Said to be a gift from the gods’ smith Vulcan himself, it was originally the property of the Trojan prince Aeneas, who received it from his mother, the goddess Venus. It was said to have fallen from the sky and landed on the future site of Rome, with Aeneas hearing the words “with this, conquer” in his mind.

Caesar had it with him during his conquest of Britain, and the British prince Nennius was said to have taken it in battle. For a brief period, Nennius could not be harmed, but he later died from a wound sustained by the sword. When Nennius finally succumbed to his injury, the sword was buried with him. 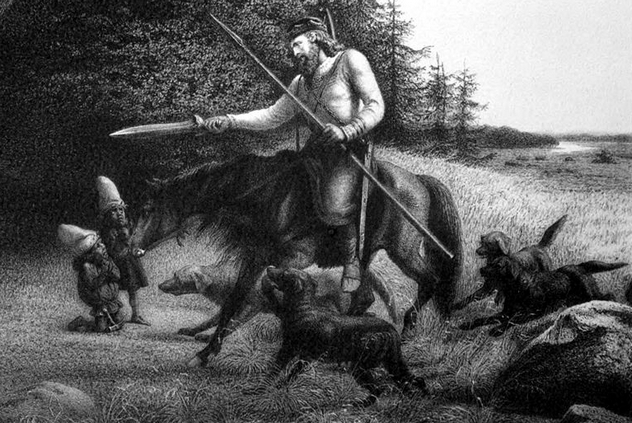 Another magical Norse weapon, Tyrfing was a sword forged by a pair of dwarves named Dvalinn and Durin. The dwarves were captured by Odin’s grandson Svafrlami after they left their home. They would be turned to stone if they didn’t return before the sunrise. The king forced them to create the weapon, so they decided to curse it: Whenever it was removed from its sheath, it would kill someone. In addition, it would commit three foul deeds and be the cause of Svafrlami’s death. A berserker named Arngrim ended up fulfilling the last part of the prophecy by cutting off Svafrlami’s hand and killing him with Tyrfing.

Eventually, Arngrim’s granddaughter Hervor, vowing to be a Viking, set out to retrieve Tyrfing. It had been buried with her father, and his grave was on a haunted island. Unable to find reliable companions, Hervor ventured on her own, binding and summoning her father’s spirit until it gave her the sword. The spirit spoke of a prophecy that Hervor ignored: Tyrfing would cause the death of everyone close to her. Eventually, Hervor’s son Angantyr was killed by his brother Heidrek. 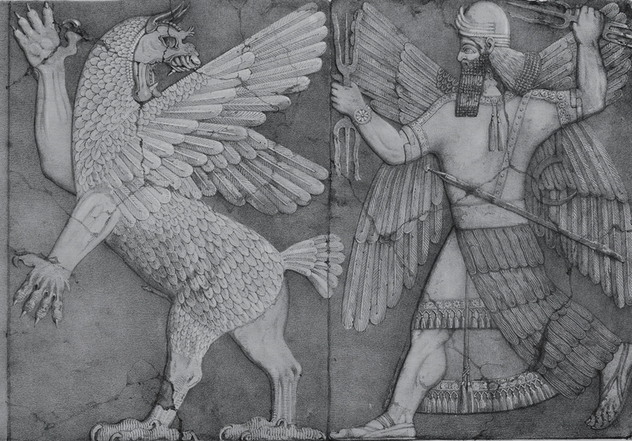 Sharur was the mace of the Sumerian god Ninurta and possessed the ability to speak. Not only could Sharur talk, it was also sentient, offering the god advice on powerful enemies, gathering information wherever it could. Sharur was able to do this because it could also fly, leaving Ninurta to deal with other issues. Translated as “smasher of thousands,” it was extremely powerful in the god’s hand and was also capable of flying around the battlefield to spray venom and flame.

Sharur features most prominently in Ninurta’s battle with Asag, a demon so evil that fish boiled alive in his presence. Born from the union of Heaven and Earth, Asag created stone demons through a union with the mountains and fought against Ninurta. The god triumphed over his enemy, falling in their first battle but ultimately killing the demon. Ninurta succeed after using Sharur to receive council from his father, the god Enlil. 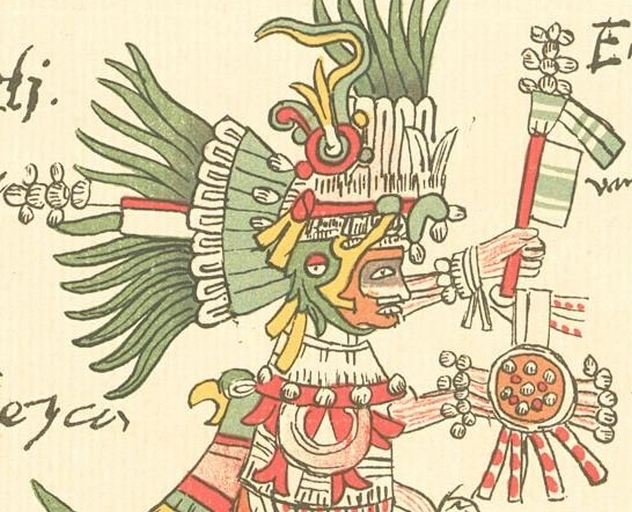 Xiuhcoatl was a mythological serpent in the Aztec religion. Huitzilopochtli, the god of war, the Sun, and human sacrifice, wielded a weapon that was also named Xiuhcoatl. The weapon was meant to symbolize the rays of the Sun. Huitzilopochtli used Xiuhcoatl to destroy his older sister, the goddess Coyolxauhqui, who was angry at their mother for getting pregnant. The mother was accidentally impregnated while sweeping at Coatepec, where she spotted a ball of feathers and tucked it in her waistband.

Even though pictures illustrate Huitzilopochtli with a spear and a snake in his hand, the snake was most likely a spear-thrower known as an atlatl. (Although the word “Xiuhcoatl” does translate as “turquoise serpent.”) When Huitzilopochtli slayed his sister, he pierced her chest, which might demonstrate the mythology behind the practice of Aztec heart sacrifice. 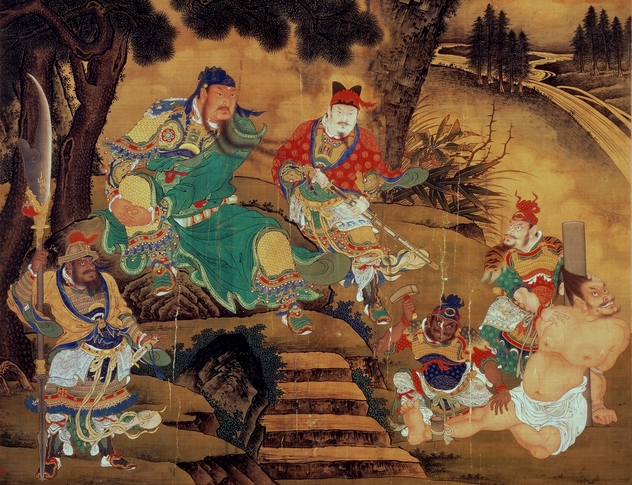 Wielded by the legendary general Guan Yu in the second and third centuries A.D., the Green Dragon Crescent Blade was said to be a guandao, a traditional Chinese weapon that resembles a halberd. A giant of a man, Guan Yu asked his blacksmiths to make a polearm that combined the chopping power of a saber with the length of a spear. Believed to weigh as much as 45 kilograms (100 lb)—although some sources say it was no more than 18 kilograms (40 lb)—no normal human would have been able to use it effectively.

Luckily, that wasn’t an issue for the general. Guan Yu wielded the Green Dragon Crescent Blade while defending Liu Bei, the first ruler of Shu Han. Deified after his death as a sort of Chinese god of war, Guan Yu blesses those who show loyalty and brotherhood, traits which defined him in his life.