Snails move slowly and usually don’t draw a whole lot of attention. But maybe they deserve a little more credit—these shelled molluscs have evolved to fill a wide variety of major ecosystem roles, leading to some bizarre or dangerous adaptations that put both animals and humans at risk. 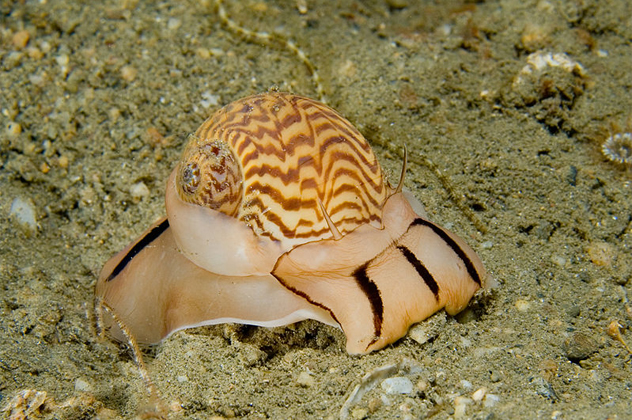 Clams are generally impervious to attack by all but a large animal capable of crushing their shells. It might come as a surprise then that certain species of snail, such as the beautiful (but still creepy-looking) moon snail, are often a clam’s worst nightmare. Often found in the Pacific Northwest, the little moon snail makes a living by drilling into the shell of other molluscs with its barbed radula (tongue) and then secreting a powerful acid to dissolve the calcium carbonate making up the prey animal’s shell. The large, fleshy foot of the moon snail evolved in a mantle-like shape that serves to hold prey and prevent them from escaping.

The much smaller oyster drill takes on far more challenging prey: It gradually bores into the shell of an anchored oyster with the assistance of sulfuric acid before extracting its prey’s insides. 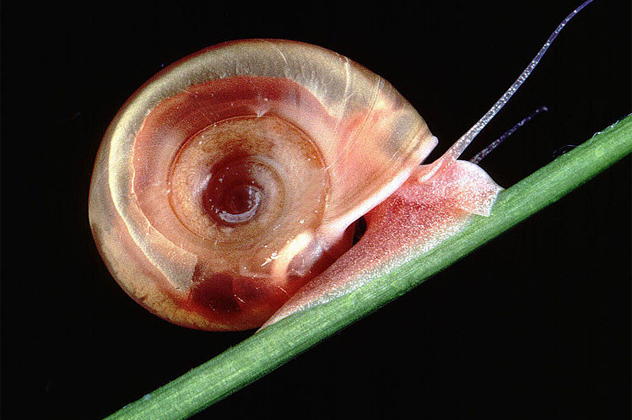 Slowly advancing through a wide range of habits and coming into contact with many sources of parasite transmission, certain snails are among the most dangerous hosts for human parasites. Found primarily in tropical regions, schistosomiasis is a dangerous but often-overlooked parasitic infection carried by snail hosts and released into the water. Over 200 million individuals are affected by the disturbing affliction worldwide, which is second only to malaria as the most damaging parasitic disease.

Schistosomiasis is released from the freshwater snails in infectious forms known as cercariae. Infection may result from mere skin contact with contaminated water. Symptoms are, oddly enough, not caused by the worms, but rather the body’s reaction to the presence of the eggs. Symptoms often include rashes and painful skin, followed by fever, cough, chills, and muscle aches. Capable of lasting years without treatment, schistosomiasis can lead to liver symptoms, bladder cancer, and even spinal cord or brain damage, on rare occasions.

With over 500 species, cone snails are found in warm waters across the tropical and warmer temperate ocean zones. Cone shells stalk the sea floor and use their spines to harpoon small fish and deliver a lethal dose of venom. Once prey has been subdued, the snail will eat into the flesh with its radula. The venom of the larger and more potent species is powerful enough to kill humans. Thirty deaths have been recorded as a result of accidental harpooning in humans who either handled the creatures—which is never advisable—or stepped on the shells while wading. Paralysis, extreme pain, and dizziness are among the immediate symptoms.

We’ve mentioned cone snails before, but researchers have recently discovered a new trait that makes them all the more deadly: Unlike most animals, which only want to get away from a threat, cone snails are actually aggressive if provoked. Imagine stepping near an angry snail, which turns around to take revenge. Also worth noting is that the spines are reverse hocked, with the ability to penetrate even gloves and wetsuits due to the strength of the muscles that anchor them.

Sleek, black, and formidable despite its small size, the assassin snail is a freshwater snail that comes close to cannibalism by eating other snails, shying away from the strict definition by actually eating different species. A type of whelk, this species is a freshwater version also known by the explanatory name “snail-eating snail.”

Assassin snails are often put to work as contract killers by aquarium owners trying to get rid of an infestation of plant-eating snails. Like some of the best assassins, these snails are small at 2.5 centimeters (1 in) and exceedingly sneaky. They burrow through the substrate before latching onto softer-shelled prey, which may be many times its own size. Assassins then suck the remains out of the shell in a rather drawn-out but efficient process. If size as individuals, slime factor, and presence in sheer hordes are the primary factors for rating on the creepy animal scale, the giant African land snail wins on all three counts. Native to African forests and swampy areas in and around Nigeria, the giant African land snail can grow to lengths of 20 centimeters (7.9 in). These snails were introduced to the Miami area through food shipments and smuggling for exotic pet use.

Capable of eating over 500 plant species and damaging stucco homes in their quest to add calcium to their shells, these monster snails are the largest terrestrial gastropods on the planet. Like a number of snails, they are capable of transmitting disease, and very serious ones in this case. A rare form of meningitis caused by a heart lungworm may be carried by the snails as a result of their habit of eating rat waste. Efforts at eradication have included the use of trained dogs.

Native to the forests of Australia and New Zealand, the Otway black snail feeds on slugs, worms, and insects, trapping them with its slimy body while the sharp, rear-facing radula restrains and then rips them apart. A resident of wet forests and cool temperate rainforests, the species makes its home among lush vegetation with moist and highly productive soils.

Normally used to abrade plant material, the raduli of Australia’s five carnivorous snails have developed and adapted into highly effective hunting tools. In New Zealand, earthworms are taken by any of an astounding 23 carnivorous snail species that make up two genera. The largest of these snails measures over 8 centimeters (3 in). Interestingly, these snails may live up to 20 years, far longer than the majority of land snails. Convergent evolution is one of nature’s most interesting lessons. Two unrelated creatures may take on nearly identical appearances or functions through environmental adaptation. The bizarre worm snail completely defies the popular perception of what a snail should look like. Starting out as juveniles that resemble typical snails, worm snails cement themselves to rocks and become completely stationary while they grow a long, tube-like shell with coils. Resembling typical tubeworms, the snails snag food from the water with their modified “foot,” which acts like a snail’s answer to the tubeworm method of extending fans. The 10-centimeter (4 in) creatures can produce mucus strands reaching up to 2 meters (6.5 ft) in length.

The digestive system of the different species making up the Vermetidae family is more like that of a clam or oyster than a typical snail. Found in a wide variety of ocean habitats, the creatures breed in a process where the male releases packages of sperm, which are then captured by the female as if they were food and internalized. Native to shallow coastal zones as well as deeper waters farther out to sea, the spiny murex has the most bizarre and unsettling shell of any snail. Resembling a seagoing porcupine or disembodied rack of antlers, this murex is fully defended as well as a voracious predator. Studded with massive, sharp spines protruding from its shell, the snail is extraordinarily unpalatable and essentially unapproachable to carnivorous fish, which would get a mouthful of spines before they were able to even get close to the shell.

In shallow water, the animals have to grow shorter spines, while those in deeper water are much more impressive, with full-length spikes. Measuring around 5 centimeters (2 in) in height, the inhabitants of the shells are ironically put in harm’s way due to their tendency to be caught up in fishing nets. Deep-water catches by fishing vessels have become a source of shells for sale and display. Known in the fossil record for over five million years, the spiny murex has been featured on New Zealand stamps as an area wildlife icon.

2The King Of Snails Not exactly creepy but but impressive nonetheless, the Australian trumpet is the gastropod equivalent to the giant clam. Native to sandy intertidal zones and the sublittoral zone, which reaches up to 30 meters (100 ft) in depth, the Australian trumpet snail weighs in at 18 kilograms (40 lb), with shell measurements reaching nearly 1 meter (3 ft) in length. The creature is found off the northern half of Australia, Eastern Indonesia, and Papua New Guinea.

Photographs with small children are particularly telling, since kids are often smaller than the giant snail. Little is known about the ecology of the snail except for a study on its feeding, which revealed a strange distinction in their life. The carnivorous gastropods, alone in their genus, feed on tubeworms, which may themselves measure 1 meter in length. The shell is so large that traditional uses have included use as a water carrier and, unfortunately for the king of snails, as a source of lime. If the spiny murex can be likened to a porcupine with its widely spaced, lengthy shell protrusions, Alviniconcha strummeri is more like a cactus or a sea urchin. And that has led the species, found at depths of 1,000 meters (3,500 ft) near deep-sea hydrothermal vents, to be named “the punk rock snail.” The rounded, golf-ball-sized snail is completely covered with fine spines, with only small spaces in between the prickly extensions that cover the shell.

Scientists derived the scientific name from Joe Strummer, the lead singer and guitarist for The Clash, who’s also an avid environmentalist. Researcher Shannon Johnson at the Monterey Bay Aquarium noted that the creature has purple blood due to its use of the ocean abyss habitats, which contributed to the punk-like appearance. The pop culture–based naming choice is not without precedent and was chosen as a way to boost the mainstream appeal of natural sciences.

Christopher M. Stephens is an avid naturalist passionate about understanding the mysteries of this planet and seeing lesser known animals. He holds an MSc. in Environmental Management from Royal Roads University and provides birding tours sought by visitors from Australia, North America, and the UK.