We’ve seen the terrible cost of war, stood witness to the tragedies wrought by human atrocity, and through it all, we’ve discovered something within ourselves that no act of inhumanity can break. The will to go on in the face of unspeakable horror is the hallmark of human nature, because beneath the suffering and outrage, we are all simply people, destined to live and fail and triumph together. Despite differences of race, religion, or creed, we all laugh the same, and we all cry the same. 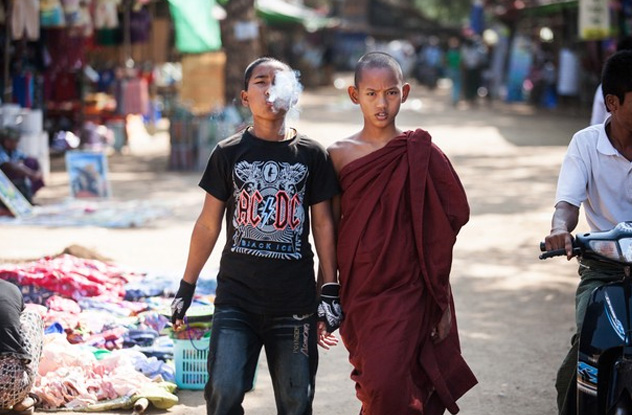 The Ananda temple was built around A.D. 1100 and is one of the many surviving temples in Bagan, Myanmar. According to legend, the monks who built the temple were killed by the king so that they could never create its equal. And every year, Bagan welcomes travelers into this sacred temple with open arms for a two-week-long celebration known as the Ananda Pagoda Festival.

During the festival, the streets and courtyards of the temple become a bustling marketplace. Brightly colored clothing hangs from shop ceilings, the scent of sticky rice and ginger fills the air, wares are hawked, prices bartered, and, in the background, the rhythmic chanting of 1,000 monks falls over everything like a blanket.

The diversity of the event is breathtaking, and the converging cultures lend themselves to photos like the one above, taken by Roger Stonehouse of National Geographic. 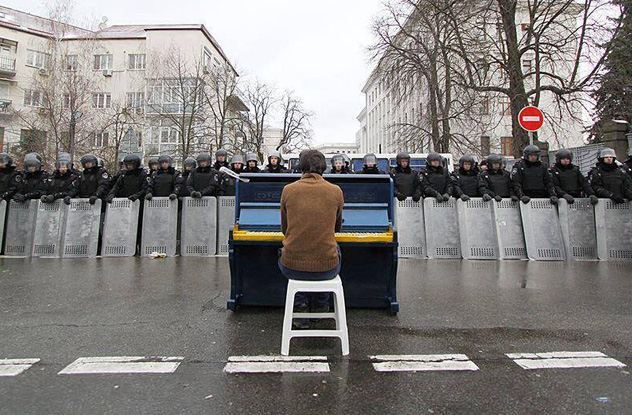 Ukraine smashed into 2014 in a violent state of political unrest. The BBC called early February 2014 its “bloodiest week in decades” as protesters clashed with riot officers after the government decided to strengthen ties to Russia rather than move toward European integration. For weeks, the city burned. Every altercation left more people dead, and even as the bodies piled up, the protesters grew in strength.

And in the middle of it all, one man played Chopin.

On January 25, the crowd fell silent as Markiyan Matsekh wheeled an upright piano in front of a line of riot police, calmly sat down, and began belting out classical tunes. It could easily be argued that this display of peaceful protest did nothing for the cause, as the most violent riots were still to follow, but it showed the world that not everybody in Ukraine wanted to attack the government’s policies with pitchforks and Kalashnikovs. With a few well-placed keystrokes, one man became a symbol for change by way of peace and reasoning. 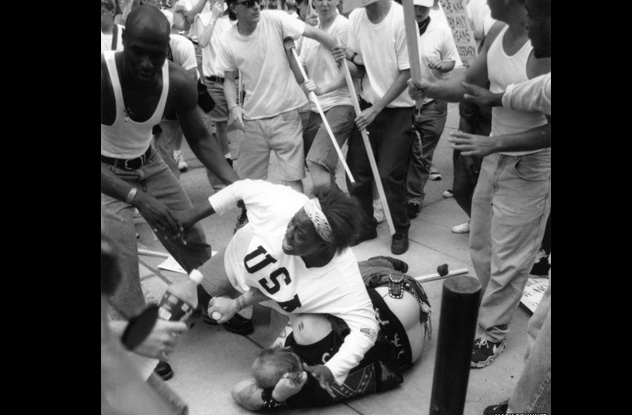 The division of black and white has tainted human history for centuries, and only in the past few decades have we stepped up to put a stop to such a superficial prejudice. Although we still have a long way to go, we’re moving in the right direction.

At least, it seems that way on the outside. But for every hateful stance taken by a group, there’s always going to be an individual who disagrees in spectacular fashion. Keshia Thomas was still in high school when a Ku Klux Klan rally was formed in her hometown of Ann Arbor, Michigan. It was 1996, and the Ann Arbor community had done their best to dispel the racial tensions that afflicted so many other communities in small-town America. But, in the face of that, there they were: the KKK.

Citizens lined up outside the rally to protest, and police stood by in case things got ugly. Keshia was one of the many African Americans at the rally, and she remembers hearing a woman with a megaphone shout, “There’s a Klansman in the crowd.” Soon, he was running, and the crowd was after him. Whether or not he supported the KKK, nobody knows. All they knew was that he wore a Confederate flag shirt and had an “SS” tattoo on his shoulder.

Soon, he was on the ground in the fetal position while blows and kicks rained down on him amid cries of “Kill the Nazi!” Keshia Thomas stepped in. With no thought for ideological differences, no thought of race or historical grievance, she threw her body over his to shield him from the blows, just one human protecting another. When asked why she did it, she said simply, “I knew what it was like to be hurt. The many times that that happened, I wish someone would have stood up for me.” 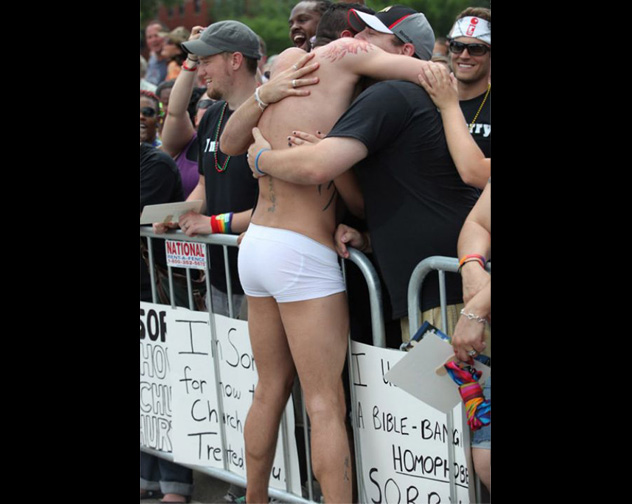 The Chicago Pride Festival is an annual celebration held in Chicago to bring awareness to the gay community. Every summer, nearly a million people flock to the two-day festival to show their support.

In 2010, photographer Michelle Gantner stepped out onto the crowded, rainbow-decked streets to snap a few photos of the event. What she grabbed became one of the seminal online images of the decade: a group of Christians offering an emotional hug to a gay man participating in the parade.

The group was organized by Andrew Marin, a Chicago resident trying to reconcile differences between the Christian community and the LGBT population of Chicago’s Boystown neighborhood, a state-recognized gay community within the greater Chicago area. The group appeared holding signs proclaiming, “I’m sorry for how the church has treated you.” 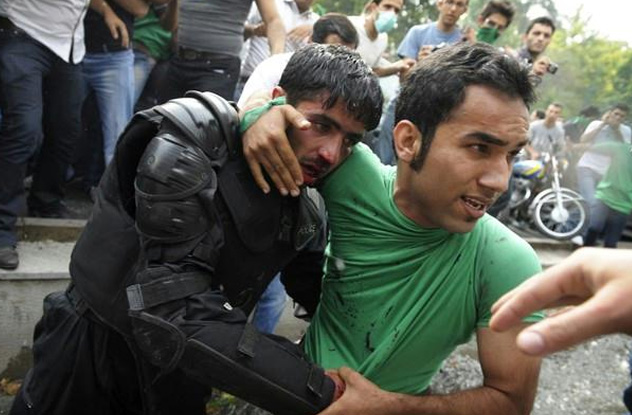 The aftermath of the 2009 Iranian election was a scene of mayhem. With 60 percent of the vote, hard-line incumbent Mahmoud Ahmadinejad retained his presidency amid cries of protest that he’d rigged the results. Supporters of losing candidate Mir-Hossein Mousavi took to the streets in a chaotic protest that left anywhere from 20 to several hundred protesters dead, depending on whom you ask.

Public opinion on the riot police working for the new president was shaky at best. Many had seen their friends and family members shot down by uniformed men, and many of those victims were never properly laid to rest. But when this unidentified Mousavi supporter (you can tell by the green shirt) saw an injured police officer, he stepped in to get him out of harm’s way before protesters could hurt him any further. 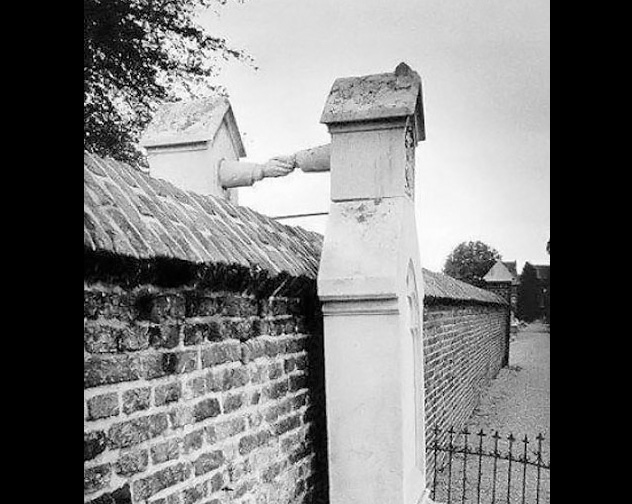 In a secluded corner of an old cemetery in Roermond, Netherlands are two gravestones on opposite sides of a high cement wall. One grave belongs to Colonel J.C.P.H. Of Aeffderson, an officer in the Dutch army and a Protestant. The other belongs to his wife, J.W.C van Gorkum, a Dutch noble and a Catholic.

The two were married for 40 years, and when the Colonel died, he was buried in the Protestant plot of the Het Oude Kerkhof, Dutch for “Old Cemetery.” According to tradition, his wife would be buried in the family tomb, across the wall in the larger Catholic section of the cemetery.

But van Gorkum didn’t see eye to eye with tradition. Before her death, she had a gravestone erected directly on the other side of the wall from her husband’s then had a hand built out from each one to reach over the wall. To this day, the lovers’ graves are still clasped in a final, eternal embrace. 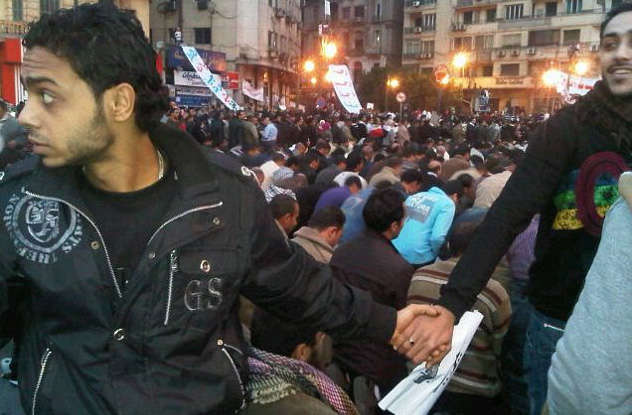 Cairo was a tough place to be religious in 2011. Despite being a purely secular movement, guided only by a desire for political change, the Muslim Brotherhood found themselves at the receiving end of a series of attacks, likely due to then-President Mubarak’s frequent statements on the dangers of an Islamic takeover.

In return, Coptic Christians, who make up a little more than 10 percent of Egypt’s population, were also targeted by Islamic extremists in several attacks. It seemed that even in a secular conflict, religion still couldn’t bow out of the fight.

And then came a touching scene: In Tahrir Square in Cairo, Christians formed a ring around Muslim protesters as they knelt in prayer. Mubarak’s government had previously carried out attacks on vulnerable groups of praying Muslims, and this nearly unprecedented show of solidarity drove home that, even in a region embroiled in religious differences, these protests had nothing to do with matters of religion. As Egyptians, they could stand together.

Later that week, a group of Muslims returned the favor, holding hands to protect Christian worshipers at Sunday Mass.

3An American Medic And A Nazi 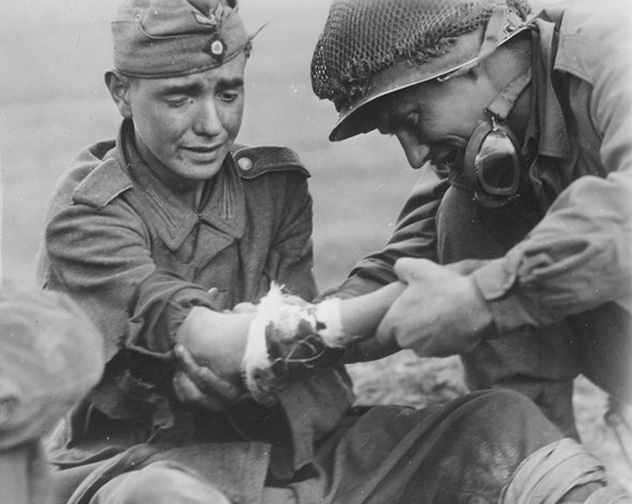 Long, brutal, and forever ingrained in the public consciousness, World War II epitomized the perceived struggle between good and evil. Even long after the last rifle was laid into a dusty veteran’s trunk, the villainy of the Nazis remains a catch-all for unfocused hate. We saw undeniable evidence of that in the KKK entry above—a gathering of housewives and schoolchildren transformed into a mob intent on murder at the drop of a hat. “Kill the Nazi” is our rallying cry against oppression, because there can be no wrong with such a thing.

But the above photo is difficult to reconcile with our worldview: It humanizes a Nazi. It transforms that weeping boy into every other child who was handed a gun and forced into a war that he may or may not have understood. Who is he? Did he commit previous atrocities? Did he go on to commit further ones? We don’t know because his life is now a mere snapshot, and in that fragment of time, he’s lost, alone, and scared. He’s merely one of us. 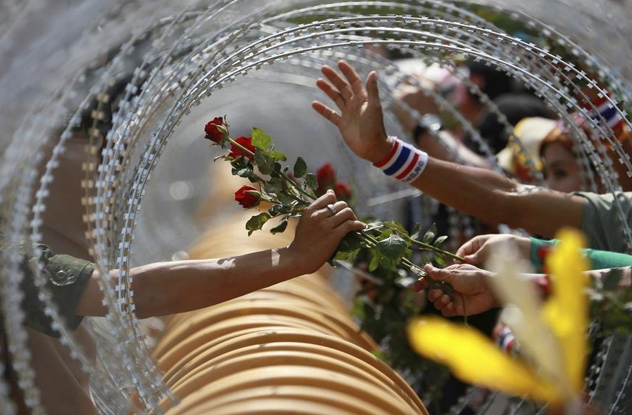 An image from the 1967 antiwar march on the Pentagon depicts a young, long-haired hippie placing a carnation into the barrel of a National Guardsman’s rifle. Since then, “flower power protests” have become nearly as iconic as that historic photo. Those nonviolent objects—the flowers, toys, and flags—were meant to signify a protest that wasn’t based on anger or hate.

In the above photo, taken in 2013, a protester uses the same tactic that inspired a nation nearly 50 years ago. The photo was taken at an anti-government rally in Bangkok, Thailand. Framed through a tunnel of razor wire, this photo carries the same weight as any other image showing military might held back—even if just for a moment—by the diaphanous frailty of peace.

1No Idea How To Hate 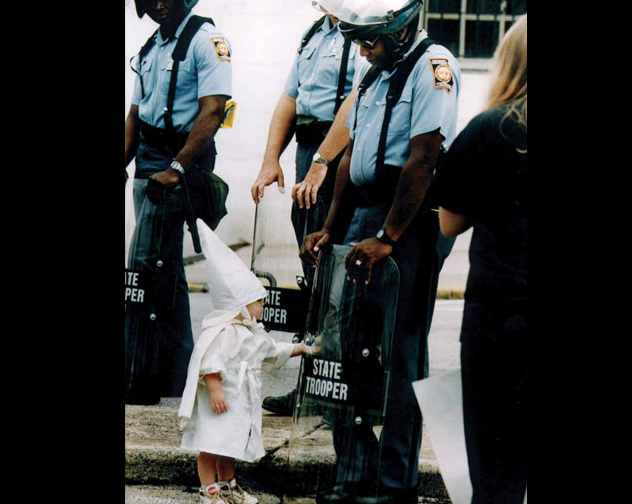 At what age do you look at a person and decide to hate them? That’s the stark tragedy offered by this photo—a toddler, too young to understand hate, brought to a place where hate is the main event. The mind recoils from the possibilities of what this child’s life went on to become. Indoctrinated so powerfully at such a young age, did he ever have a chance?

The photo was snapped by Todd Robertson at a KKK rally in Gainesville, Georgia in 1992. To hear him describe it, the moment was simple in its innocence: “One of the boys approached a black state trooper, who was holding his riot shield on the ground. Seeing his reflection, the boy reached for the shield.”

Immediately afterward, according to Robertson, the boy’s mother (also in Klan regalia) grabbed the boy and whisked him away. And that was it. For a single, cautious moment, two drastically different creeds met at a crossroads, pulled together against all odds by the touch of a curious child.