Musical instruments are extensions of people themselves and translate the surreal into the understood. This list takes a look at the strange beliefs of people all over the Earth and into their fascinating traditions of connecting the mysteries in our minds to the world heard through our ears. 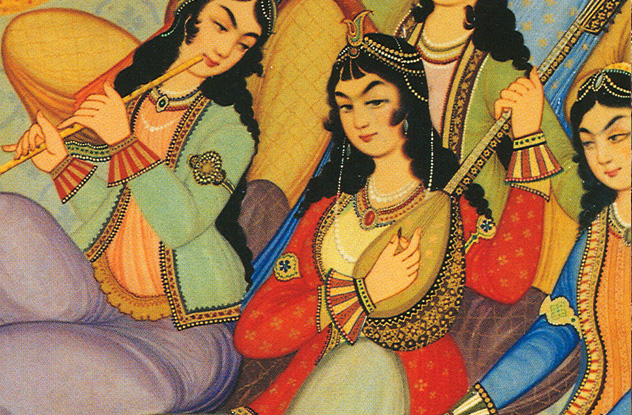 The tanbur is a category of stringed, wooden instruments with long necks and resonating bodies, known by several names, including the tambur, tanboor, tar, and lyre. The forefather to modern guitars, it originated in Mesopotamia and southern and central Asia several thousand years ago.

While many cultures adopted similar styles of this instrument for various purposes, one of the earliest recorded uses of the tanbur was one of healing, calming, and creation of inner equilibrium. This symbolism was seen prominently in a religious cult of northern Africa and the Middle East during the 18th century known as Zaar (Zar). This superstition focuses on the duality of good and evil and the possession of human spirits by malevolent forces.

The Zaar ritual often involved a ceremony of wild, droning music that slowly entranced the possessed into a frenzy, cleansing the spirit with music and song. Typically, a specific set of instruments were central to the Zaar, including most notably the tanbur (tar), tambourine, chanting, and rhythmic drums. 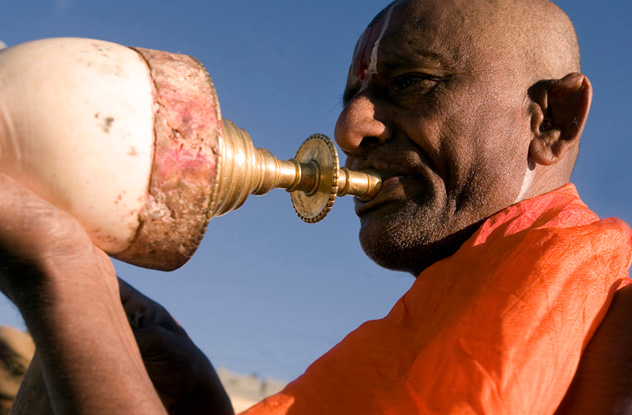 The conch horn is a wind instrument constructed out of seashells or large sea snails and has been used by various cultures ranging from the Caribbean to Mesoamerica, India, and Tibet, as well as New Zealand and the Pacific Islands. These shells were simply blown into, and the inner shape created a loud trumpet-like sound.

In India, according to Hindu tradition, the horn remains a sacred symbol of the god Vishnu, representing female fertility, prosperity, and life. Here, shells can even be considered sacred, depending on their color and which direction the shell curls. Shells that curve clockwise are considered to be very sacred, as their curves mirror the circular motion of the Sun, Moon, stars, and heavens.

In Mesoamerican and Caribbean tribes, the instrument was central to hunting, war, and prayer rituals. The ancient city of Teotihuacan in present-day Mexico had strong symbolic ties to the conch shell. It was widely depicted in artwork and used in ceremonies that celebrated water and male fertility. Its shape evoked the impression of water flowing outward, nourishing crops and people, and creating new human life. In this context, the horns represented male virility and sexuality; warriors and men of high status were buried with conch shells, found on headdresses or near the pelvis.

Alternatively, in various Pacific island cultures such as Fiji, the conch horn was used to announce the arrival of guests into a village or in funeral ceremonies, where its sound would accompany the body of a deceased chief to the end of his life’s path into burial. 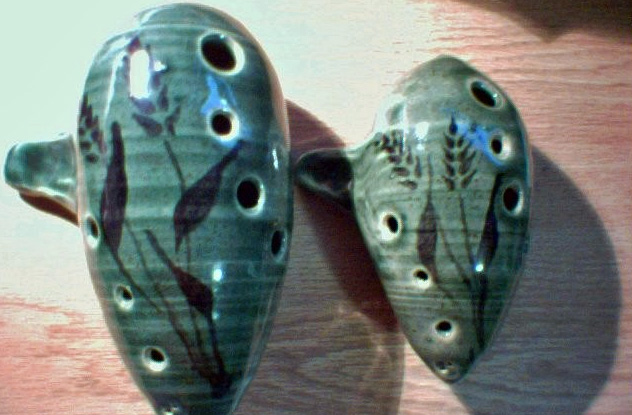 The ocarina is a small handheld wind instrument believed to have originated near 10,000 B.C. Traditionally constructed from bone or clay, it is also made of many substances such as stone, wood, plastic, or metal. This instrument consists of a hollow chamber, with a protruding mouthpiece and 4–12 holes that are covered by fingers to produce various sounds. Ocarinas with special shapes, including animals, humans, gods, or monsters, have also been unearthed in Central and South America.

Historically, they were used in rituals of Mesoamerican cultures, where they produced beautiful, surreal tones that could speak to the gods, charm birds and animals, and even send humans into a mysterious, trance-like state. More recently, the ocarina was popularized in the video game The Legend of Zelda: The Ocarina of Time, where the item granted the player the ability to control the weather, teleport between locations, open doors, and even travel through time. 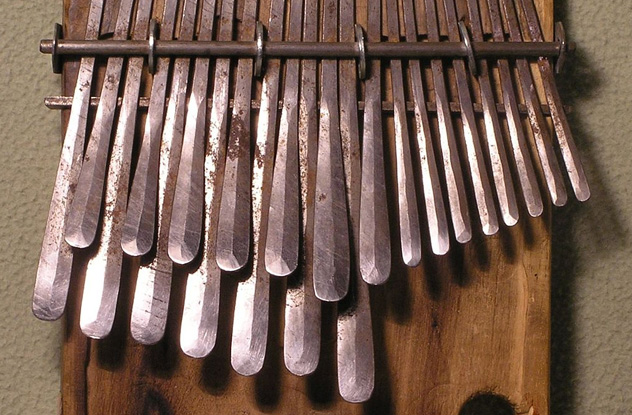 The mbira is a handheld instrument created by the Shona people of present-day Zimbabwe over 1,000 years ago. It consists of a series of metal tines, or plucked metal bars, mounted on a wooden sound board and exists in many sizes and configurations.

Traditionally, this instrument has held a key position in the spirituality of the Shona, who maintain strong connections to the spirits of their ancestors. Used as a “telephone to the spirits,” the mbira allows them to speak with tribal spirits and ask for guidance, accompanied by songs, prayers, and poetry. This is most common during the Bira ceremony, a rite of spiritual possession, where spirits are called to participate in the remembrance of community wisdom and tradition. The Shona also use the music of the mbira to control the rain and drought cycles for crops, heal the sick, and scare away harmful spirits. 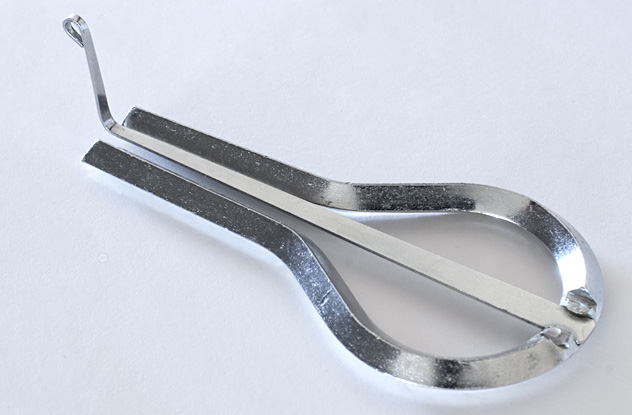 The mouth harp, also known as a Jew’s harp or jaw harp, is a plucked instrument consisting of a frame that holds a vibrating reed, made of metal, reed, or bamboo. Held between the teeth, the reed is played with the fingers, and its vibrations are modified by changing the shape of the mouth. Its origins can be traced to fourth-century China, but its more modern metal design, adopted by many European, Oceanic, and Asian cultures, is believed to have evolved near the 13th century.

The jaw harp has been used for centuries in shamanistic rituals and incantations by Mongolian and Siberian tribal peoples, said to induce trances and heal sickness. It also has been used for spiritual healing and connection to the natural world in other places such as Malaysia and Indonesia, where its sound mimicked and communicated with the birds, insects, frogs, and plants of the rain forest, curing melancholy and sadness and passing away idle time. 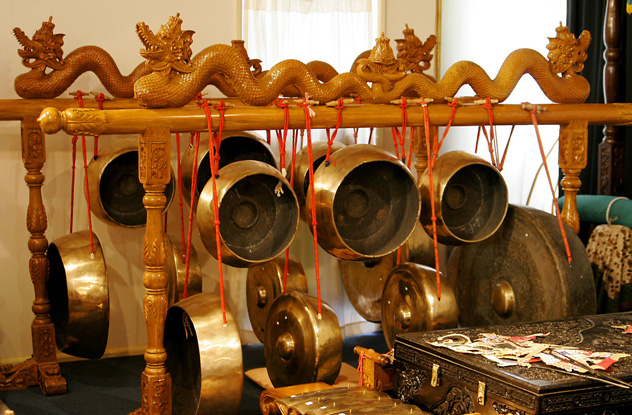 The gong is a metal percussion instrument that originated in China around 3,500 B.C. and has been adapted by various cultures throughout Southeast Asia and Africa. It is a large, simple disc of metal, usually bronze or brass, which is suspended and struck with a mallet to produce a crash or low, billowing tone. It is said that the gong is named for the sound that it produces, that “it is what it does.”

While used traditionally for festivals, prayer, and the announcement of sacred ceremonies, its loud, distinctive sound was also ideal for communication. For example, in the coastal Zhejiang Province, gongs were used at wharfs, where they attracted guests disembarking from ships and even signaled ships near land in times of heavy fog or low visibility. The playing of the gong was associated in ancient Buddhism with rituals of healing, prayer, and meditation. Throughout Chinese history, gongs have often been regarded as sacred, and it is believed that the essence of the gong-maker is imbued within the metal itself. If a person were to touch a gong, that person would be gifted with happiness, luck, and good health. 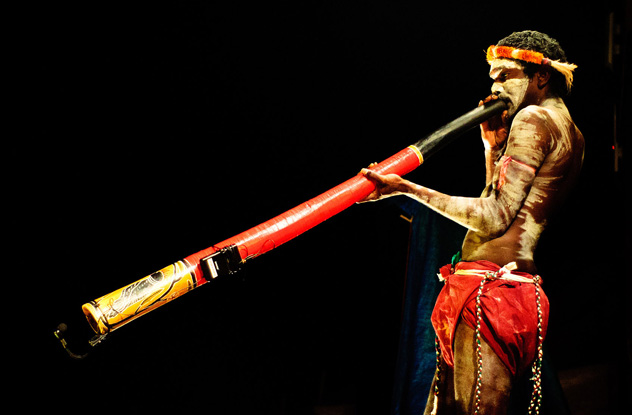 Aboriginal peoples of northern Australia developed this strange wind instrument over 1,500 years ago. Called by many names by various tribes, and still in use to this day, the didgeridoo is a long, wooden, pipe-like horn created by hollowing out a dead wooden limb and coated on one end with wax. It is played by blowing into one end of the pipe, creating a low, eerie, harmonic drone. Skilled players may even use circular breathing techniques to maintain a note for over 45 minutes.

Said to embody the voice of the Earth itself, the didgeridoo has long accompanied aboriginal song and dance ceremonies, representing their connection to nature and the invisible spiritual realm. According to aboriginal tradition, understanding the sounds and patterns of weather, nature, and animals, and imitating these phenomena with the droning melody of the didgeridoo, creates a shared consciousness between people and the Earth. 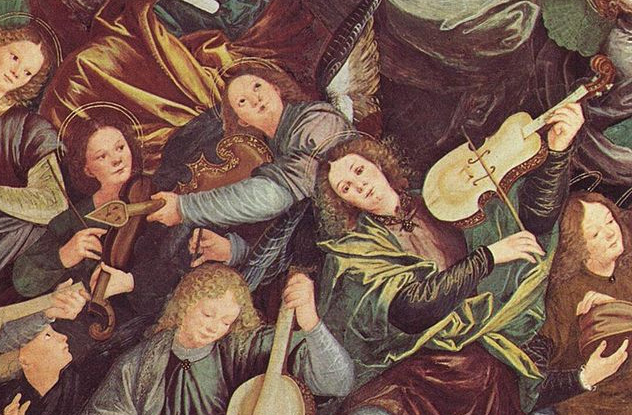 The mythology of the violin, a wooden stringed instrument played with a bow, exists in American folklore and may even have roots to the Old Testament of the Bible as well. In old Abrahamic religious lore, it is believed that the voices of angels represented a connection with God, while the voice of the devil, God’s counterpoint, manifested through the sounds of man-made instruments. This myth has mysteriously evolved in Western culture, supposedly through the development of the violin in recent centuries at the onset of the Protestant and Catholic reformations.

Over time, the image of the devil as a “wicked fiddle player” has evolved and gained acceptance. This has been seen most recently in a 1979 song by The Charlie Daniels Band, “The Devil Went Down to Georgia,” a tale about a skilled violin player named Johnny who battled the devil in a fiddling contest, betting his soul against the devil’s magical golden fiddle. 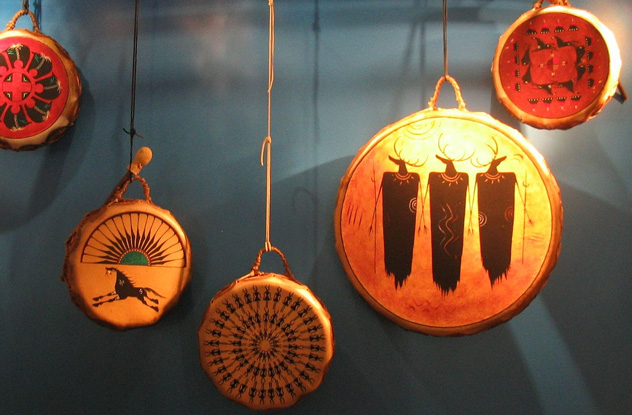 Among the oldest and most varied of all musical instruments, drums have origins in nearly all ancient human cultures. Simple objects made of wood, metal, or skin and played with sticks or by hand, drums have been used for tens of thousands of years in prayer rituals, war, communication, and dance.

In ancient Mesopotamia, over 8,000 years ago, it is believed that drums were used to create sacred sounds during tribal meetings, ceremonies, and battle. Additionally, in various parts of Africa, “talking drums” were used as communication tools, making music that could travel long distances between villages and across vast plains. The people playing these drums used different techniques to mimic the human voice, creating sounds that corresponded to words and phrases. This different form of speech was often used in rituals of praise, where the sounds created by specific drums represented different deities and spoke with them in unique ways that people in the tribe could easily recognize.

This fascinating and terrifying musical instrument originates from the ancient Aztec culture, where it was used for a variety of macabre and frightening purposes. These hollow whistles were usually carved into the shape of a skull out of clay, bone, stone, and even jade. Their shape represented the emotions it was meant to instill in its listener: fear and awe. When blown into, it creates a ghastly “scream” sound, like the wind rushing at a furious pace.

Death whistles were widely used in ceremonies attributed to the god of wind, Ehecatl, and Mictlantecutli, the concept of the “Wind of Death.” Aztec priests were said to have used these whistles during human sacrifice rituals, where their sound was believed to help guide the soul of the sacrificial victim to the afterlife and appease the gods. Alternatively, death whistles may have also been used in healing rituals or in battle, where a large group of warriors playing these instruments would have surely terrified their foes with a deafening wall of screams.

Andy is a freelance web/graphic designer who currently lives in three different continents and is fascinated by weird, morbid, and interesting facts about science, technology, and music.