It’s 2021 and the world has changed. But the beauty of Earth’s most mysterious locations remains. These places are steeped in history and legend and make for mesmerizing photographs. Some which are easily accessible have become tourist fodder, while the ones that are harder to reach remain somewhat hidden away except for a series of images taken and posted online by a brave explorer. On this list are just some of the mysterious places around the world, some so extraordinarily stunning that it’s hard to believe the images are real. 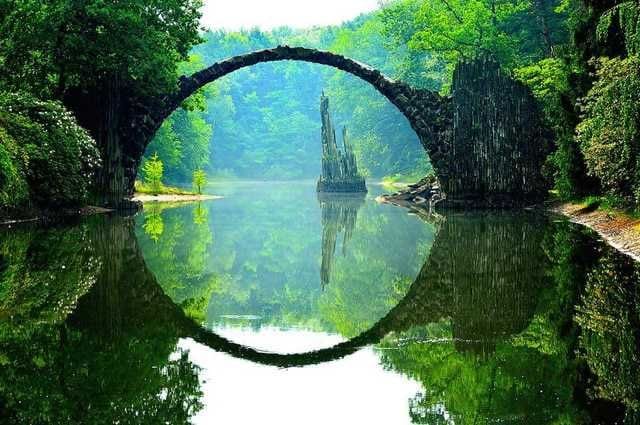 The enchanting Rakotzbrücke is any Instagrammer’s dream. This man-made, semi-circle bridge is located in Kromlau Park, Saxony, Germany and has been given the nickname ‘Devil’s Bridge’ because of the mythical stories surrounding it. The bridge has become widely popular over recent years because of the illusion of a perfect circle created when it reflects just the right way in the lake below, giving it a truly other-worldly look.

Legend has it that devil’s bridges such as Rakotzbrücke, were built with the help of the devil himself in exchange for the soul of the first person who crosses it. In the case of the Saxony Devil’s Bridge, the superstitious are of the opinion that humans could not have accomplished the delicate arch and therefore the devil must have been the one who built it. Devil’s bridges are characteristically constructed from stone and include masonic arches. Some believe that Rakotzbrücke becomes a portal to another world when the reflection completes the bridge’s circle and a full moon shines brightly overhead. Looking sideways while crossing through the ‘perfect circle’ will cause the devil to appear in the water where he waits for the next soul to drag with him to hell…[1] 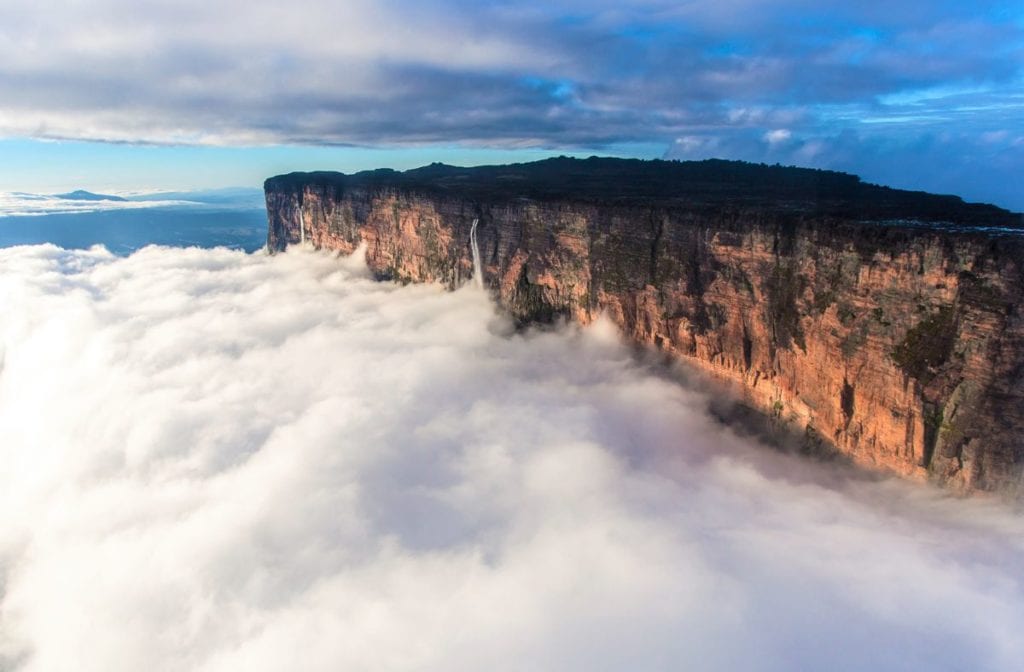 Known as the ‘floating island of Venezuela’, Mount Roraima is a flat-topped mountain (tepui) located at the point where Brazil, Venezuela and Guyana meet.
Long before anyone even thought of hiking up Mount Roraima, the Pemón Indians living nearby regarded it as an unmissable part of world history. According to legend, a great tree that bore fruits and crops for the Earth was cut down by an ancestor of the ancient Indians. The tree caused a huge flood after crashing to the ground and its trunk was the only thing left after the incident. The legend further has it that the trunk is Mount Roraima and that the rivers flowing into it are the territory of these ancient people.

Since the advent of hikers and tourists, there have also been multiple reports of UFO sightings with people reportedly having seen strange lights above Mount Roraima. Others have reported experiencing an altered state of mind while visiting the site, and even having bizarre dreams of aliens.[2] 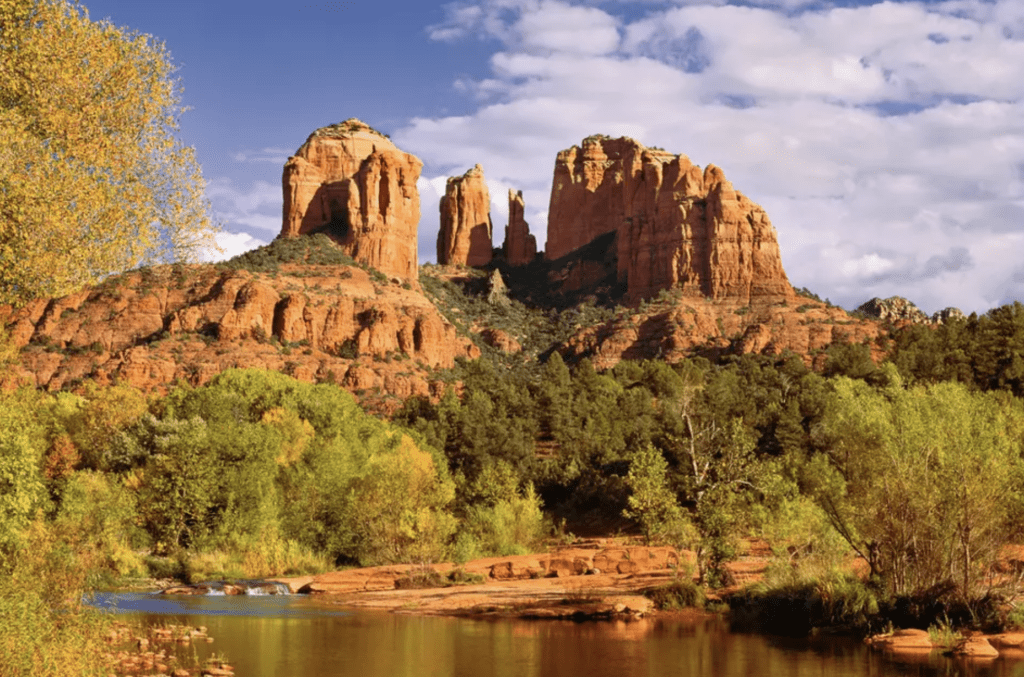 Sacred sites dot the map worldwide. Along with some of these sites, those who are curious might also find vortexes or vortices. These are ‘special spots’ where energy is said to either enter the earth or project outwards from its plane. Some of the most well-known and hugely popular vortex sites include Glastonbury in southwestern England, Stonehenge in Wiltshire, The Great Pyramid of Giza in Egypt and the Mayan Ruins in Tulum, Mexico.

America lays claim to major energy vortices in the city of Sedona, Arizona. Those who take the supposed power of vortices to heart, flock to Sedona in droves, in search of spiritual healing. The most visited site is the Airport Mesa Vortex where people are encouraged to hike the strenuous path to the top and enjoy the spectacular views while looking out for colored orbs. It is believed that the Airport Mesa Vortex is an Upflow area that enables your spirit to soar to greater levels of serenity. 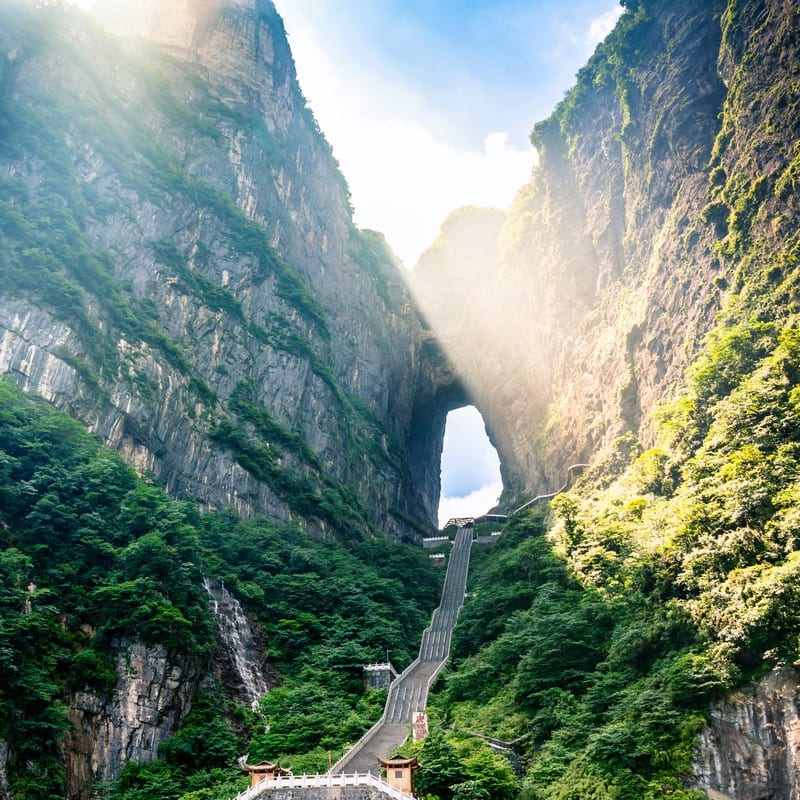 Tianmen Mountain in China is regarded as a holy mountain. Its sacred reputation has been strengthened by the ‘Stairway to Heaven’ that comprises of 999 steps leading to Tianmen Cave; the world’s highest naturally formed arch. Tianmen Cave is where ‘the gods meet the mortal world’ according to Chinese legend and it attracts millions of visitors every year. It is believed that erosion caused by water and soil led to the formation of the cave. 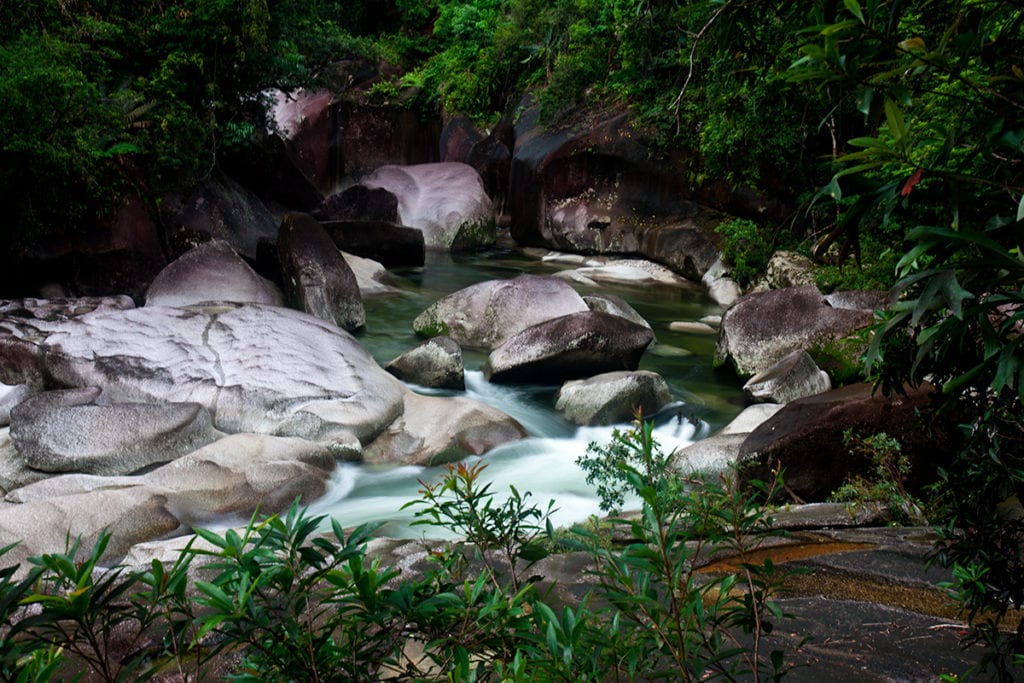 Devil’s Pool in Queensland, Australia is as deadly as it is stunning. Large boulders, called the Babinda Boulders, fill the creek bed. Legend has it that a young woman named Oolana from the local Yindinji Tribe, broke her promise to stay married to a tribal elder, choosing to run away with a young warrior, Dyga, from another tribe. The couple were captured and Dyga was taken away by the elders. In her despair, Oolana threw herself into the Devil’s Pool and her sobs became the torrents rushing through it. To this day, locals believe that Oolana still haunts the pool, dragging unsuspecting men to their death.

Since 1959 there have been 19 deaths at Devil’s Pool of which 17 were men who drowned. Aboriginal locals tell the story of a young man who vanished beneath the water after kicking at a plaque that commemorates those who have died. In another story, two lovers stood together on the rock platform overlooking the pool when an errant ‘wave’ swept them both into the water. The girl survived but her male partner did not.[5] 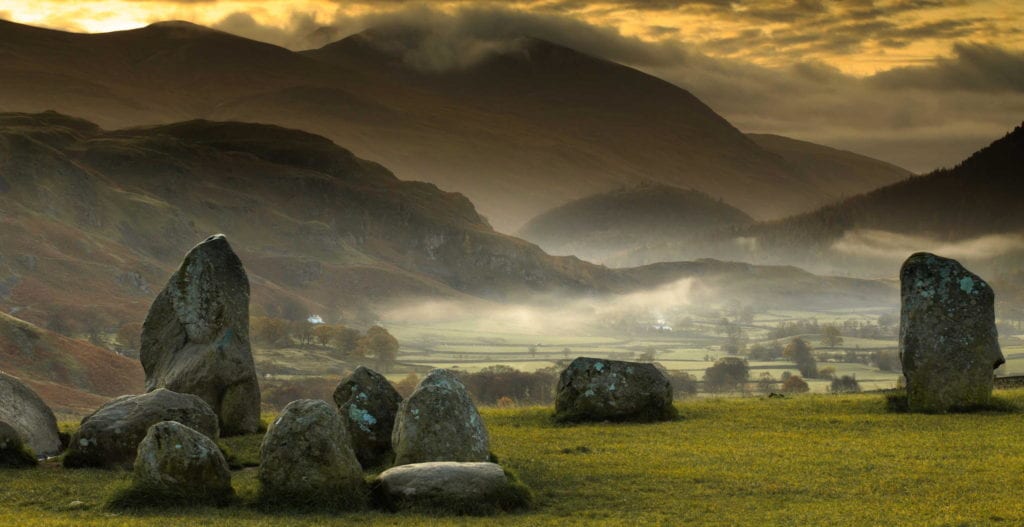 Near Keswick in Cumbria, North West England, stands a circle of 38 Neolithic stones. The circle is thought to have been constructed as part of a megalithic tradition during the Late Neolithic and Early Bronze Ages. To date there have been no extensive excavations at the site and it remains unclear what may be buried beneath the surface and perhaps between the stones.

Much like the other stone circles to be found in the UK, it is not clear exactly what the purpose of the Castlerigg stone circle was. Experts are not convinced that it was a burial site, with some believing it may have been aligned with lunar cycles.

English poet and philosopher, Samuel Coleridge, mentioned the Castlerigg circle in his writings in 1799, saying “The Mountains stand one behind the other, in orderly array, as if evoked by and attentive to the assembly of white-vested Wizards.”[6] 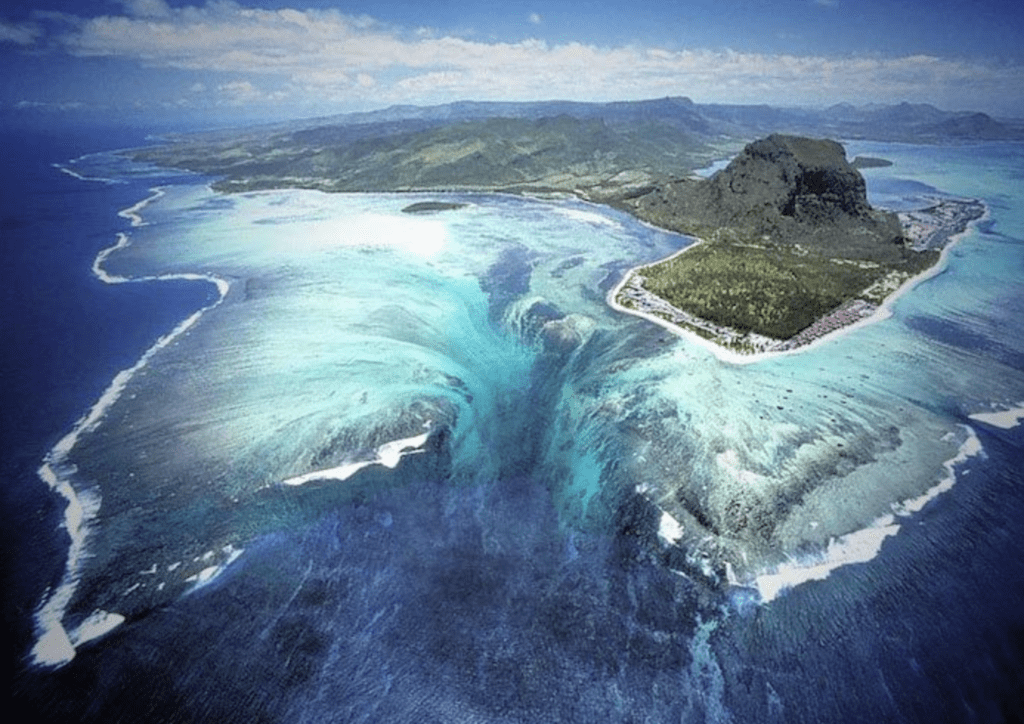 In the grand scheme of history, Mauritius is a relatively young island which sits on an ocean shelf that is raised over seabed level. Off the coast of the island known as Le Morne Peninsula, various shades of blue can be observed in a gradual slope that drops off into a 4000-meter deep ‘abyss.’ Because of the constant movement of sand and silt along these shaded slopes, an optical illusion of an underwater waterfall has been created.

The exact site of this illusion was once the center of a local legend. In 1835, slavery was abolished in Mauritius, and authorities were sent to a community of runaway slaves to give them the good news. Unfortunately, the slaves misinterpreted the sudden arrival of the policemen and instantly made the decision to run to the cliffs overlooking the ocean and jump into the water, committing mass suicide. This tale has been become woven into the fabric of the background story of the ‘waterfall’ with some believing that the spirits of the dead slaves are responsible for the spectacular optical illusion.[7] 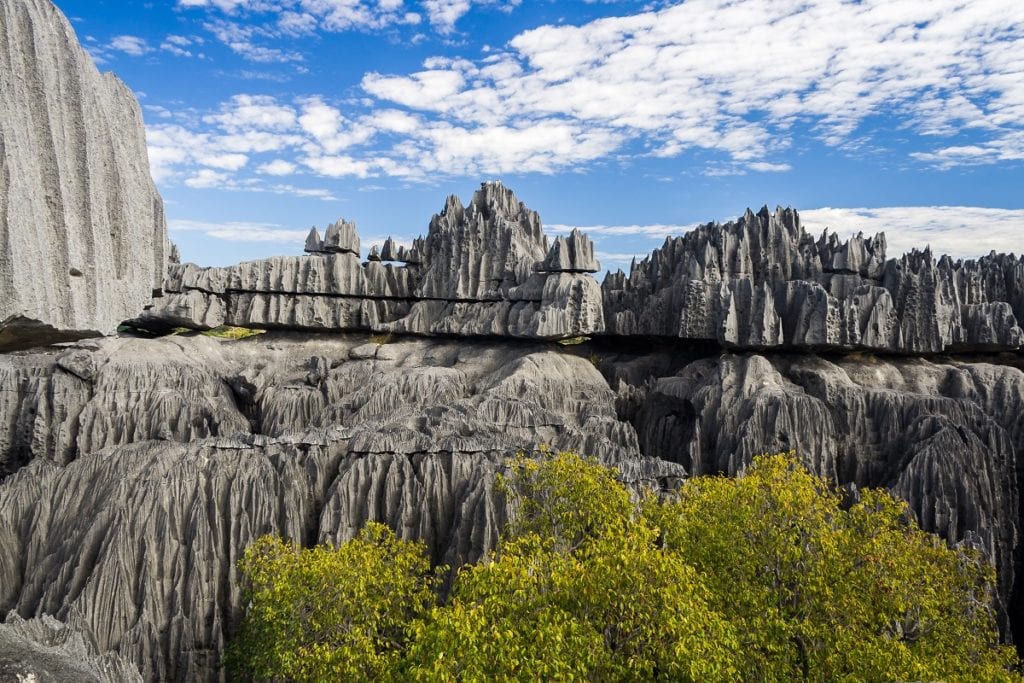 Even though Madagascar is the world’s fourth largest island, it still took humans 300,000 years to discover. As highlighted by the animated film, Madagascar, it is home to dozens of lemur species and more than half the world’s chameleons. It is here that you will find the Avenue of the Baobabs as well as Skyscraper City, aka the world’s largest stone forest. The ‘forest’ is made up of limestone spiky grey rocks known as Tsingy, which means ‘’walk on tiptoes.” Its origins date back to 200 million years ago when tectonic activity pushed a limestone bed upward from the bottom of a lagoon. Falling sea levels allowed the pushed-up stone plateau to become exposed and over time the ‘forest’ came into being.

There are several walkways and bridges that allow tourists to get up close to the stony wonder, without hurting their feet on the sharp rocks. And while it may seem like a completely inhospitable environment, you will find 11 different species of lemur here.[8]

2 The Tree on the Lake 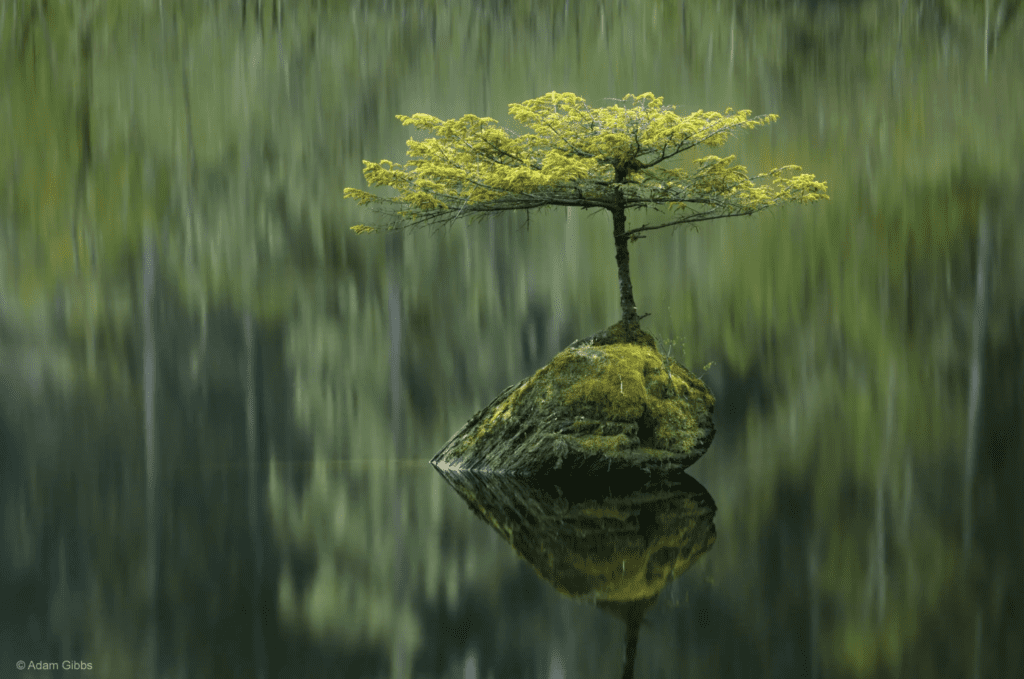 The aptly named Fairy Lake in Canada is famous for more than its glittering waters and tranquil atmosphere. Out of its still surface protrudes one end of a dead Douglas fir tree log. On top of the log grows another tiny Douglas fir tree, the log as its only source of nutrients. The little tree is in a continuous struggle to survive and this has inspired many a photographer to document it on film.

Every so often, the water of the lake rises, and covers the tree stump making the little tree look like its floating just above the surface. Tourists have taken to calling the tree the “Fairy Bonsai” and often line up in the logging road next to the lake to catch a glimpse of it.[9] 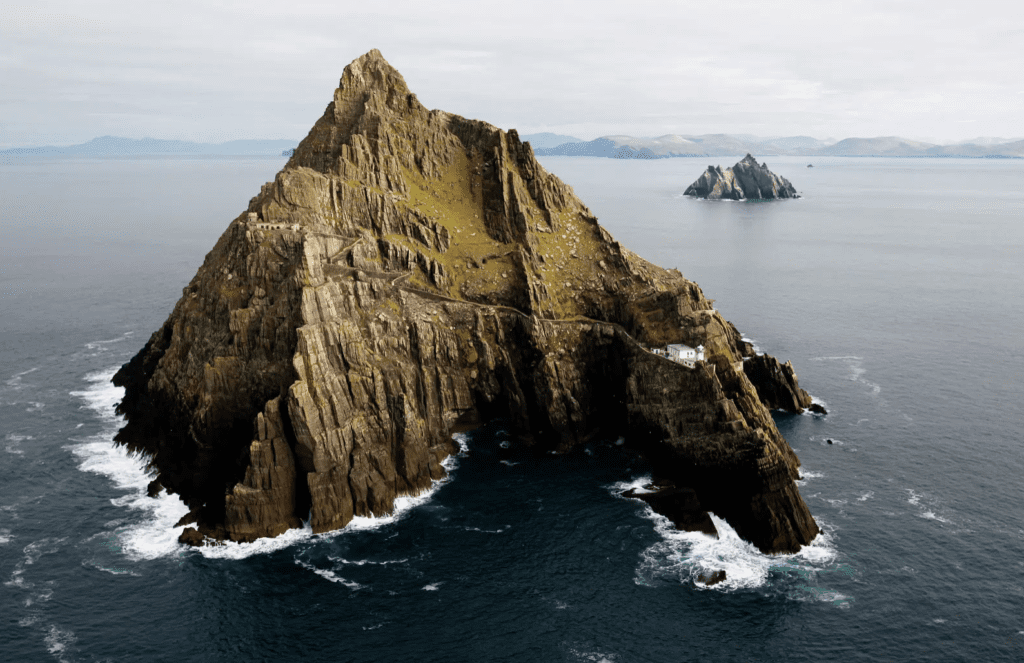 Skellig Michael is an island off the coast of Kerry, Ireland which was used as a location in the filming of Star Wars: The Force Awakens. The publicity did wonders for tourist numbers and by November 2015 the island had received its highest number of overseas visitors ever.

Skellig Michael, which means ‘Michael’s Rock’, is also home to a 1400-year-old preserved monastery. There are two oratories, a cemetery, and a monolithic cross on the island. Evidence shows that the island had been attacked by Vikings several times which could have caused the monks that lived in the monastery, to flee to the mainland. To ensure the further preservation of the fragile monastery, limits have recently been placed on the number of tourists allowed to visit it.[10]

10 Unsolved Pirate Mysteries That Will Shiver Your Timbers