Politics makes strange bedfellows. When there are goals that must be accomplished, differences can be set aside to reach common ground despite clashing ideologies or vastly different opinions. What follows are some of the unlikeliest alliances and friendships ever forged in the arena of politics. 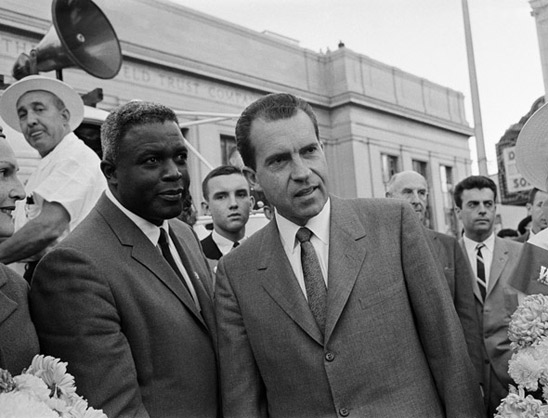 Jackie Robinson is among the most recognizable figures in the history of civil rights, first for breaking baseball’s color barrier in 1947 and then for devoting the remainder of his life to the movement. Given his total dedication, it seems difficult to believe that Robinson staunchly supported Richard Nixon and not John F. Kennedy in the 1960 presidential election. Robinson publicly endorsed Nixon, saying that he believed that Kennedy was “insincere” in his commitment to the civil rights cause.

He continued to support Republican candidates until 1964, when the party tapped Barry Goldwater over the Robinson-backed Nelson Rockefeller. Goldwater opposed the Civil Rights Act, and Robinson ultimately voted for Lyndon Johnson in 1964.

When Nixon ran for president again in 1968, Robinson and Nixon’s political friendship ended. Robinson was angered by Nixon’s association with Senator Strom Thurmond, a “Dixiecrat” from South Carolina who had continually supported segregation. Robinson instead supported Hubert Humphrey on account of his long history of support for civil rights. (Nixon’s political friendship would not be the last odd alliance he formed, however, as he appears again on this list.) 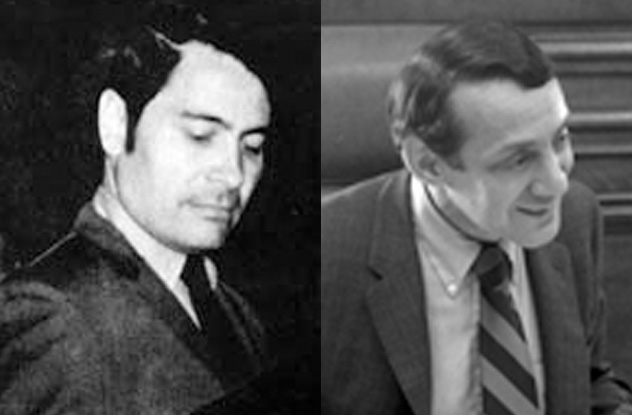 It seems unlikely that the man ultimately responsible for the largest loss of American civilian life in a deliberately planned act (until the attacks of September 11, 2001) would become an ally of one of the more revered political activists of the 1970s, but such was the case between Jim Jones and Harvey Milk in San Francisco. Milk courted Jones’s support during one of his many initial campaigns, and Jones’s followers at the Peoples Temple assisted Milk in distributing campaign materials.

Milk reached out to Jones via letter, saying, “Our paths have crossed. They will stay crossed. It is a fight that I will walk with you into. The first time I heard you, you made a statement: ‘Take one of us, and you must take all of us.’ Please add my name.”

Even though Milk’s letter contained the “kind of awed reverence that the cult leader demanded from his followers,” he remained wary of Jones and told his supporters to be very careful around the Peoples Temple. 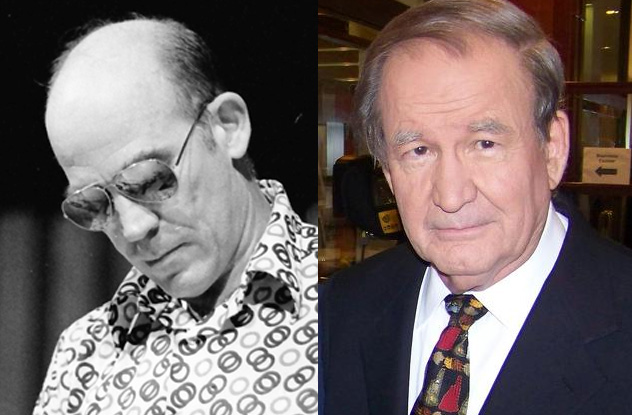 If one were to bring up Richard Nixon in the company of Hunter S. Thompson, it is very likely that some very colorful language—and quite possibly the threat of violence—would follow. Thompson hated Nixon with a passion, so it’s odd that Thompson and one of Nixon’s closest advisers—Pat Buchanan—considered each other friends. Buchanan was with Nixon from the mid-’60s all the way to the end of the Watergate scandal, so Buchanan’s connection to Nixon was far from minor.

Thompson once referred to Nixon as “a political monster straight out of Grendel,” who could “shake your hand and stab you in the back at the same time.” And that was among the nicer things he wrote about him.

Thompson said on multiple occasions that he “admires” Pat Buchanan, recognizing the “quality in the enemy.” Give the “Good Doctor” credit for being able to look past one’s associates when making a character assessment. 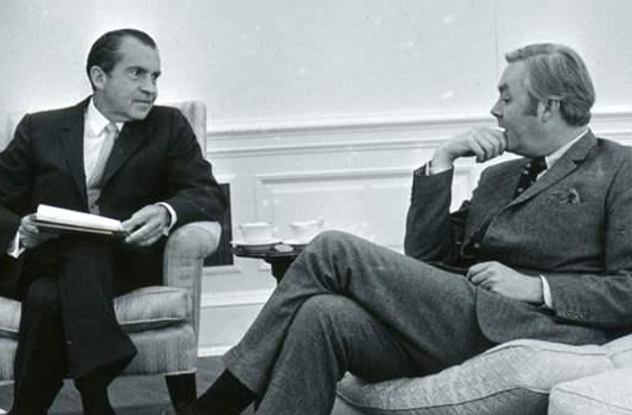 After hearing a speech delivered by Moynihan titled “The Politics of Stability,” Nixon and his staff recruited the Harvard and MIT professor—a Democrat—to become the assistant to the president for urban affairs. The staff job was considered politically risky given the proximity with which Moynihan and President Nixon would be working. Thanks to the union, however, Moynihan “managed to persuade Nixon to embrace a much more liberal approach to welfare than most of his White House team would ever have supported.”

Stephen Hess, who authored a book detailing the unusual political pairing, has referred to Moynihan and Nixon as the “the oddest couple that you could imagine.” Part of the reason that the relationship worked so well, at least according to Hess, was Moynihan’s treatment of Nixon as an intellectual. He convinced Nixon to adopt policy that was “historic,” a strategy of flattery that ultimately transformed welfare in a way that would have not otherwise been possible. 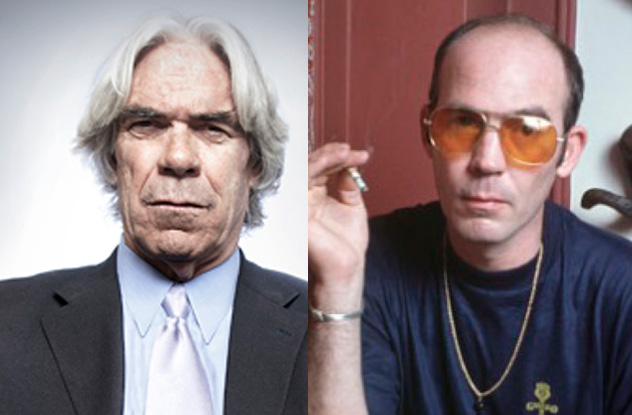 It is indeed rare that a man running for sheriff would find himself an ally in the county’s most infamous outlaw, but such was the case with Pitkin County Sheriff Bob Braudis and Hunter S. Thompson. Braudis ran for the position of sheriff in 1986 and won, a position that Thompson had also unsuccessfully run for over a decade before.

When Thompson campaigned for sheriff, Braudis’s predecessor openly declared that charging Thompson with law enforcement would lead to more murder. Thompson shaved his head bald and referred to his adversary Carrol Whitmire—who had a crew cut—as his “long-haired opponent.” He promised to rename Aspen “Fat City” to deter developers from capitalizing on the name “Aspen.”

While Whitmire and Thompson failed to see eye to eye, Braudis and Thompson not only found common ground—they established a quarter-century-long friendship. According to Thompson, Braudis was the only police officer in the United States to “speak Latin, downhill ski like the ghost of Jean-Claude Killy, and discuss Aristotle while making pat-down arrests,” while going on to describe him as “a freak at heart with the morality of Saint Francis of Assisi. No stuff like sex, drugs, and rock ’n’ roll. As a cop, his judgments are judicial and therefore honorable . . . He’s the [kind of] righteous knight that Clarence Darrow would have saluted.” 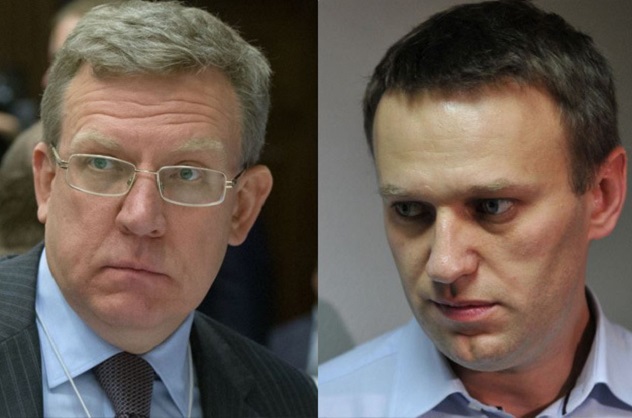 Russian politician Aleksei Navalny has been at the center of a great deal of unrest in Russia of late. Currently under house arrest after receiving a suspended sentence for allegations of embezzlement, Navalny was the leader of demonstrations against Russian president Vladimir Putin several years ago, which is why it is strange that he would find himself aligned with a close friend of Putin’s.

Aleksei Kudrin served as finance minister before resigning from the position in 2011. In 2012, he criticized the Kremlin for the use of what he termed “confrontational rhetoric” toward opponents of those currently in power. Kudrin’s assertion was strange considering his past association with Putin and the Kremlin, and he has continued to support Navalny while criticizing the authorities. Most recently, he said, “The authorities could have easily put Navalny in jail. But they understand that it would have led to a large wave of protests. So they will torture him through other means.” 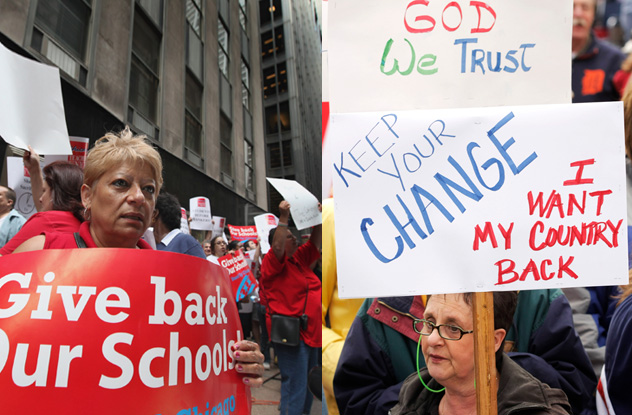 Contention over the Common Core education mandates has resulted in some very unlikely political alliances. The typically Democratic-leaning teachers unions have found an unlikely ally in the staunchly conservative members of the Tea Party in the fight against the Common Core federal mandates.

In most cases, teachers unions support federal mandates, such as those in support of special education and other programs. In the case of the hotly debated Common Core, however, the teachers union agrees with the Tea Party that the federal government should not intervene when it comes to designing the curriculum or in gauging student progress according to standardized testing. Common Core did not create just one odd political alliance, as President Barack Obama has also found himself oddly aligned on the issue with the massive energy corporation Exxon-Mobil and the US Chamber of Commerce. 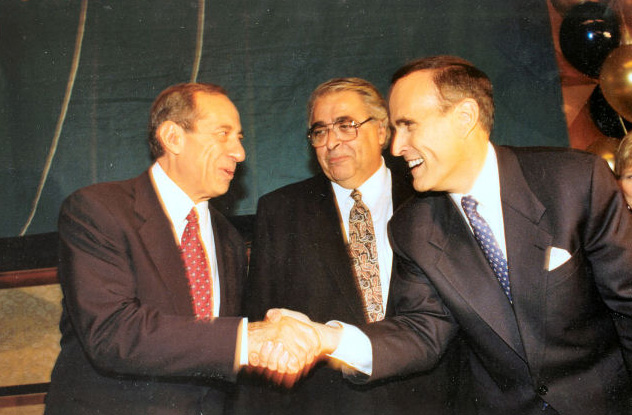 Mario Cuomo, then seeking a fourth term as the Democratic governor of New York, found an unlikely ally in Rudy Giuliani, the first Republican mayor of New York City since John Lindsay in 1966. (Lindsay eventually switched to the Democratic Party while still in office.) It was quite unlikely that Giuliani would privately support Cuomo, let alone publicly endorse him in his campaign, so it came as quite a surprise when Giuliani announced that he was backing Cuomo instead of the Republican candidate George Pataki.

Part of the reason for Giuliani’s support of Cuomo was their shared contempt for then-Senator Alfonse D’Amato, who was seen as an ally of Pataki. Giuliani would later say of Pataki that his “only essential characteristic is that he offers an alternative,” and that Pataki “best personifies the status quo of New York politics—a candidate taking as few positions as possible, all of them as general as possible, taking no risks and being guided and scripted by others. He has simply not made the case that he is the agent of change.” 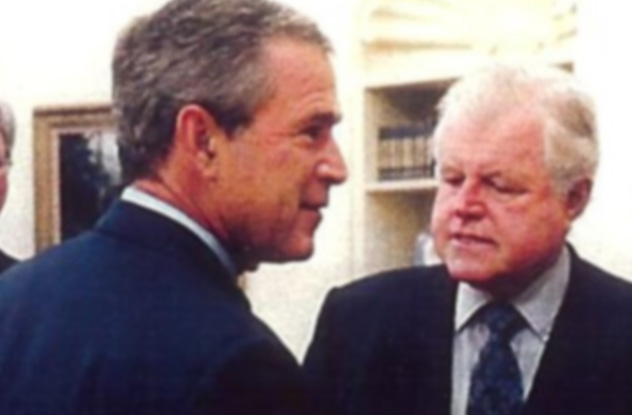 The political friendship between George W. Bush and Senator Ted Kennedy of Massachusetts began with an agreement over an education bill in 2002, and it continued on for the remainder of Bush’s years in the White House. Bush, a Republican president, and Kennedy, a liberal Democrat, formed quite an unlikely pairing that ultimately yielded many common-ground compromises while also producing bitter acrimony at times.

Kennedy disagreed loudly with the president’s actions relating to Iraq, the poor response to Hurricane Katrina, and tax cuts, but these disagreements did not prevent Kennedy and Bush from working together numerous times throughout the Bush presidency. The pair forged ahead on issues such as education and immigration, and Bush jokingly remarked that “the folks at the Crawford [Texas] coffee shop would be somewhat in shock when I told them I actually like the fellow.” 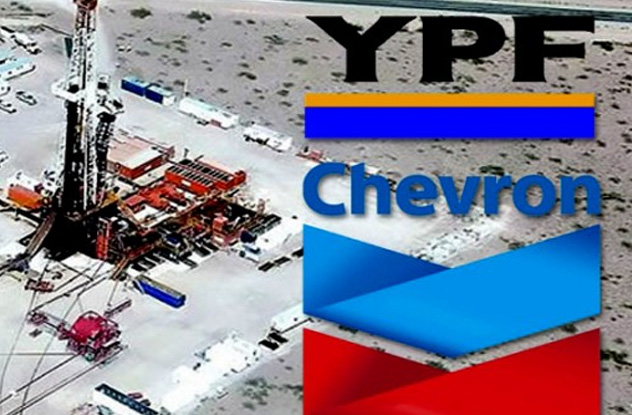 Argentina does not exactly have a history of welcoming foreign investors, particularly those whose environmental record is spotty. Despite this, Argentina and Chevron found themselves aligned due to the presence of potentially rich oil reserves in a field called Vaca Muerte.

Argentina’s past relations with foreign investors was not the only reason that the political alliance seemed odd, as Chevron was still locked in a dispute with Ecuador, an Argentinian ally, over alleged damages to the Amazon rain forest due to oil pollution. The dispute was such that Chevron’s asset were frozen for several months, but the chance of a big payoff was so great the Chevron chose to expand in Argentina nonetheless.

The fracking processes used by Chevron had many Argentinians up in arms as well, causing heated demonstrations. Police used tear gas and rubber bullets to control protesters. Argentina’s president, Cristina Fernandez de Kirchner, went ahead with the fracking despite opposition from both her critics and her supporters. Kirchner persisted largely due to the country’s financial crisis and the hope of a significant windfall from the Vaca Muerte field. The alliance was ultimately successful, as a spokesman with Chevron referred to the Vaca Muerte field as the equivalent of Argentina winning the “geological lottery.”