Why should our solar system’s planets get all the attention? There are things about our own Moon that we either still don’t know or have just learned about, half a century after 12 human beings walked on it.

Other moons may harbor life or contain evidence about incredibly violent events that have changed the very nature of the solar system. A few moons are just plain spectacular, like Charon. What’s Charon, you ask? 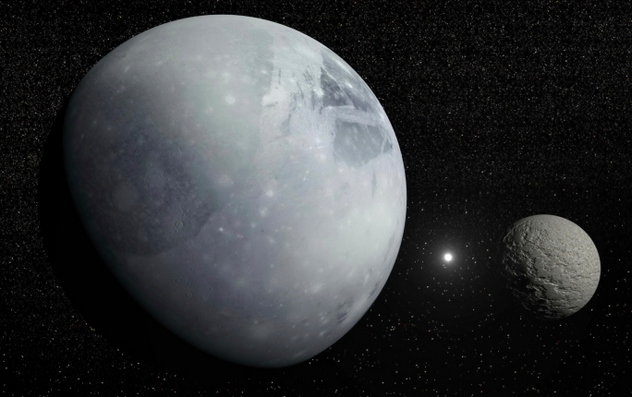 Pluto and its biggest moon, Charon, are locked together in a gravity dance where they always face each other. So what? Well, it means that an astronaut on Pluto is either not going to see Charon at all or will see it overhead constantly.

Our Moon is locked to Earth by gravity, too, and that’s why we never see its far side. The difference is that Earth is much bigger than the Moon, so only the Moon is locked. Pluto and Charon are almost the same size, so each is locked to the other. One weird effect of this is that if you’re on the far side of Pluto, you never see Charon. On the near side, it looks about seven times as big as our Moon does and just hangs there in the sky, cycling through its phases in a little over six days.

9Our Moon Is Only Mostly Dead

ScienceCasts: Young Volcanoes on the Moon

Part of the thrill of the Apollo missions was that people were setting foot on an untouched lunar surface that had been cold and dead for three or four billion years. Apollo 15 and 17 did find unusually high heat readings, but that could have been instrument error. Nobody suspected active volcanoes. But it turns out that the dinosaurs, some 70 million years ago—as well as later Earth life like elephants and horses that first appeared 33 million years ago—probably watched glowing lava flows on the Moon. Someday, we might see one, too.

Apollo 15 astronauts photographed irregular rocky patches on the basalt mare plains. Nobody had a clue what they were until better images were available, beginning in 2009. Since then, scientists have realized that these irregular mare patches (IMPs) are surprisingly young volcanoes. So far, 70 IMPs have been found. This discovery means that the Moon’s interior stayed hot much longer than scientists first believed. It might even still be partly molten.

8The Moon Mirrors Life On Earth

Earthshine Sheds Light on Moon, and Our Planet

There is another light we see on the Moon: that faint glow on the unlit part of a crescent moon. It’s called “earthshine,” because it comes from the light of a full Earth in the Moon’s sky, shining on the moonscape. Scientists have run this earthshine through a spectrometer and found “biosignatures” from our atmosphere and plants. Biosignatures are unique spikes on the spectrum of earthshine that are caused by sunlight reflecting off Earth’s vegetation, oceans, and cloud cover. Yes, NASA spacecraft have confirmed there is life on Earth, and it wasn’t a waste of taxpayer money.

Now that they know what to look for, astronomers can try to find biosignatures in the spectrum of planetshine from distant solar systems. They’re not ready to contact ET just yet, but the discovery that earthshine is a spectral mirror of life is a major step in that direction.

7Venus Can Shed Light On Our Moon’s Origin 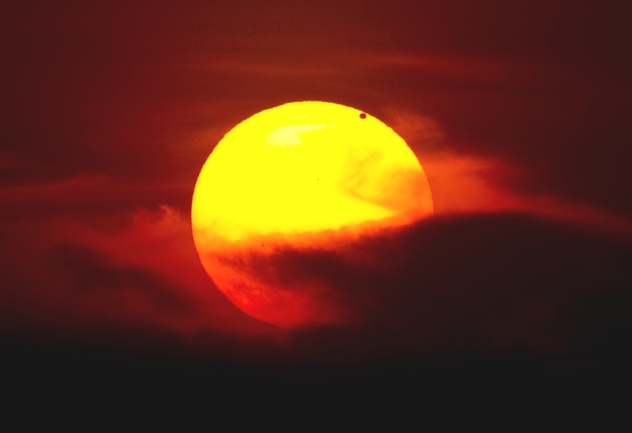 Many experts say the Moon formed when an object about the size of Mars whacked it out of the Earth during the solar system’s early days. That’s a good explanation for why the Moon’s chemistry is so much like Earth’s, but it doesn’t satisfy some scientists. At a recent meeting about the origin of the Moon, they kept asking, “What’s Venus made out of?” It’s a good question. Venus and Earth formed close to each other in the big dust cloud that birthed our solar system. They are also about the same size, so why does Earth have a Moon and Venus doesn’t?

No one knows. All of our information about Venus is from either pictures or data collected by orbiting spacecraft. Surface samples, which we don’t have, are the only way to tell if our sister planet is chemically different from Earth and the Moon (in which case, the impact theory about the Moon is probably right). If, instead, Venus also has geochemistry like Earth’s, where did the Moon come from . . . Venus or Earth?

6Irregular Moons Show That Giant Planets May Have Changed Orbits

Astronomers call a moon like ours “regular,” because its orbit is generally circular and doesn’t have a steep angle. There are also some “irregular” moons around the giant planets—Jupiter, Saturn, Uranus, and Neptune—with orbits that have weird paths and angles.

With all that going on, some moons probably ended up with their own little moonlets, right? Well, not for long . . .

5Moons Can Have Moons (Technically)

Can Moons Have Moons?

At least one asteroid has a moon. It shouldn’t. The Sun is so much bigger, so it should easily steal the asteroid’s moon. However, that asteroid is far enough away from the Sun for something called a “Hill sphere” to take effect. A Hill sphere is where gravity from an object (let’s call it Earth) is stronger than gravity from a bigger but more distant object (the Sun). Our Moon orbits Earth instead of the Sun because of Earth’s Hill sphere.

Theoretically, any moon that’s far enough away from its planet can have Hill-space moonlets, but none have ever been found. Maybe we just haven’t seen any yet. However, other forces are at work, like tiny variations in gravity called “tidal forces” that make moonlets either crash or break apart. So maybe there simply aren’t any moonlets left anymore. 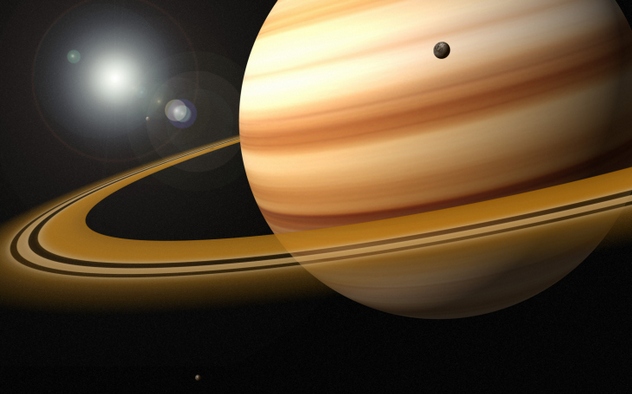 Saturn is the only planet in our solar system to have moons hiding in another moon’s orbit. Tethys and Dione aren’t alone as they zip around Saturn. About 60 degrees ahead and behind each one is another, much smaller moon, orbiting Saturn in the same path. That’s right—two orbital paths, with three moons in each path.

This effect has nothing to do with Hill spaces. There are stable Lagrangian points 60 degrees ahead of and behind Tethys and Dione. These points are where gravitational pull inward exactly matches the outward centripetal force on the little Trojan moon that’s going way too fast for its weight class. So what happened to other moons that weren’t in a stable Lagrangian point? They probably escaped or collided with each other, adding material to Saturn’s rings.

3Ganymede Has A ‘Club Sandwich’ Ocean Structure That Could Harbor Life

In the 1990s, NASA’s Galileo spacecraft visited Jupiter and found evidence that an extremely salty ocean, hundreds of kilometers deep, probably sits under the icy surface of Ganymede and a few other Jovian moons. At first, scientists thought that intense cold and high pressure at the bottom of Ganymede’s ocean froze the water there, making it an unlikely place to find life.

According to a new theory, Ganymede’s ocean is actually a “club sandwich” of up to three ice layers, each alternating with water. The bottom layer is very salty water. Extremophiles are more likely to live in water than in ice, and since there could be hydrothermal vents down there, similar to those found on Earth, this new model improves the chances that Ganymede might harbor life.

In 2022, the European Space Agency plans to launch a spacecraft that will study Ganymede and perhaps even land on it.

As it turns out, George Carlin was wrong: Nature doesn’t need humans to make plastic. Saturn’s biggest moon is already working on it.

Titan is the only moon in the solar system with a significant atmosphere. It’s smoggy there, and the weather is terrible. It rains methane and other hydrocarbons. If scientists are right that this moon’s atmosphere is like the one Earth used to have, things have really improved here at home. When sunlight hits hydrocarbons in Titan’s atmosphere, they crack apart and form other molecules. The process is similar to the chemical cracking we must do to hydrocarbons here on Earth to get raw ingredients for plastic. In fact, it’s so similar that NASA’s Cassini spacecraft found propylene and ethane on Titan. These are exactly what plastics manufacturers use to make polypropylene and polyethylene.

1There May Be Life On Europa

Europa is another one of those icy Jovian moons that probably has a subsurface ocean. It doesn’t look like Ganymede, though. It has orange-brown material covering much of its surface, as well as white ice. NASA labels Europa’s orange-brown stuff “non-ice components,” because no one knows for sure what it is. However, a NASA astrogeologist has used infrared light to compare the orange-brown material with extreme bacteria here on Earth. He says he wasn’t looking for anything in particular and was very surprised to find a close, though not perfect, match.

No, life hasn’t been definitely discovered on Europa. The only way to tell for sure is with samples. Europa is very far away and very dangerous to visit because of radiation from nearby Jupiter. Nonetheless, NASA is considering a Europa Clipper mission, even if it means shutting down a lunar orbiter as well as Opportunity—one of the two Mars rovers.

Because finding extraterrestrial life is that important.

Thanks for your interest! Barb likes to blog about Earth science and the American Civil War at bjdeming.com.